Analog vs Digital: The Psychology & Science Behind the Most Contentious Debate in Audio, Part 1

Language
It's a question that will probably never go away: Is analog or digital better for musicians and producers? Shane Berry looks at the science and psychology behind this contentious debate.

Asking which is "better", analog or digital, is a false dichotomy, it is exactly the same as asking whether a Fender Rhodes is better than a Yamaha DX7. Like both legendary keyboards, analog and digital recording media have their merits and demerits, each has a particular character, and it is up to the artist and audio engineer to decide which character best suits the needs of the project at hand.

Why then does this remain such a contentious issue, an ongoing battle for one medium over the other?

Even two different Class A analog desks will sound different from one another and, like the Fender/DX7 example above, the only difference comes down to subjective taste, a preference for one over the other.

These preferences always come down to perceptions.

It is these perceptions that are interesting. What lies behind them? What shapes them?

Let's look at the manufactured (and symbiotic) battle between Coke and Pepsi for clues. The allegory is drawn for several reasons. First, at a certain level, there is no difference between the two, second it is primarily perceptions of the final product that influence the choice of one over the other, and cultural, societal, psychological and neurological biases play heavily into these choices.

The same goes for Pepsi and Coke.

First, let's look at how easy it is to fool the brain into perceiving something that may or may not actually exist.

Research into audio/visual confirmation bias and the power of external forces to curb choices is well documented. The human brain is exceedingly easy to fool with certain stimuli. Simple and explicable optical illusions are impossible to not see even when we are aware that the brain is being fooled. Of course we are more often fooled by what we think we know—adding darker food coloring to one of two otherwise identical glasses of orange juice will change how consumers perceive their respective sweetness, even if their is no actual difference [1], and simply watching a video of a man mouthing the labiodental frictave "VA" whilst hearing a recording of him saying a bilabial voiced "BA" tricks us into hearing the former unless we close our eyes. The power of visual stimuli to override aural stimuli is clearly demonstrated by this phenomenon—The McGurk Effect [2], but even the ears alone can be fooled into hearing something that just isn't there with audio illusions such as the Shepard Tone (a tone that appears to continually ascend or descend in Pitch) or Diana Deutsch's Tritone Paradox [3] of musical patterns that sound like they are either ascending or descending depending on the key they are played in (as opposed to music patterns that merely transpose themselves recognizably to other keys). 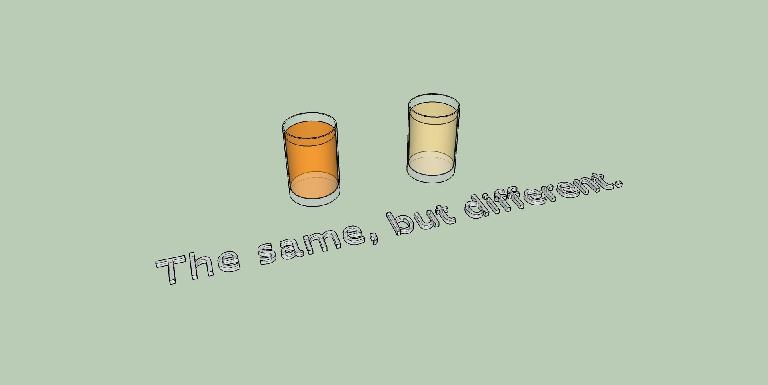 Simply changing the color of a drink can alter how it tastes.

The Pepsi/Coke rivalry has generated a wealth of interesting studies that show how much certain patterns of thoughts or beliefs play in the perception of an object, idea or sense. These influences are far more subtle and insidious than a blatant illusion—they are neurophysiological reactions to stimuli that override the chemistry of the brain to alter the way we think (and by extension) perceive what we are experiencing, as Lone Frank points out in his Scientific American article, How the Brain Reveals Why We Buy: "In the next series of experiments the subjects tasted colas with visible labels. When the research subjects knew which brown liquid was which, almost all of them suddenly preferred Coca-Cola. They were convinced that the taste of Coca-Cola was far superior to Pepsi. This shift in attitude followed an important change in the brain–this time, the medial prefrontal cortex went into action. The cerebral cortex intervened with its higher cognitive processes and triumphed over the immediate feeling of reward that was evoked by the taste impression." [4]

Furthermore in a Slate article about the dominance of Coca Cola in the world market: "When Read Montague of Baylor College Medicine performed a version of the Pepsi Challenge with subjects hooked up to an fMRI machine, he found something interesting. In blind taste tests, most people preferred Pepsi, and Pepsi was associated with a higher level of activity in an area of the brain known as the ventral putamen, which helps us evaluate different flavors. By contrast, in a nonblind test, coke was more popular, and was also associated with increased activity in the medial prefrontal cortex. Montague’s interpretation: This prefrontal activity represented the higher-thinking functions of the brain associating the soda with ad campaigns and, in effect, overriding the taste buds." [5]

The science is very clear, prejudices clearly affect results, but often not for the reasons first supposed. In blind tests done with wine, people invariably pick sweeter yields, it is a biological, quite possibility evolutionary, reaction to sugar, and Pepsi knows this. In side by side blind taste tests Pepsi almost always comes out on top—but is largely conceded that Pepsi is the sweeter of the two colas and herein lies it own downfall. The test Pepsi doesn't want to advertise is the one where people get to take home a case of each and then drink those for a week or two. Over time Coca-Cola always wins. Sweetness, it turns out, is only a short term winner. In the long run customers prefer the less sweet of the two colas. [6]

So is the Digital vs Analog debate in similar territory? Is it equivalent to Pepsi vs Coca-Cola and does Digital Audio suffer from what has come to be known as the "Pepsi Paradox"?

Digital is Pepsi in all of these regards, despite now dominating the audio market; it is the young upstart (in ad lingo it is a "Brand Challenger"); it is still perceived to be not quite the same as the "original"; and it seems as if it will always play second fiddle to analog. NO MATTER WHAT IMPROVEMENTS COME ALONG—it’s just not the real thing.

In the next article we’ll look at the quantitative differences between analog and digital audio, and show why they are perceived differently, both scientifically and culturally.