Reverb is a vital component of mixing but it's easy to overuse. Here, Joe Albano shares 5 pro tips to help you get it right.

Reverb is one of the key elements of any mix, adding depth and air to what can often be overly-dry close-miked studio recordings and virtual instruments. But as with any mixing tool, if it’s over-used or applied carelessly, reverb can also have a negative impact on a mix, reducing overall clarity. Here are a few suggestions for how to get the best—and cleanest—results using reverb in the mix.

There’s nothing like the sound of a long, lush reverb tail billowing out dramatically to add that sense of air to an instrument or voice, taking the listener out of the playback room into a richer virtual environment. But long, rich reverb can often be the enemy of clarity and detail in a mix, and when those aspects are key to the musical arrangement, sometimes less is more.

When a musical arrangement has a lot of complex, overlaid parts and/or when there are quick rhythms that need to come through in detail, a long reverb tail can potentially be detrimental, smearing that detail as the tail from each note overlaps the next note(s), making attacks less distinct, and potentially causing quieter background parts to be lost in the clutter. Of course, reducing the level of the reverb vis-á-vis the level of the dry signal(s) can help retain clarity, but this may make the mix sound too dry, robbing it of depth and the sense of envelopment that comes with reverb.

Pretty much all reverbs—even convolution reverbs—include this control; some  may even offer options to manually shape the decay via a decay envelope. It’s also often possible to set different decay times for high and low frequencies (see below).

Depending on the arrangement and the music (rhythm, tempo), a Reverb Time of around 1 second is a good starting point. Many reverb plug-ins have presets that show off the quality of the reverb with dramatic 3-4 second tails, but this is likely to be too much for many situations. Even larger halls—suitable for less-percussive orchestral music—often have surprisingly modest reverb Times; Carnegie Hall—known not only for its lush sound, but also for its enviable clarity—features an RT60 of around 1.8 sec or so.

For more rhythmic pop arrangements, a reverb time between .75 sec and 1 sec will often provide a decent sense of size and depth without muddying things up. Some of the more sophisticated reverbs (i.e. Lexicon) have included dynamic decay times—longer when the incoming signal pauses, to let the rich verb shine, but shorter while the arrangement is playing busily, for the sake of clarity. And of course decay can always be automated in the DAW, another way to achieve the best of both worlds.

Another way to potentially preserve greater clarity is to increase the Initial Reflection parameter—again, this option is present is most all reverbs, including convolution reverbs. The Initial Reflection is the time between the dry signal and the first reflection of the reverberant sound field. In real spaces this is typically longer in larger rooms, and this parameter can be used to suggest size.

But it can also be used to enhance clarity of the dry signal. A longer Initial Reflection value can delay the onset of the reverberation until the dry signal has completed (more of) its own decay—this gets the reverb out from under the dry signal, which can be helpful in maintaining clarity. With percussive signals there’s a risk of adding undesirable clatter, but with signals that benefit from a little echo, it can be quite effective in a subtle way. Increasing the Initial Reflection time is commonly done with vocals, where it may add a slight echo—usually a welcome effect on voice—and help to preserve intelligibility.

As with pretty much every element of a mix, the tone of the Reverb signal can be modified with EQ. A rich, warm reverb tone may sound great on snare hits and the like, but that same warmth can potentially muddy up the overall arrangement—especially if the tracks themselves have a lot of low and low-mid energy, which will be accentuated and extended.

Just as with individual instruments, the tone that sounds best in isolation may not work as well in context of a full, busy arrangement. Just as the tone of some instruments may need to be thinned out so they don't step on each other too much in the full mix, reducing the lows and mids of the reverb signal can help avoid potential muddiness and over-thickening of the sound.

The simplest way to go about this is to dial up static EQ—again, a little less in the lows and lower-mids, and possibly a little more in the upper-mids can help to keep the mix a little more clear and open. A more sophisticated approach might be possible of the reverb has options for different decay times at different frequencies, as I briefly mentioned above. In a physical space, longer low-frequency decay is more natural, but in a busy mix, sometimes setting a shorter low-frequency reverb time can help minimize the potential muddying effect of low-frequency reverb, while still maintaining enough warmth in the reverb signal—the lows are still there, as opposed to being reduced or cut out with a static EQ, but they don’t linger long enough to induce excessive muddiness.

4. Match The Reverb To The Part

Is a live concert, of course, all the instruments and vocals are subject to the same reverb. And this is fine—the reverb envelopes the audience three-dimensionally, with much of it arriving at the listeners’ ears from the sides and the rear of the room. Since the original dry sound is coming from the front—the stage—our hearing system gives it priority, allowing for good clarity even in the presence of strong room tone.

But in stereo playback the reverb also comes from the front of the room, and so is more prone to masking and muddying effects. Having the same reverb on everything typically doesn’t work out so well; that’s why mixers commonly avoid adding reverb—or use much less—on instruments like bass, which are more prone to creating dense reverb mud.

But thanks to the modern DAW and the power of modern computers, mixers can take the idea of selective reverb quite a bit further. Not only can they add more or less of the same reverb to different tracks—as best suits the arrangement and the mix—they can also use different reverbs on different instruments and voices. 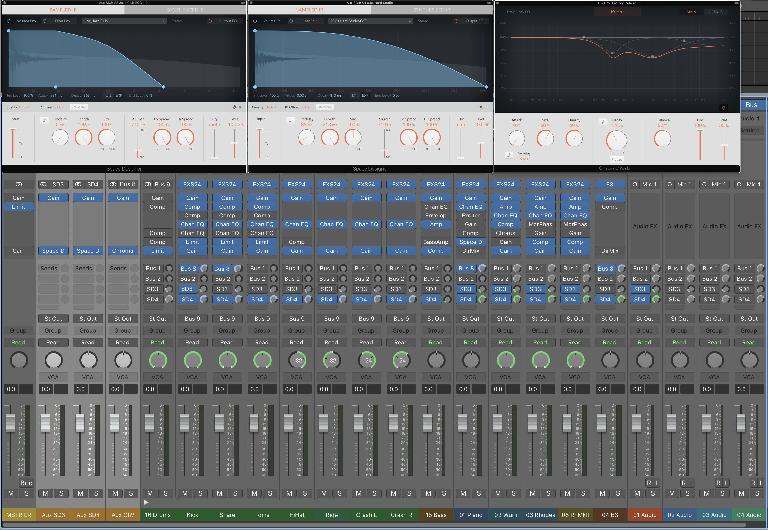 A mix with several reverbs in use

There are various types of reverbs available as options in any modern reverb plug-in or device. A Hall might suit long sustaining sources like orchestral strings or choirs, but sound too echoey on busy percussion parts; a nice tight mechanical Plate—with its immediate attack—might have a great, explosive response on drums, but lack the desired depth for some other instruments; the boingy sound of a traditional mechanical Spring reverb might be the perfect complement for an electric guitar riff, but sound too metallic on other sources; and different Rooms might sound better on various instruments, depending on the particulars—tonal balance, attack and decay time—of both the instruments and the rooms.

While everybody has to be in the same room live, there’s no reason not to instantiate multiple reverbs in a mix, and route different tracks to the most appropriate/effective verb for each instrument and voice. Optimizing the reverb for individual parts or groups of similar parts can go a long way to achieving a mix with the best balance of depth/richness and clarity. Sometimes, if desired, the mixer may send just a little bit of all the tracks to an additional general-purpose reverb, to help unify them with a subtle sense of shared space.

Individual tracks can also be routed to more than one reverb—this is a popular application, employed to adjust the depth of various elements in a mix while still providing the unifying sense of everybody playing together in the same space. It’s not unusual for a mixer to set up two or more reverbs intended to be combined in different balances on different tracks. A common approach might be to have one reverb provide a smaller, shorter room, and another offer a larger, longer room. By sending different amounts of individual tracks to both, the mixer can dial up a subtle sense of depth, pushing instruments further back in the virtual soundstage or pulling them in closer. 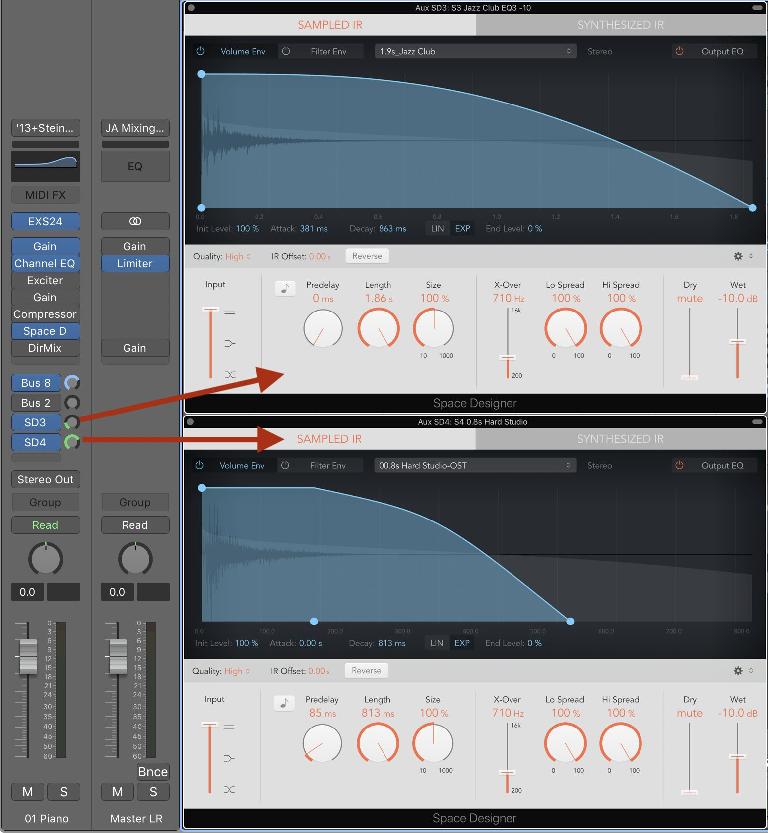 Sometimes convolution reverbs provide IRs (Impulse Responses, their source recordings of real spaces) recorded at different distances from the stage—when these are used in combination as described above, the mixer can subtly place various tracks at the front or rear of the virtual soundstage.

As I’ve said, this sense of depth is subtle, but it can be helpful in creating a more three-dimensional, more enveloping sense of space for the mix, while still keeping the “players” in the same virtual room.

By carefully applying reverb and taking advantage of the flexibility provided by modern DAWs, mixers can achieve the best balance between richness and depth, and clarity and intelligibility. Optimizing reverb usage creatively for the arrangement and the mix can provide the icing on the cake, taking the mix to the next level, and greatly enhancing the experience for listeners.