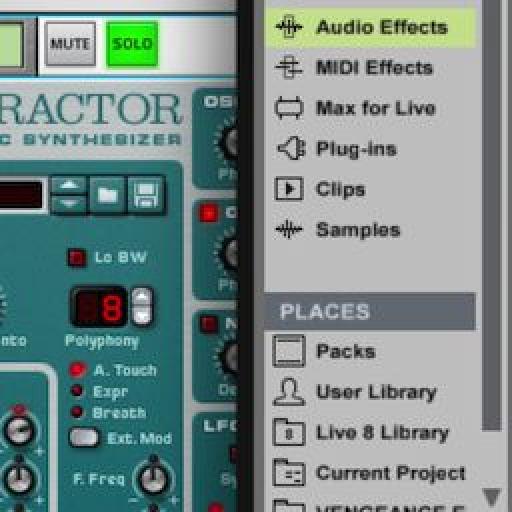 Language
Are Reason & Ableton Live a musician's match made in heaven? Quite possibly! In this tutorial, G. W. Childs shows how to rewire both DAWs to get them working in unison together.

Whenever I can, I mention either Reason or Ableton Live to other musicians I meet in passing. Both platforms tend to inspire a massive amount of enthusiasm. And they should... they are incredible packages.

You may, or may not be surprised to know that both Ableton Live and Reason are highly complimentary. Actually, for a long time, the two together were known as the 'killer app'. And, while both packages have grown and have both added incredible features, in my opinion, together, they still are the killer app.

Why? Well, even though Reason now can control external MIDI instruments, and has audio, it still has a thing or two to learn about audio looping, and the wanton destruction that Ableton inspires. Live, on the other hand, now has a large amount of instruments and with Max for Live, it can be pretty much do anything that Reason does. But, for ease of use, incredible control of signal flow and fun, it could still benefit from learning a thing from Reason.

Regardless, we don't really want either program to become the other. They are beautiful just the way they are. So, why not use them together? It's actually not as hard as you think! Through the use of Rewire, a protocol that Propellerheads created way back in the '90s, it's incredibly easy to use Live and Reason together and have audio, sync and full control of both software packages at once.

Why would this be a good thing to do? Well, Ableton Live is, at its heart, a loop creation powerhouse. Reason, at its heart is a well-polished virtual studio of classic instruments. Through the use of Rewire, it's easy to track, and record tons of random synth blurbs, drum beats and more from Reason into Ableton Live. And, because you can record in Live what you're doing in Reason in real time, it's incredibly easy to have an amazing session all by yourself.

Before beginning this exercise, it's important to note one thing about Rewire. For the Rewire protocol to work, there needs to be a Host, the app that takes in all the audio, and gives out sync, and MIDI. Then, there needs to be a Slave, the app that is locked to the sync of the host and has audio being piped in to the host application, as well as being able to receive MIDI. In this demonstration, Ableton is the host, because Reason is not capable (at the moment) of being a Host. It's always the slave.

So, to start this off, fire up Ableton Live. Once Live is fully loaded, launch Reason. When you launch both applications in this order, Rewire is automatically put into action. You'll also have visual confirmation of this, if you look towards the Reason Hardware Interface. The active audio driver will list Rewire Slave Mode.

With both applications running in Rewire, now, it's time to get moving. For the sake of this exercise, let's just set up one audio connection, with a few instruments, so you can get an idea.

In Reason, create a Subtractor, hooked up to a Matrix. Also, create a Redrum drum machine. If you want to substitute an instrument, or add some, it's fine. Have fun and enjoy. 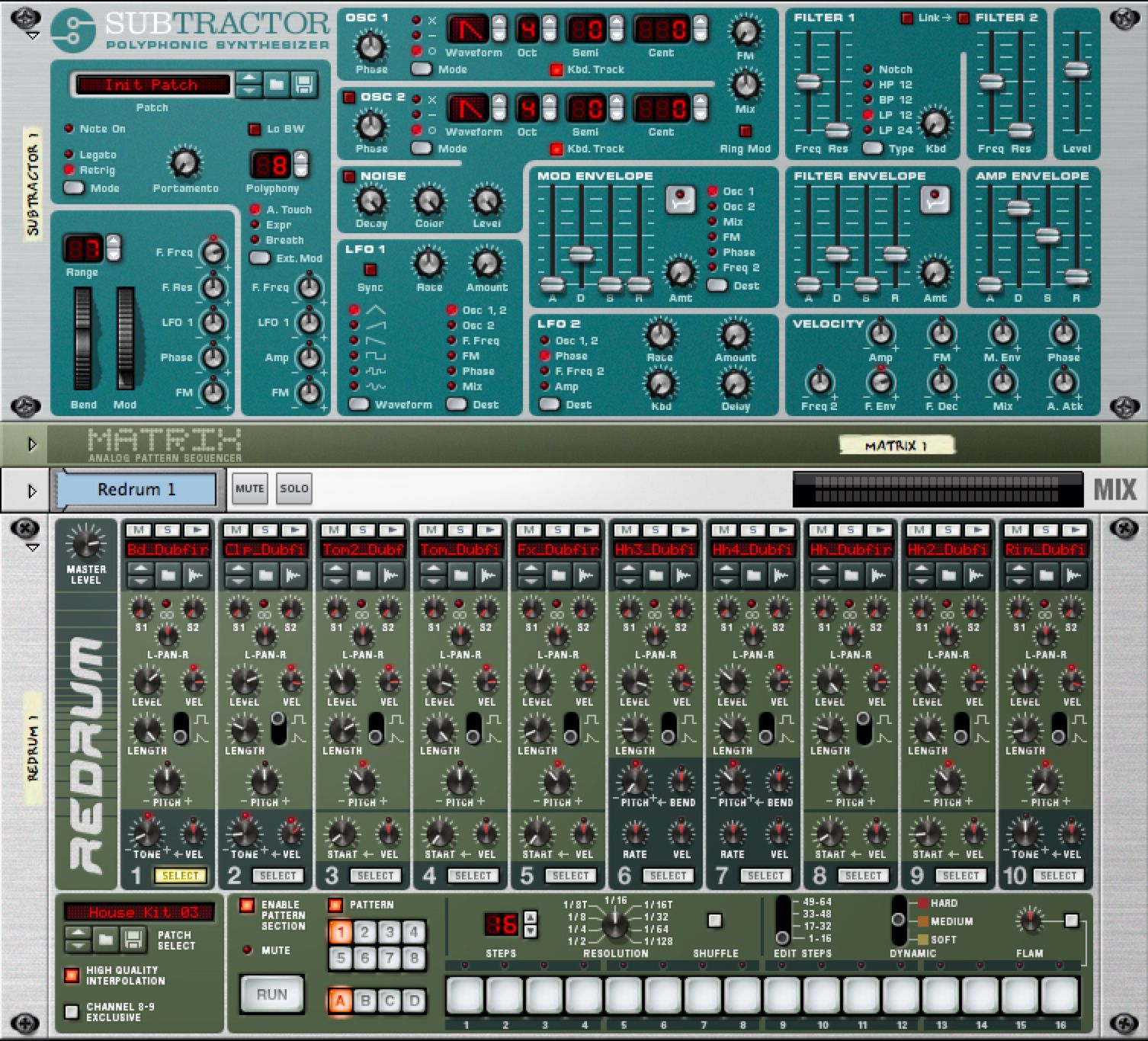 Now, if you try to start running either of the pattern-based instrument setups in Reason, you'll notice that there is no sound, at all. This is because we need to get some audio coming from Reason to Ableton Live. So, use Command-Tab to shift over to Ableton Live.

Once you're there, either locate, or create an empty audio track. Within this audio track, set the Audio From drop-down box to Reason. By default, the Master Left and Right out of Reason will be assigned. But, note that you can create multiple audio tracks that take individual Reason outputs. This makes it a dream for tracking full Reason projects, and so on. If you notice, in the figure below, there are actually several outputs that can be utilized from Reason. Use the Hardware Interface backside to make this happen. 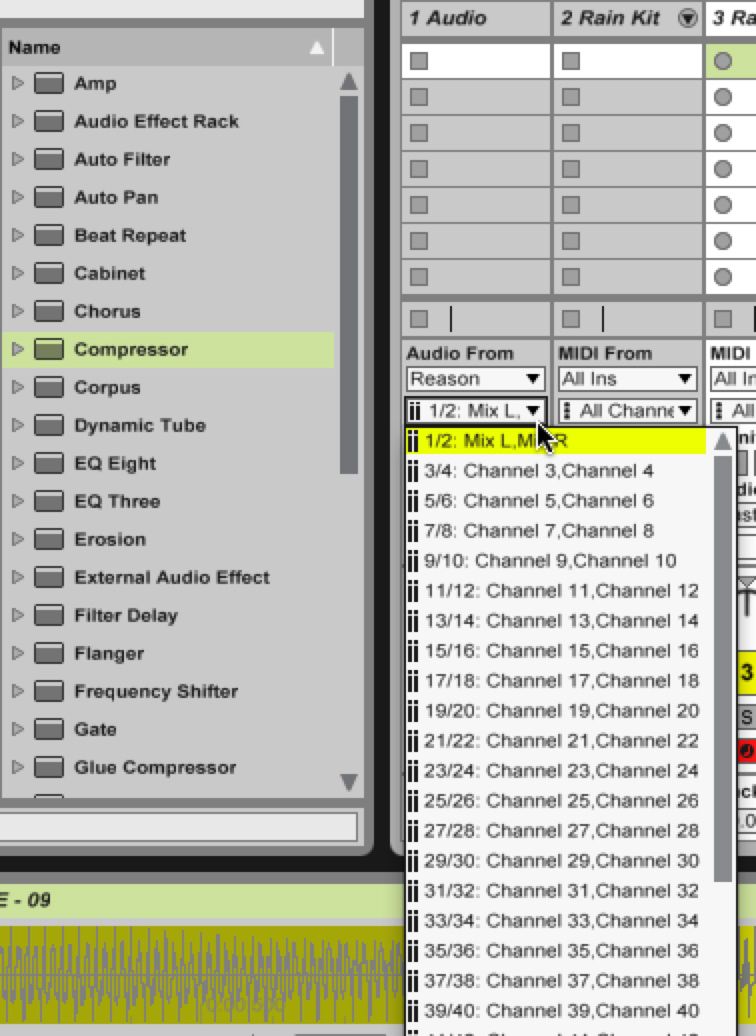 Now, the only thing left is to put the Monitor Mode of Live into the In position. This will keep the input active, regardless of what else you're doing in Live, while Reason is running.

With both apps running smooth now, let's investigate some of the possibilities here. You'll note that if you change the tempo of Live or Reason, the tempo will be updated seamlessly in the other application. Give it a try... 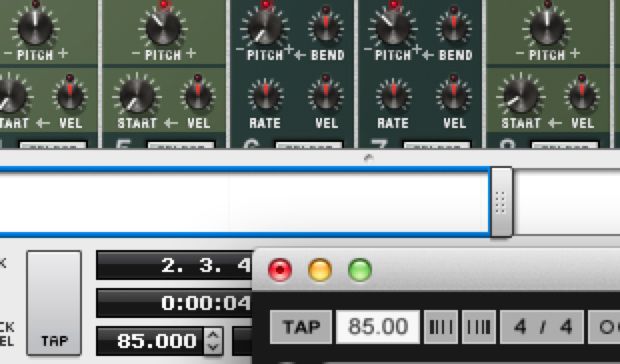 Having this tight of sync is awesome, because you can always rely on whatever you record from Reason to Live to be perfectly in sync. This is very helpful for creating new loops, and just making your project polished.

Now would be a great time to program your Matrix and Redrum. Get a beat going, get a melody going. While you're doing that, you might also consider bringing up some loops in Ableton Live. Oh, and here's where you can have some real fun. Once you get a drum loop you like, solo it in Reason, and then record it as a loop in Ableton, by clicking a clip record button! 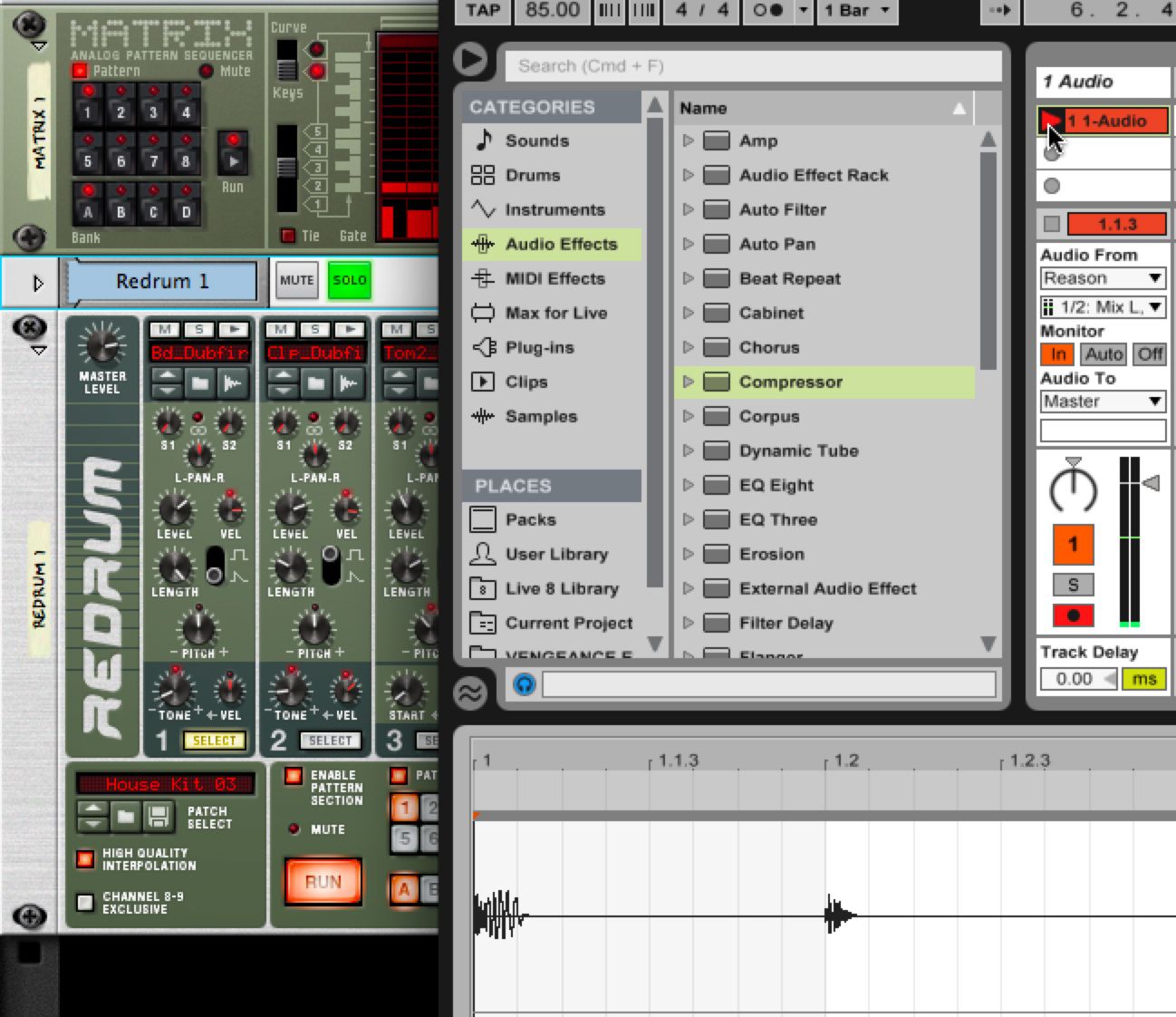 Once you get the Redrum loop, then un-solo it, then solo the Subtractor. Get the bass and drums separately. Note: You can also set up separate outputs from Reason too. Also, feel free to adjust the filter cutoff, and resonance. All of these tweaks will be recorded as audio in Live. Once you've recorded the loops you want from both the Redrum and the Subtractor, create a separate audio track and move the Subtractor, or Redrum clips to their own tracks so that you can hear them both. In fact, as you add more instruments in Reason, you can keep the original audio track around that has audio piping from Reason, and just migrate clips to other tracks. This is a quick way to build up a very nice arrangement in Ableton Live of nothing but Reason audio clips. 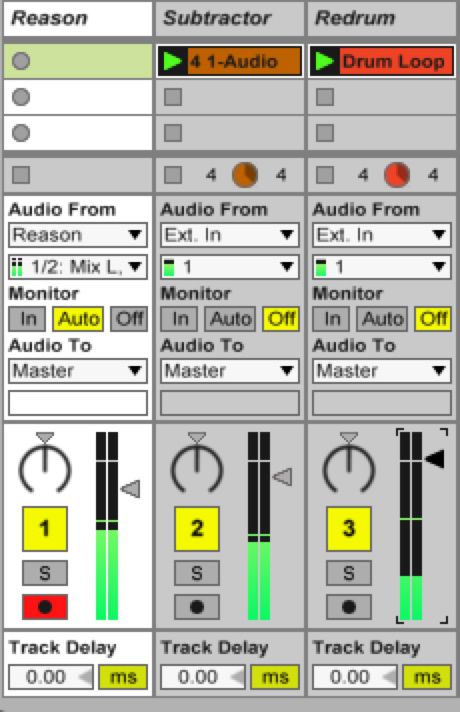 I hope you give this a shot and spend some time with it. Personally, I love working like this, between two applications, because it gives me access, in a sense, to two different mindsets towards making music. And, I get tons of different types of sounds. And, with the ability to record audio in real time, there's a ton of possibilities for inspiration. And, imagine what happens if you add in effects!

spencer
I use Reason and Ableton Live together.Just awesome!

Another great article by G.W

John Ghadimi
This is a great article showing the master/slave relationship between Live/Reason, but how does the opposite relationship work? Would love some insights on how to slave Live to Reason (therefore getting access to VST/AU instruments inside Reason)