2018 was a great year for hardware synths. Demand for hands-on music machines continues to grow year on year. Here's some of our favorite hardware synths released this year.

Here's some of our favorite hardware synths (including semi-modular) released or shipped during 2018… some we've reviewed exclusively, others we've got hands-on with and love for a number of reasons. There's analog, digital and hybrid and workstations here to enjoy (in no particular order), but we've decided not to include the Arturia DrumBrute Impact or Roland TR-8S drum machines for this list:

Behringer's new semi-modular analog monster synth, Neutron, is one of the most talked about synths of 2018 and it's already captured a lot of headlines and minds.

Listed at a jaw-dropping (in a good way) $299 USD, you might be forgiven for thinking this analog semi-modular synthesizer is lacking in some areas when compared to more expensive synths of similar spec. In our first week playing and testing (and playing some more) with the Neutron, we haven'hadn't found its achilles heel.

Instead we were captivated by its sounds, impressed by its ease of use, wide-eyed when it comes to the expandability with modular and eurorack synths via the patchbay, and quietly pleased with what appears to be a very well-built synthesizer. 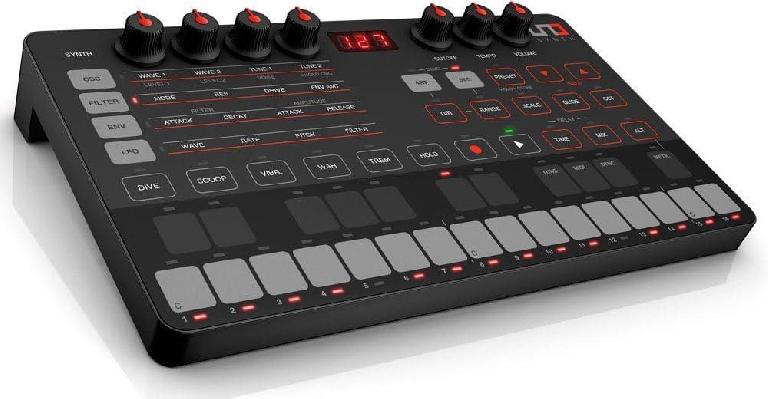 Even if the UNO was an extra 50€ more than its €200 price point it would be a good deal. While the plastic frame and knobs might not be to everyone’s taste a metal enclosure and Elektron-style buttons and Moog-style knobs would simply take the UNO into a different price range out of the reach of its intended audience.

Beginner and intermediate level synth enthusiasts are not going to be disappointed with UNO. There’s a wide palette of sound design possibilities, a useful built-in performance interface in the keyboard and sequencer, and it’s super handy to use on the move thanks to running on battery power and/or via USB direct to a computer, power adapter or portable battery. 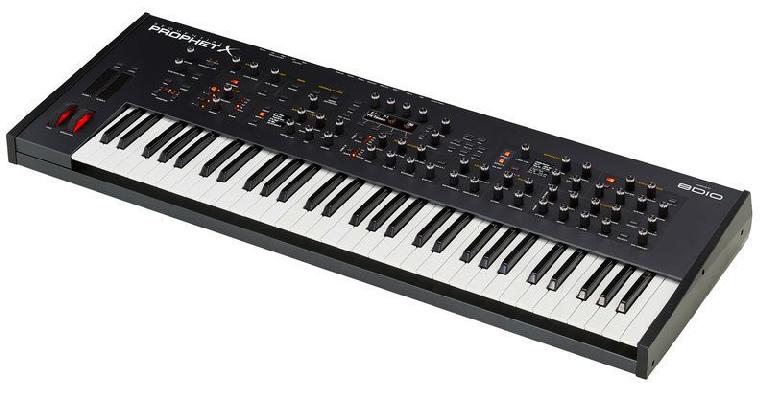 It's what's been on many people's synth wishlists for many years. The Prophet X is a Dave Smith Instruments synthesizer which gives you the ability to play samples through analog filters.

The Grandmother is a 2-oscillator monophonic semi-modular synth with a built-in arpeggiator, sequencer and spring reverb tank! The 2nd oscillator can be hard synced to the first and it also has Linear FM. There’s the classic Moog Ladder filter based on the 904A module and a standard ADSR section with the Sustain stage on a fader unlike the usual rotary dials. There’s also a very handy utilities section and an attenuator for processing voltages as well as a High Pass filter which needs to be patched in as it's not hard wired. There’s an LFO section that can be used to modulate the pitch of the oscillators, the filter cutoff or even the pulse width. The LFO has a dedicated Sample & Hold output available on a patch point.

It's a fantastic new addition to the semi-modular line from Moog. Ignoring the modular aspect, the synth works great as a keyboard performance synth but the patching aspect is where it truly shines and the Grandmother plays really well with the other synths like the Mother 32, DFAM or any other Eurorack-based system. 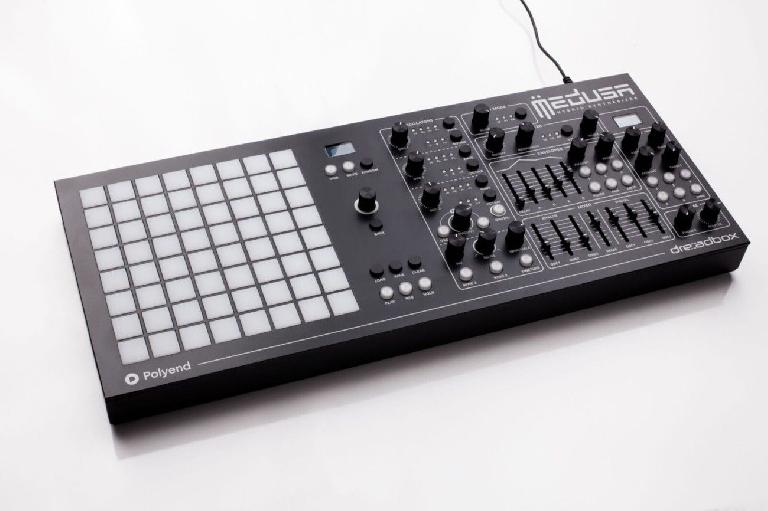 Medusa is an innovative new synth, the result of a collaboration between Dreadbox and PolyEnd. The core of what's new with Medusa is the GRID - a multi-mode expressive interface that can be used as an instrument, a sequencer, a modulator, or any combination of the above.

Medusa combines Dreadbox's great sounding analog synth capabilities with PolyEnd's experience in making SEQ - its powerful and yet easy to use sequencer.

They call it a Hybrid Synth and it is indeed a combination of a few things - it has both analog and digital oscillators, it’s both a monophonic and polyphonic or paraphonic depending on your definition of those terms, and of course its main feature, the grid makes it a hybrid synth/controller that does things very differently than other synths. 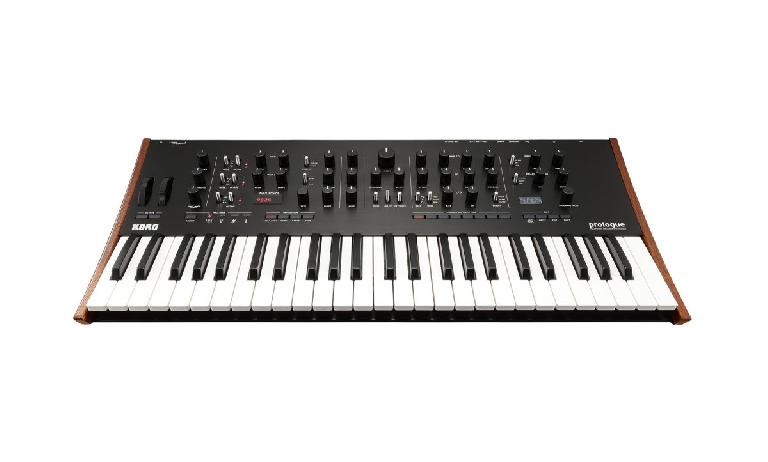 The Prologue is an astounding synth that has a distinct personality in the sound, regardless of the patch you are on, that is as charming as it is enticing. This is definitely a piece that is going to go down with many little gold awards all over it, as it can be both hard and beautiful all at once. It’s built like a tank, with wood panels on the side that constantly remind you you are playing a work of art. Sure, it’s a tool. But it’s a gorgeous tool and one that you’ll want to use, any chance you get. 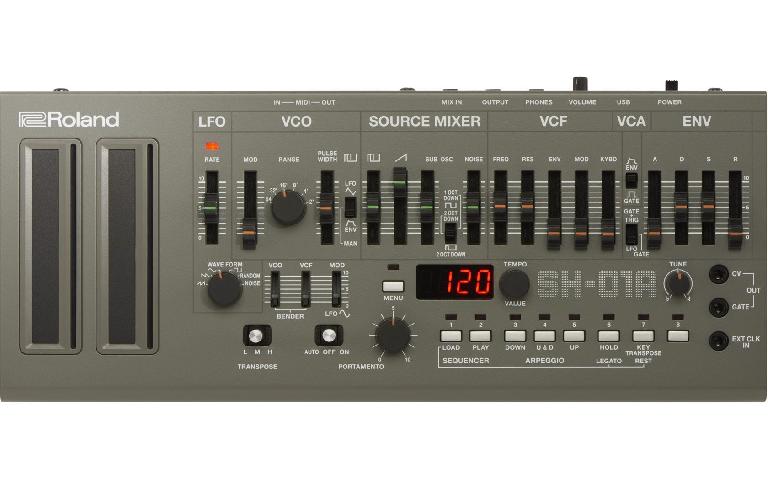 The Roland SH-01A is the next addition to the Boutique line of products. Like most of the other Boutique products this one too uses Roland’s Analog Circuit Behavior (ACB) technology. In other words it is a digital synth, but Roland’s modeling technology does an excellent job of representing the original SH-101 in this new digital form factor.

If you are familiar with the Boutique line, the SH-01A is not too different from the others. You get 4 voice polyphony, 1/8th inch ins and outs. The inputs can only be used to mix in another signal, it can’t be routed through the filter. It is battery powered but can also be USB powered. One excellent feature is that you can get the direct digital signal into a DAW so there's no need to hunt for 1/8” to 1/4” adapters. You get 5 pin din MIDI in and out. One surprise factor is the inclusion of analog CV & Gate outputs. The TB-03 is the only other Boutique synth that has such ports. It comes in 3 colors (grey, red and blue) just like the original. MiniBrute 2S is a sophisticated analog monosynth sharing the signal creation, sound shaping power, and modular capabilities also found in the newly announced MiniBrute 2. It replaces its keyboard with a set of performance pads as well as an advanced, intuitive and addictive, triple-layer sequencer with space to save up to 64 sequences, and the ability to chain them together to create flowing performances. Its multiple layers not only let you create melodic sequences, but also create extra levels of parameter automation to really make your music come alive.

Announced mid-2018, the Modal Skulpt is a 32-oscillator portable polyphonic powerhouse of a synthesizer... in a really cute, small, robust package. Alongside its ridiculously affordable sub $300 / £250 price point Skulpt features 4 voices (with 32 oscillators), Mixer stage for osc levels along with FM, PWM, tuning and Ring Modulation options, Multi option Unison / spread to detune the 32 oscillators for a huge sound, an 8 slot modulation matrix, a real-time sequencer, arpeggiator, 16-key touch keyboard, MIDI DIN In and Out, a morphable resonant filter, and so, so much more. 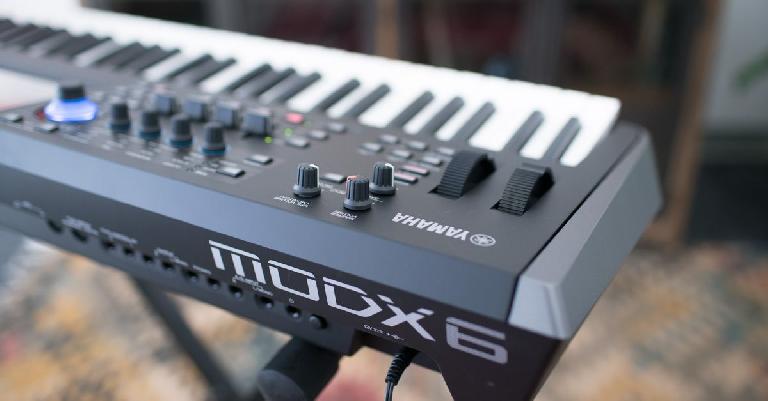 The MODX is a highly portable keyboard that uses the same sound engine as Yamaha’s flagship Montage synth. The AWM2 sample engine and FM-X synth engine are present in full force, as is full compatibility with just about everything Montage is compatible with. That part baffled me, because the MODX starts at a $1,300 price point. I can confirm - the very first thing I did was load up my favorite live set from my Montage, including the Chick Corea Rhodes expansion library, and all of the sounds played without a hitch and sounded exactly the same. The engine on this keyboard is just incredibly powerful and the sound design possibilities are staggering.

As a Montage user, our reviewer, Matt Vanacoro, was really floored. I love my Montage but I definitely reconsider bringing it on smaller gigs as I sometimes don’t want to put the ‘miles’ on my expensive flagship keyboard, and we all have those situations where we wish we had a portable and light keyboard that didn’t compromise on sound. That day has come, and the MODX is that keyboard. The sound engine you get at this price point is just insane, and they somehow managed to craft a really light keyboard that doesn’t feel (or sound) cheap. 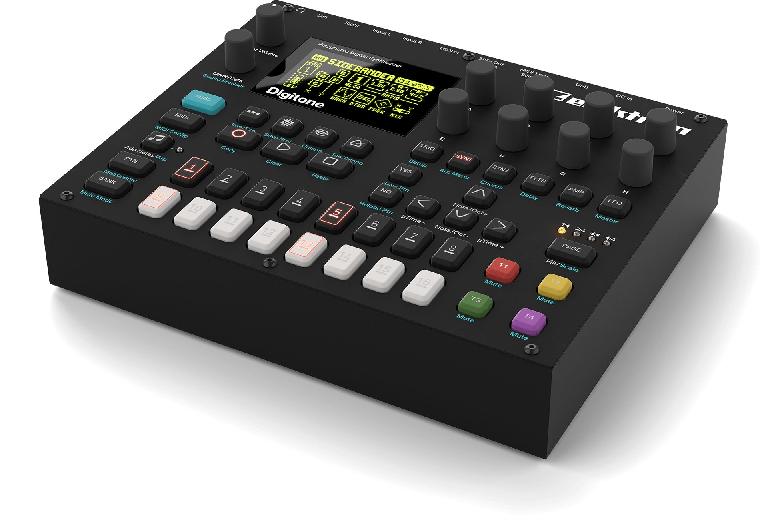 Digitone from Elektron was one of the standout announcements at NAMM. It's an 8-voice FM digital polyphonic synthesizer. It looks remarkably similar to the Digitakt drum computer and, despite having just 8-voices sounds like it has a lot more.

If you're interested in discovering more about Digitone, and its features including the envelopes, algorithms, controls, filters, AMP options, effects, LFOs, sequencing, parameter locks, Trig Conditions, Sound Locks, the arpeggiator, and MIDI tracks and FX, then this 23 minute video is exactly what you will enjoy.