Korg's new Prologue synth is a powerhouse of an instrument, capable of huge sounds and with some cool features including an active oscilloscope. G.W Childs couldn't wait to try it out.

Korg has been upping the bar over the last few years with new and sought after recreations of synths of old. In this review, I’d like to focus on a new synth from Korg, the Prologue 16. And believe me when I say this: this synth is its own thing.

Bling is something that I’ve grown to expect from Korg in recent years. The Prologue 16 does not disappoint- a tuning indicator progress bar slowly builds the tension as I longingly await the sound of this board. And then, once the first key is pressed not only do I hear a voice that is unique, I see it as well. The active, realtime oscilloscope is a feature that I’ve seen on many soft synths but I’ve never had the honor of working with a hardware synth that has this feature. I have to tell you, it’s more than just inspiring. Tweaking, hearing and seeing what your knob and switch settings are doing to the tone you’re producing is profound and educational for even someone like myself, who’s spent a lot of time with synths. But also as someone who has spent a lot of time with synths, I can tell you that the oscilloscope is just the tip of the iceberg. 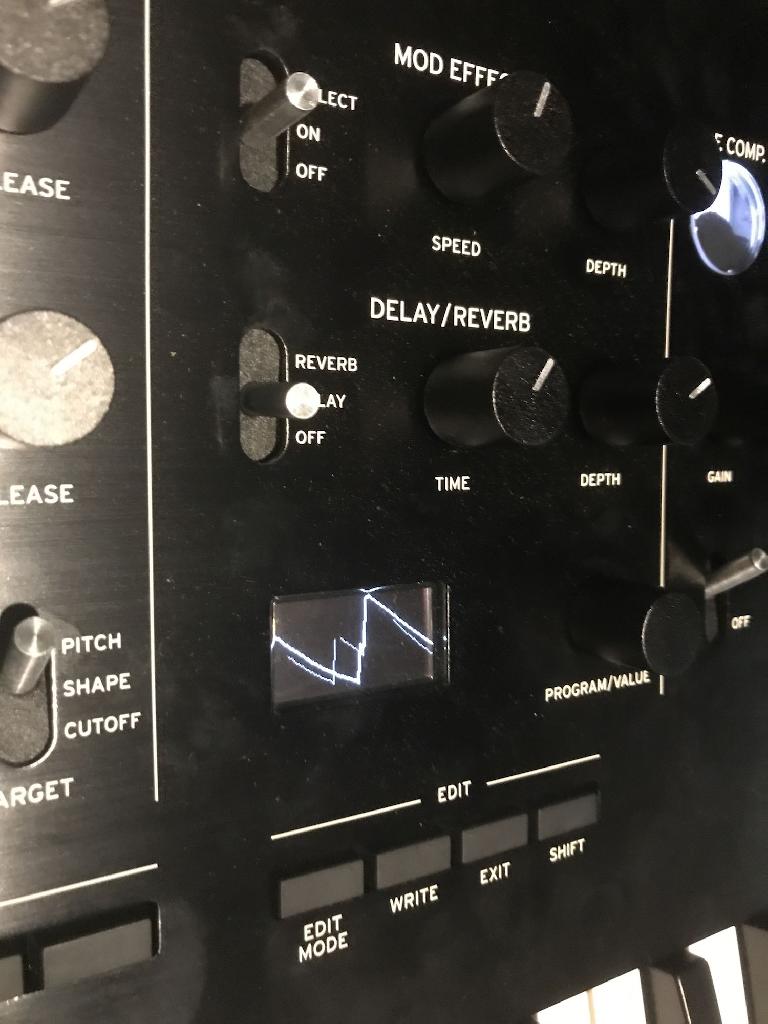 2 VCOs make up the bulk of the sonic beef, and they are as thick and as expressive as any other Korg synth we’ve seen in the past. However, Korg has thrown a curve ball here and has also added a digital Multi Engine as VCO3, which is a noise generator, a VPM/FM (Variable Phase Modulation Oscillator/ Frequency Modulation) oscillator, which has another 16 types of oscillators. And finally there’s a User Oscillator that allows one to upload up 16 of their own custom oscillators. Though don’t get too excited about this one yet as in order to upload your own Oscillators you’ll need the librarian software for this to take place, and it’s not available, yet. However, there is an included Sub oscillator that can be used as a secondary timbre in either a split key, or layered configuration across the main keyboard adding even more bulk, bass and power to an already gigantic sound. 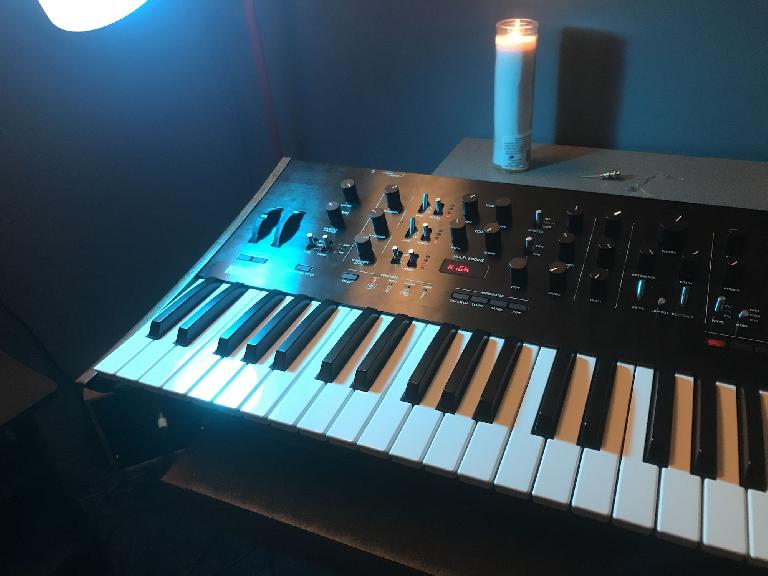 When you couple all of that raw oscillator power with a two-pole low pass filter, a modulation effect (phaser, ensemble, chorus, flanger) and a Delay/Reverb effect, all accessible from the main UI, you quickly discover how big and epic the Prologue can be and really is. Having one of the broadest frequency ranges in any synth I have ever seen, the Prologue 16 finally allows you to play giant, fluffy, stacked chords, unabashed. The 16 voice polyphony is no joke.

As an added bonus for the 16 voice buyers, Korg even threw in a new effects device known as a L.F. (Low Frequency) Compressor. Yeah, while the Prologue is capable of big, fluffy pads it’s also one of the best synths I’ve ever worked with for Sub basses, Kick Basses and huge plucks. The L.F. Compressor takes this rare gift for bass up several notches, once enabled. Subs shake the wall, kick basses cut through with ease and the low end becomes a sledge hammer. Fans of trap, hip-hop, trance, house and jungle will lose it when they hear what comes out of the Prologue without the L.F. Comp. But producers who have the ability to spend a little extra money will walk away with a tool that will shake any set of speakers. Trust me, you want the L.F. Compressor.

With 500 patches uploaded into the internal memory, trust me, you’re going to be spending some time going through many beautiful sounds that cover all the bases. Thankfully it’s not like jogging through vintage Korgs, where you’re at the mercy of the scroll wheel. It’s like the new Korgs, offering many ways to categorize and sort through what’s in there. For example: pressing the 2nd button over to the left a couple of times within the Edit section lets you search by Type (Bass, Pad, Arp, etc). The Pads are unbelievable, the leads are unbelievable, the arps are unbelievable. As I mentioned earlier, the basses really stand out which I do attribute to the L.F. Compressor. Even without it, there’s still a lot of power. I would say that where a patch on any synth is meant to serve as a starting point for new patches, the Prologue epitomizes this. With most every parameter available from the main face of the synth, as it should be, you find yourself modifying every patch that you skim past. Your modifications make major, major changes.

This is all made much more pleasurable with the actual keyboard on the Prologue. A beautiful, sensitive set of marked ‘Made In Japan’ keys that make my fingers itch to play it. Especially when it comes to laying down big, fat chords.

Arps, Ports, and Such…

The Prologue (both versions) sports a cool arpeggiator that, on its own, may not be the most mind blowing of arpeggiators. But when you consider that the Prologue 8 and 16 both have 1/8” Sync ports (In/Out) for Korg volcas, suddenly that arpeggiator and the Prologue become that much more attractive because it causes one to frame the Prologue keys as a centerpiece. 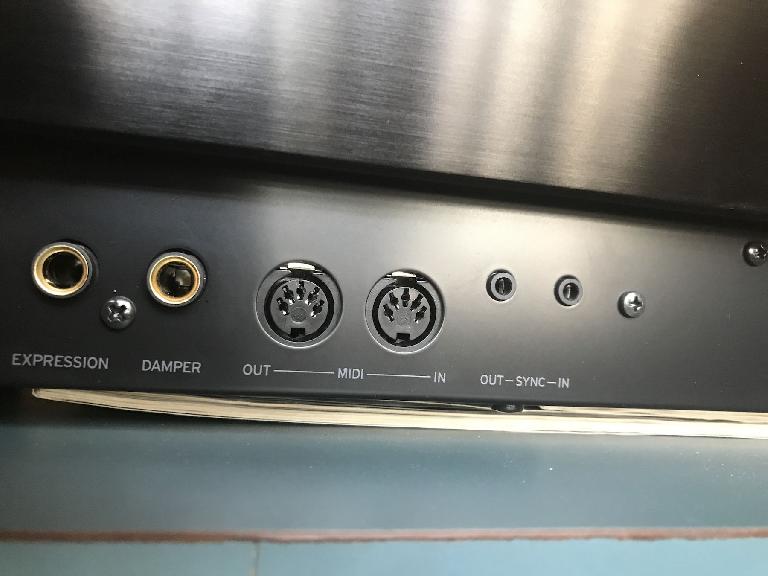 The Prologue is an astounding synth that has a distinct personality in the sound, regardless of the patch you are on, that is as charming as it is enticing. This is definitely a piece that is going to go down with many little gold awards all over it, as it can be both hard and beautiful all at once. It’s built like a tank, with wood panels on the side that constantly remind you you are playing a work of art. Sure, it’s a tool. But it’s a gorgeous tool and one that you’ll want to use, any chance you get. I can’t keep my hands off of it.

Pros: A beautiful, charming, oscilloscope mounted, power synth that merges analog and digital oscillators beautifully, in a package that is as timeless as it is gorgeous.

Cons: Wouldn’t mind a little more programmability from the arpeggiator.