Roland's TR-909 redefined what was possible for producers and made an impact on electronic music that can still be felt today. Suddi Raval reflects on its rich history.

Imagine being responsible for not just one, but two of the most important musical instruments ever created? There are few people who can claim to have had a greater impact on electronic music than Tadao Kikumoto. He is the designer of both the TB-303 and the TR-909. As with most ground breaking innovations, he wasn’t alone in creating the 909. Makoto Muroi, the chief engineer of Roland’s electronic drum and percussion division has credited the design of the analogue circuitry and the PCM (pulse code modulation) to Mr. Ou and the software to Mr. Hoshai.

It was the first drum machine to adopt the newly developed MIDI (the standard electronic instruments use to communicate with one another). Back in 1983, it cost £1000 in the UK ($1195 in the US or 189,000 Yen in Japan) which was hardly small change. It wasn’t a huge commercial success at the time of release for Roland but they continued production of the machine for 2 years claiming its demise was due to the Linn LM-1. Ikutaro Kakehashi, Roland founder said “digital had a better sound quality and everybody liked to have all digital. Roger Linn developed his drum machine which generated all of its sounds digitally. At the time everybody wanted digital so that’s why we couldn’t continue to manufacture the TR-909”. Despite its commercial failing the impact it had upon House, Techno and Acid was unparalleled. Many claim none of the aforementioned genres could have existed without the 909.

It was capable of storing 96 patterns and 8 songs within its memory banks and a variety of drum sounds that were not just ground breaking at the time of release but still stand the test of time today. The kick on the machine alone is the stuff of legend. It pounds any nightclub sound system with such ferocity that it literally shakes your entire body with every hit. The snare is both loved and hated by people in the synth community. It doesn’t even attempt to sound like a real acoustic drum. Instead, Roland opted for a unique analogue-synthesis generated splat, which was tuneable to provide a variety of tones, all of which punched like hell but never quite sounded like a real snare helping give the 909 its unique characteristic. 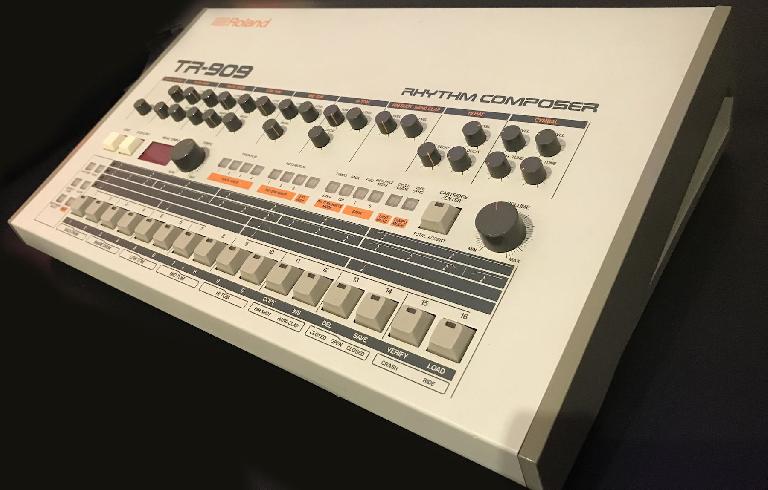 The hi-hats were some of the few things that were actually samples as was the crash. Roland claimed they couldn’t quite achieve the same impact with analogue synthesis so opted for the newer digital sample technology. Many felt Roland didn’t want to be left out of the digital revolution that many rivals had begun to get involved with. You’d think the rimshot wouldn’t be anything of any great interest but in the great tradition of Roland creating something better and more imaginative than it should be, the rimshot on the 909 has contributed to many legendary House and Techno tracks.

A stand-out and a truly incredible use of the rimshot is a track called “Well (Franklie) My Son” by Robin Wants Revenge. At the Hacienda night club, its off-kilter syncopated rhythms almost threw dancers off balance such was the power of its bizarre rimshot placements. The sound of the clap on the 909 was also a bold move by Roland. Once again, it sounded nothing like real hand-claps. Whenever it was heard, it cut through the song it is used on with such dominance it’s impossible to ignore. Much more than just a percussion hit, it has been the lead on many Techno records and continues to play a huge part in dance music today. Listen to any of Plastikman's seminal albums for good examples of its effect. Interestingly due to the fact that the clap and snare are produced by the same sound source, when the two are played together they produce a curious phasing effect if played simultaneously.

The 909’s found itself in rhythm sections way beyond dance music. Many of the world biggest pop artists and producers such as Madonna with Vogue and Pete Waterman chose to adopt the machine for a clubbier pop sound. Another artist/producer who helped place the 909 into pop charts internationally is Bjork. She used the machine to great effect, creating an almost military-like rhythm on her song Hunter. 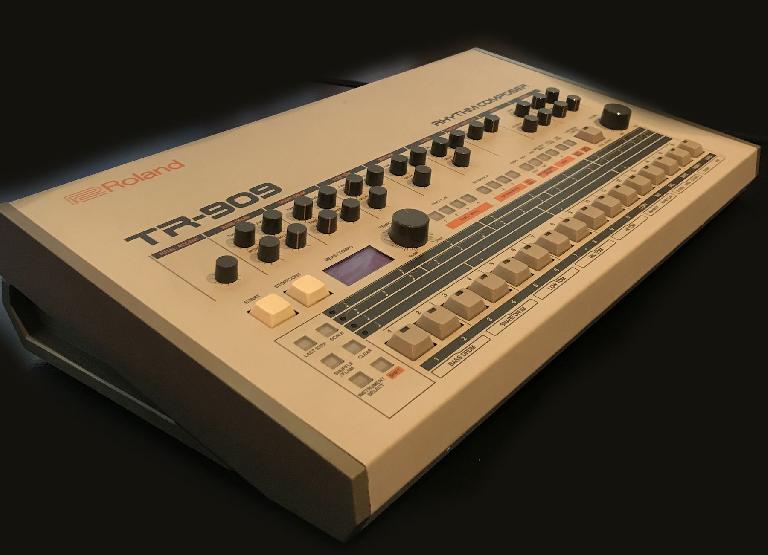 There are countless producers who claim to have an affinity with the drum machine. It is often affectionately talked about more like a pet or a person than a machine such is the connection it has with its users. Some of the greatest names in dance music have become possessed by its unique sounds.

An online video of Jeff Mills playing the 909 caused quite stir. It is just Mills in a blank white room and the 909 producing some of the most incredible rhythms imaginable.

I remember thinking it was one of the best live electronic performances I’d ever seen and it was just one man and one drum machine. The video has become the stuff of legend now, he plays it so well, like a virtuoso of a drum machine. When Jeff Mills was performing live at the Barbican in London in 2017 I felt lucky to have bagged myself a pair of tickets and the night was even more incredible that I could have imagined. He has a connection with the drum machine few people can compete with.

Derrick May who has been responsible for some of the most innovative uses of the TR-909 famously acquired his drum machine from House music Godfather, Frankie Knuckles.

The machine become so synonymous with Techno, Mark Archer of Altern-8 and Nexus 21 said “it was a machine I became personally obsessed with.” He went on to ask “If you weren’t using a 909, were you even making Techno?”

Although the original machines fetch in excess of £2,000 today, Roland produced a budget digital recreation in 2017 called the TR-09 which can be found at most music instrument retailers today .

Whilst the flood of sample CDs, imitations and clones on the market will never replace the real thing, it may be the closest many of us get to an original 909 with its second hand value increasing year by year.

Suddi Raval has been working in the music industry for over 30 years, with his roots in the legendary Hacienda nightclub, having co-wrote and produced one of the most iconic tracks in the clubâ€™s history, Hardcore Uproar. His band Together are the only act to have ever performed live at the infamous Blackburn Acid House parties. He wa... Read More