Language
Combining 8 acclaimed Unison preamps and onboard DSP for plug-ins, we tested the new Universal Audio Apollo 8p. Matt Vanacoro finds out if it can be a worthy addition to your studio.

The Apollo from Universal Audio has transformed from a groundbreaking audio interface into a series of interfaces that can be cascaded together to give you all the I/O and DSP you could ever need in a studio. The Apollo 8p is UA’s latest addition to the line, and it packs some serious options for getting audio in and out of your computer.

If you’re unfamiliar with the Apollo concept, here’s how it works in a nutshell. You get a top-notch audio interface with an easy-to-use console interface that runs on your computer. Aside from being a pretty terrific way of getting your audio in and out of your computer, the Apollo also contains a UAD-2 DSP processing engine. This engine will host a variety of plugins and allow you to offload the burden of running them from your computer to the Apollo. With the Apollo system, you never have to worry about how hard you’re pushing your computer by adding plugins—they’re hosted on the Apollo itself.

It doesn’t end there, though! You can record with the plugins enabled on the various channels of your virtual mixer. Got a favorite vocal setup of preamp, EQ, compressor, and reverb? You can put those plugins on the input channel of your Apollo and record with them enabled, thus leaving plenty of room for other plugins later on. It’s a refined system and works incredibly well. 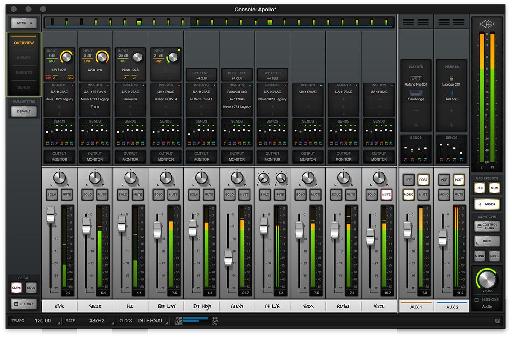 You can even utilize this system for undetectable latency when running plugins in a live situation. Numerous tour companies are now including the Apollo in their live sound rack and offering a ton of studio-quality effects to artists that simply weren’t economically possible before. It’s now not only easy, but convenient and cost-effective to give a touring artist the same dynamic and FX channel that they utilized in a studio to create their recording! The best part is that you have the option of utilizing the effects to the front of house but making a live recording completely clean.

How does the 8p stack up to the other members of the Apollo family? Well, the biggest and most obvious way is with the 8 Unison preamps on the back! Universal Audio premiered the Unison technology after the release of the first Apollo. In a nutshell, Unison allows you to emulate vintage mic preamp circuitry with the UAD-2 DSP core and the physical inputs of your Apollo. When modeling an API channel strip, for example, the impedance and gain-stage circuit behaviors of the API. The dynamic ‘sweet spots’ of the original preamp are all preserved, and even the front panel controls will respond like the original hardware!

I’ll be completely honest, I have been an absolute fan of the Unison technology since day 1. All UA has done so far is continue to develop it and add features to it. You can now model classic guitar pedals and get the same impedance matching/gain-stage emulation that you do with the preamps. I love it on the 4 preamps in my Apollo 8, and to think that you can now get 8 of these all on a single interface makes me extremely jealous of anybody who is currently in the market for a new audio interface!

If you are lucky enough to already own an Apollo interface, one of the coolest things about adding a second one is the ability to link the interfaces together before it hits the operating system. In other words, UA has created its own ‘aggregate device’ system of sorts that handles all the heavy lifting for you. You don’t have to worry about clock sync or any of your devices drifting. Console 2.0’s driver takes care of all of it for you.

Possibly my favorite feature of this is the ability to show/hide inputs and rearrange where they appear in both the driver and in your DAW. I have several Apollo interfaces, and quite a lot of things plugged into them. I don’t, however, necessarily need to see all of those things every day. In fact, on most days I just need my super mega awesome vocal channel visible, a guitar input live and ready to go, and a stereo mic setup to capture my acoustic guitar. If that’s what I’m using 75% of the time, I can set up the Apollo systems to only let me see those inputs, and in every DAW or audio program I utilize, those are the only inputs that show up. Then, when a band comes in to track, with the click of a mouse button all of my inputs are back. I’ve got a completely mic’d up drum set, guitar DIs, mic’d guitar amps… the whole 9 yards.

The organizational freak in me also likes that I can rearrange the appearance of the inputs. I have my kick/snare plugged into inputs 1 and 2, but the drum overheads are on my 2nd Apollo plugged into inputs 7 and 8. With the Apollo’s flexible driver system, I can actually have those inputs appear next to each other in my operating system.

Cons: The 2 front Hi-Z instrument inputs take over Analog 1 and 2 when you use them. I would love it if these 2 inputs could be discrete and not affect the 8 rear analog inputs.