Language
We've been told, "it's all about the bass"... and Sam Spacey's Epica Bass puts a vintage, analog slant on this thought by capturing some authentic legendary bass instruments for Kontakt users.

Sam Spacey is the producer behind the epic, er, Epica virtual instrument, and his latest creation is Epica Bass. No less epic, but this time a premium collection of analog bass synth instruments composed entirely of samples of real vintage hardware. Since this gear is hard to come by and frankly takes up acres of space, could this be the perfect way to get the sound of these analogue monsters but without all the hassle?

Epica Bass is attractively priced at just £89/around $132 which is not much more than you’d pay to have a real analogue bass synth delivered, if you could even find one on eBay. The point here, of course, is that all the hard work has been done for you. It’s made up of 430 instruments and 26,657 samples but only takes up around 5 GB of disk space. This is primarily because the samples, just like the instruments they are taken from, are mono. Bass is one of those sounds that just doesn’t work in stereo because it needs to sit at the center of the stereo field and provide the power and weight in a track.

It runs in Kontakt or Kontakt Player and the installation process is painless. Once up and running, you get five separate categories of bass instrument covering a range of types: monophonic, arpeggiated, multis, polyphonic and raw waves. Whichever patch you load is presented in a clean and uncluttered multi-page interface in Kontakt. The Main page contains many of the controls and has four sub-pages, easily accessed from along the top. First up is the Amp section where you can dial in changes to the amplitude envelope and also alter the way that velocity is sent to the sample start point, filter and amp sections. 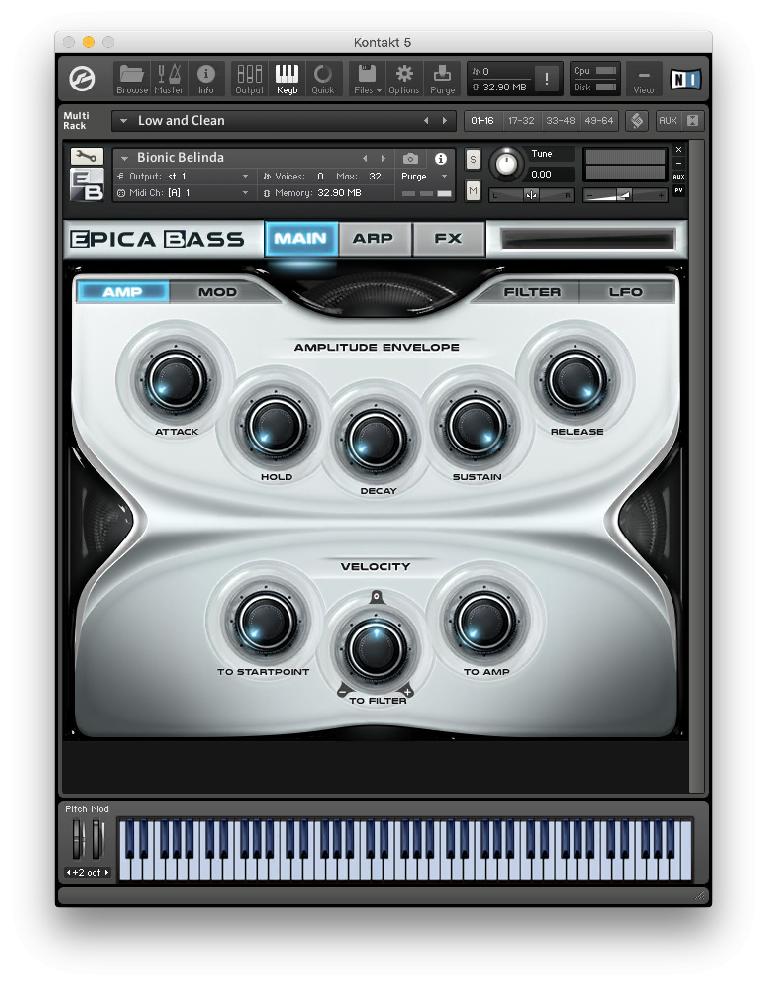 The Mod section is next and here you’ll find a pitch envelope section and pitch modulation with randomizer, drift and portamento to make things more interesting. A clever Startpoint Mod section lets you mess with the start point of a sound’s sample and also dial in some randomization. By playing with these controls, you can make a sound start at a slightly different point in the sample every time you hit a note which is a good way of adding interest to monophonic bass sounds.

The Filter tab is next and as well as multiple filter types there are controls for key tracking and envelope amount, as well as a filter envelope section below. Filtering analogue basses is one of the most effective ways of quickly changing their character, and it’s easy to achieve here. Finally, in this section is an LFO tab where LFO can be sent with variable wave shapes to pitch, filter and amp sections with variable frequency and fade dials plus a mod wheel assign control. Send some LFO to the mod wheel and you can easily turn a regular bass into a full-on dubstep wobble. 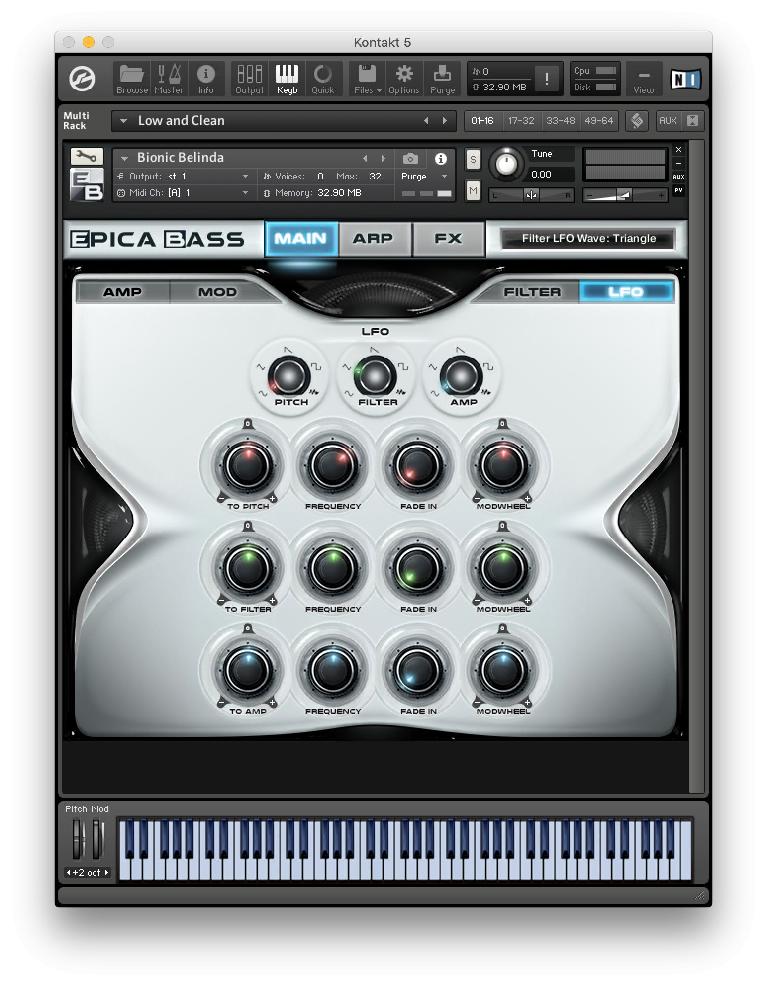 Start up a Sequence

The next major section is the arpeggiator and this is great for livening up electronic bass parts. Switch it on and choose a mode: normal, latch or dynamic, and a number of steps and a range for repeating notes. You can turn steps on or off and set rate, duration and amount of swing as well as which note order or direction the sequence will play in. If you hold multiple notes you can make this do some pretty interesting stuff though even with single notes it’s still very capable. The Auto Scale tool, when enabled, means that if you set a key then any key you hit will conform to that scale even if you press a “wrong” key. I couldn’t swear that this is based on NI’s Scale technology from Komplete Kontrol but it seems likely since Kontakt is an NI product and the developer says that he included this feature specifically. 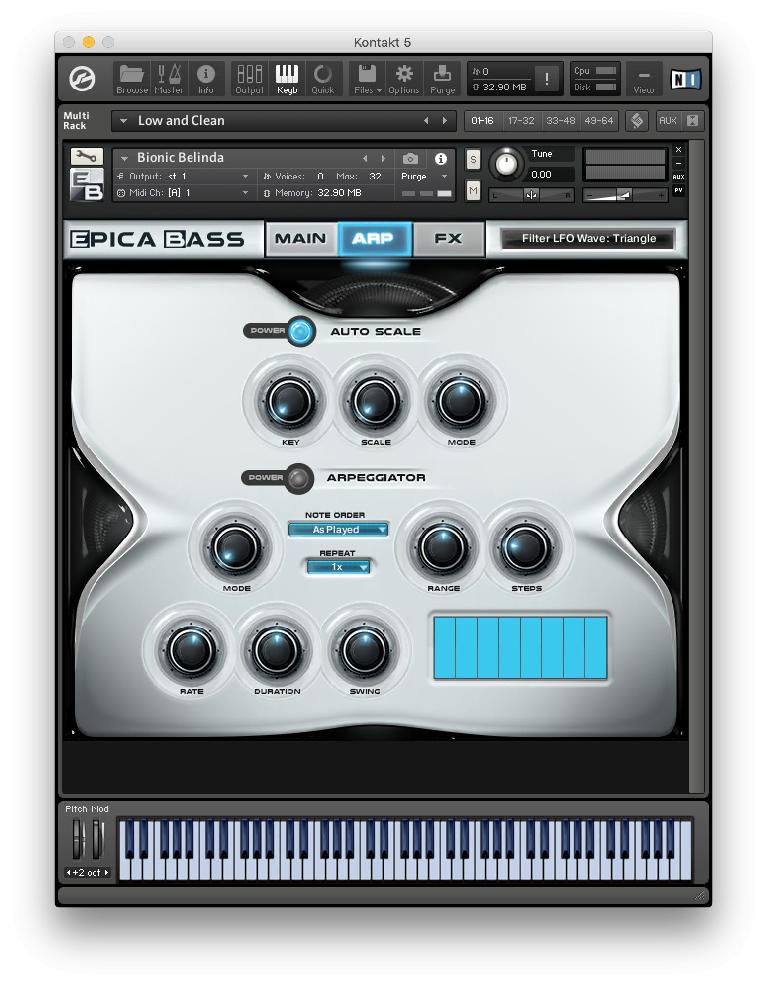 The arpeggiator has an Auto Scale mode to eliminate wrong notes

As if all that wasn’t enough, there’s an extensive effect section available for processing your sounds and it takes the form of a rack of modules which is nice and friendly to work with. There are seven effects, of which five run in series and the delay and reverb which work on aux sends. These are always present—there’s no loading—but they can be switched on or off and obviously have their own sets of controls. Interestingly, you get a re-badged version of NI’s Solid G-EQ and Feedback Compressor as well as a lo-fi module, flanger and chorus and the standard Kontakt reverb and delay units. It’s a suitable selection for bass and is used on many of the presets to jazz things up a bit. 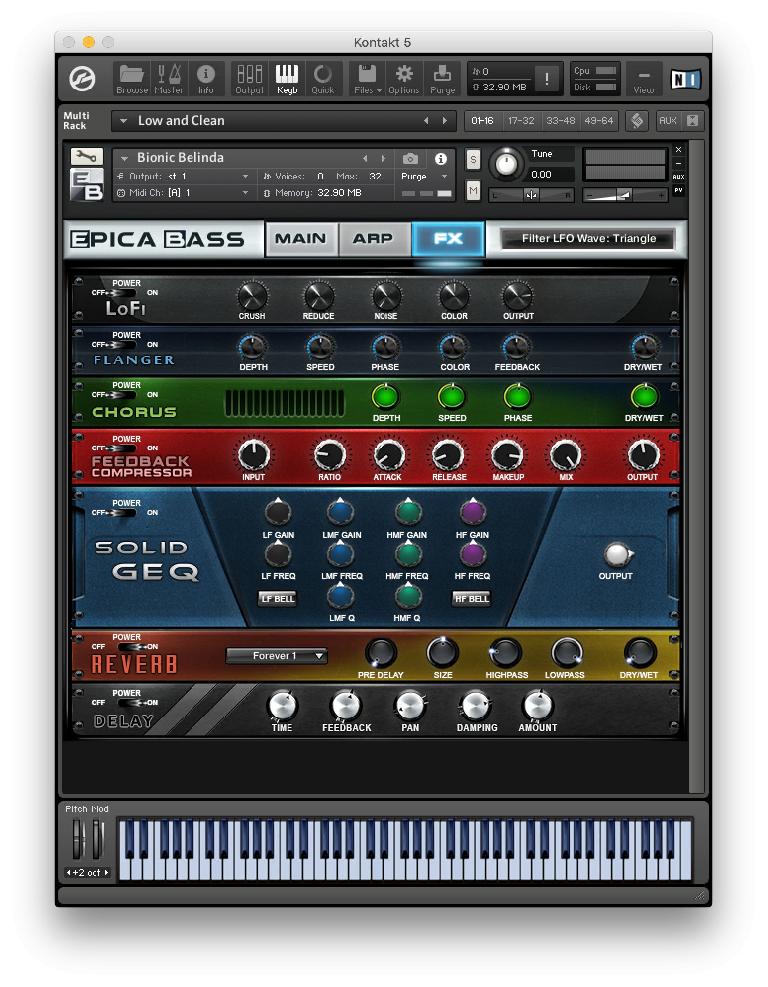 Speaking of the presets, they’re excellent. The selection of hardware that’s been sampled to make up the library is impressive, including ARP Odyssey, Pro 1, SEM, Oakley Modular, SH-1000 and Future Retro models amongst others. The recording chain was carefully thought out and involved hardware including UBK Fatso, Kush Elektra, Eventide H8000, DBX160XT, Neve Pre amp and several rare guitar pedals to accurately but sympathetically capture the sound and character of the original hardware. Multiple round robins and hand-configured loop points have been used to avoid artefacts when samples are looped, and it’s worked really well.

Bass in your Face?

The monophonic patches are huge and monolithic, the polyphonic ones work better where a sound is more percussive, since bass chords are something of an acquired taste, although for higher-pitched sounds this is fine. Arpeggiation really brings things to life as does the use of delay and bitcrushing on some of the presets. Multis layer up more than one patch to make even bigger sounds, typically mixing quite different types of sound to do their magic. Finally, the raw waves are also available for anyone who wants to get into the meat of designing their own patches from scratch.

Epica Bass is a fantastic-sounding bass instrument that faithfully captures the power and feel of some legendary hardware units. Suitable for everything from EDM to krautrock and more experimental stuff, it’s approachable and easy to work with, and offers plenty of customization options. Best of all, it’s very reasonably priced so it’s not likely to break the bank.