Language
Akai Professional's MPC Touch looks to combine the best of tactile controls and touch-screen worlds in one music making machine. Hollin Jones finds out whether this MPC has the golden touch.

It has felt for a while as though the worlds of controller hardware and touch interfaces needed to come together in a way that felt properly thought out rather than kind of awkwardly combined. There are plenty of hardware controllers that don’t yet implement touch screens, like Maschine, and plenty of iPad apps that are fairly self-contained. There are also products that use touch but manage to make it hard work. AKAI’s MPC Touch aims to be a different kind of product: a way to bring together the kinds of touch we’re used to on our phones and tablets with the company’s well-known MPC look and feel, plus the power of your computer. Like some other controllers, it’s designed to give you near-complete control without having to keep turning to the computer. Unlike most, it goes really quite a long way towards implementing touch in a way that feels natural. 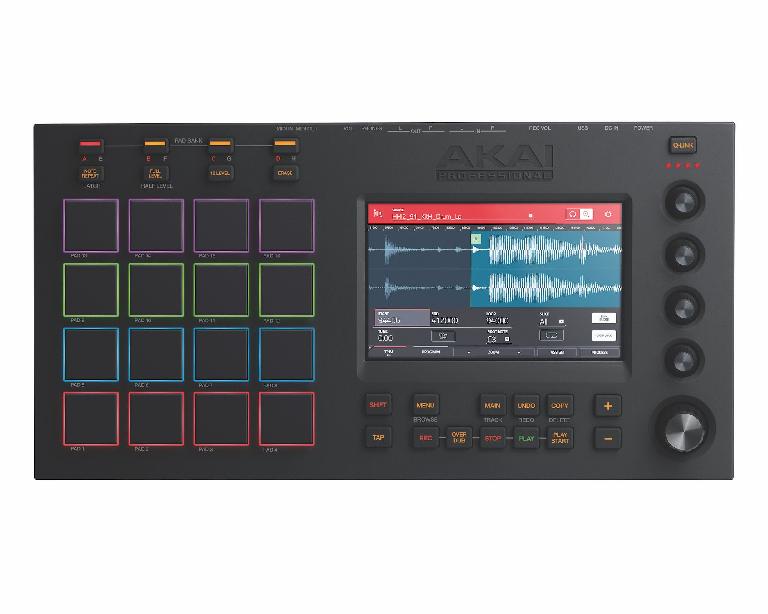 The hardware unit feels very well built and is solid but portable, finished in rubberized black plastic and with a red metal base. It needs to be PSU-powered (that screen requires more than bus power can provide) but that’s not a surprise in a serious device. It actually contains a two-channel audio interface as well, for sampling in and playing sound out, though it’s locked to 44.1 kHz, at least unless this changes in an update. The software can run at up to 96 kHz and you can, of course, use a third-party interface too, if you have a higher quality one already. Just connect to your Mac or PC over USB (which you’ll need to do anyway) and route audio from there, either via the standalone MPC software app or running it as a plug-in inside your DAW.

The rear of the unit contains audio in and out as mentioned, as well as USB which will send audio and MIDI to and from the computer. There’s a record volume control on the hardware for sampling, a master volume out control, headphone port and MIDI in and out 1/8 inch jacks. These smaller jacks are used to save space on the hardware, but adaptors are supplied so you can hook up external MIDI gear to the Touch as well. 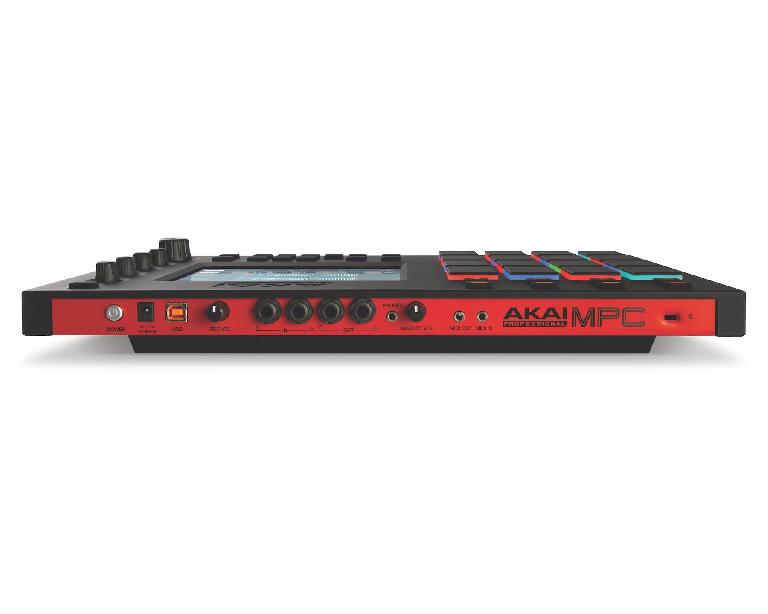 You’ll need to register your hardware online to get the MPC software and content downloads and while this isn’t unusual, the process feels a little long-winded as it currently exists. On the Mac, installing the software required three separate restarts of the computer. It installed some display drivers that initially started mirroring my desktop to the touchscreen, though this can be switched off so that the touch and computer screens behave independently. Once you’ve made it through the setup process, you can do almost everything in the MPC software from the Touch hardware. Hardware that allows this kind of thing does exist, but it’s rarely this naturalistic to use. The touch screen is really nice and very responsive to input. We’re mostly so used to phones and tablets now that this way of working just makes sense. 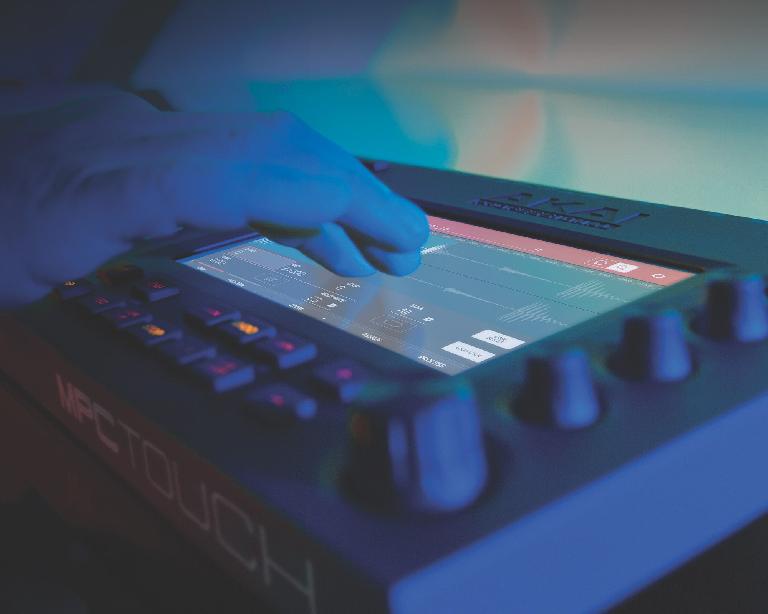 In terms of the other controls, the 16 pads work over 8 banks for a total of 128 and they have a great feel. There’s multicolored backlighting that can be customized so you can quickly recognize grouped sounds and the four Q-Link knobs on the right are capacitive, meaning you can touch them to activate them, you don’t have to change a value first. They are spread over four banks for a total of 16, and there’s a large data wheel for data input as well as a multi-functional set of controls. Transport controls live inside the touchscreen, as do many others now and while this may not please MPC purists, this is designed to be a different kind of product. While longtime users may take time to readjust, for new or more adaptable users, the touch interface works really well from the get-go.

You can touch this

There’s a lot of stuff inside the touch interface and the best way to see all of it is to watch the videos on AKAI’s site: we don’t have time to detail it all here. But there are some definite highlights. The step sequencer is fully integrated with the touchscreen and allows full control over velocity, quantizing, nudging and pad assignment. The Sample Editor lets you work with your samples, chopping and processing them, setting slice points with your finger, pinching to zoom and so on. It’s much more natural to do than using knobs to achieve the same thing. 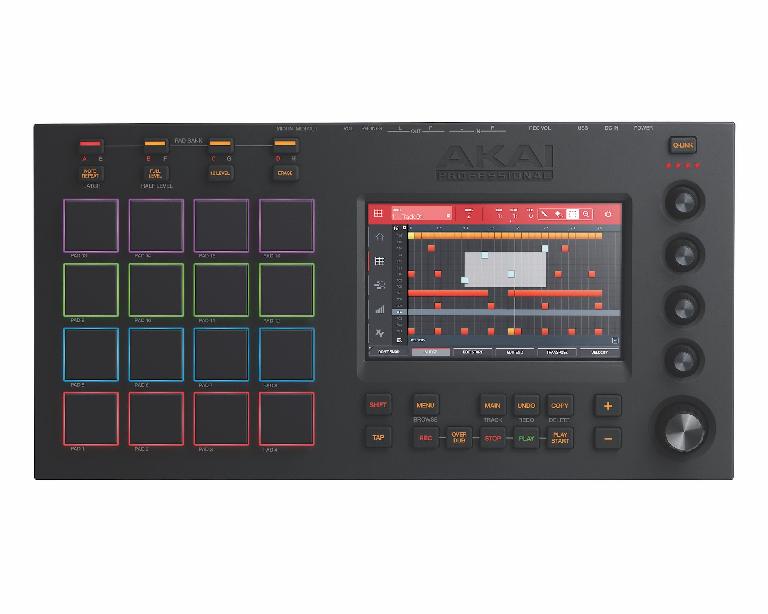 The screen can be turned into an X/Y pad for manipulating effect parameters and sound dynamics, with value and parameter displays on the screen. A Pad Mixer section lets you set the levels and pan of any pad and it’s also possible to quickly layer up multiple samples onto pads and set their levels individually. VST effects can be added to pads and you can easily bounce down and resample layered or effected sounds to new pads. A Phrase Looper helps to create loops easily and there are over 20,000 sounds bundled from some top notch sample companies. 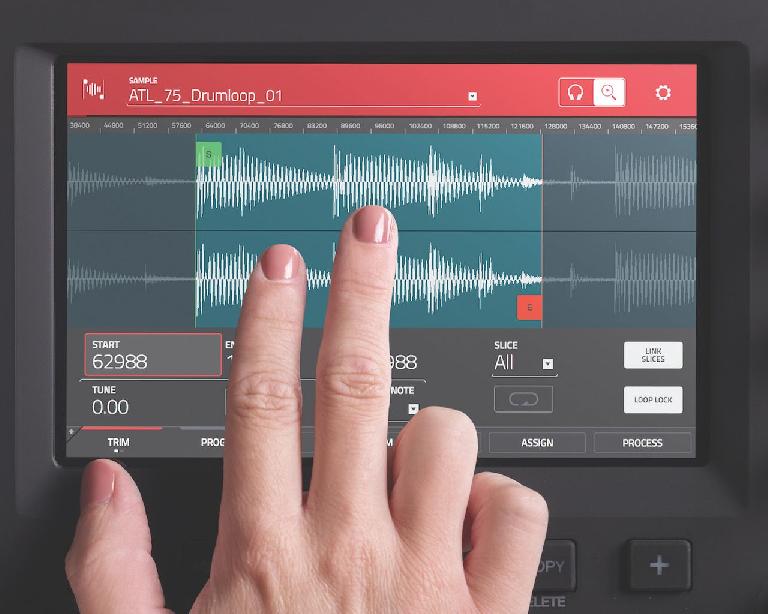 Although the touch screen works really well and definitely speeds up workflow, there’s still plenty of emphasis on the pads and programming beats just like you always used to. Physical pads will always have a tactile element that touchscreen pads can’t match—even though using a touchscreen here does let you edit and program notes and patterns too. The MPC Touch is a serious tool and newcomers will want to invest a little time in figuring out the workflow but once you do, it’s really slick and arguably the best use of touchscreen tech in a hardware music device that I’ve seen to date.

Con: Setup could be smoother. Audio interface limited to 44.1kHz.