Language
Isotonik Studios and Ned Rush are well known for their Max for Live visual performance tools. So how does the new World Max for Live device stack up? Joshua Casper finds out.

This is exactly what I have been waiting for from Max for Live.

Since Max became integrating with Ableton Live I have been patiently waiting for visual tools like World. There have been quite a few devices geared toward graphics out for a while now, including many from Ned Rush and Isotonik Studios, but they have all had their flaws in one way or another. Maybe not so much flaws, but let’s say, “limitations”. World, however, is the beginning of what looks to be a universe of incredible visual performance assets all right inside Live.

The main feature that makes my eyes light up is that you can have multiple visual generators on multiple channels that all render in one place—the World Viewer. That means I can have one geometric shape being created by and syncing to the kick drum while another dances to the bass line… and then yet another for some vocals.

The starter pack comes with a number of great modules that got me up and running a great visual show quickly. Some things took a little bit of toying and experimenting with to get the exact results I wanted, but that was to be expected with such an in-depth set of devices.

This is where all the visual generator modules render their final output. It is what you would put onto the big screen at your show. Though each of the generator modules have their own set of controls, this module also has a lot of final control of the graphics as well.

Most of the parameters on each of the generator modules can be routed to the World Viewer’s controls so that they can be controlled there—look at it like a global control. Not only that, but multiple devices can have their parameters mapped to the one control on the World Viewer. This is great if you want to change the same parameter on multiple modules, but don’t want to have to bounce to each container channel. Things like color, shape, size, draw mode and pretty much anything else can be routed/mapped to the World Viewer.

Which parameters to route to the global controller might take some time to get used to, however, that is the way it is with any new device!

This module takes incoming audio signals and turns them into geometric shapes which then get morphed in conjunction with the velocity of the source audio signal. You can change things like shape, size, colors, draw modes, rotation and more. 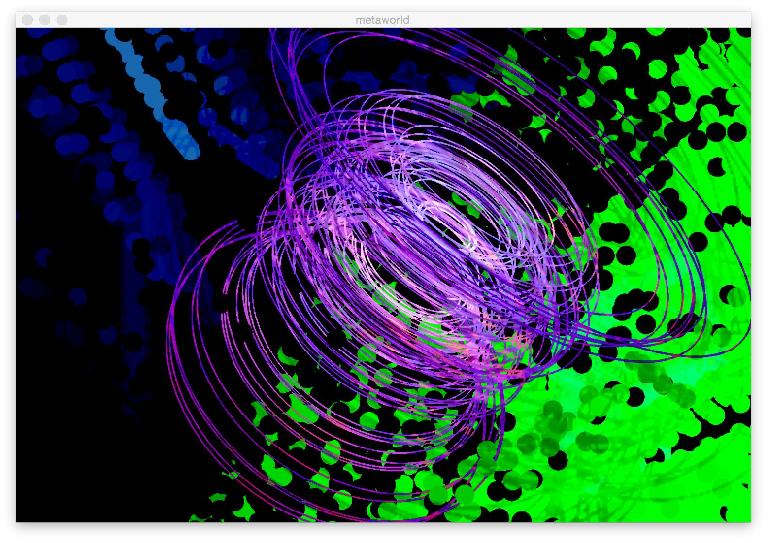 This module takes incoming audio signals and creates 3d waveform patterns. Once you start getting in and really tweaking the parameters things can get quite funky and unique rather quickly. Again this is all synced to the audio of the channel where the device is located.

This module might be considered the “background” generator.  You can get quick splashes of flickering lights or send the viewers into a warm hole! 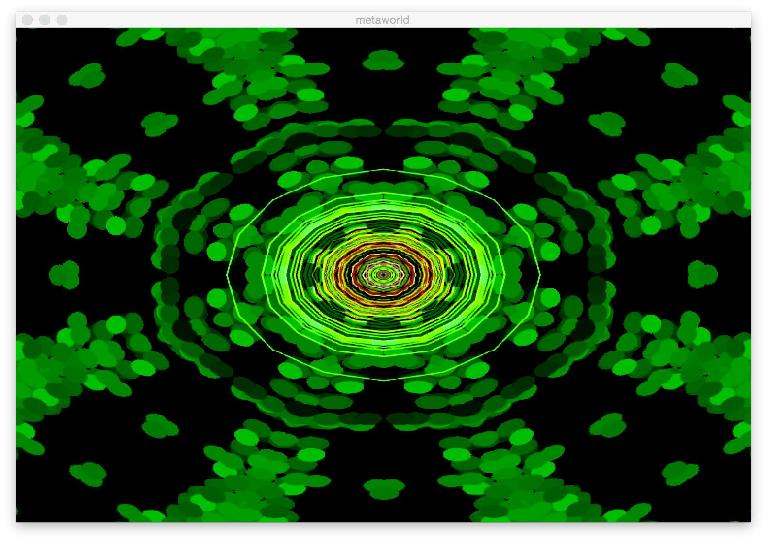 This module generates text which you have quite a bit of control over. It also renders in 3D!! You can choose the font, size, letter spacing, 3D depth, location, rotation and a few others. This is a great place to put in your name or website. I am told that a .png module is coming in the next update so you can overlay your logo if you wanted to go that route instead.

I highly suggest you check out Ned’s walk-though/tutorial video to watch World in all its glory and to hear form the creator himself about the many possibilities!!

Beyond the set of great modules that are already included in the pack the next thing that makes my imagination fly is where this concept can go from here. I spoke with both Ned Rush and Darren Cowley about their plans for expansion and what they had to say will make you just as excited as I am.

“Well, I personally am already working on new modules for it, and I'm excited that other artists we've approached with the idea are keen to get involved to contribute stuff, so it could go completely nuts. I hope so. There are people out there who are much better at max than me and I want to play around with their stuff. Really I'd like it to be a huge multimedia mash space. Ableton for decades now has been the best out of the box software performance tool, it's just a shame that they never jumped on the visual bandwagon, cause moving images now is so much a part of an electronic performance as much as the music, their workflow would lend itself so well to video loops or audio reactive geometry.” – Ned Rush

A couple of the “other artists” mentioned are seasoned Max programmers like Utami and Chris Vik who will be integrating some of their already existing devices and possibly making some new ones. This is all very good news!!

Cons: Nothing comes to mind; though maybe older graphics cards might be finicky.