Language
Mellotoon is the latest release in Toontrack's EZKeys range and brings you the sound of the original 1963 Mellotron in software format. Toby Pitman checks it out.

The Mellotron is one of those instruments that is just impossible not to like. With one of the most distinctive sounds around, it's an instrument that has woven itself into the fabric of contemporary pop and rock. Developed in 1963, the Mellotron was the first instrument to used '˜sampled' sounds that could be played back from a piano keyboard opening up a new world of possibilities for studio and touring musicians. 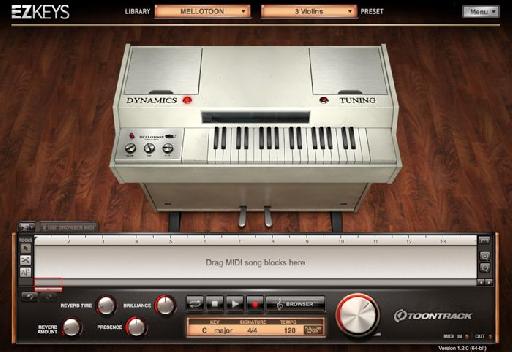 Mellotoon is the latest release in Toontrack EZkeys range and brings you the sound of the original Mellotron in software format. Let's check it out.

The Mellotoon interface is a pretty simple affair like most of the EZ range. There's controls for Velocity dynamics and tuning options (although luckily it's a lot more stable in this department than the original!).

At the bottom you'll find the song builder (which is covered in the original EZKeys review) and transport. I have to say this is still a really cool feature of this range and really quick to use. You won't find any dedicated MIDI library with Mellotoon as it doesn't really need one.

There are also controls for the effects section too. You'll find each sound has its own basic set of effects that differs slightly depending on the sound.

Mellotoon ships with 13 sounds from the original Mellotron tape libraries plus two low speed variations of Strings and Brass. There's a good variety and all the really classic Mellotron sounds are represented. I'd say Toontrack have geared the choice of sounds firmly in the direction of the classic Rock/Prog era of the instrument. Examples being the classic '˜3 Violins' from King Crimson's 'Court Of The Crimson King' to the Ubiquitous '˜Solo Flute'  from '˜Strawberry Fields'. 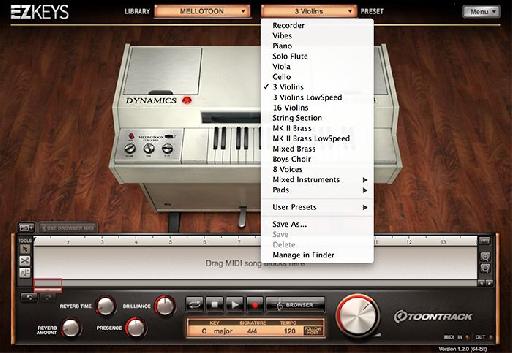 Though the supplied library contains probably the most '˜useful'  sounds from the Mellotron for contemporary styles, I think Toontrack missed a trick by omitting some of the more quirky sounds like guitars, mandolin, harpsicord and accordion which can really work well in pop productions for that king of retro sampled sound. The original Rhythm accompaniment tapes are also a wealth of retro sample fodder but sadly omitted here.

Unlike the original, all the sounds are looped where on the original you had about 8 seconds of '˜tape time' per note. Not that this is a bad thing as the samples themselves are really nicely recorded.

As with all the EZKeys range, there are of course a selection of rather nice sound design patches built from the core sound banks. Each one comes with its own unique effects chain and the Mellotoon comes with a few really enjoyable presets. From the rather gothic '˜Beyond' to the lush pad sounds of '˜Flow Motion' there's some cool stuff here.

The only shame is you can't make your own combinations which would be nice. You can however use multiple instances and external effects for this kind of thing.

This is by no means a definitive collection of Mellotron sounds but all the useful core Mellotron basics are here. Price-wise, it stacks up around the same as other emulations out there and does a great job with a no-hassles approach. Ideal for retro rock genres and beyond.