Language
We've heard it all before, right? Innovative synth... Truly unique... something different... but RayBlaster from Tone2 Audio Software looks set to actually live up to the marketing hype!!

If you're looking for a unique synthesis tool to add a new dimension to your sonic palette, Tone2's innovative RayBlaster might just do the trick. Using an unconventional psychoacoustic technique dubbed Impulse Modelling Synthesis (or IMS, for short) it uses “short bursts of energy” instead of a standard oscillating waveform to generate sound. According to their website, this novel technique results in a lower RMS but higher perceived output across all frequency bands, supposedly resulting in a richer sound across the spectrum—a bold claim. But does it hold up?

The core functionality of RayBlaster is delivered in the wave editing section. Here we can select from a wide range of included wave impulses–or load your own waveform; anything from drum loops to vocals.

Next, you can superimpose a second wave shape from a smaller selection of impulses which modifies the shape of the waveform with drastic results. Still within the first of our two oscillator-equivalent sound source areas, we can load a second user-defined or included waveform—and then adjust its harmonic content. We can now blend these two waveforms together, adjust the overall waveform start point, select from one of eight pulse-width modulation modes and three noise modes, and then finally adjust the PWM, noise, and High Boost amount. Without even mixing this with the second identical wave source area below, I was able to achieve wild timbres with little effort.

If you're used to a typical synthesis architecture, one of your first questions when dealing with RayBlaster will almost surely be: “Where's the filter section?”—but using IMS, the filtration is, supposedly, built into the waveform impulse itself. Instead, we'll use RayBlaster's unique Formant and Damping controls (Pic 1—right side) to adjust the timbre and tonality of our sound. A slight tweak of the Formant control results in extreme changes in frequency spectrum, but it's far more than a simple filter. If you want to remove high frequency content, increase the Damping amount, which actually adjusts the waveform itself; to remove low frequencies—which can get quite intense with this synth—adjust the included low cut control. The Tune dial adjusts the pitch in harmonized intervals or, with BPM engaged, synchronized tempo amounts—while enabling Sync results in a completely different character when sweeping the Formant. Envelope and Key amounts work much as expected, while the global Phase, Drift and Ring bring additional coloring to your sound design.

The two included envelopes and LFOs give added shape to RayBlaster's unique output, and can be assigned flexibly in the modulation Matrix area for dynamic control. The BPM-synced LFOs were particularly enjoyable in their smooth shift from one quantization setting to the next. 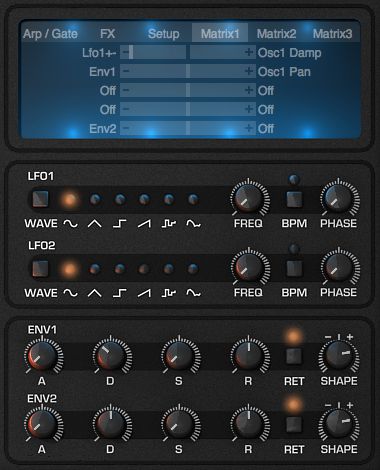 Without even venturing into RayBlaster's included Arpeggiator, the included Effects section adds another dimension entirely. With two effects banks that include a selection of reverb, delay, chorus, phaser, distortion, equalization and even vocoder effects, it's easy to add spatial and temporal dynamics to your already unique sounds.

Finally, we have the global section, where we can adjust the Drive and Glide amounts, add a particularly intense Unison/Spread, and adjust our global amplitude envelope and output volume. 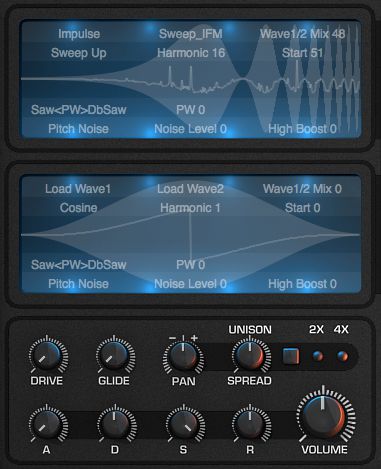 There's no doubt RayBlaster offers very unique synthesis options—but does it live up to Tone2's claims of psychoacoustic sonic satisfaction? I was only able to test it on a limited range of sound systems, but to my ears, it did indeed provide surprisingly rich low-end for a digital synth engine, along with detailed highs and a very present yet pliable mid-range. Combine these elements with user waveform input, powerful wave shaping, and high-quality built-in effects and RayBlaster is almost certainly worth a shot for those seeking a fresh tool in their virtual box.