Language
Sony have finally stepped up and introduced a completely new, native Mac OS X version of their popular audio editor, Sound Forge Pro. Sure, we hoped for it... but how does the Mac version measure up?
The Mac OS has always has its fair share of industry-leading DAWs and music applications. Many consider it the platform for us audio types. However, until recently, it was missing one of the most highly acclaimed audio editors: Sound Forge. In truth, when I was first given a tour of Sony's flagship audio editor back in the days of Windows XP, I was green with envy. As much as I enjoyed using Soundtrack Pro (now unavailable), and tinkering in BIAS Peak (also gone the way of the dodo), I recognized that Sony had created something special.
So, there was with much waving of arms and general cheering within the Mac community when Sony recently announced the arrival of Sound Forge Pro for Mac. I was initially tentative as many apps ported from Windows just don't behave in the same way as native Mac apps. Fortunately, Sony has created Sound Forge for Mac from scratch, and not only does this give it an integrated Mac OS X GUI, the speed and feel of the app makes it a pleasure to use.

A simple and fairly speedy download was pretty much all that was required. The complete app weighs in at under 200 MB, and once downloaded you're instructed to simply drop it into your Applications folder, and enter the serial number once you've launched it. All in all a painless process. 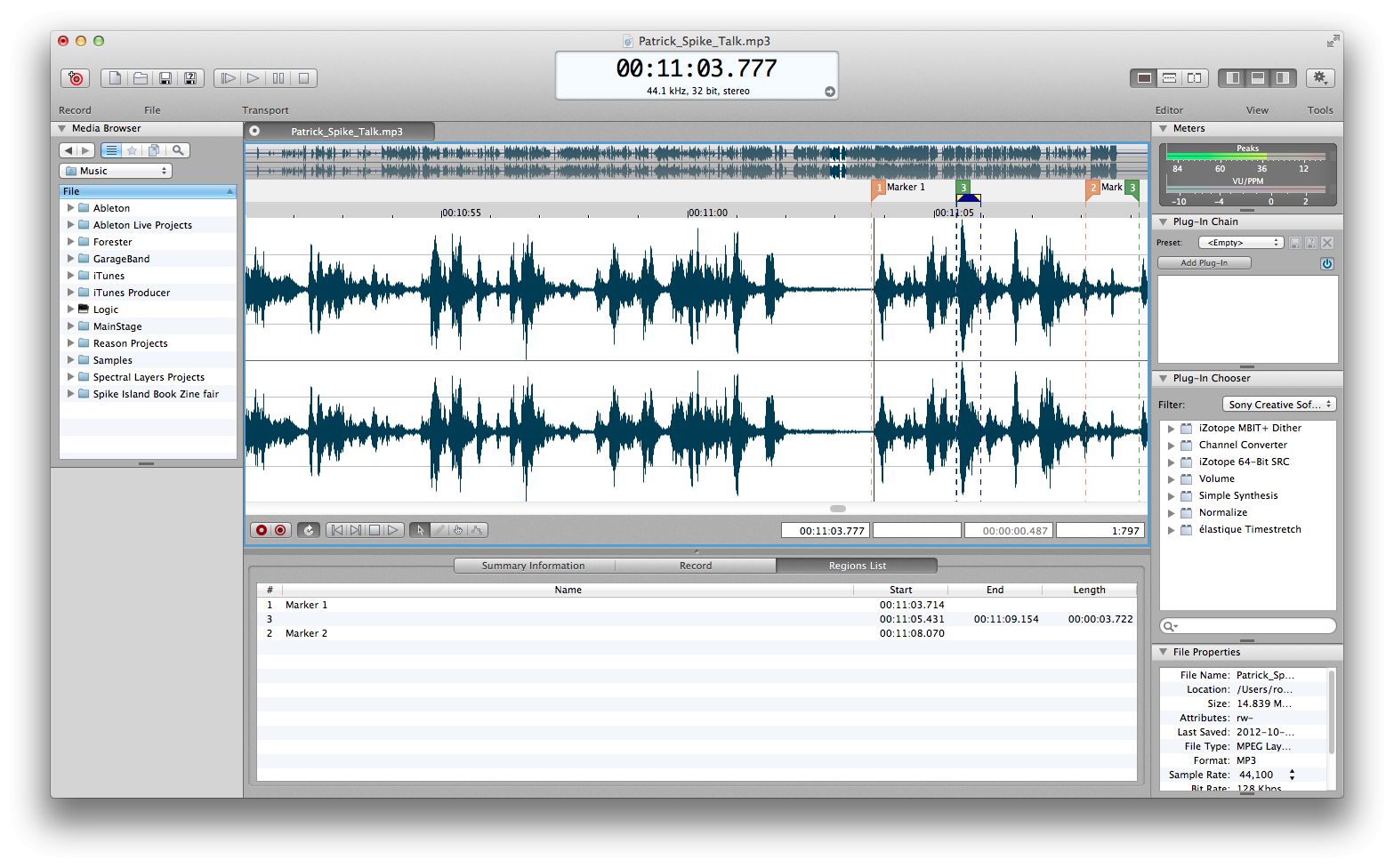 The interface is clean, uncluttered and split into re-sizable panes, perfect for editing audio without extra distractions, or bells and whistles (yes, I'm pointing an accusing finger at a number of DAWs). Over on the left is the Media Browser which can be hidden away using the disclosure arrow. Of note is a favorites section. Simply right-click on an audio file and choose to add to your favorites to find it quickly in the future. The search field makes finding audio files a simple task... and of course you can preview any files in the browser by clicking on the play button next to its name.

The central area is taken up by the wave editor. This can be set up to display multiple editors either along the horizontal or vertical axis as desired. A nice touch! The right pane contains usefully colored level meters, plug-in chain and chooser, where you can choose from a number of effect plug-ins, including the included iZotope Mastering and Repair Suite. You can access all your own AUs and VSTs very easily too. Plug-in interfaces can be opened by clicking the gear icon, and you can also choose to view an envelope for each parameter of your plug-in. More on that later. 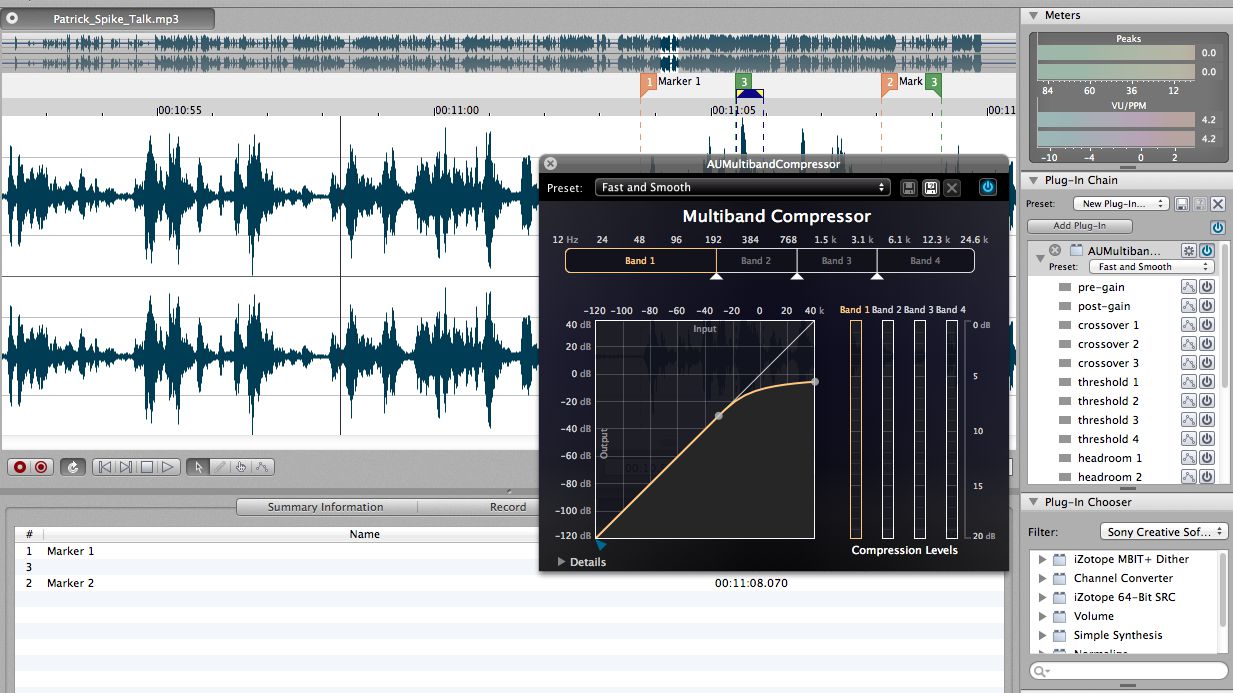 The bottom central pane can be customized to display a host of info as well as a nice large recording level meter. It's simple enough to select your input audio device from here too. The Transport and Tools selection areas are fairly self-explanatory for anyone who has used any audio application before. Don't be fooled by the clean and tidy interface, as there are a number of useful panels and options neatly stored within a click or two, but hidden away to help you concentrate on the most important tasks, namely recording and editing! 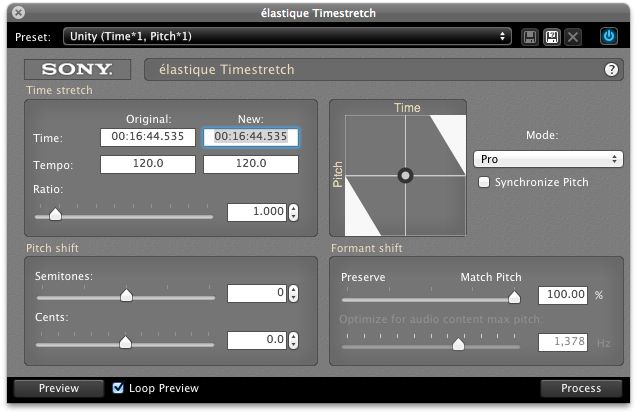 Sound Forge for Mac comes with excellent plug-ins by iZotope!

When it gets down to the nitty gritty, Sound Forge Pro is a very capable editor. You can quickly record single or multiple tracks, and of course edit them quickly. I particularly enjoyed having quick access to sections of an audio file by inserting Regions by hitting