Language
Sinevibes latest synth plug-in, Altenator, is rather unique. Every control of this monophonic synth plug-in is sequencer controlled. Noah Pred puts this synth through its paces step by step.

Sinevibes' latest virtual instrument for DAWs running on OS X comes in the form of a “motion synth” dubbed Alternator. Eschewing the ubiquitous knob and slider controls of most synthesizers, all core parameters of Alternator are strictly sequencer controlled—an intriguing proposition, but how does it stack up? 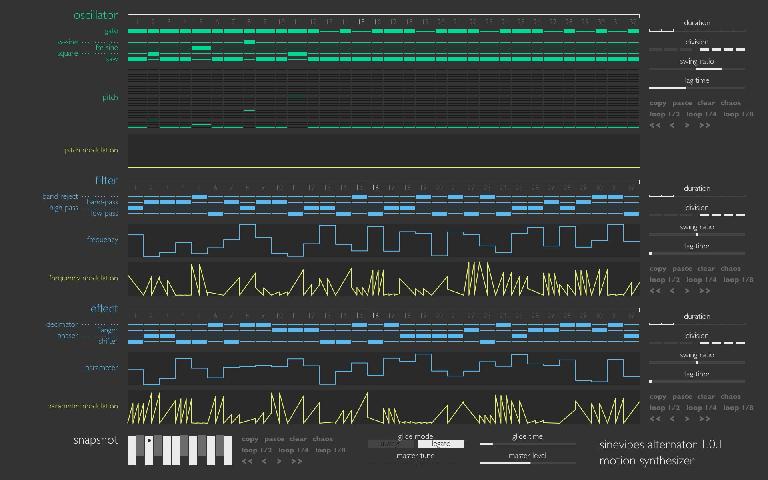 Comprised of three main sections, the top Oscillation section delivers the monophonic sound source that feeds the rest of Alternator. Along the top, the Gate sequence determines whether steps are triggered at all. Below this, four Oscillator types can be selected on a per-step basis: Saw, Square, FM Sine, and a Waveshaped Sine that boasts considerably more high-frequency content than its FM counterpart. The unadulterated Oscillators are as loud and pristine as you could want.

MIDI notes fed into the device determine the corresponding root note of the Pitch sequence, with each new MIDI note re-triggering the sequence from the start. With the root pitch set via incoming MIDI, each step can be adjusted in relation to it, making for some interesting key-change possibilities by feeding the same sequence different root notes at choice intervals.

Sinevibes' sleek user interface style suits Alternator well, though on my Retina screen I found myself wishing it were scalable more than once, as certain sections appeared just a bit too small: even with my fairly decent eyesight, counting Pitch steps required a bit of a squint. As a fail-safe, I thought a hovering note monitor or a global Scale selector—now relatively commonplace in many sequencers and controllers—could accelerate Pitch programming, but for now, dragging steps with the mouse proved the most effective way to get notes where they needed to be. Although it may take some getting used to, all of this sits well enough with Alternator's mandate to provide an unorthodox approach to sound generation.

Finally, the Pitch Modulation sequencer applies adjustable ramp sweeps on a per-step basis, with a double-click giving a double-ramp shape, and a triple-click providing a triple-ramp shape for triplet wobble edits.

Each of the three sections comes with a utility section at far right that enables discrete note duration, triplet or straight timing, positive or negative swing values, and lag time—something like legato—for each sequencer. This is also where you'll find the controls to halve, quarter, or eighth your sequence, or shift the sequence forward or backward in time at beat or bar intervals. This is also where you can copy and paste sequences from one snapshot to another—more on those later—and where you can clear a sequence to start from scratch, or randomize it entirely via the Chaos button.

The second sequencer is dedicated to a filter section, carved up between Low-Pass, High-Pass, Band-Pass, and Band-Reject models that can each be toggled on a per-step basis. Cutoff Frequency is also available for step editing, and while resonance might seem oddly missing, each filter type has been optimized to cut cleanly through the mix at most if not all frequency values. Although the Cutoff steps can seem choppy at first, increasing the Lag time at right smooth things out for more gradual changes where needed. A Frequency Modulation sequencer rounds things out with the equivalent of an envelope generator that can be applied in a variety of shapes and amounts on each step.

The final effects sequencer provides a multi-octave digital pitch Shifter, Phaser, Flanger, and bit-crushing Decimator—each of which are available, one per step. A Parameter sequencer modulates the main parameter you would expect in each case, while the Parameter Modulation sequencer allows for more intricate rhythmic tweaks; the Lag amount once again provides smoothing as needed. Ranging from sleek sheen enhancement to all-out glitch mayhem, the Effects section adds further dynamics to an already ceaseless pattern generator.

Weaving all three sequencers together easily results in delirious bleep patterns, stomping warehouse bass lines, and scintillating percussive leads. Making things even more interesting are the white brackets along the top of each sequencer which can be adjusted to determine a different length for each section, resulting in odd-length tapestries of sequenced musical data that won't repeat for a great deal longer than the default maximum length of 32 beats.

The Chaos buttons for each sequence are handy in a pinch, but in general, I found them overly extreme: for example, there's no way to randomize only the Filter Frequency without also randomizing the Modulation and Filter Type; there's also no way to specify a percentage amount of randomization for more gradual mutations from a current state. While it's a handy feature to have, I felt it could have been opened up for more sensitive tweaking.

While the Chaos feature means you can rapidly generate new iterations, the Snapshots—selectable via the first octave of a connected MIDI controller, or via automation—store up to 12 completely different sequencer settings, making Alternator a viable option on stage as well as in the studio.

The Global section at bottom contains device-wide Clear and Chaos buttons, along with copy and paste of all three sequencers from one Snapshot to another, along with simultaneous loop length and shift controls for all three sequencers. Two Glide Modes, Glide Time, Master Tune (adjustable plus or minus 12 semitones), and Master Level round out the Global controls. I personally would have liked a global filter and maybe an effect or two as well, though I get Sinevibes' streamlined aesthetic restricts what they cram into their devices, and with basic filters and effects readily available by default in most DAWs, I can see their argument against unnecessarily cluttering their streamlined interface design.

Though Alternator's overall concept may seem esoteric at first blush, there's no doubt it's useful: anyone having trouble generating material through the usual avenues should be able to get a wide range of fresh ideas in motion very quickly indeed. Whether going for deep and dirty dubstep lines or twisted techno synth loops, Alternator gives you plenty of options.

Cons: No global filter or effect sections; no scale settings for pitch editing; no global swing control; randomization can't be applied per-parameter or by a percentage amount.