Language
There's no point hiding it. Our review for Sample Logic's Cinematic Guitars Infinity is very positive. The reason? CGI is one of the most impressive instruments/sample libraries we've encountered.

For the first time in two years of writing for AskAudio, I'm at a loss of exactly how to begin a review. I didn't know exactly what to expect when I was asked to review the latest offering from Sample Logic, but I was assuming it would be a sample library of ambient guitar tones slowed down and maybe played through some nice filters to make them less 'guitar-like'. I couldn't have been more wrong, and I definitely wasn't ready for the sheer enormity and diversity of Cinematic Guitars Infinity. 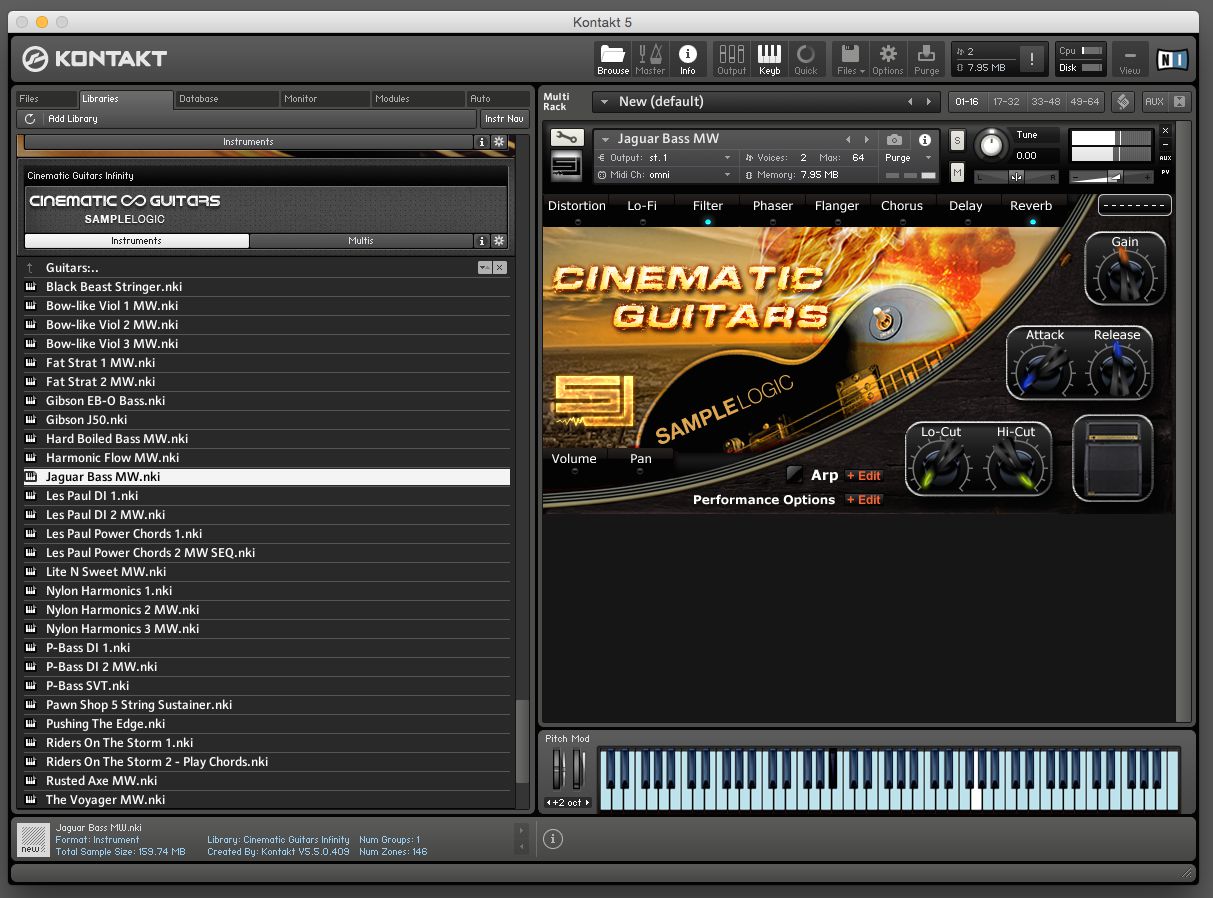 "If there's a sound that can be made with a guitar and an amp, it's in one of these libraries."

You've got access to everything from acoustic loops to lush atmospheres. If there's a sound that can be made with a guitar and an amp, it's in one of these libraries. I can almost guarantee it. There are amped sounds, direct sounds, piezo sounds, acoustic sounds… the list really goes on forever. By providing a huge stable of high-quality effects with each library, SampleLogic has managed to craft some of the most interesting presets I've ever encountered in a sampled instrument. You almost forget that the sound source is guitar after a while! 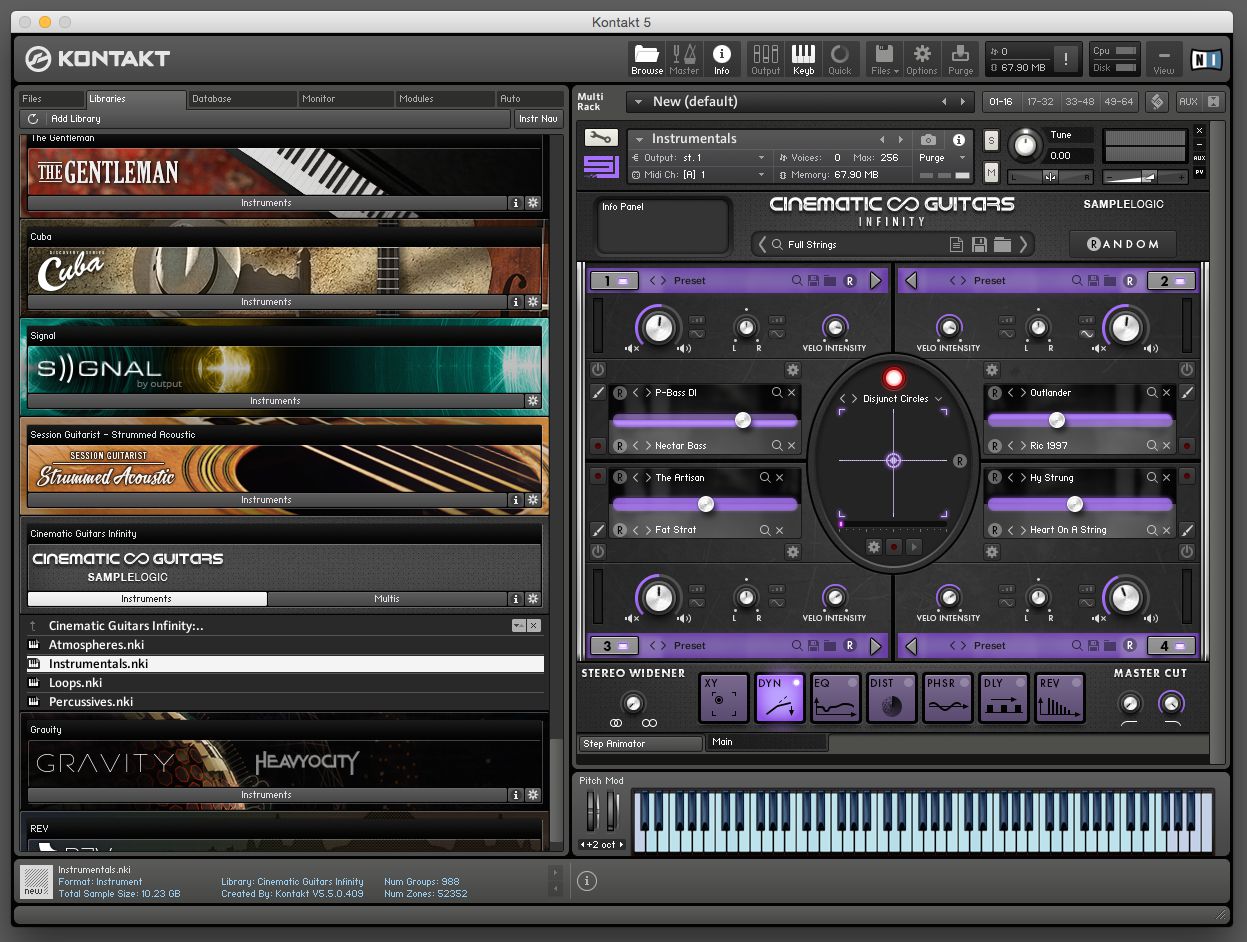 The creativity and thought that clearly went into designing the sounds for this instrument is just staggering. Every preset just 'feels' very precisely designed. The arpeggiators and step animators can utilize percussive elements of guitar tones to create drum grooves. The effect system often utilizes its own delay taps and glitches to create action-movie worthy music beds from a single note.

I kept trying to make a final decision on 'is this an instrument or a library of loops and soundscapes?' There's really just so much here that it feels like both. I was constantly making notes of favorite patches that I'd use as synth leads and pads; and at the same time marking off patches that generated entire song patterns from a single note or set of notes.

"Cinematic Guitars Infinity has some of the most interesting presets I've ever encountered in a sampled instrument."

Film composers are going to love this instrument. Most particularly if you are a producer/composer who needs a fast turnaround time. Cinematic Guitars clearly excels at helping you to create entire music cues from a single patch… sometimes even from a single note!

That's not to say sound designers and keyboard players are left out in the lurch. Quite the opposite. This instrument is highly playable. There are patches for leads, chords, pads, and more. Many elements of the effect or sample engines have been pre-mapped to the mod wheel allowing you to quickly generate alternate timbres from a single patch. There is an X/Y pad in the infinity library that is also pre-mapped to common MIDI CC values, (which happens to line up with the default setting of Komplete Kontrol! Hooray!) giving you further control of the instrument.

"I fell in love with this instrument instantly and I simply can't put it down. The sounds that CG Infinity offers are truly inspiring."

Very few instruments can turn me into a superfan in less than a few days of use. I fell in love with this instrument instantly and I simply can't put it down. The sounds that CG Infinity offers are truly inspiring, and I find myself looking for songs that I can use them on. The sheer amount of presets makes me wish it was a bit more integrated with Komplete Kontrol for the sake of easier browsing, but I'm not one to complain when you give me a huge amount of sounds for my money.

This is a library that will spark your creativity, save you time as a composer, and give you endless hours of fun while doing it. It's a major win for any Kontakt owner, and worth a look for any composer, producer, or keyboard player.