Language
There's iPad apps a plenty floating around for musicians, so what makes Cotracks stand out from the crowd? As its name suggests, Cotracks enables more than one person to collaborate on one iPad.

There are a fair few music creation apps out there for the iPad now and some of them are even emulating full-on desktop DAWs. Making iPad apps look like Logic, Cubase or Pro Tools seems to be the most popular approach but maybe there is another route? Futucraft seem to think so.

Cotracks not only looks different to your average iPad music app but it also has a really interesting concept. This app is actually designed to allow you to collaborate with other users. Up to four people can play at once… on a single iPad! Let's take a look how this all works.

First up I have to say that when I first saw this app I was pleasantly surprised. It looks like nothing else I've seen on the iPad but immediately after this I found myself wondering how to access specific parameters. 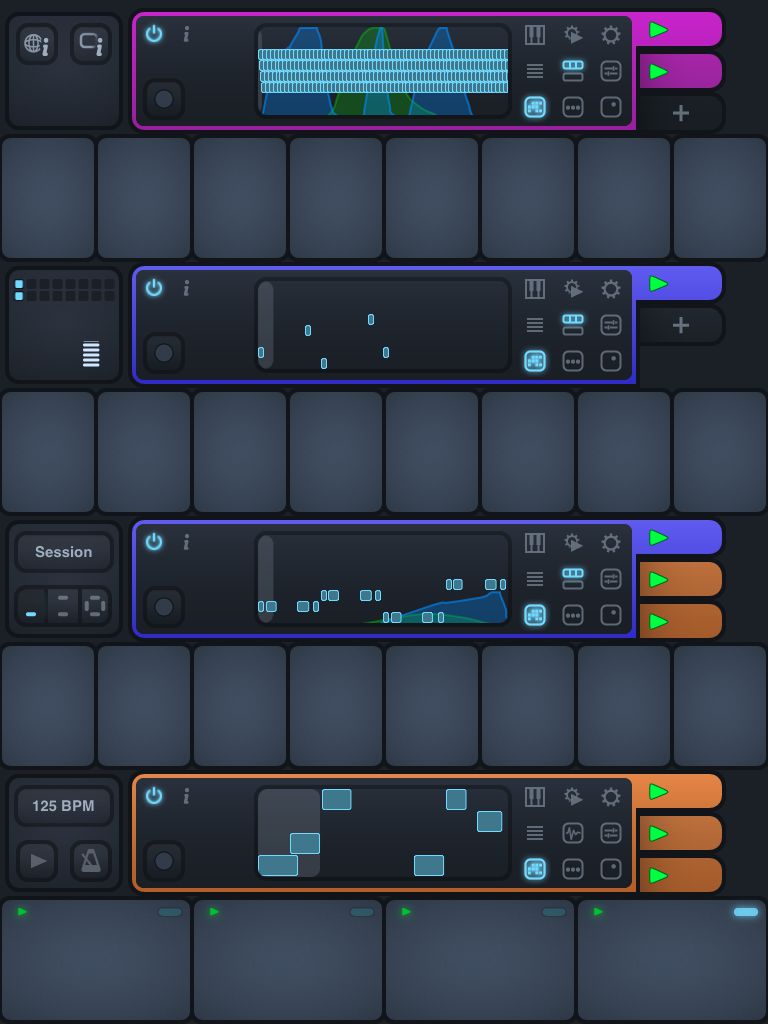 The standard view you'll be greeted with in Cotracks.

There is a serious lack of labelling here but luckily hitting the small info (i) icons anywhere in the system gives you a really nice help overlay. One glance at this in each area and I was set. Once you get the hang of the layout, it's surpassingly intuitive. 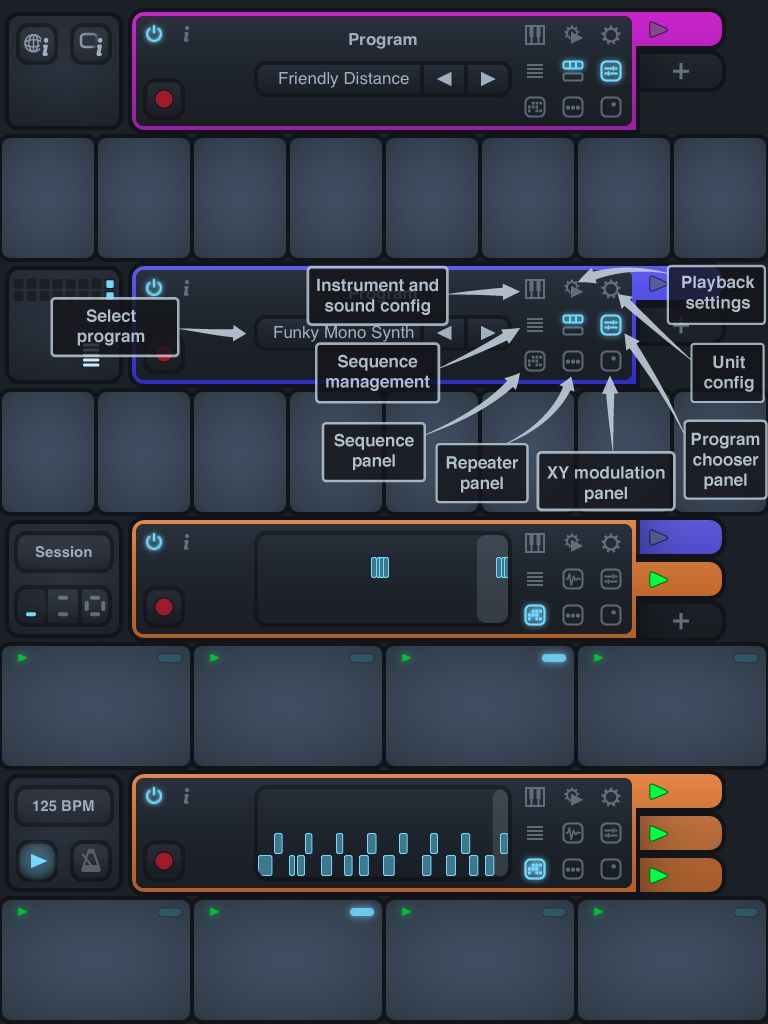 The (i) icons will reveal a very useful help view.

The screen is split up into four lanes or parts. Each of these can contain an instrument and sequence (and plenty of other data and controls). At first, I wrongly assumed this was a four part app, but I discovered later that three parts could be loaded per 'slot' essentially giving you 12 parts in total. Impressive stuff.

Although you can input patterns (using on screen drum pads or mini keys) yourself, things get a lot more fun when you start to invite others to your session. A single command can flip the screen into a double arrangement, so someone directly opposite you can join in, or click again and you will get a quad screen with controls at every side of the iPad. 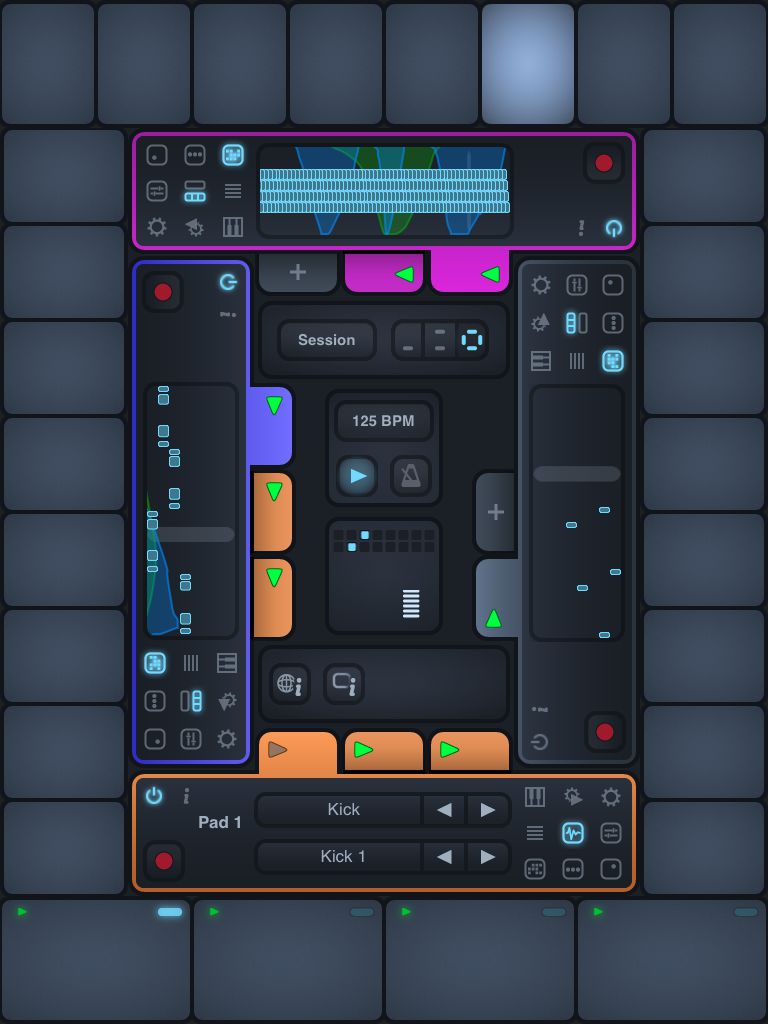 The innovative quad view allows four people to join in.

In the Quad configuration, each user can control an individual slot and have access to all three parts in that slot. This is the ingredients for a full-on electronic band on one device. I tried it out with three people, not only was it a lot of fun, but you could also easily access everything you needed to.

The sounds included in Cotracks are actually pretty impressive. The main thing that struck me was not the list of presets for each instrument (which cover pads, leads, basses etc.) but the level of control over the synth engine.

Each sound can be expanded into an advanced control panel, the controls for which vary depending on the sound. I found myself adjusting LFOs, filters, envelopes and effects types. Keep in mind this is all within one of the twelve sounds available. 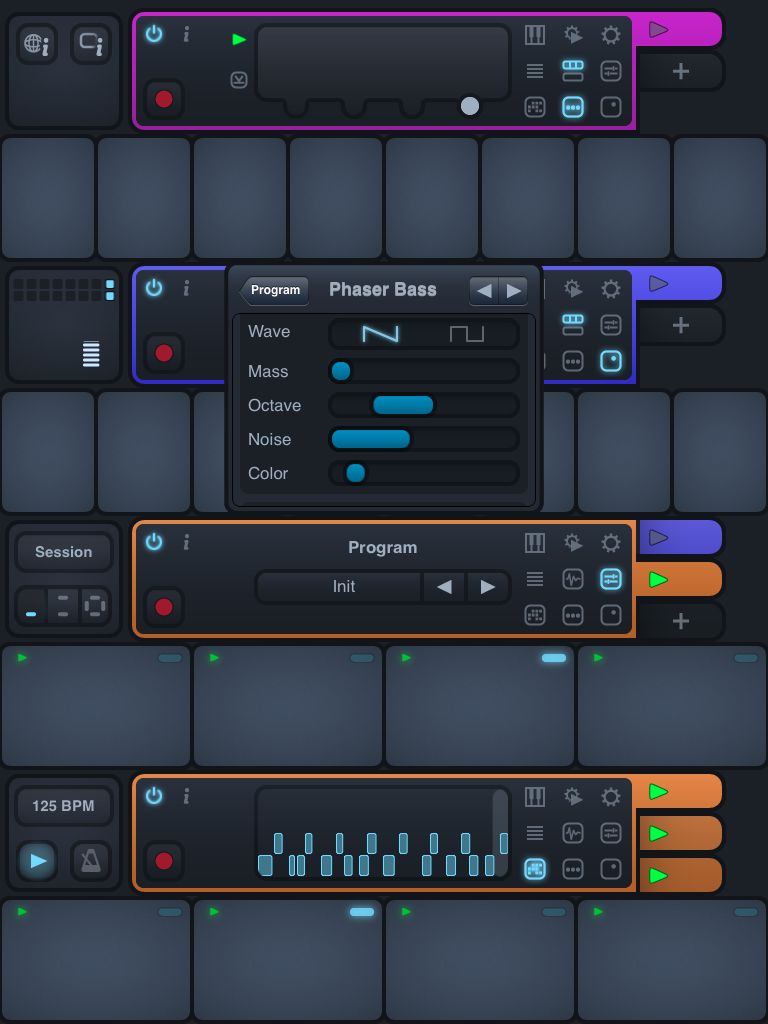 The controls for some of the instruments are quite impressive.

The whole thing sounded great and I didn't experience any glitches along the way. Bear in mind I didn't spend a huge amount of time with the software so I would recommend really putting it through its paces if you plan to use it live or in any critical situation.

I genuinely enjoyed testing and using Cotracks mainly due to the fact that it feels truly innovative. The interface alone is different enough to deserve accolades, and the fact that up to four people can play together on one iPad has got to be a first. 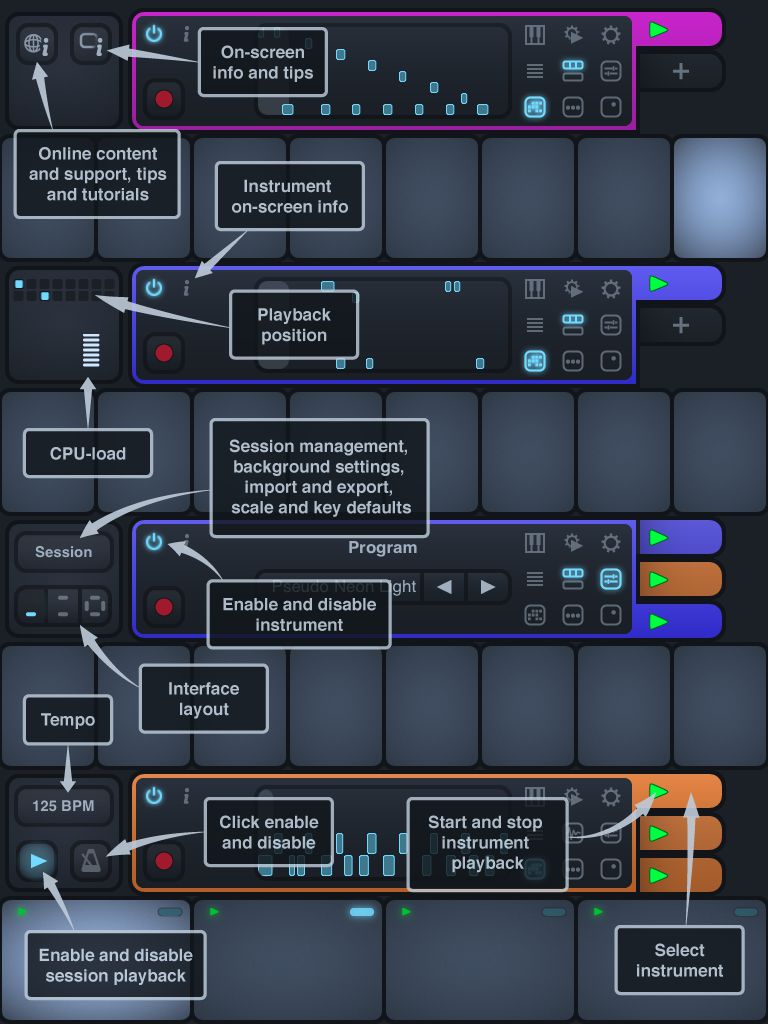 Some more help info displaying many of the main screens controls.

There are a few things that I would have like to have seen implemented here. A mixer would have been useful and was something I found myself searching for. You can adjust the level of parts but it means diving into the edit menus.

Also the ability to overdub would be welcomed. When you hit record to adjust a part it appears that it wipes your previous recording. Maybe a separate button for overdub could be added, this would make workflow a whole lot better.

These minor gripes aside, I would strongly suggest giving Cotracks a spin. It's a bit of a bargain and should keep you (and up to three friends) entertained.