Language
edjing 5 (free) and edjing Pro have been on our radar for some time. DJ Sara Sims puts both these mobile DJing app solutions to the test and looks at how viable iPad is as a DJing platform. 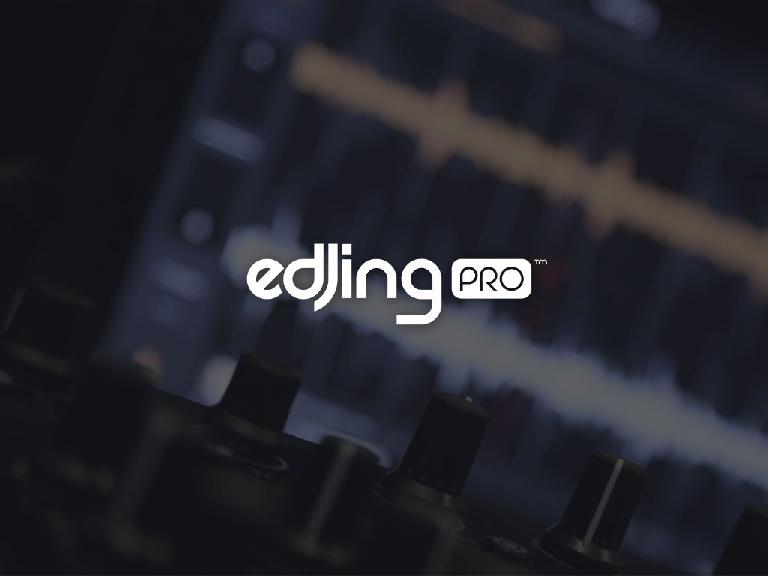 According to their site, edjing claims to be the world's #1 DJ app. Would a free DJ app really allow DJs to blend together music professionally? I decided to give it a test spin. Here's what I discovered...

They say the best things in life are free, right? In the case of edjing 5, this may be true. As soon as I opened the app, I instantly liked the GUI; the two turntables reminded me of the good 'ol days of raves and DJing. edjing 5 is clearly laid out and it will be easy for DJs to learn how to load and play tracks in the app. 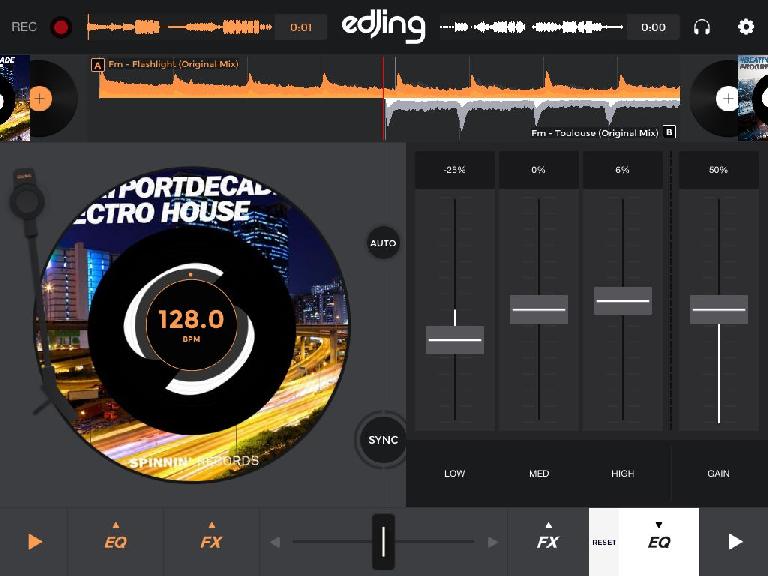 Play and pause buttons are located in the bottom left-hand and right-hand corners, with the EQ section right next to it. The EQs react quickly to motion and carve out the sound well. Beside the EQ is the channel fader which controls the overall volume in the track. The FX section is beside the EQs; opening the FX gives DJs access to the loops, hot cues and flanger. There's a button for filters here too, which is really a tease as you do need to upgrade to the full version in order to use them. 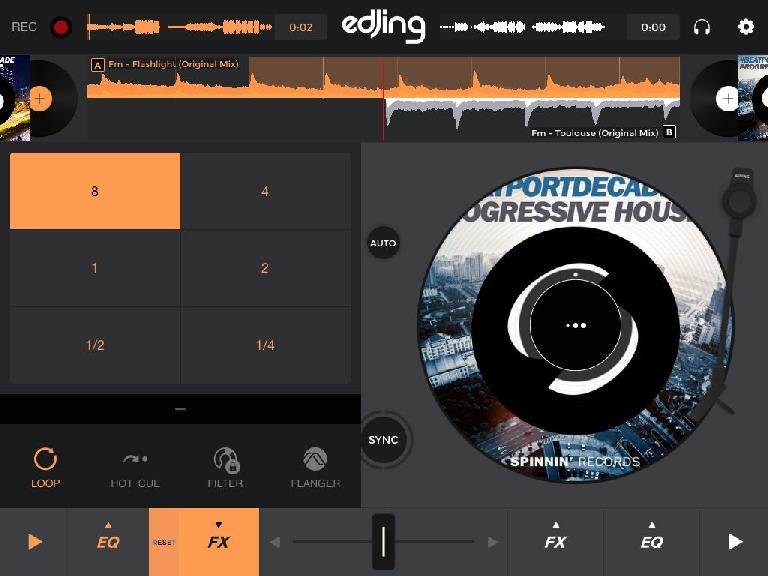 The loop feature works well, it's quantized to the beat so that loops will sound perfect even if they're dropped slightly off time. Up to four cues can be set on each track and easily cleared if they're incorrectly placed. The flanger sounds good and is easy to use, although if I had the choice of only one effect I would have preferred to have a filter rather than the flanger. 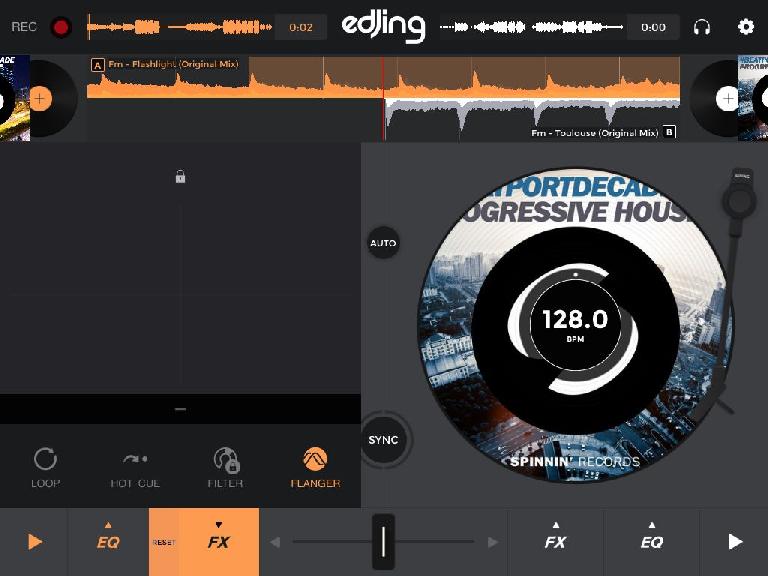 Mixes can be recorded, and then instantly shared on Facebook, Twitter, or Google plus and MP3s can be sent via email. While these are all great features, I actually wish that it was possible to export higher quality WAV files. I can't complain too much as a record option on a free app is a good thing!

The most impressive feature in the settings is the ability to change the cross fader curves; DJs can choose from eight different curves. It's amazing to me this feature is so developed, especially considering edjing 5 is free. 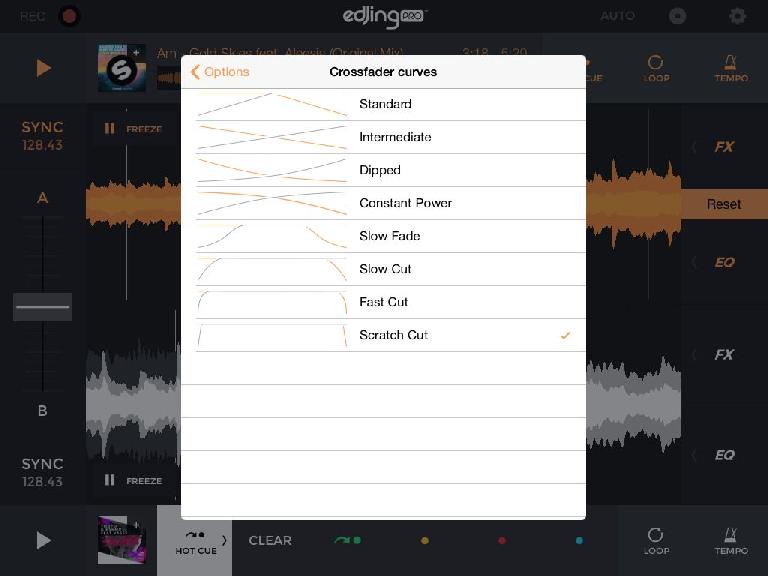 The only thing edjing 5 is really missing is a headphone cue feature, so you can cue up your tracks. To me, this makes the app better suited for use for fun home or office parties, rather than professional situations. If you want to be able to preview tunes with headphones, you'll have to cough up the big bucks for the pro version of the app.

Cons: No headphone cue. It's unfortunate that this wasn't included, but it makes sense that if you like the app, you'll pay to upgrade to edjing Pro.

After giving this a test spin, I much prefer the edjing Pro to edjing 5. While the free version is a great starter app, edjing Pro has been carefully designed and includes important features like headphone cue, the trendy Freeze mode and an arsenal of creative 'color' effects. 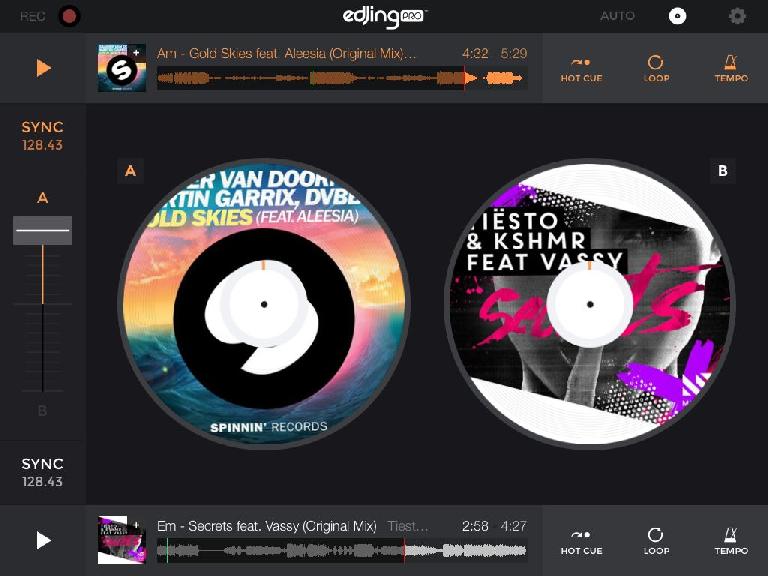 There are two different layouts in edjing Pro; a spectral view and a turntable one. The spectral view shows the waveforms of each of the tracks and visually represents the track's frequencies with variations in color. The turntable view is really cute and fun to use; the decks can be used to do some basic baby scratching and nice to see the album artwork. In most situations, it's probably going to be more practical to use spectral view but the turntablists out there will appreciate edjing Pro's efforts to include a view just for them. 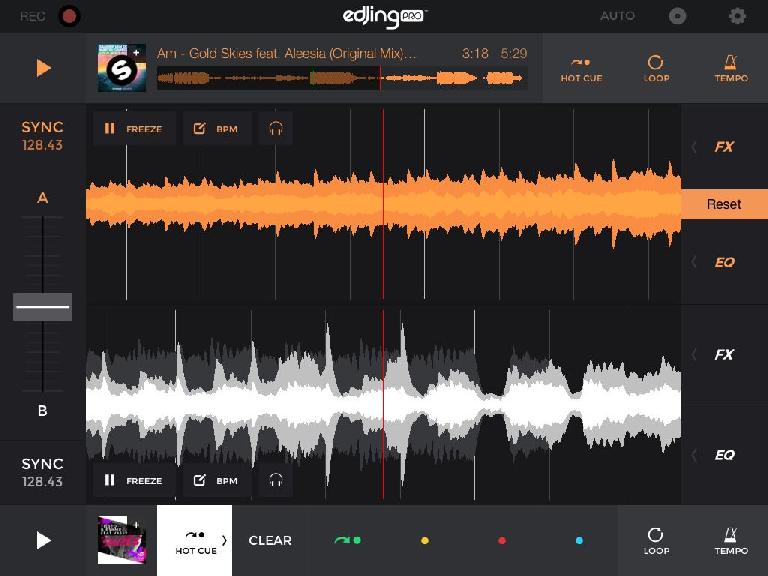 The spectral view layout is similar to the Traktor DJ app, with two decks available for mixing. Tracks can be easily loaded up from iTunes or streamed from SoundCloud. Across the top there's hot cues, loops and tempo adjust. The loop can be set anywhere from 1/32 all the way to 16 beats. Loops can be easily set by pressing the Loop Set button and Unset by using the same button and loop length can be set on the fly by using the plus and minus buttons. The tempo of the track can be adjusted using the pitch slider, which responds quickly to touch. The tempo adjust may throw some DJs off, as it is positioned horizontally (instead of vertically). There's also plus/minus buttons that allow you to gently nudge the track into place. Like edjing 5, edjing Pro includes a record function so DJs are able to record and share their sets.

The crossfader for the app is positioned horizontally, which is a little different than on most DJ mixers! With a little practise most DJs should be able to adapt to using this. edjing Pro features eight different cross fader curves, which is great as many other apps would choose to only include one or two cross fader curves. I was personally impressed to note the variety of curves available, even though the only curve I ever use is the Scratch Cut. (Note: these curves are also available in edjing 5 too) 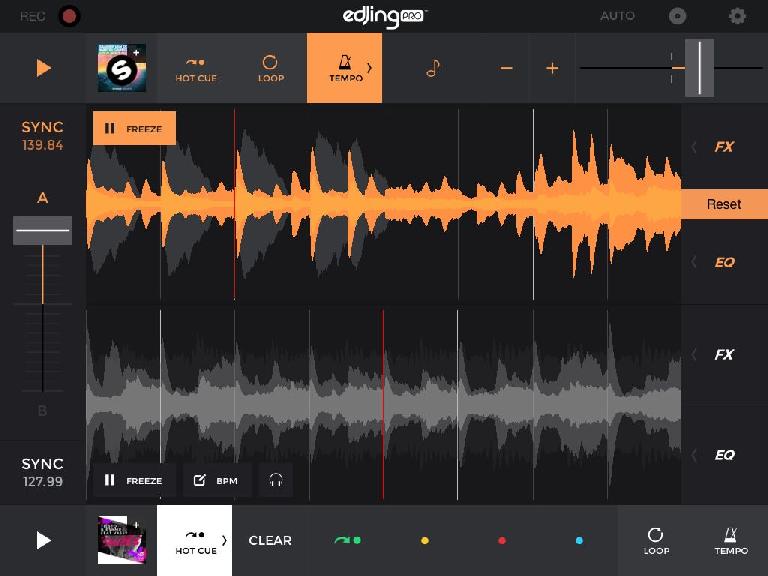 The freeze function is a really cool feature that DJs will like. It does just what it says it does; freezes a portion of the track while the track continues to play on. The part of the track that is visible on the screen is broken down into eight individual parts that can be played by hitting them. Although it's likely the Freeze function will appeal to mainly to controllerists and DJs who make routines, any type of DJ could make creative use of the Freeze function. I found the automatic analysis of each track to be fairly accurate. Manual adjustments can be made to the BPM by tapping them in using the 'tap the BPM' button. Lastly, each track can be cued by pressing the headphone cue button. 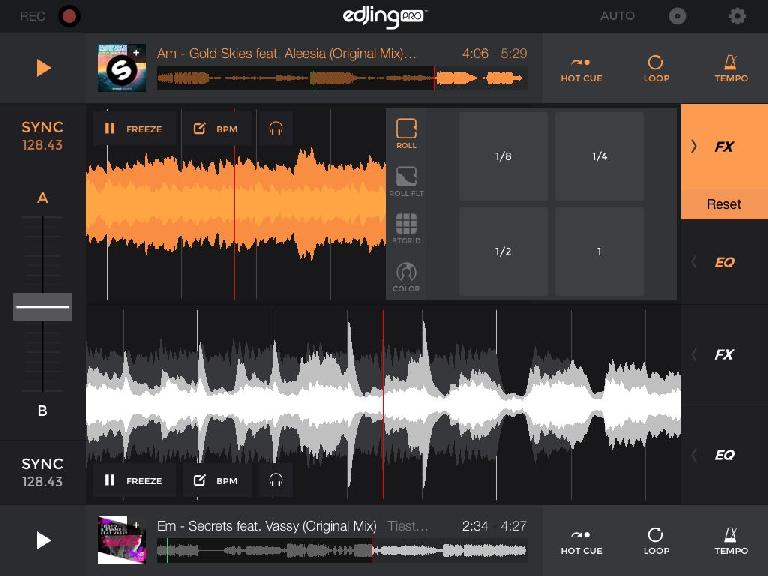 One of the most fun features in edjing Pro is the effects! At the top of the effect are Roll and Roll Filter, which both sound good and are laid out in a square grid. Below the Rolls is the BT Grid, (I think this stands for beat grid) which turned out to be one of my favorite effects. It's a little similar to Traktor's Beatmasher 2 and has a good delay effect that's useful when you want to hear the sound of your snares repeating in different percussive patterns. 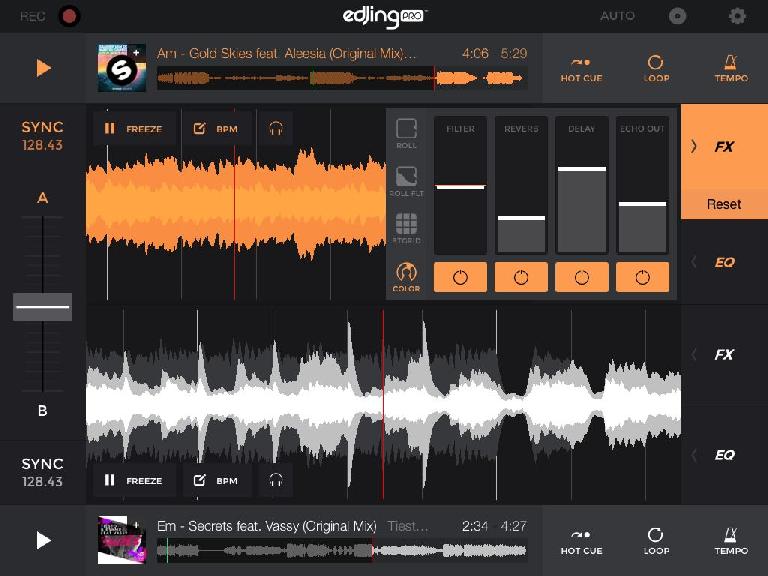 Lastly, there's the Color effects, which are standard effects like Filter, Reverb, Delay and Echo Out. Each effect can be turned on and off at the bottom, and the intensity of each effect is controlled by a volume slider. All the effects can be applied at once, and edjing Pro allows you to combine effects from the different FX sections together to build FX chains. I would have personally liked it if the FX section was laid out so that the roll and color effects could be accessed at the same time; eg. If the FX section had a horizontal layout rather than one where only one section can be visible at a time. The small rectangular layout of the effects make sense when they're opened up beside the EQs. The EQ section includes a three band EQ and volume fader for each channel. No complaints here, everything works well and the faders respond quickly to touch. 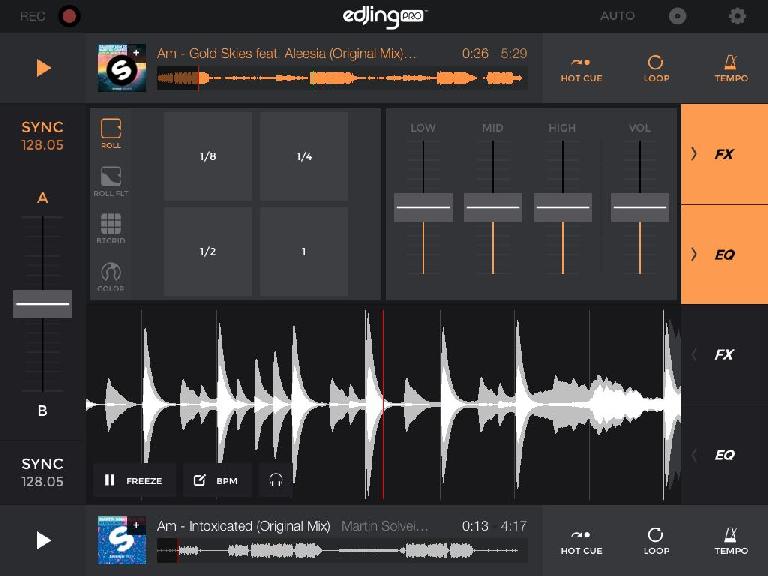 Not sure where to start? Edjing Pro includes a handful of short video tutorials that teach DJs how to use the fx, make loops, use the freeze function and more. I love the fact that these tutorials can be accessed from right inside the app. They're all about 30 seconds long and allow DJs to learn to use the features quickly and easily. Nice work here edjing!

Overall, edjing Pro is a great app that can be used by both professional and beginner DJs. It has a good layout and that allows DJs to mix together two tracks, loop and add some cool sounding FX. For $7.99, this app is a great deal and gives DJs the ability to spin tracks from their iPad. The question is, are you brave enough to venture into the futuristic world of iPad Djing?

Pros: The FX Section, Freeze feature, Easy to mix with.

Cons: The vertical cross fader's position on the left hand side of app may take time to get used to. In the turntable view, I feel that it would have been better to position the crossfader in the traditional position; below the turntables. However, don't let this stop you from trying out a very cool (and fun!) DJ app.

Available from: Both versions are available in the App Store, on Google Play, Windows 8 and Amazon.com. Edjing pro is $7.99 USD.