Waves makes many fine plug-ins, but with Grand Rhapsody they have tried to capture the very soul of a particular instrument from a famous London studio. Did they succeed?

There are more than several great virtual pianos out there. And all of them have famous names mentioned that go along with them, all of them cost a pretty penny. Waves has recently released the Grand Rhapsody, an intimate virtual recreation of the famous Fazioli F228. The exact same Fazioli that was used for Adele’s “Hello” and many more famous acts who’ve rolled through doors of London’s Metropolis Studio. In doing so, they’ve worked tirelessly to give you not only a beautiful sound but also a piano you can actually use in your own work, at a price that’s more than affordable. How did they do?

Like you may have guessed, there are a lot of samples to download for the Grand Rhapsody, like all other great libraries. After completing the 14 GB download, I was ready to begin playing a piano I’d often admired on my wife’s often played Adele tracks through out the house while doing laundry. Funny enough, while my wife was cleaning and doing her thing around the house, I finally struck a key on the Grand Rhapsody… just a few key strokes, after hearing countless pianos around the house. I hear a “What was that?”, coming from the kitchen. She recognized the piano!  And that’s the cool thing about the Grand Rhapsody, it has a distinctly recognizable sound, beyond just sounding pretty.

Thankfully, you aren’t locked in to doing the 14 GB download, just in case you are short on space there is also a 6 GB standard definition version of the library that still sounds quite amazing, while being compact enough to survive for a long time on a laptop. For laptop users as well as pro level users there are several additional features beyond just being a great piano that will make this piano popular with players as well as producers.

No Pedals, No Problem… 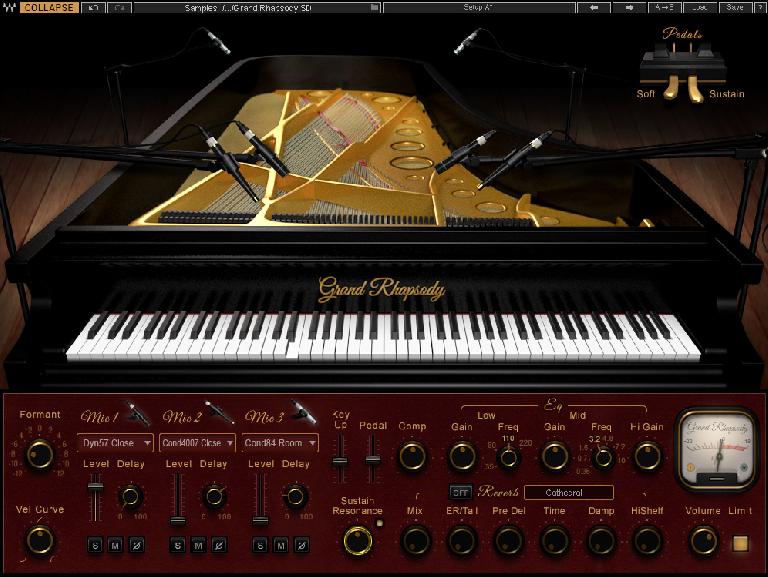 One feature the home producer or producer on the go will appreciate is the ability to just raise the sustain pedal lever rather than having to dig around for the right CC number within your DAW. Waves has set up the Grand Rhapsody with a dedicated Sustain Pedal knob. Raising this raises the actual CC 67, regular assignment. So, regardless of how ‘on the go’ you are, you can still express yourself and your music the way you want.

Several mics (U87, SM58, KM84,RN17 and more) were used to capture the Fazioli F228. Thankfully you can stack up to 3 microphone arrays of the piano and in many different mic combinations, as well as create a mix, modify the delay between the three microphones and enable a Waves-created reverb. The result when fully populated is a piano that has a pretty much endless sustain, and can cut through like a guitar as well as blend in the back, creating a mood that would make an angel cry. Not only are you getting the recordings of the piano, in Studio A, at London’s Metropolis Studios but did I mention you are getting the room too? This is thanks to microphones positioned to record the piano direct as well as microphones positioned just to get the nuances and character of the Fazioli, within Studio A.

The Grand Rhapsody is such a beautiful instrument that it almost pains me to call virtual. It’s not really configured like that. It’s configured to be something that looks and sounds personal, while still sounding pro. A lot of heart was put in to it, and you can feel it, hear it, and see it. And it comes at a price that really will make your heart skip a beat.

Pros: An amazingly powerful virtual piano that is both highly configureable and sounds much more expensive than the price that it’s going for.