Blue's compact mic and software bundle is designed for podcasters and journalists as well as anyone making music. With Mac, PC, iOS and Android compatibility, could it be the only solution you need?

Blue used to be known as Blue Mics, but now makes a range of different products, hence the shortened name. Raspberry Studio however is a microphone bundle, one aimed at a variety of users who need high quality, no-fuss recording to their Mac, PC, iOS or Android device. Since the built-in mics in most devices are best described as “functional”, the ability to add a professional microphone without also needing an audio interface is very handy indeed. Blue has pioneered the use of USB technology in mics, being among the first to really nail it and it’s certainly no longer the novelty it was when it first appeared many years ago. 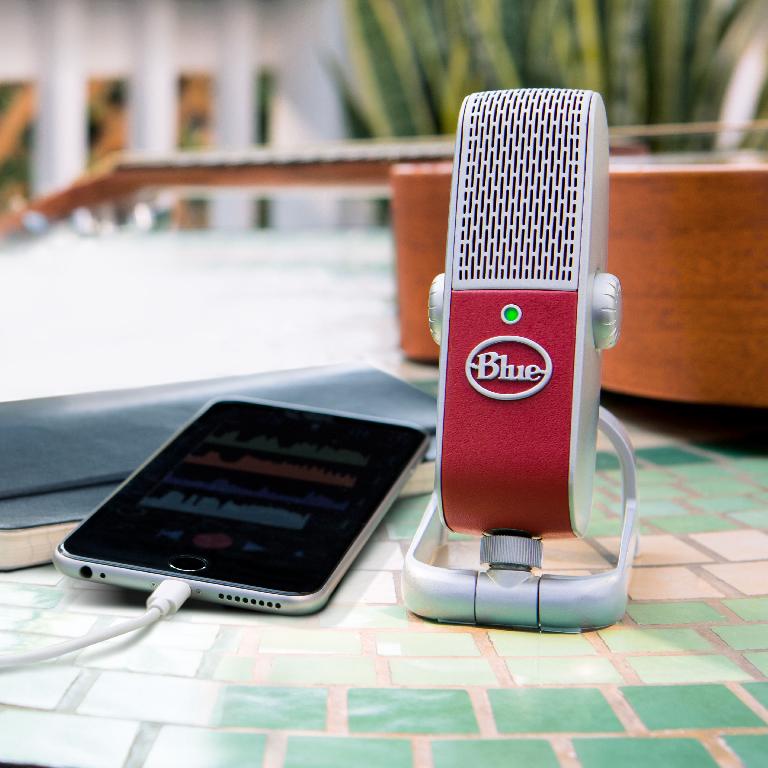 Raspberry Studio has two components: the mic and the software. The mic is a lightweight but solidly constructed model with a pleasing, slightly retro design. It comes with a stand that helps it stay upright and also absorbs some vibrations from whatever surface it sits on. It can also be mounted on either a camera or mic stand so it doesn’t always have to sit straight on a table. It powers over USB or Lightning and cables are supplied for both, with plug and play 24-bit 48kHz operation on all platforms except Android, which is rather spottier in terms of supporting audio input peripherals. On my Mac, iPad and iPhone it worked straight off, as it did when tested with a studio PC. Latency was pretty much nonexistent thanks to the ability to direct monitor via the onboard headphone output.

Internally, the Raspberry is using a patented Blue capsule that has been designed to deliver large-diaphragm performance in a smaller form factor. It’s a 14mm electret condenser with a unidirectional cardioid polar pattern, a frequency response of 20Hz – 20kHz and a maximum SPL of 120dB. There’s an onboard adjustable gain knob that lets you add anything up to +40dB of level and as mentioned a 2.5mm headphone out, plus the USB port. In tests I was able to get plenty of level out of the mic, raising this slightly when I needed to be positioned further away. 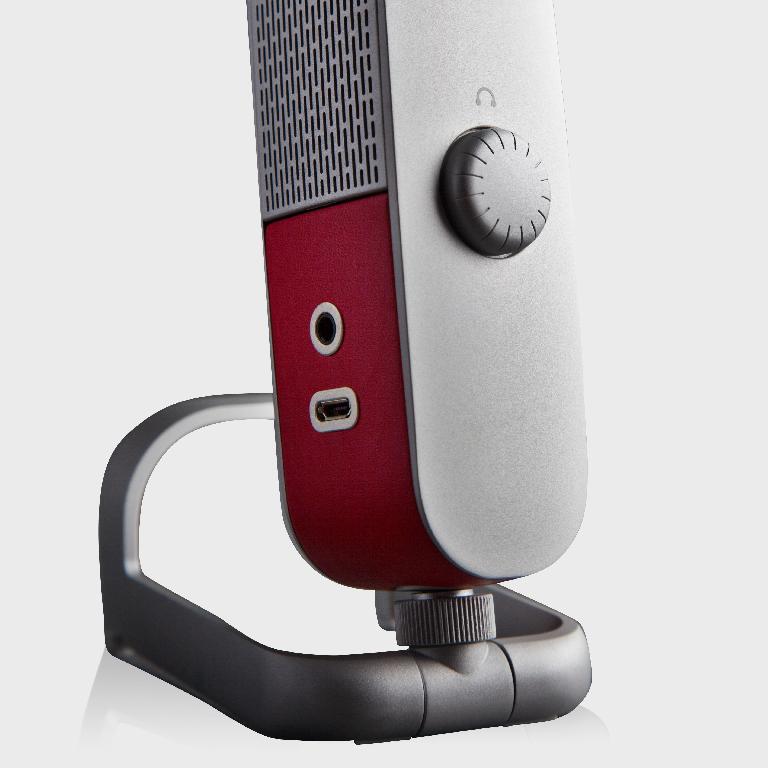 Interestingly, the mic has an internal acoustic diffuser (IAD) inspired by the treatments found in studios and concert halls. This is a sort of series of micro-baffles which are intended to focus the sound going into the mic while rejecting more of the room tone that you almost never want to include. It does seem to be pretty effective at this, offering a more focused sound capture than I expected, especially when up close. Of course I’d still recommend gating your vocal in software during recording (more on this shortly) to cut out as much background noise as possible, as a general rule. But it’s a welcome addition nonetheless. 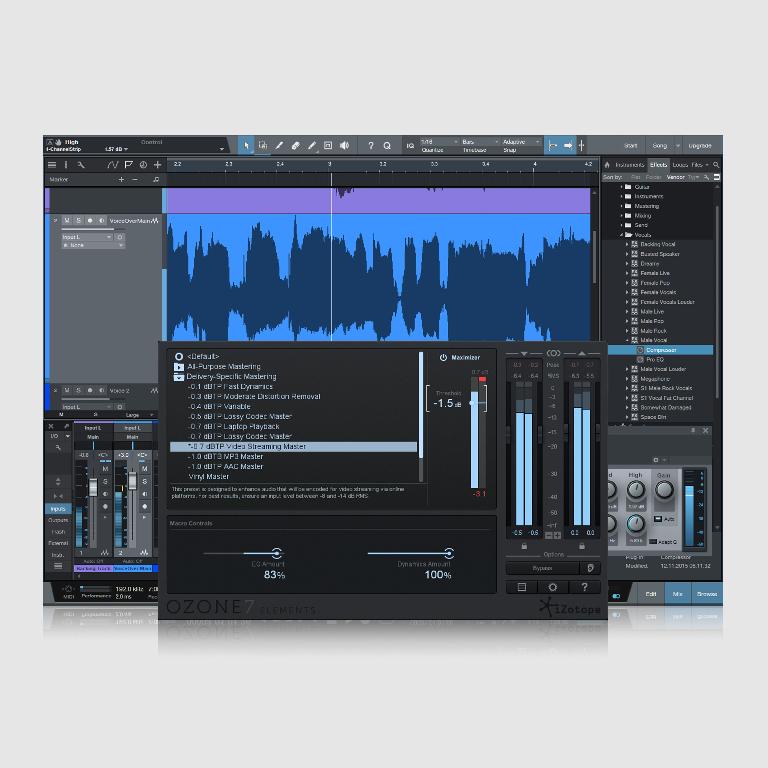 The second half of the “Studio” is formed of software. You get Presonus Studio One Artist and iZotope Ozone Elements. The former is actually the mid level version of Studio One (not the most basic) and has an impressive feature set, especially for something that is being bundled with hardware. You can see a full feature rundown here. It’s a powerful, multi-talented DAW and has everything you need to record and edit audio and make music or podcast productions. Of course you may already have a DAW or prefer an alternative system, but for those who don’t, it’s good to have. 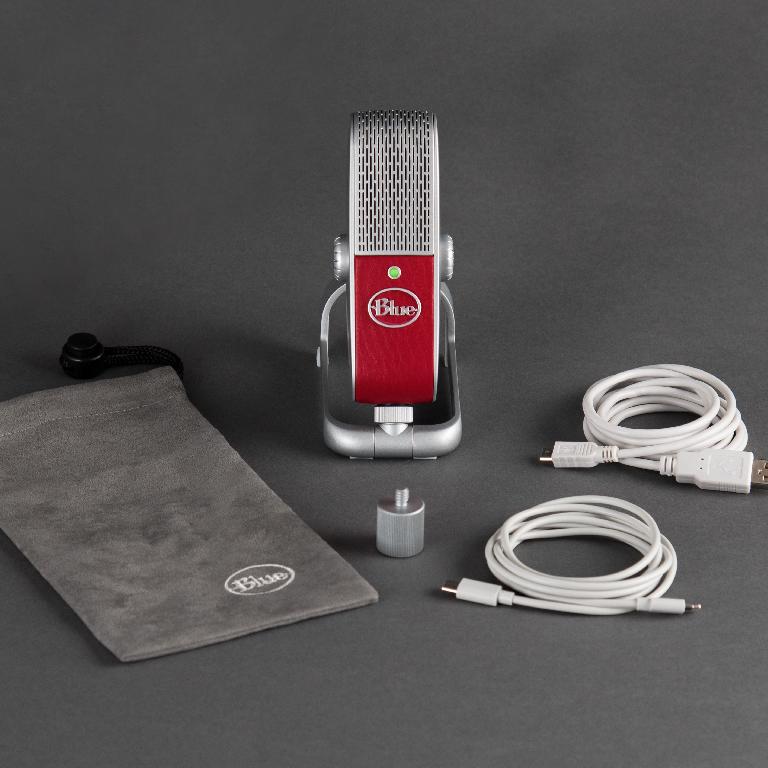 iZotope Ozone Elements is also included, which is a cut-down but still very useful plug-in for mastering your tracks. It’s slightly confusing that a mastering plug has been bundled rather than iZotope’s dedicated voice processing tool, Nectar (Elements). Not that Ozone isn’t great to have, but Nectar would have been a more obvious choice given the focus of this package on voice recording, podcasting and the like. They would seem to have opted to put the emphasis on music production rather than just vocals, which I suppose does make the software bundle useful to a wider range of people. On another note, the software does benefit from a selection of quickstart templates for music, podcasting, voiceover and more that can be downloaded from the website and provide an easy way for example to knock together a podcast pretty quickly.

Raspberry Studio is a great all-in-one way to record your voice to your Mac, PC or mobile device. You can of course use it to record instruments thanks to its flexible mic stand adapter, and it’s a good way to do this without lugging around loads of extra interfaces. It’s arguably not going to replace your higher end studio condenser, but then studio mics also come with a different set of requirements.

What is particularly interesting about this mic is how easily it works with iPhones and iPads, powering and sending and receiving sound down the Lightning cable so you can monitor and record easily with no appreciable latency. I was going to talk about how they should have included an iOS DAW in the bundle as well, but then I remembered that Apple had made GarageBand for iOS free some time ago and so there’s really no need. Yes, there are more capable iOS DAWs like Cubasis and Auria, but GarageBand will be enough for many people.

The prospect of taking this small, portable mic in its carry case and just your phone or iPad along to record an interview or a podcast is appealing. Yes, you may have a larger setup in your studio but this really is super portable if you want to travel light. Or if in fact you don’t have any other gear, it’ll do for your studio too. I’d still turn to a studio condenser for serious instrument recording (partly because I have that option) but it’s certainly no slouch. As a portable recording setup for computer and mobile, Raspberry Studio punches above its weight.

Cons: iZotope Nectar Elements might have been a more obvious choice to include than Ozone Elements.

Learn more about audio recording in the AskAudio Academy here.