A mixer is an essential part of most music setups, but what if your needs are relatively modest? Behringer aims to deliver flexibility at a competitive price.

Small format mixers might not seem like the most exhilarating category of music gear but they are a necessity for any producer who is not working entirely in-the-box. If you want to record and monitor hardware instruments you can use your audio interface but that by definition usually involves having the computer running. With a hardware mixer you have the option of using it without a computer and you also get features like genuine zero latency monitoring that aren’t always available in software-driven gear.

Many people working at home have no need of large mixers: they are neither recording whole drum kits nor running tons of outboard gear. But they still need a way to connect and mix instruments, mics, headphones and monitors. Perhaps they are running a PA for small gigs, that sort of thing. For people such as these, Behringer makes (amongst many other things) a range of portable mixers including the QX602MP3. 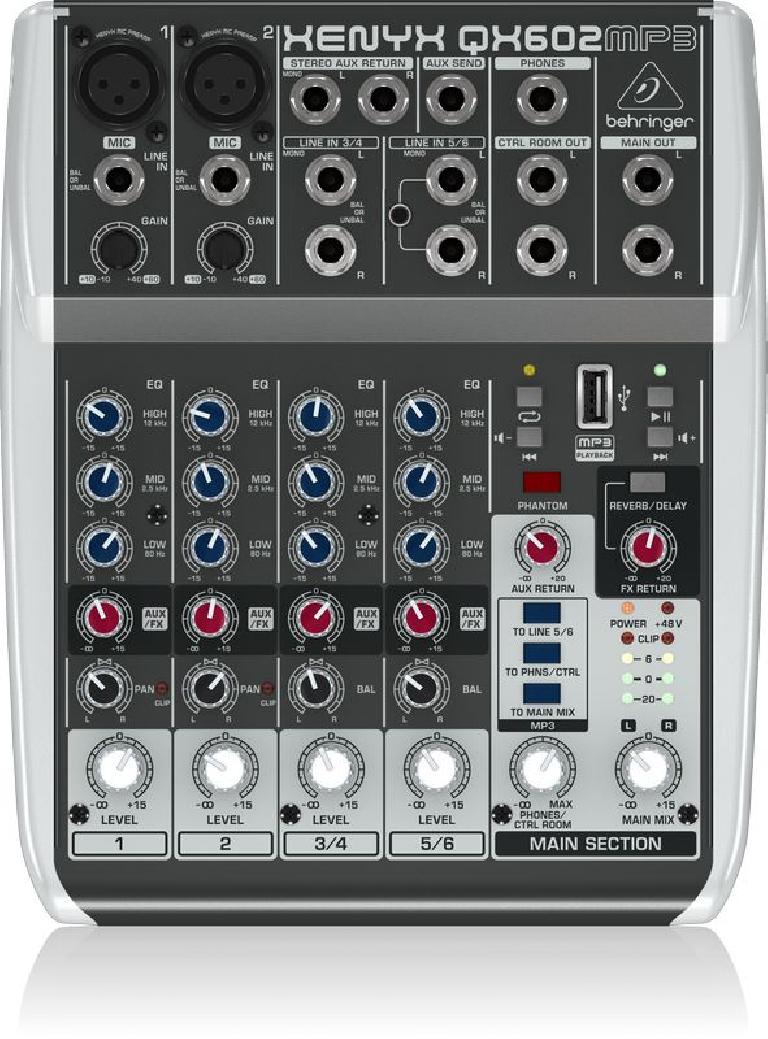 It’s a 6-input, 2-bus mixer with a compact footprint (although it’s not the smallest they make) and finished in very solid aluminium. An internal power supply means no unsightly wall-wart and it also adapts to your country’s voltage automatically. There are two mono inputs with a choice of XLR or jack ports plus gain controls. These use XENYX mic preamps and are where you would connect your mic or guitar / bass inputs. The other two physical channels are stereo, balanced and high-headroom, for connecting keyboards, drum machines or other sources. There are no phono inputs though conversion cables can be added fairly cheaply. 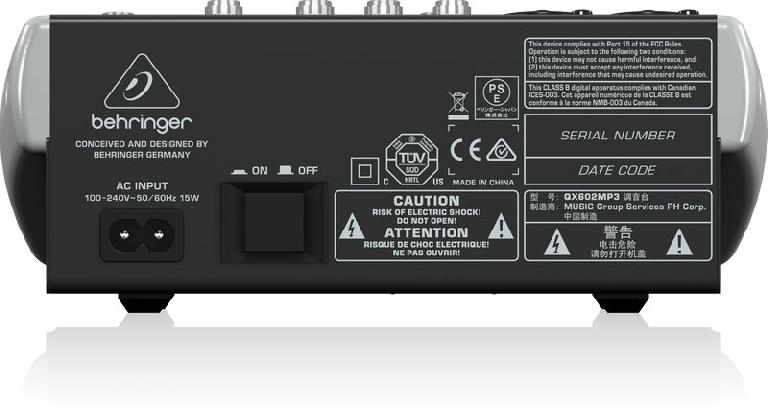 Each channel has a three-band sweepable “British” EQ and there are main stereo outs, control room outs and a single headphone jack. There’s a stereo aux return for connecting hardware effects and this is assignable per-channel using the Aux knob. More interesting is an onboard 24-bit stereo FX processor with reverb and delay and the Aux knobs control this too. The idea is that you can add some FX into each channel, be it for live sound or for monitoring. It’s a welcome addition, especially at this competitive price.

Now for the interesting bit: an onboard MP3 player. This isn’t for direct audio streaming from a phone or iPad – for that you would connect its headphone out to a stereo channel via an appropriate cable. Here, you can insert an MP3 stick loaded with music and play tracks back using the play, pause, skip, loop and volume controls in the MP3 section. Your stick will need to be formatted in FAT 16 or 32 format which is pretty standard for low level USB support. Mac users can do this using Disk Utility and Windows users will probably already be using this format. Annoyingly, WAV and AIF formats don’t seem to be supported. Not a deal breaker, but potentially adds extra steps when preparing music.

The MP3 signal can be easily fed to sections of the mixer using the TO buttons: channel 5/6, phones / control room and the main mix. These aren’t exclusive so you can send it to one, two or all three at the same time. Minor format niggles aside, it does work perfectly well.

The QX602MP3 is a great little mixer that has a clean sound, plenty of power and a good feature set for home studios and also smaller live sound applications. It’s also very well built and competitively priced. Behringer makes a lot of different small format mixers with varied feature sets: some have USB audio interfaces, some are pocket sized and so on. If you have a specific thing that you need, explore their range and you’ll probably find it. As it is, this model is flexible enough for all kinds of uses, and it won’t break the bank.