I have used the same audio interface for years and have been happy with it. It is a pci-e interface and is consistently ranked among the best for low latency performance. I have always thought the converters sound pretty good, if not elite. 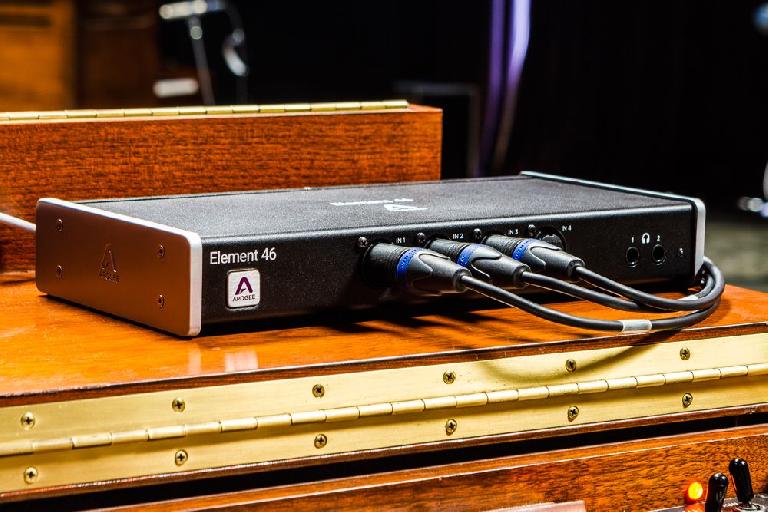 So with all the affordable Firewire and USB interfaces that have come out in recent years, I have been mostly uninterested, since they would have more latency. But Thunderbolt is essentially pci-e over a cable, so the potential for it to be as low latency and with Thunderbolt 2 and now 3, even less latency, my interest was piqued, as there is no longer any Macintosh computer that allows for pci-e without the use of a chassis. Apple has clearly decided to move on from pci-e and since I am a Logic Pro X user, I decided it was time for me to explore some options.

I have always thought highly of Apogee’s interfaces sonically and friends who I respect recently bought an Ensemble Thunderbolt and he is very enthusiastic about the low latency and excellent converters that it has. However, it costs $2500.00 approx., has way more I/O than I need, and with my budgets at the level they are these days, that purchase was not going to happen.

I was really surprised when Apogee announced that they were unveiling a new line of Thunderbolt audio interfaces named the Element series that promised Thunderbolt low latency performance, and the very same converters that are in the Ensemble. And while I am not a jingoist, the fact that it is made in the US is something that as an American, who generally has to buy electronics built in other countries like China, is attractive to me.

There are three models, the Element 24,46, and 88, with list prices ranging from $595 to $1495. In Pic 1 you can see a comparison of what they offer. The only real differences are the number of ins/outs and combi mic pres/line inputs. Any two of them can be combined with each other, so you have expandability if you decide that you need it later on. 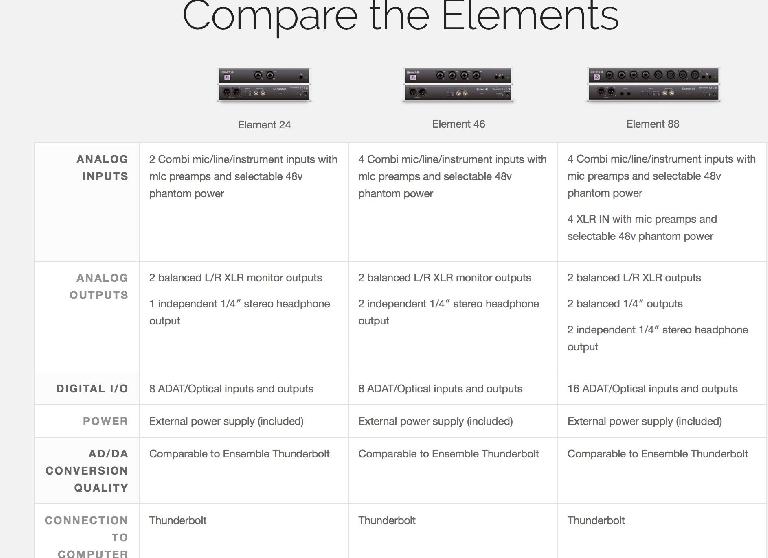 I decided to review the 24, since for my purposes it has all that I require. I fully expected to like it, but not necessarily to like it so much that I would actually buy it. But I will.

The build quality is very solid feeling, nothing cheap feeling about it. However, it does not include a Thunderbolt cable.

The first thing I did was open a very large Logic Pro X/ VE Pro 6 cue that features lots of demanding virtual instruments and sample libraries, with a lot of UAD plug-ins. With my present interface, I can run it reliably at a 256 buffer which is pretty good as with most Firewire/USB interfaces it would probably require a 512 setting with my computer. Well, with the Element 24 I can run it at 128. So far, so good.

Now this is not a scientific comparison and it is possibly psychoacoustics, but listening back, the D/A converters sounded more open and detailed than what I have been hearing on my rig for the past few years. Either way, I really liked what I was hearing and felt that my mixes would probably improve and certainly would not suffer.

My next step was to record myself singing through the mic pre. I love the fact that the Element 24 is so well integrated with Logic Pro, so that I can set the input level directly in Logic and even send top FX with it. I did so and found the mic-pre to be excellent, with a good amount of gain (up to 75 dB) and very clean. Not a “mojo” mic pre with a lot of character, but very good indeed. The same is true of the headphone output.

In the image below, you can see the front and back panel of the Element 24.

Pic 2: The front and back panel of the Element 24

One thing notably absent is the familiar big knob that you see on their Duet and Quartet, as well as many competitors’ products. So how do you control it? With the Element Control app. It is quite powerful and flexible and there is even an iOS version so that you can do so from your iPad or iPhone. 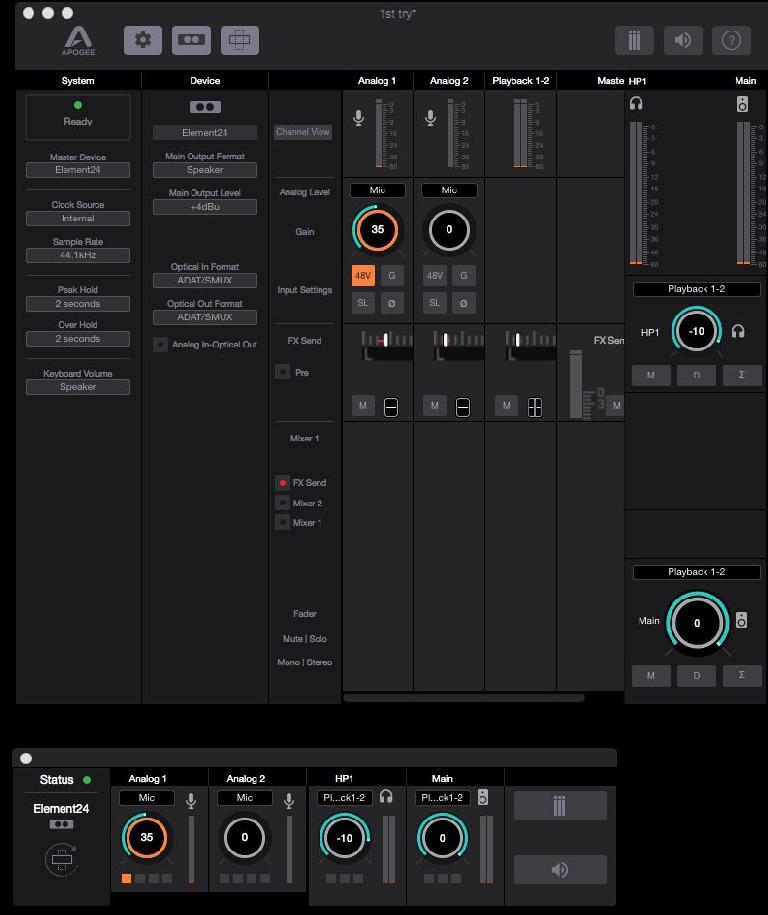 That said, it is perhaps the one area that I am not in love with. It is rather dark and not as easy to read with my tired old eyes as I would like, and the PDF documentation is not as good as it perhaps could be. For instance, I’m pretty sure I’m following it step by step for the FX send capability and not having any success. Could be my bad, but I am usually fairly good at following manual instructions.

There is also an optional hardware called the Apogee Control, that gives you a lot of one button functionality that is nice and that will soon include talkback capability, but at $195, you will have to decide how much you value that. 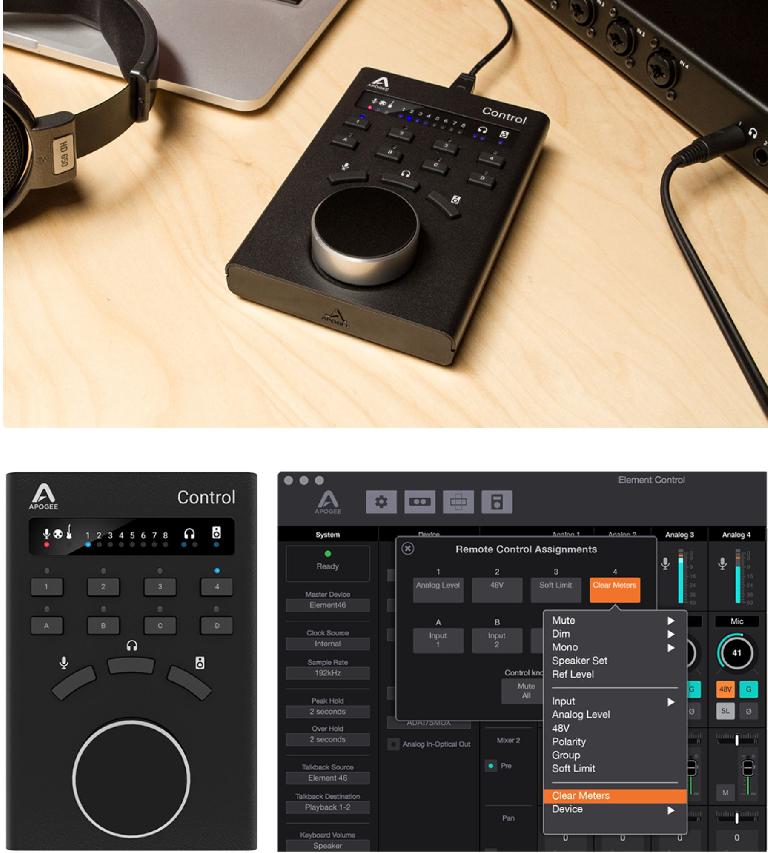 There are a lot of new Thunderbolt audio interface offerings from well-regarded companies, but Apogee has always enjoyed a stellar reputation for sonic quality with its converters and mic pres and low latency drivers, and the Element 24 lives up to their rep in my opinion. The integration with Logic Pro X is terrific. At this price point, I do not see how anyone could go wrong with the Element series as an interface for now and for the future with Mac computers.

Cons: No included Thunderbolt cable, Element Control is a little hard to read and its documentation could stand improvement