Create the Weeknd's Electric Piano in I Feel It Coming ft. Daft Punk in Ableton Live

If you love the sound of this track, G.W Childs is here to show you how to recreate it in your own studio using Ableton Live and some creative vocoding.

If you’ve listened to the Weeknd’s big hit, “I Feel It Coming” that he did with Daft Punk, then you’ll probably be familiar with the deceptively simple arrangement going on: the background synths are so slight that they barely seem like they are there at all. In this tutorial, I’d like to fill you in on a very cool way to recreate this arrangement in Ableton Live.

Step 1. It’s All About The Electric

Sure, that Rhodes riff runs all the way through the song. But, you’d be surprised to know how much of the song relies on that electric piano and the vocoder that’s modulating it. Let me show you what I mean. As I don’t actually have a real electric piano, I’ll use Ableton’s own Electric to give me a great sounding electric piano, using a factory sound, within Ableton. 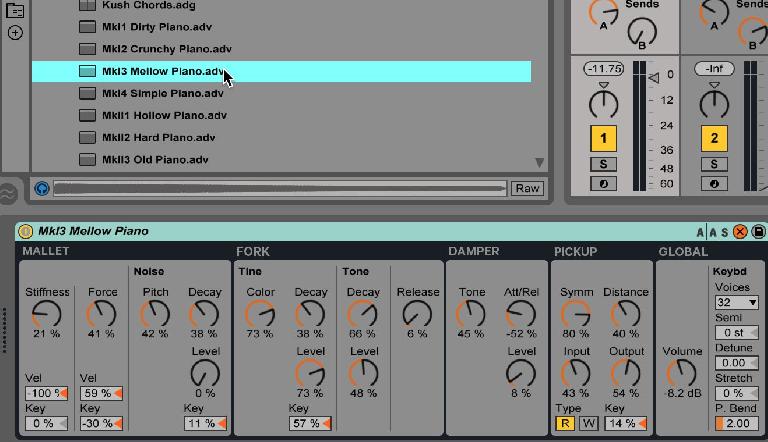 I’ll also take the tempo down to 92 BPM, as we’ll definitely need a smoother, slower groove. We want to feel the love, right?

Now, here’s the only part that does require a little playing. I’ll record an electric piano riff that is close to how it’s played on the original so that we are able to capture the full effect. If playing isn’t really your thing, feel free to copy my work, below.

Alright, we got the main riff out of the way, now it’s time for a little magic.

Now, you’ll note that underneath the piano, hiding gently behind the guitar, there is a plucky little synth line that is the core of the song, but also very elusive in terms of what’s actually being played. Don’t worry, it ain’t that tough! But here’s where the gimmick is. I’ll use an Analog from Ableton’s own optional internal stockpile. Just the default sound is fine, but if you want to tweak it and make it your own, that’s fine too. We just need something quick and plucky. Note the very quick decay time for the Amp Envelope. 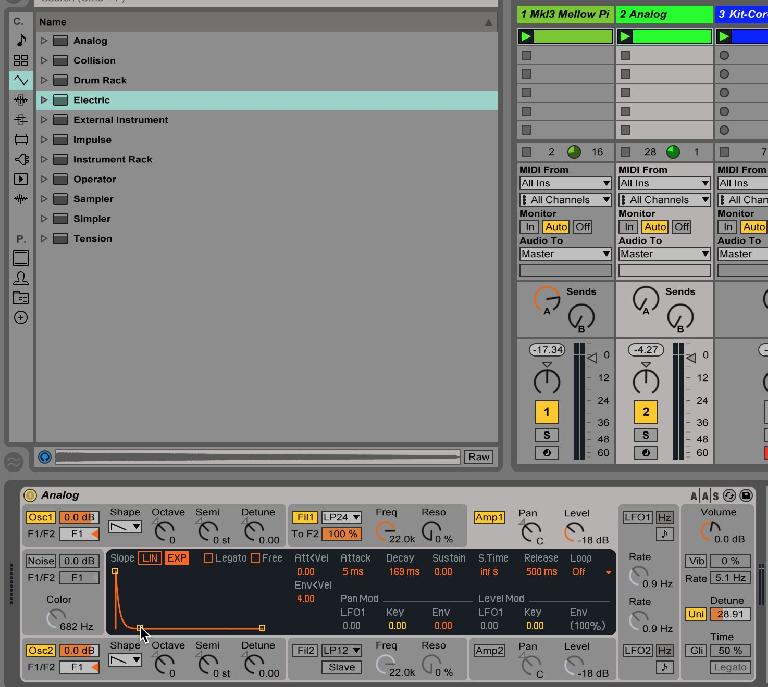 With this basic patch, I’m going to create a very basic sequence that just supplies the basic rhythm, and the basic melody that runs counter in the background to the piano, and is only a bar long. We’re going to use this basic melody to modulate the piano and create that vibe! 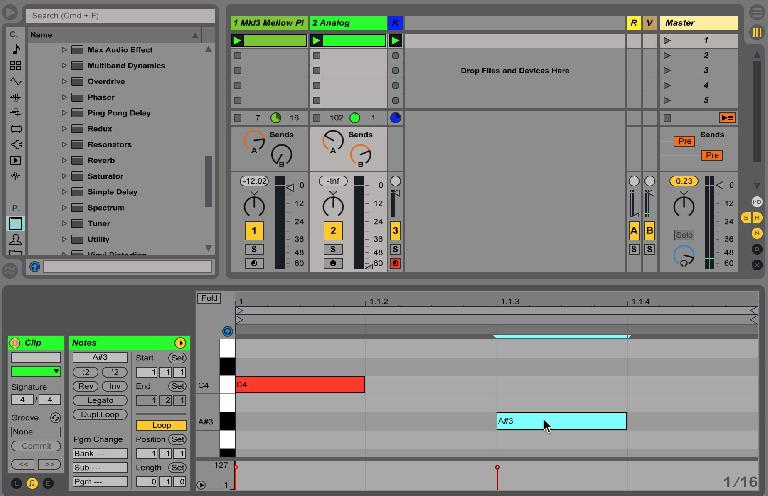 Okay, there are some similarities. But it’s not even going to sound right until we get the signature weapon of the dynamic duo in, known as Daft Punk: the vocoder.

On my B return track, I’m going to drop a Vocoder down, and set its Carrier input to the Output of Return track A: 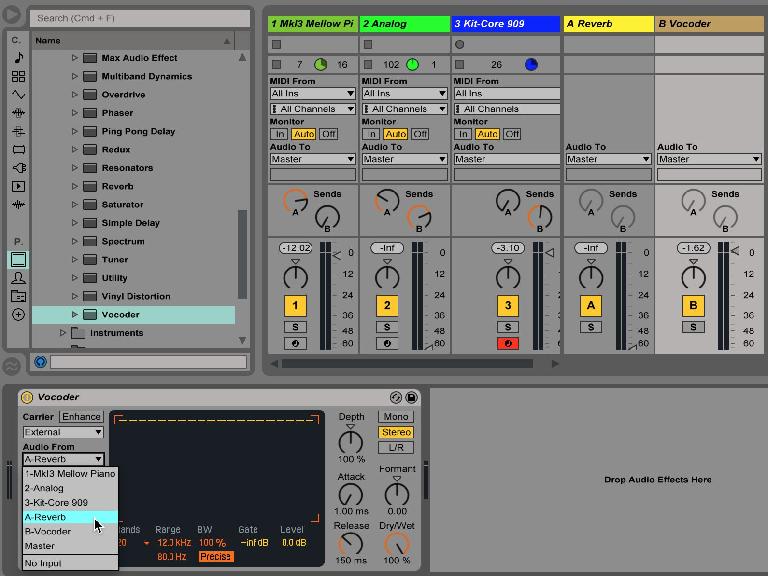 It currently has a fader setting of 0, and is loaded up with the default patch of Ableton’s Reverb that’s going to act as a little bit of a sweetener for a vocoder soup that we’re about to put together. 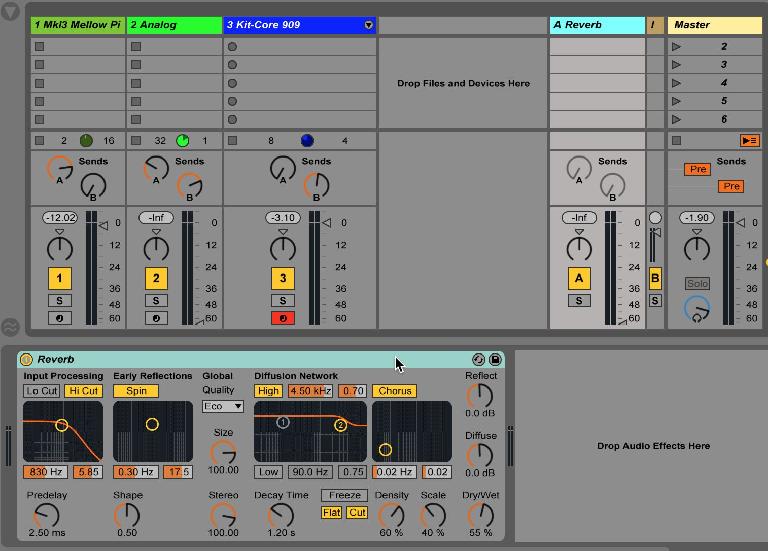 I’m also going to drop Ableton’s Simple Delay on to the Vocoder Return Track B, which will further assist the rhythm that we’re trying to recreate in the background. I’ll set its Left Channel to 3/16th, and the Right to 5/16th, and make sure there is a generous amount of feedback. The background arrangement is simple, so we want an ample amount of feedback to fill things out with our groove.

For the Weeknd beat, I used the Basic 909 from Ableton’s factory library. Recreating the beat isn’t difficult at all. Granted, an acoustic kit could and will definitely create a similar experience. But for quick, on the go recreation, I found the clap of the 909 to be very reminiscent of the original. 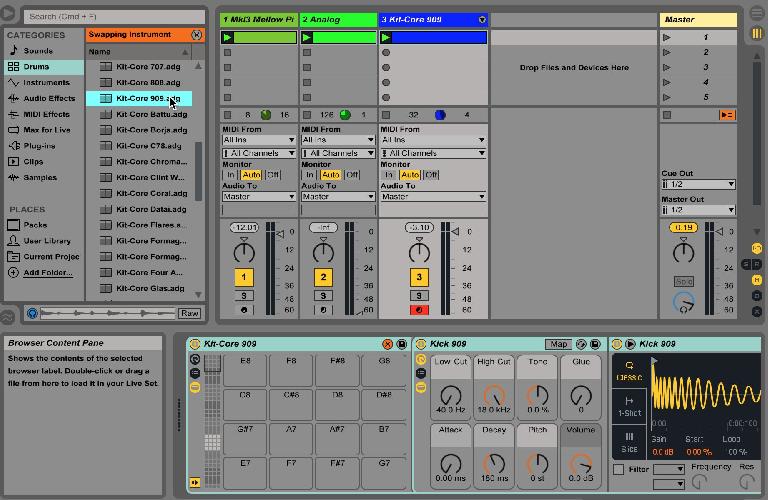 I placed my kicks on the first and third beat within a one Bar pattern, to keep things steady but smooth in the old school way. It’s tempting to drop in the additional notes on the 2nd and 4th beat to start up a dance mix though. Maybe that’s something you can try! 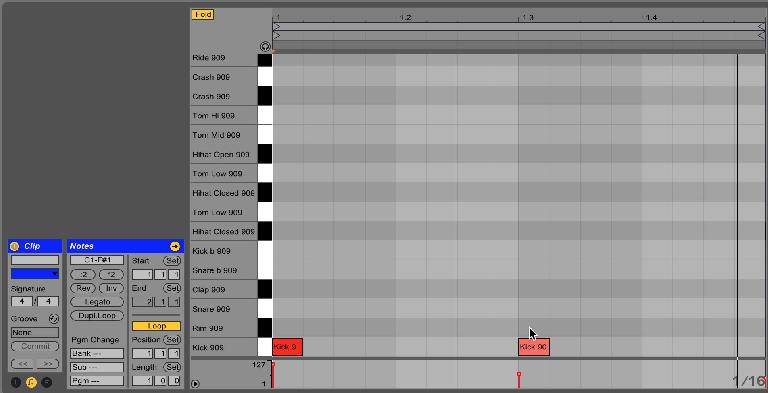 For the snare and clap I’ve placed them on the obvious second and fourth beat. You’ll notice that I’ve lowered the velocity of the clap considerably so that it accentuates the snare, but doesn’t overcome it: a setting I found to be key in getting the feel down of the groove. 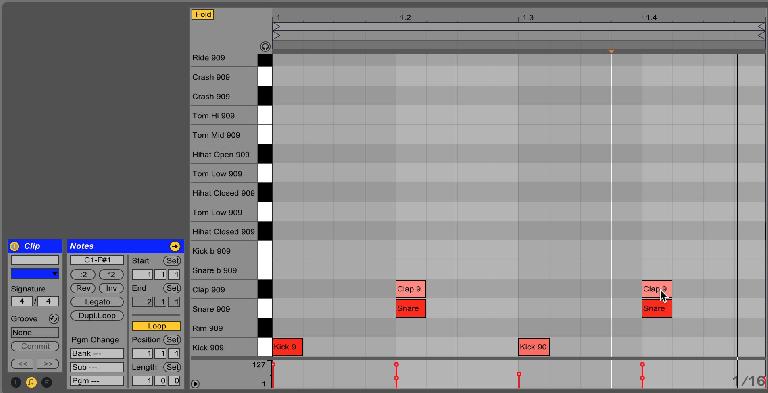 For the hihat, I did a generic 16 beat. You’ll notice that I varied the velocities up a lot within the 16 steps so that there’s an underlying rhythm. By keeping the hats as a whole on a lower velocity as the rest of the drums, we keep the groove relaxed. 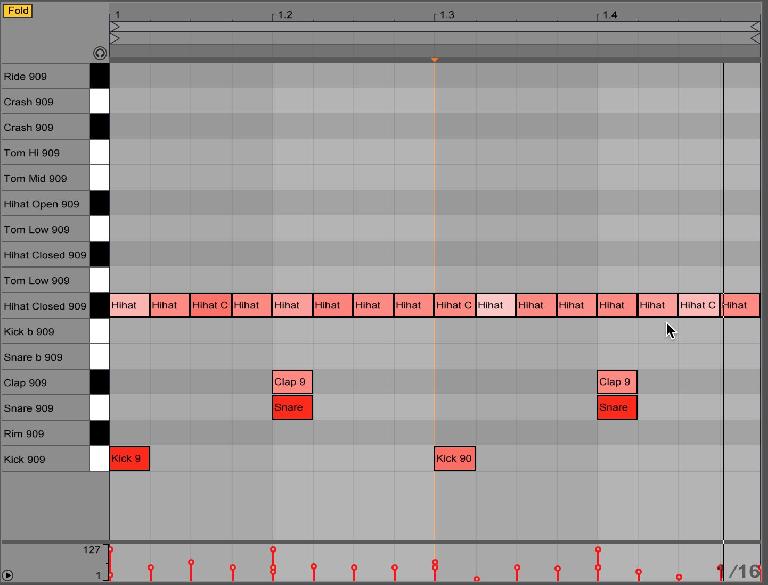 Now in order for this to work we’re going to need to set those auxiliaries up in a way that’s going to mix both melodies within the vocoder, unifying them in to that funky Weeknd sound. Note: The vocoded background vocals of the lead singer go through the same vocoding to some extent, creating cool, ghostly background harmonies within the song from time to time. If you have a mic I highly suggest dropping in some karaoke with your own voice.

I’ll raise the Send coming from the Electric Piano up to -10 dB and raise the Send A from Analog, my plucky synth, to -30 dB. This setting will mix the two melodies and wash them out within the reverb a little. 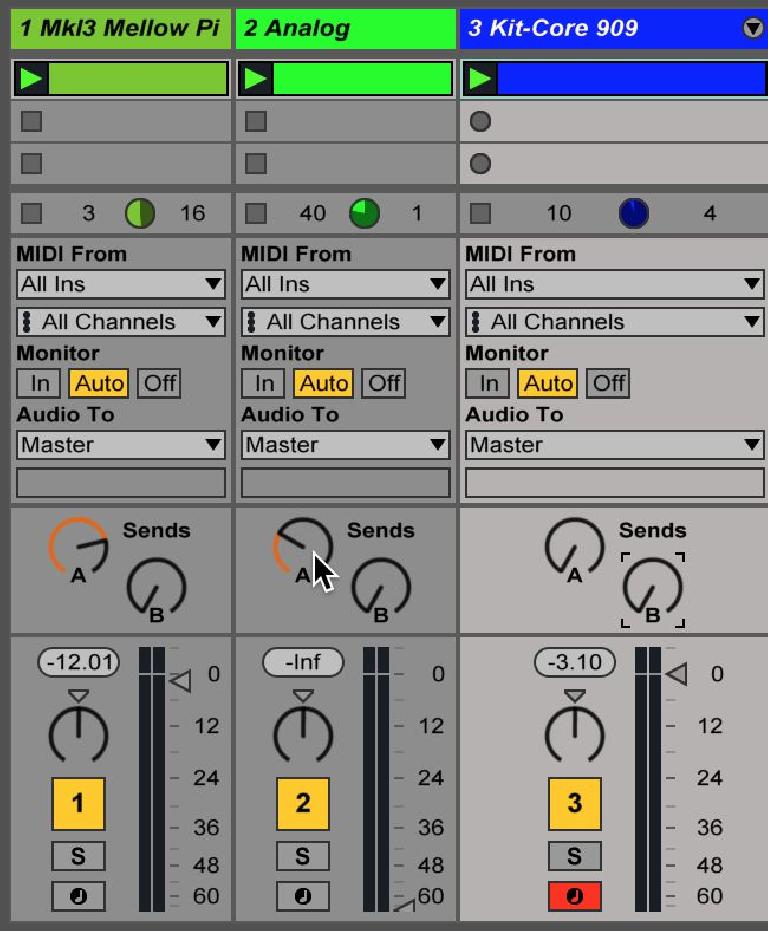 For the Vocoder/Delay B channel, which will wind up being the modulator source for the vocoder, I’ll send -11 dB from Analog and just a little bit from my drum channel, just to give things a little bite and extra texture, with -19 dB. Notice that I’ve also lowered the Analog track. The plucky synth is only going to be something existing within the vocoder routing. This is a part of the trick, and only works if… 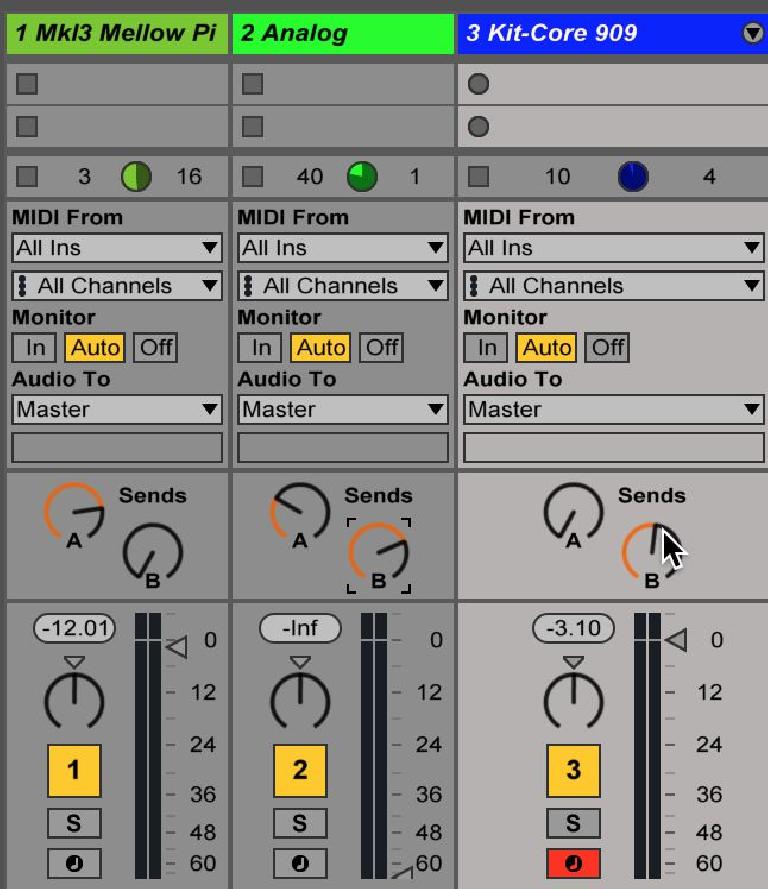 ... you put the A and B auxiliary channels in to Pre, so that the auxes tap the effects before the fader. This allows us to keep the original signal of Analog’s pluck out of the mix as a dry signal and flowing effervescently through the Ableton signal path. 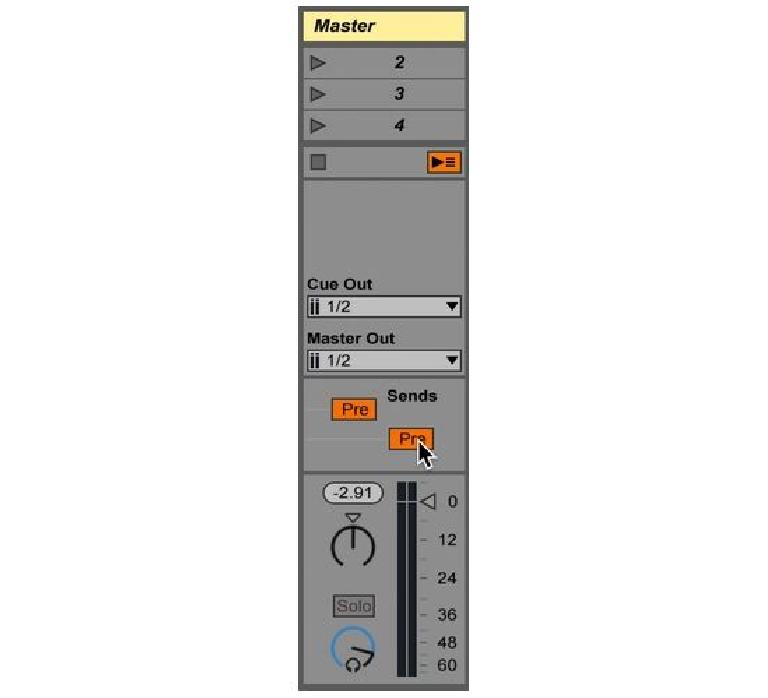 Here’s the part that makes it all finally work. In the Vocoder, while the music is playing, I’ll raise the Vocoder Output to 16 dB. As the sequencer plays along, a ghostly accompaniment washes in, making me feel like I’m on that other planet the video takes place on.

There are a lot of other tweaks that you can do to take the sound even closer to the original masterpiece. But if you just feel like throwing something together for a party or stealing The Weeknd and Daft Punk’s tech and applying it to your own work, feel free! That’s the best way to learn!