Language
It's only been on Matt Vanacoro's wrist a matter of two days, but he's already discovered a potentially promising Apple Watch app ecosystem for musicians. Here's his top 5 Apple Watch Apps out now.

It's here! Whatever side of the fence you might be on with the Apple Watch, you can finally get your hands on one and decide for yourself with a quick trip to the Apple store. There are impressions, reviews, and detailed reports pouring in from everywhere—but we're going to look at what this new piece of wearable technology means for musicians and DJs.

Like everyone else who woke up in the middle of the night to pre-order, I was incredibly excited to see that box arrive from Cupertino on April 24. The first thing I did was open the Apple Watch store on my iPhone and load it up with every music app I could find. Here is a look at the first batch of useful apps for musicians.

The first thing that popped into my mind when Apple Watch was first announced was that I could have a discreet, wearable metronome. When the whole 'haptic feedback' system was unveiled, I was even more excited at the prospect of a silent metronome that 'tapped' my wrist and was otherwise completely hidden from the rest of the world (none of the metronomes I've tried yet utilize haptic feedback—fingers crossed it's coming soon!). As a musical director of many projects, this would be a great way to keep track of tempos for upcoming songs.

Maestro is a visual and audio metronome app. On the iPhone, you can see a complete conducting pattern of the current time signature and tempo. The watch will also give you visual feedback at a device appropriate size. The watch feels more like a 'companion' to the main app in this case, but it works and I found it convenient.

Pro Metronome added quite a bit of control to their watch app. I am a fan of the interface, it makes the most out of the limited space on the watch case and it eschews skeumorphism. You can control the tempo of the iPhone metronome, tap out tempo, and even control the setlist of tempos you have queued up. 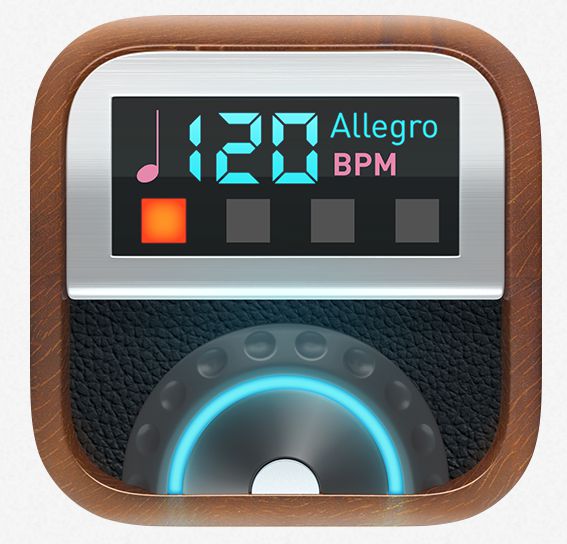 Pro Metronome on Apple Watch has a great interface, but doesn't yet support hacptic feedback.

TapTheBeat is a tempo calculator with a fun retro style. The interface is very OS9 inspired, and it is extremely simple to use. You can tap out a tempo, see the BPM, and you get a detailed calculator of what your chosen tempo breaks down to in standard time. It's great for finding the perfect tempo for your song before you even start recording, or to jot down on your chart to recall later.

More Than a Metronome

DJay 2 from Algoriddim received a hearty upgrade that enables an amazing companion app for the Apple Watch. You can queue up songs right from the watch, and see all of the necessary metadata such as tempo and key for either song in your virtual 'deck'. There is also a crossfader integrated into the watch app that allows you to transition between songs remotely. DJay 2 does a great job of following the Apple Watch paradigm of navigation. It feels at home on the watch and is easy to figure out without much effort. 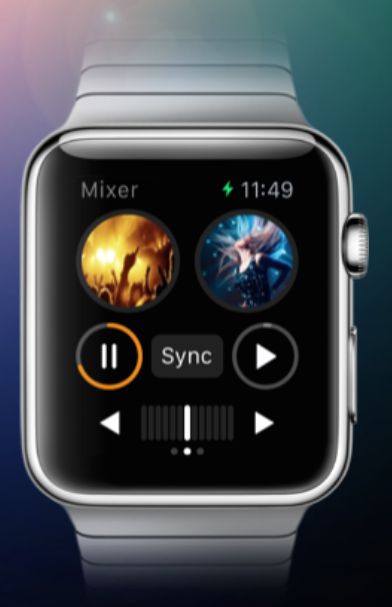 Trust Algoriddm to have a DJay 2 controller app available for Apple Watch on the day of launch!

Setlyst is an organizational tool for anyone in a band who has to 'call out' songs. You can manage songs and sets right from the watch. Any setlist you create on your iPhone can be displayed on your watch in a subtle, yet readable fashion—no more set lists taped to the floor or to the back of the speakers! I'm looking forward to the day where Setlyst lets you rearrange songs in the set, and updates your bandmates with the new song order!

We've only just scratched the surface of what is possible with the launch apps. After all, when the iPhone was first launched there was a loud chorus of “What do I need this for?” and  “You can't do anything serious on that tiny screen!”—sound familiar? Developers took the iPhone and invented an entire ecosystem of apps we didn't know we needed, and now can't live without. I'm sure it will be the same with the Apple Watch. The best app for musicians to use on their wrist is likely only now just being thought of. Let's hope it gets here quickly!

Editor's Note: Shazam reportedly works great on Apple Watch and proves to be a more convenient to find out what song is playing on the watch than by pulling out your phone. However, it uses the iPhone to listen for the song, so make sure your iPhone is positioned appropriately!