Positive Grid has a reputation for making uniquely powerful amp simulations with more features than most. Joe Albano put Bias Amp 2 to the test.

There are many amp sims out there nowadays—some DAWs even include their own—and each one has its own particular take on the art of emulating the sound and response of real amps. Some are more plug and play, providing mostly preset models, while others offer quite a bit of control for customizing the details of the virtual amps. Bias Amp 2, the latest iteration of the comprehensive virtual amp designer from Positive Grid, definitely falls into the latter category. Besides the usual amp front panel controls for dialing up distortion and tone, intrepid users can dig in under the hood and make circuit-level changes to the virtual components that govern a particular amp model’s response and character. There’s also a feature called Amp Match that lets the user capture the tone of a real amp, either from the physical amp itself or from a recording. 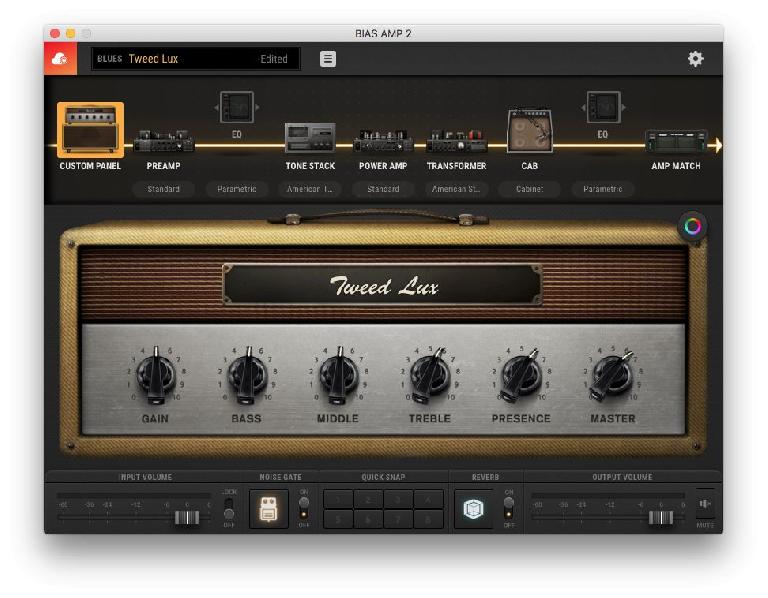 Bias Amp 2 is available both as a standalone application and in all the usual plug-in formats. It comes in three versions: Standard, Professional, and Elite. Professional includes more amps and cabs than Standard—there’s a handy comparison chart on the Positive Grid website—along with the Amp Match and IR Loader features (see below). And Elite adds a set of classic Celestion cabinets.

So let’s take a more detailed look at some of the features that Bias Amp 2 brings to the table.

Bias Amp 2 presents the user with a front panel consisting of several distinct sections. At the very top are menus for selecting amp presets (both factory and user), saving edited/customized versions, and other settings.

Just below that is a signal chain graphic, showing all the editable components of each amp. Selecting one calls it up in the edit panel below and this is where the various customizations and design tweaks are made. The order of the actual components is fixed, as it would be in an real amp, with the exception of two floating utility EQs. At the very bottom are basic input and output level calibration adjustments—as distinct from the Gain and Master level knobs in the amp sims, which affect the tone and distortion—along with a Noise Gate and Reverb (room simulator).

The component chain and editing panel are, naturally, the heart of Bias Amp 2. This is where you’ll find a level of tweakability that distinguishes this amp sim from most others. This detail extends even to the amp graphics. The first component—Custom Panel—is the display of the virtual amp’s control panel, where the player would make tone and distortion settings just as with a real amp. But there’s a graphics panel that lets the user customize the appearance of each amp model, specifying just about every detail from the appearance of the tolex (amp covering) and grille cloth to the knobs and panel itself.

Bias Amp 2 maintains the same full set of knobs for all amps, unlike some amp sims that tailor the layout to the specific amp being emulated. For users who might want to emulate their favorite tone down to their preferred settings on the real thing, this might require a little extra work, but once those settings are found, they can be saved with the amp as a user preset.

The next four components make up the heart of the models: Preamp, Tone Stack, Power Amp and Transformer. Each one calls up a view of the relevant componentry including glowing tubes that glow brighter as the Gain is advanced and other internal elements. This is where the virtual amp circuitry of an individual model can be tweaked extensively for a more specific response and tonal character. Now, admittedly this might exceed the needs of many players, who require nothing more than a few turns on the main Gain and Tone knobs when searching for “their sound”, but guitarists who gravitate to Bias Amp 2 will be the ones for whom tone is more of an obsession, and they’ll welcome the level of fine-tuning available here with open arms.

In the Preamp module, two sets of preamp tubes can be chosen from a list that includes the usual 12AX7 and its brethren; the number of preamp stages can be dialed up, anything from 1 to 5—think Mesa Boogie cascading gain stages—and the tube bias can be adjusted. These tweaks can provide subtle or less-subtle changes in the amp’s response. The Tone Stack can be selected from a large number of options, all modeled on the tone circuitry from a variety of classic and modern amps, as well as bass and acoustic amps.

The power amp design is a key component of the sound of a real amp, and the Power Amp section in Bias Amp 2 once again provides a wide range of customization options. Of course, there are the usual 6V6, 6L6, EL34 and EL84, but Bias Amp 2 adds additional tube models, the 6550 and KT88, which provide the drive for many classic amps. The options for circuit topology include single-ended Class A, as found in some classic smaller practice amps, as well as variations of the more typical push-pull Class A/B approach, with tubes operating in pairs; there’s even a choice for solid-state operation, a la the Roland JC-120. Once again, tube bias can be set, and the behavior of the Presence control customized, along with a number of additional small adjustments that can have a subtle effect on the simulated distortion breakup.

The Transformer module actually has two sections. The user can select from transformer types found in American and British amps, which will have a subtle effect on tone. There’s also a power supply section, with an option for two different tube rectifiers, the GZ34 and the older 5Y3GT. As many guitarists know, tube rectification can cause a voltage “sag”, which has the result of compressing the signal when the amp is pushed hard—this compression can have a significant effect on “feel”, affecting the playing style. The user can even dial up a preferred compression character for this simulated sag, with a full range of controls.

To wrap up the amp controls, two standard parametric EQs provide further options of overall tone-shaping; then this gives way to the output options.

An improved speaker emulation section in Bias Amp 2 includes options for both modeled speaker cabinets and IRs—recorded Impulse Responses. A recent partnership with Celestion provides a wide range of Celestion speaker IRs for Bias Amp 2 (included in the Elite version), and the user can also load their own IRs as well. 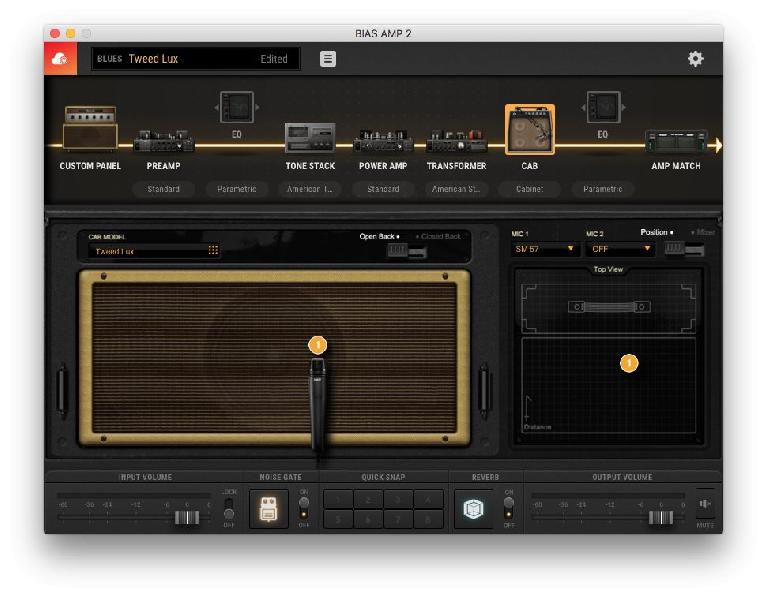 The speaker cabinet and miking options

Modeled choices include 1, 2, and 4-speaker cabs, covering all the bases including a user option for open or closed back. And naturally there are microphone options—the selected cabinet can have two mics, with position and distance set via a grid, and there are level controls for achieving the optimal balance. Emulated mics include a 57, 421, 414, and Royer 121 ribbon.

This special feature of Bias Amp 2 allows the user to capture the sound of their favorite amp, or even try to capture a favorite guitar sound from a recording. You simply select the Amp Match module, route the desired amp signal into it, and the audio will be analyzed; I tried it with a prerecorded guitar guitar track from a session. First, the first 20 seconds of the recording—guitar being played through the desired amp—was analyzed. Then I played guitar live into it—I assume this is to account for the guitar tone when dialing up the appropriate settings. Finally, I saved the result. The match to the original amp tone was pretty good—with a few minor tweaks of mic position and Gain, I got it close enough to the original tone to do an acceptable punch-in.

The Amp Match feature in use

Bias Amp 2 In Use

As far as the amp sims go, I played through a wide range of the factory presets, and tweaked and saved a few customized presets. The original amps are not specifically named—as with most amp sims—but it’s pretty obvious what they all are, and the models of the ones I was most familiar with definitely captured the tone and vibe of the originals. Digging in and making some adjustments to some of the virtual circuitry had subtle but noticeable effects—I particularly liked being able to experiment with different tube types and customize the virtual amp’s simulated “sag” by tweaking the Rectifier settings.

So with all this extra tweakability, what’s missing in Bias Amp 2? Well, there are minor things like no bright switch or input jumping simulation on the front panels, but those kinds of tweaks can be made in the circuit sections. I could also mention the odd omission of any Spring Reverb simulation in the Reverb section, which includes rooms, chambers, halls and plates, but not the one type of reverb that is actually included with many of the amps modeled here. But this last omission is kind of in line with what seems to be the overall philosophy of Bias Amp 2, which is that it’s a dedicated amp designer, and not a complete guitar signal chain.

Other than the Reverb and the utilitarian Gate, there are no effects at all—no pedal, stompbox, or rack effects included, just amps. Positive Grid does offer options for those who may want to include modeled fx in their sound, but it’s a separate product called, appropriately, Bias FX, which emulates all manner of stompbox fx, from choruses to fuzzboxes, all modeled as meticulously as the amps in Bias Amp 2, with similar circuit-level tweakability. Bias FX also includes preset amp models (front-panels only), but lacks the extra circuit tweakability of Bias Amp 2. So FX is more of a player’s tool, while Amp is a tweaker’s toy. There is a level of integration between Bias FX and Bias Amp 2—you can load Bias FX’s amps into Bias Amp 2 for customization, and then bring them back into FX to play, using them in a full amp->fx chain there. Still, it would be nice if Bias Amp 2 did include some effects, even if—like the amps in Bias FX—they were just preset (front-panel controls only) models.

Bias Amp 2 has some integration with Bias FX

Bias Amp 2 is clearly targeted for those users who are very much control freaks when it comes to their guitar tone, and it definitely delivers in spades. But even for those who are more players than designers, the amp sims on tap here are top-notch, and the extra capabilities may come in handy, especially when working sessions with guest guitarists who have specific needs.

Cons: No effects included (requires separate product); no manual (though there are extensive help files and video tutorials to be found on the website)

Learn more about guitar processing in the Ask.Audio Academy: https://ask.audio/academy?nleloc=category/audio/topic/guitarproduction