A DAW with a twist, MixBus 4 recreates the sonic personality of the Harrison hardware consoles. But how accurate is the sound? Matthew Loel T. Hepworth takes 'The Bus' around the block.

In the era of the analog studio, purchasing recording equipment was done á la carte. For example, if you wanted a Studer deck and a Harrison 32C console, you could go and purchase that exact combo (provided you had deep pockets.) But the modern DAW paradigm has combined the recorder and mixer into one branded product. While all current DAWs have a lot to offer, Harrison's MixBus 4 may have you re-embrace the concept of buying gear based on the sound characteristics rather than whiz-bang alone.

A Legacy of Tone

Truth be known, I've never mixed on a Harrison console. (I'll bet the majority of you haven't, either.) But I've sure listened to a lot of artists (Electric Light Orchestra, Genesis, Michael Jackson, Kansas, etc) whose award-winning mixes have flowed through Harrisons, which have earned a reputation for sound quality and flexibility. The company has made the bold statement that you can get the Harrison sound in Mixbus for a mere $79.00. Can they be serious? Did they hit their collective head? Let's find out.

Mixbus 4 is a fully featured DAW (including MIDI tracks) that runs on  Mac OS X 10.6.8 or newer, Windows XP or newer, and Linux kernel 2.6 or newer. (That's right: Linux.)  I tested Mixbus on my 12-core Mac Pro running Sierra, but the idea of switching to a Linux-based system is intriguing, especially given the uncertainty of Apple's roadmap for pro machines. Both 32- and 64-bit OS and CPU architectures are supported, which means you can use Mixbus on older computers with at least two or more CPU cores. You'll get unlimited audio, MIDI and instrument tracks, and up to eight buses for signal routing and effect returns. While there are audio, instrument and MIDI plug-ins included, you can also use 3rd party offerings in VST, UA, and LV2 formats, as well as the XT-series of Harrison plug-ins you can purchase individually, in bundles, or in a $9.00-per-month Plugged-In Membership.

Mixbus is divided into two main windows: Mixer and Editor. A big monitor (or multiples thereof, one for each) will undoubtedly help you get the most from either window. My primary monitor is an ultrawide 21:9 and that allows me to see a large number of channels and tracks. If you've ever used a DAW, both of these windows will feel familiar. Mixbus opens with the Mixer window by default, giving you a nudge to play with those controls first. Everything about the Mixer will remind you of a hardware desk, right down to the color scheme and the 'knob-per-function' layout that mimics the consoles upon which many of us cut our teeth. 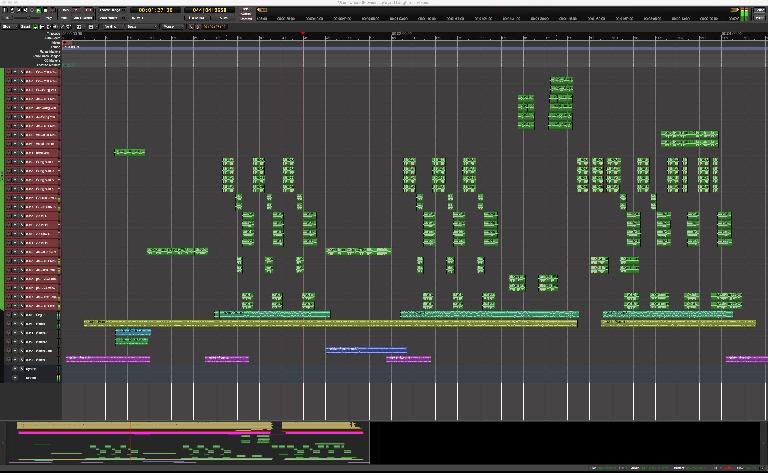 There are two ways to get tracks into Mixbus: recording or importing. Many users record in their current DAW first because their existing recording workflow is familiar. In that case, importing the audio (19 supported formats) and MIDI tracks is easy, though you may want to render all the virtual instruments to audio tracks to keep you from working to recreate all those plug-ins and settings after the import. Recording into Mixbus is simple, and new adopters will get the hang of that quickly. Version 4 also has the capability (currently included in beta form) of importing PTX and PTF sessions from Pro Tools.

How the Sound is Achieved

Most popular DAWs don't have a 'sound,' per se. In other words, there's no sonic difference when you listen to tracks imported from one DAW into another, provided all faders and other controls are at their default, zero, or off positions. But that's not the case with Mixbus because the analog spirit of the Mixer is always working. After I imported my first session and pressed play, I instantly heard some pleasant sonic differences. The low end was obviously thicker, and the soundstage seemed less cluttered in the mid and high frequencies.

Every audio channel has classic Harrison 3-band sweepable EQ controls, as well as a dynamic processor with Leveler, Compressor, and Limiter modes with corresponding gain reduction meters. All those controls are ever-present; there's no need to hunt for and install plug-ins and control panels. Bus routing is above fader, and inserts and signal flow routing are above the EQ.

Each bus has the same dynamics and a 3-band EQ with set rather than sweepable frequencies, but also have a tape saturation effect with Drive control and analog-style distortion meter. The Spill button instantly populates the mixer with the channels currently routed to the corresponding bus. The Master fader has the same controls as the buses, but also comes with a limiter, K-14 loudness meter, and a stereo correlation meter.

Since all of the Mixer controls are visible at all times, crafting a mix feels extremely fast. In fact, many of the tracks I imported required very little EQ. Some things just sounded closer to finished before I even started treating them. The Spill button makes it easy to grab all the associated channels quickly, but you can also assign several channels to Groups to instantly reveal the channels within while hiding unassociated channels. VCA faders also provide mixing for multiple channels simultaneously. The Redirect panel lets you configure your desired signal flow through the EQ, compressor, plug-ins, and post-fader processing (make sure to install the a-Inline Scope plug-in post-fader) and the Switcher lets you customize phase, monitoring, hardware routing, and channel comments.

The only thing I struggled with was the width of the channels, which limits the quantity that is visible on the screen at any given time. However, you can switch any fader (or selected multiples thereof) to a skinnier view, the caveat being that some controls markings (like the EQ knobs) will disappear. That's the only drawback (if you can call it that) to the 'knob-per-function' paradigm, and it illustrates the benefit of having high-resolution monitors.

When your mix is complete, there are two export options: Export to Audio File(s) and Stems Export. Both can export to a variety of different formats including WAV and FLAC, and you can create multiple exports. In other words, if you want exported files in 32-bit WAV, 16-bit WAV, and 24-bit FLAC, they can all be exported in one operation rather than requiring three individual export processes.

Mixbus is an extremely deep and capable DAW. Don't let its low price and the short length of this review fool you. There is much, much more to this program (like powerful editing, virtual instruments, video capabilities, etc.) than I have space to include here. But as I see it, Mixbus will appeal to three primary and overlapping demographics: first-time DAW customers, seasoned pros with a penchant for analog tone, and folks like me who are thinking about switching to or adding Linux to their OS options. It's been a long time since I got excited about a new DAW, but I'm excited — very excited — about Mixbus. It's fast, efficient, and sounds wonderfully musical. Every time I use it I find something else I like. Obviously, its virtual nature prevents it from coming with Harrison mic preamps, but any DAW or studio will benefit from an investment in high-quality preamps, which you may already have in your audio interface or external device.

To sum up (pun intended), I can't recommend Mixbus highly enough. I strongly suggest you try it yourself by visiting www.harrisonconsoles.com and downloading the fully-functional demo. You may also want to try its larger sibling, Mixbus 32C if you have a bigger budget. Either way, Mixbus will instantly give your sessions the flavor of a world-class analog mixer with powerful DAW editing all in one package that won't break the smallest bank.

Pros: Analog sound and approach to mixing. Extremely fast workflow. Most controls are at your fingertips (mousetips, if you will.) Saying it's affordable is an understatement. Uses a transportable encryption key file as copy protection; no hardware dongle required.

Cons: You'll want a high-resolution monitor. Importing tracks from a different DAW required unless you start recording in Mixbus.

Learn more about mixing and mastering in the Ask.Audio Academy here.

oldAMIGA
I understand your affinity for linux, but stay on Cubase, please. You are the best therefore...
MattLTH
Thanks, oldAMIGA. Not to worry, as interesting as Mixbus is, my heart is with Cubase. That said, Mixbus is very cool!