EastWest's Hollywood Series has been phenomenally successful and for years now has been my personal 'go to.' The choirs are the latest entry in the series.

Hollywood Choirs is a sample library available in all the popular formats that uses EW’s proprietary engine, Play. In fact it requires a new Play 6 version that is free with the purchase and for Composer Cloud subscribers. Others will pay $29.99. It has two sets of instruments, Women and Men. Unlike the Symphonic Choirs, there is no real way to totally separate sopranos from altos and tenors from basses. (While they gave me some good reasons for that decision, it means that for those who write true SATB music, this may not be their choice.)

It comes with vowels, consonants and a Wordbuilder that has pre-made phrases in Latin, English, and “Votox” that you can use, modify, or create your own. Unlike the Symphonic Choirs, it also includes some “true legato” (recorded legato intervals) with various vowels, like ahs ands ohs. (Strangely enough, no oos which is the vowel I use most.)

There is a Gold edition with the main mics and a Diamond edition, that has five microphone mixes: main, close, stage, mid, and surround. Surround is available as an add on for the Composer Cloud Gold X edition as well. Diamond is 59 GB and 24 bit while Gold is 8 GB and 16 bit.

In Play 6, the Main window looks pretty much the same at first glance, as does the Mixer, but the Browser is another story and to my mind, greatly improved. 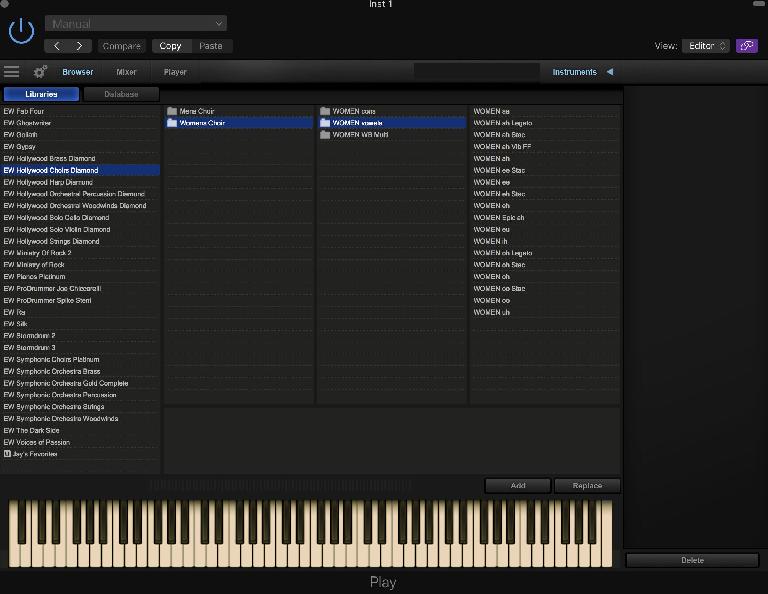 Much cleaner, in my view. Another nice feature is that after you load an instrument a little box pops up that allows you to make some quick adjustments to the MIDI channel assignment, output assignment, and level.

But even better, there is now a searchable Database for all your EW libraries. 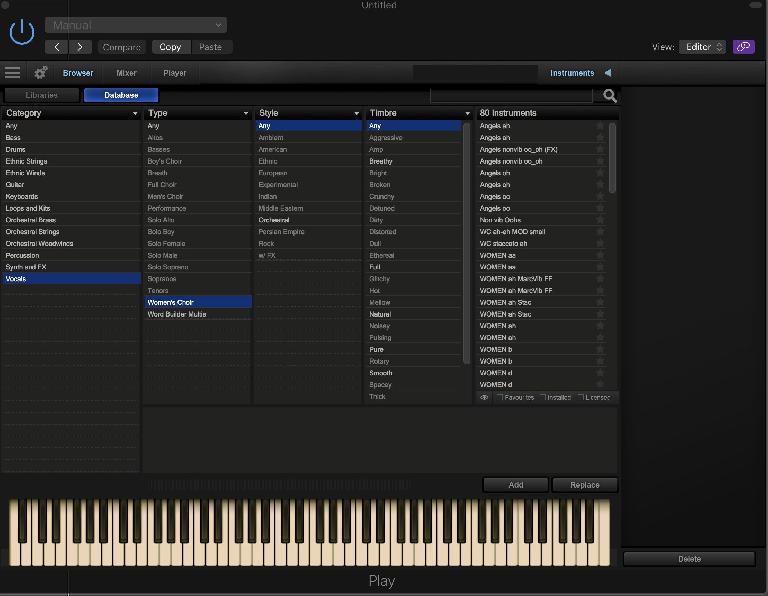 After you load some instruments, you see that the Hollywood Choirs Player window is quite nice, although a little dark for my taste. I love that you now see all the instruments and their properties on the right side if you want without having to open the mixer, and that you see where all the mics are on the stage. That is very convenient. 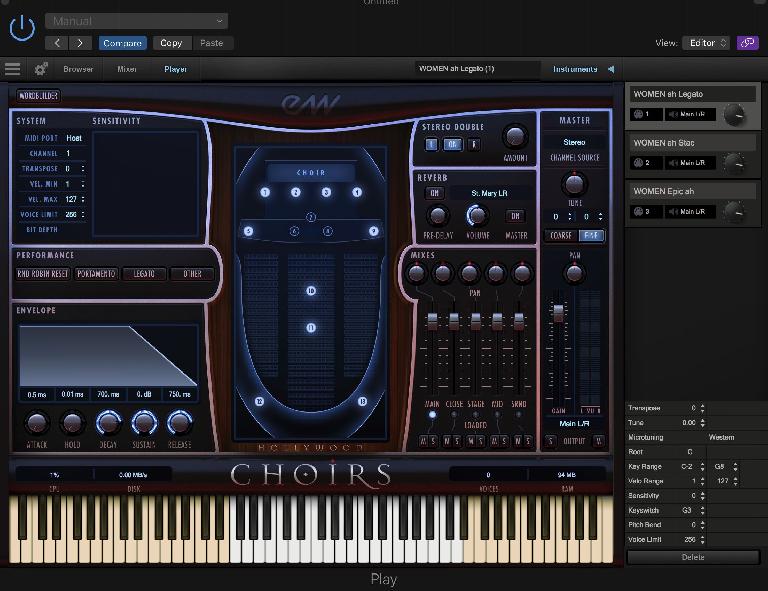 The instruments feel very playable to me, and apparently the legato patches are polyphonic legato, as I can play single lines and in and out into chords. Dynamic layers modulated via a modwheel crossfade and switching between them is controlled by cc1.  You can attenuate volume with cc11 and cc7 as well. The mod wheel also adds vibrato as the dynamics increase. There is not a way to separately control the vibrato, which is something I may miss.

EW says, “Wordbuilder allows the composer to type in any word or phrase and have it sung by the choir.” That is perhaps making it sound a little bit more simple than it actually is in my opinion, but it definitely seems easier in Hollywood Choirs than the earlier Symphonic Choirs and they have added some phonetics that make it sound better. Although less intuitive than the English or Latin, you do indeed get the best results with Votox with some work once you understand it, especially diphthongs. Sometimes results are easily improvable by just lengthening or shortening syllables in the Time Editor.

To restart a phrase you still have to reset it by pressing the reset button in the Tools area on the GUI or assign it to a MIDI cc or press F5. 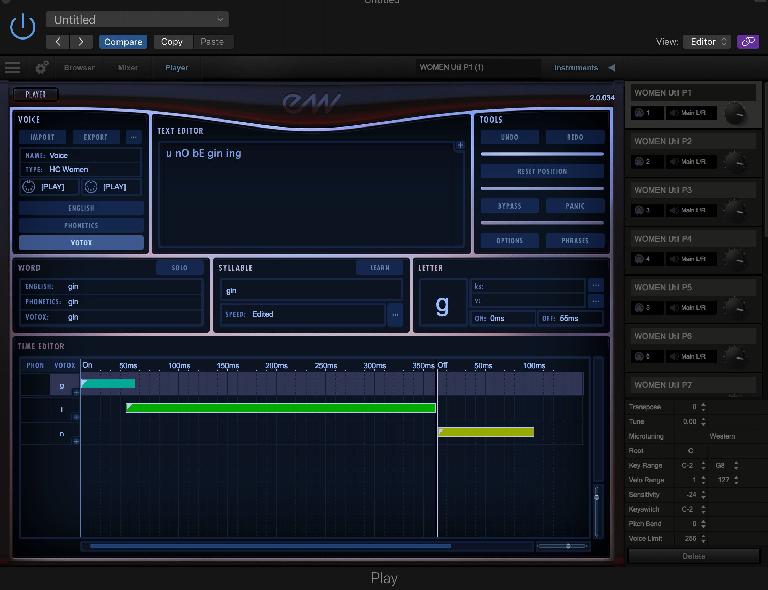 The sound. Doug Rogers and Nick Phoenix have been recording samples for a very long time now and so it is no surprise that Hollywood Choirs is beautifully recorded. It sounds crystal clear and pristine, but not cold and clinical and it is rather dry when you turn off the built in reverb, which allows the user more control, if less instant gratification. With the reverb on though, you get the instant gratification. Changing from the main mics in Diamond to Close with some Surround took it a whole other place that I think I am going to dig. But if you buy Gold, there is nothing disappointing about the Main mics by any means.

As with the other members of the Hollywood Series, to really use this library to get the results I like, I need to load a bunch of instruments assigned to different MIDI channels and Play 6 still does not allow you to assign keyswitches to each and there are no “all in one” instruments.” I work with this in Logic Pro X with the SkiSwitcher articulation switcher and so I am really used to working that way. But there is a certain appeal to some of the newer libraries that pretty much do 80% of what you want just by how you play it and I do think that is probably the way of the future. On the other hand, it would make little sense for Hollywood Choirs to behave dramatically differently from the rest of the series and few of them sound as good as the EW Hollywood series.

If you already own the Hollywood Series, you want this because it will blend well, sounds great, and it has the powerful Wordbuilder.

Price: $599 US for the Diamond version, $499 for the Gold version or subscription to one of the Composer Cloud packages.

Pros: Beautifully recorded, very playable and the Browser and Wordbuilder are considerably improved. Play 6 is still free for purchasers of the library and Composer Cloud subscribers.

Cons: No true SATB or control over vibrato separate from dynamics. No legato oos. Requires knowing the instruments really well and using multiple ones to get the best results.

Learn more about composition and scoring with the pro video courses in the Ask.Audio Academy here.