In the minds of some, a DJ is only as good as their last set '" but what good is that if nobody can hear it? Enter Reloop Tape2, the retro-styled, portable recorder ideal for the modern world.

With the advent of SoundCloud, Mixcloud, and even streaming platforms like Spotify now supporting DJ mixes, documenting performances to share online is more important than ever. While there are plenty of portable recorders on the market, many common features are overkill for the average club DJ who likely has little need for 192kHz sample rates or stereophonic field recording mics.

Enter Reloop with their highly-portable Tape 2 solution: a portable recorder designed specifically for DJs. Cleverly resembling a retro cassette, Tape 2 records strictly via 1/8” (3.5mm) jack input to a MicroSD card in either 24-bit WAV or 320 kbps MP3 format. The input can be set to dynamic Mic or Line level input, though presumably most DJs will leave it on the line setting to record directly from a DJ mixer. 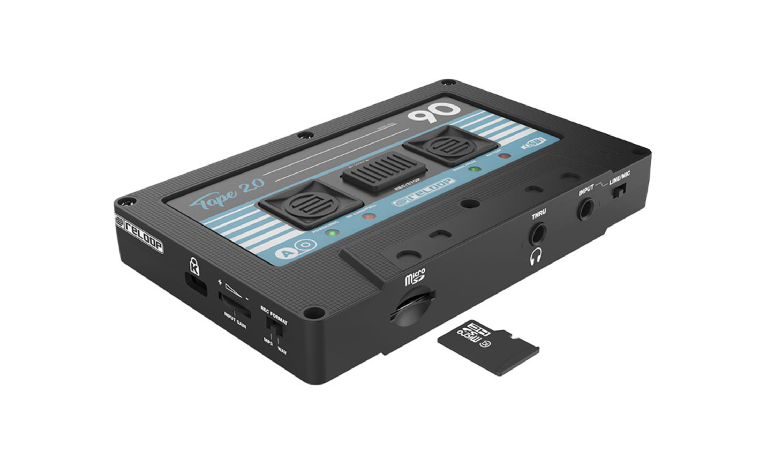 Tape 2’s A/D converter is impressively well-tuned, with resulting recordings in either format coming through crystal clear with plenty of dynamic range. Monitoring input signal, however, poses a bit of an issue. A single multi-color Signal/Peak LED indicates input levels: yellow means you’re coming in hot, while green means you should be in the clear.

While this seems simple enough, even with the input attenuator all the way down, the signal light still shows green, implying some signal, however quiet, is still coming through to the recording – but on one early occasion when I did this in the club for safety purposes, despite a continuous green light, the recording turned out completely silent.

A product designed for use in nightclub DJ booths ought to be foolproof, as most usage will be in dark, loud, hectic environments – often with some amount of inebriation. Given this, I think it would be considerably more intuitive if the signal indicator went dark with the input slider all the way down to clearly show there’s nothing being recorded.

I imagine this LED response can be addressed easily enough with a future firmware update, but another challenge with the solitary input signal LED is the lack of visual indication whether a stereo signal is being recorded. With the ubiquity of dodgy cabling, this would be the second most important thing to check beside input levels. While the output jack allows for verification in headphones, seeing the stereo balance at a glance is one benefit of the more detailed visual monitoring included with most other portable recorders.

The other three LEDs helpfully indicate Power and Recording status, SD Card capacity, and Battery level, while a single button toggles recording. It’s great to avoid any menu diving, with the recording format determined by a simple switch. Furthermore, the output jack can be used as a Thru, allowing Tape 2 to be integrated directly in-line with your home system without sacrificing any routing you might otherwise rely on.

Tape 2’s portability is a major selling point, as it easily fits in the front pocket of a normal pair of pants. And by using a lithium-ion battery that can be recharged via USB, one of the most bothersome elements of portable recording technology – replacing the batteries – is eliminated entirely. A Kensington lock slot allows you to secure Tape 2 in place at less reputable venues, a handy Lock mode prevents mid-recording mishaps, and a Transfer mode allows you to use it directly as a card reader when connected to your computer via USB. 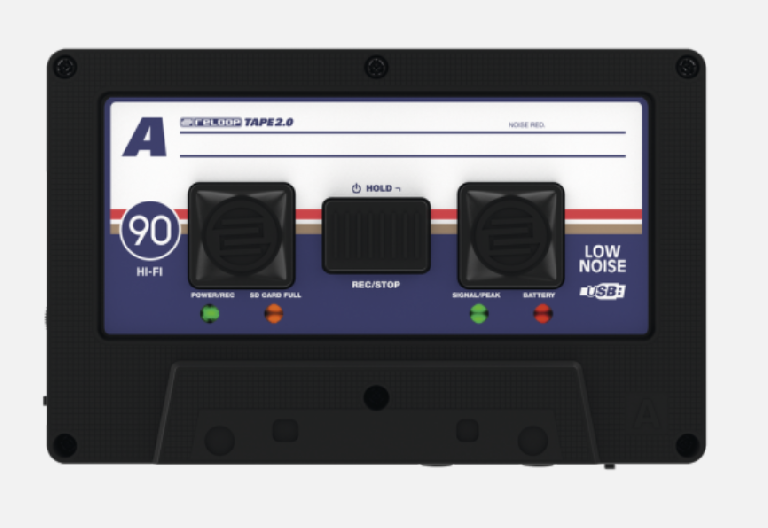 Between the affordability of MicroSD cards, a highly-portable and customizable design, and excellent sound quality, Tape 2 seems to have cornered a niche but growing market. Easily surmountable monitoring quibbles aside, Reloop have come up with a clever solution at a competitive price point for DJs looking for an easy way to capture their magic at home or in the club.

Cons: Visual monitoring could be improved.