Logic Pro X: How to get the Classic Vocoder (singing synth) Effect

Language
The vocoder can be heard on many hit records by artists like ELO, Kraftwerk and Daft Punk. In this comprehensive tutorial, Joe Albano, shows how to create your own vocoder effects in Logic Pro X.

The Vocoder has been around for a long time—originally developed in the 1930s (!), and used for voice synthesis and even encryption (in WWII), it was adapted for musical use (by Bob Moog, among others) in the ’60s and ’70s, where its range of effects was heard on recordings by artists like Kraftwerk, Wendy Carlos (the Clockwork Orange score), ELO (“Mr Blue Sky”), Styx (“Mr Roboto”), and even Doctor Who (at least one version of the theme music). More recently, Vocoder effects have been incorporated into music by various artists, ranging from Coldplay to Daft Punk.

Vocoders are capable of quite a number of effects, from harsh, metallic Robot Voices (Cylons), to a quantized pitch effect similar to the Auto-Tune effect. But the classic Vocoder synthetic voice effect is the “singing instrument” or “singing synthesizer”. This is where a vocal is superimposed on an instrument, so it sounds like the instrument is singing—some classic examples of this particular effect are ELO’s “Mr. Blue Sky” (middle and end), and The Cars’ “Dangerous Type” (at the very end).

The effect requires two signals—the instrument or synthesizer, which provides the tone and music—chords and/or melody—and the vocal, which articulates the words. The vocal doesn’t have to be sung (though it can be)—even a spoken word recording is fine—the pitches come from the instrument or synth. Here’s an example: 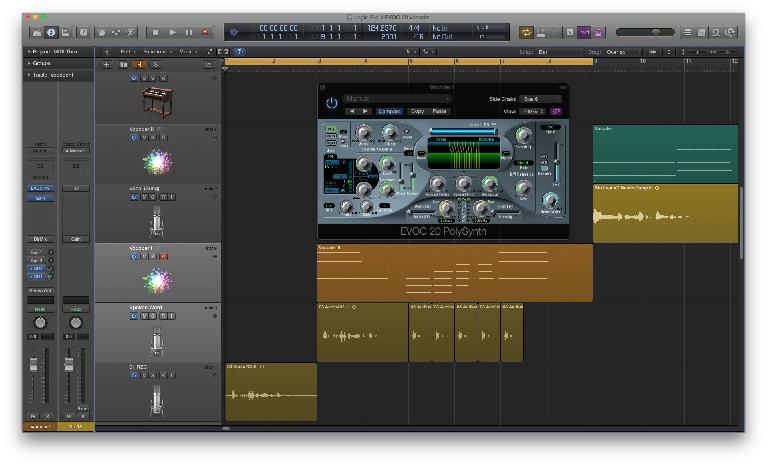 Logic has been good enough to include a Vocoder in its collection of effect plug-ins—the EVOC 20 (the E comes from the old days (Emagic) and the 20 is the maximum number of frequency bands—see below). In fact, Logic has not one, but three versions of this effect—two audio processors and an Instrument, which incorporates its own synthesizer.

These are fairly deep, complex processors, so I’m not going to explain them in full detail (that would be more of a book then an article!). For this article, I’m just going to show how to get that one classic “singing synth” effect, so I’ll cover a little of the basic theory and only the most key settings.

Of the three versions of the EVOC 20, two can be used for the classic effect we’ll be looking at here—the EVOC 20 PolySynth (the Instrument) and the EVOC 20 TrackOscillator (audio processor). Both can take a vocal and superimpose it on music—the PolySynth version uses its own synthesizer to provide the music (chords/melody), while the TrackOscillator version lets you apply Vocoding to an existing Instrument track (I used an organ in my example). 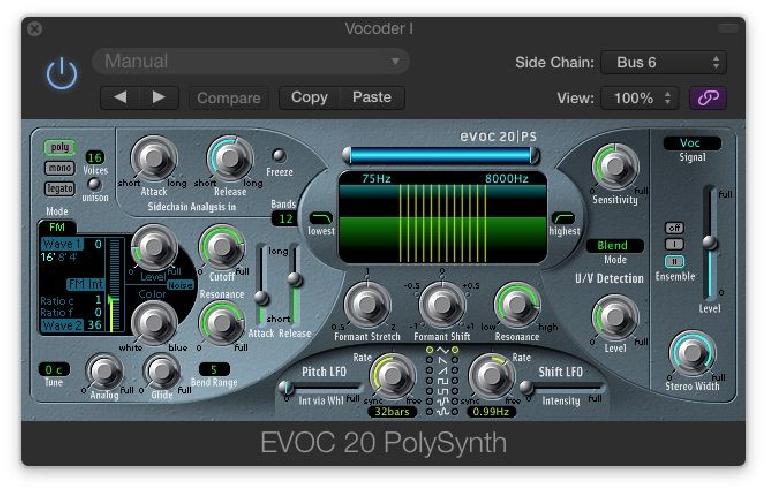 The term Vocoder is short for VOice EnCODER. It encodes the characteristics of the voice using a bank of narrow-band filters—the EVOC lets you choose anywhere from 5 to 20. Looking at the EVOC 20 front panel (Fig 2) , you’ll see these in the center—more filters means a cleaner effect, fewer, a more pronounced artificial quality (somewhere in the middle (8–10–12) is a good choice). There are actually two filter banks—the Analysis and Synthesis banks.

The Vocoder works by breaking up an analysis signal (the voice, in these examples, but it could be anything) into narrow frequency bands; the included Synthesizer is broken up into the same, corresponding bands. Each of the analysis bands is coupled to its own Envelope Follower, which controls the envelope of the corresponding Synthesizer band. This superimposes the shape of the analysis wave—the vocal—onto whatever the synthesizer is playing (chords, melody).

So why does this make it sound like the Synthesizer is singing? Well, a human voice produces a number of resonant peaks called Formants—several of these combine to create the different vowel sounds. As we speak or sing, we’re changing the formants, each of which occupies a narrow frequency band, as we change vowels—that’s how we form words. The Vocoder captures the changing envelopes of these Formants with its narrow Frequency bands, and the Envelope Followers apply those envelopes to the synth sound, making the synth, in effect, produce vowels, as if it were speaking the words of the vocal signal. Since the synth is holding notes and chords, it appears to be singing those words—and there it is, the “singing synth”.

The consonants in the vocal (analysis) signal are detected and passed through, or used to generate a separate noise signal—this lends greater clarity and articulation to the “singing synth”. All of these aspects can be tweaked with the various controls in the EVOC, giving you the option to push the effect either toward clarity or away, towards a more synthetic or edgy quality.

Welcome to the EVOC PolySynth

Here’s how to get the classic effect with the EVOC 20 PolySynth. You’d insert one on an Instrument track, and you’ll need a second track, with a vocal recording (spoken or sung) to provide the words/syllables. The vocal track will be routed to the EVOC’s Sidechain input, using the standard Logic plug-in sidechain menu, in the upper right (Fig 3 A). 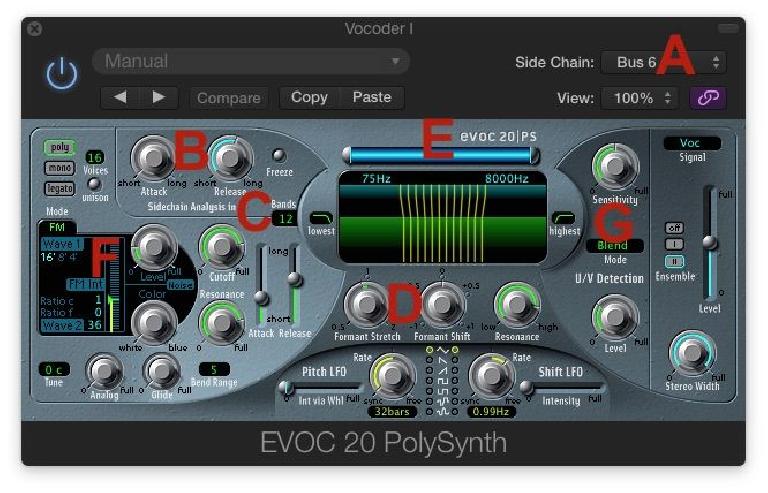 There’s an Attack and Release control that determines the response to this signal—for the most intelligible vocal effect, set the fastest Attack that sounds clean (Fig 3 B). Just below right, choose the number of bands (Fig 3 C)—as I mentioned, more bands = cleaner, fewer bands = more pronounced effect (Audio Example 2).

Below the graph are the Formant Stretch and Formant Shift controls (Fig 3 D). These will alter the corresponding Synth Formants only, providing familiar tonal-shifting special effects (Audio Example 3). The Resonance control, to the right, can also be used to intensify the effect.

Above the graph, you can set the overall bandwidth (Fig 3 E)—narrower bandwidths will also have a more pronounced synth-y effect (Audio Example 4).

To the left are the Synth controls (Fig 3 F), where you can dial up anything from an analog to an FM-type synth sound. These are your standard synth controls, so I won’t go over them here.

To the right, there’s a section labelled U/V Detection (Fig 3 G). U/V stands for “un-voiced”. These are the un-pitched portions of speech—the consonants. EVOC can detect these, and it will either pass them through, or generate a noise sound for them (or a blend of both), before passing the voiced components (the vowels/Formants) over to the analysis filter bank. The Sensitivity knob determines the response to the un-voiced components—too low, and the effect will lack clarity and intelligibility. The default setting (40%) is a good starting point (Audio Example 5).

Audio Example 5 The vocoded signal, first with the U/V Detection Sensitivity and Level settings at zero; then at their defaults (40% and 30%, respectively):

The Output section adds a Chorus option, and the Stereo Width knob can create either a mono effect (all the way down), or a stereo effect, by panning the different bands between left and right—centered, the bands ascend from left to right, at maximum, they alternate left and right (this control’s been at maximum for all the audio examples).

Besides generating the classic Vocoder effect with the EVOC 20 PolySynth’s built-in synthesizer, you can also apply it to another Instrument. To do this, you’d turn to the EVOC 20 TrackOscillator audio plug-in instead. Simply insert it in any slot in the Instrument track of your choice—I’ve picked an organ track. 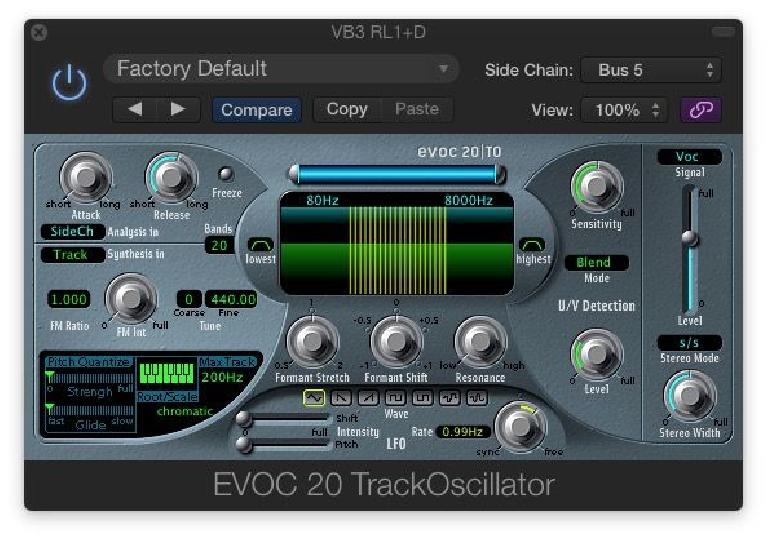 As you can see (Fig 4), the key controls are mostly the same. If you wanted to preserve more of the Instrument’s natural sound, you could set a wider bandwidth, and more neutral Formant settings.

Obviously, there are a lot more controls in these plug-ins, and a lot more effects on tap as well, but this is all we have room for now. If you’ve got Logic, and you’ve never bothered to play around much with the EVOC 20, there’s a wealth of cool effects waiting in there for you to discover!

Learn more about how to use the vocoder in Logic Pro X with this excellent video course by David Earl HERE.

Zaffa
I have been trying to get this singing vocoder effect using acid pro 9 and cannot. Any help would be great.
Joe A
Hi Zaffa -

As a Mac user I don't have access to Acid Pro 9, so I can't offer a specific answer, but if there's no Vocoder plug-in included you might want to check out a free Vocoder VSTâ€”here's a couple of links:

I'll start a thread based on your question on the MPV Forumâ€”maybe another Acid user will have a suggestion.. :-)