The market seems saturated with a variety of hardware synths. As I always say, it's a great time to be making music! Though the question now we have is, how to integrate all these hardware synthesizers into our existing production setup, so we can actually make music with these devices?

Generally you would consider using a DAW as a central hub for all the synthesizers and sequence in that. Alternatively you would plug all your synths to a hardware sequencer and work with that. Personally I’ve never been that fond of hardware sequencers because there were always compromises to be made when using such devices. A DAW on the computer always trumps hardware sequencers in terms of flexibility and features. But that does not have to be completely true.

Let me introduce you to Pyramid from Squarp Instruments. The company is relatively new to the scene but they have created a killer product and we really need to be talking more about it. Pyramid is a hardware sequencer unlike any that I have ever used or seen in the current market. By the end of this review you will realize why I say this. 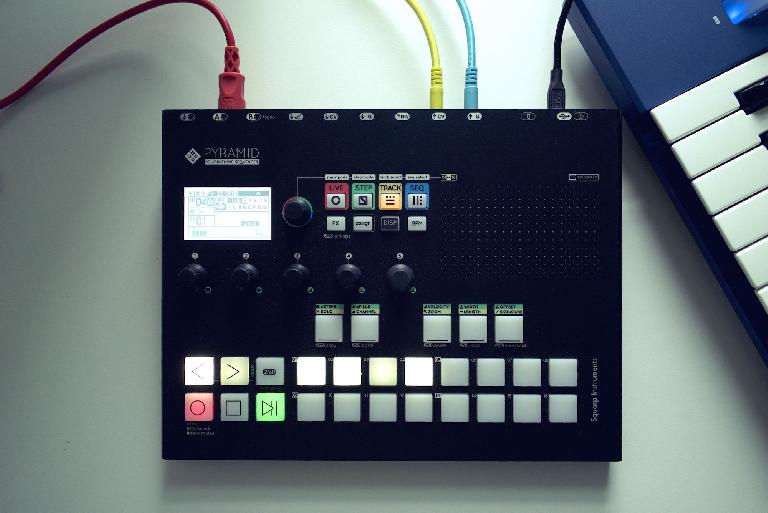 It can be a bit intimidating trying to wrap your head around all the features of this device. I myself got a bit frustrated when I started playing with the device, it just has too many features for a dedicated hardware sequencer. But once you figure things out, it's a really fun experience and you won’t miss your usual DAW. The color coding on the device helps understand how everything works. The sequencer also comes with a nifty overlay that explains what each encoder and pad does in the different modes. There are 4 main Modes, LIVE, STEP, TRACK & SEQ. Each mode is color coded to help you distinguish between the functions of the 4 modes. Let's look at what each mode provides.

Once you figure things out, it's a really fun experience and you won’t miss your DAW.

Here you can access controls for the 64-track polyphonic sequencer where each track is completely independent from the other. That includes the time signature as well! Think of setting up a loop in your DAW of choice and having each track loop at a different length (It might not even be possible in some DAWs). So you can create polyrhythms or even poly-meter progressions where each sequence has a different time signature. Each track has its own MIDI out assignment so it's easy to integrate multiple devices. The parts can be easily copied and pasted to different tracks. Each track can be as small as a quarter note in length or almost unlimited bars long. I managed to go up to 300 bars and got tired twisting the dial after that. Definitely more than the usual hardware sequencer limit. 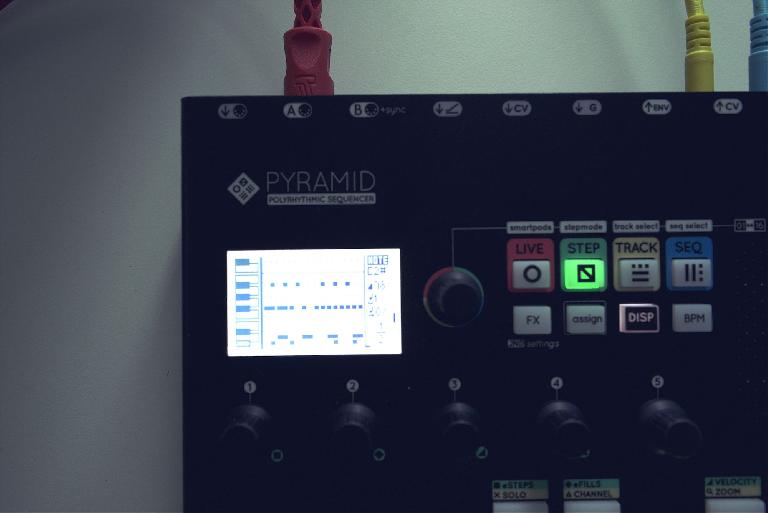 You can store up to 32 sequences(groups of tracks) here and you can perform with these sequences on the fly. Mute/Unmute individual tracks in a sequence and even chain sequences to create longer progressions. The full sequences can be saved on the included SD Card. It's almost like a full-fledged DAW without the audio features. The sequences are saved in a Standard MIDI File (SMF) format so it's quite easy to import the MIDI into a DAW for further editing.

Each track can be sequenced in the STEP mode which is more like a full-fledged Piano Roll. The STEP mode has different sub-modes which can be switched by holding down the STEP button and turning the main data encoder. There is the NOTE mode for adding in monophonic or polyphonic parts manually. Then there is the CHORD mode for entering in a variety of preprogrammed chords. There’s the EUCLID mode which enables a Euclidian sequencer mode for generating interesting repeating patterns on a single note. There’s the EFFECTS section which has 11 different real-time MIDI effects which I will talk about in a separate section. Finally, there’s the CC automation section which allows you to enter in any of the 120 available CC messages to modulate parameters on the synths connected. Within this same menu you can also access PITCH BEND, Channel PRESSURE, & PROG CHANGE messages. It's a bit misleading to categorize these last 3 types of MIDI data under CC messages but convenient to have it all under the same menu for easy access.

You also get a LIVE mode which can be used to record MIDI data in real time. The upper section of the key pad is laid out like the piano keys, so you can use that to play melodies, bass parts or even closed voicing chords. The bottom 8 pads in this mode will trigger 8 preset chords all part of a diatonic scale which can be set to any of the 24 major or minor keys. 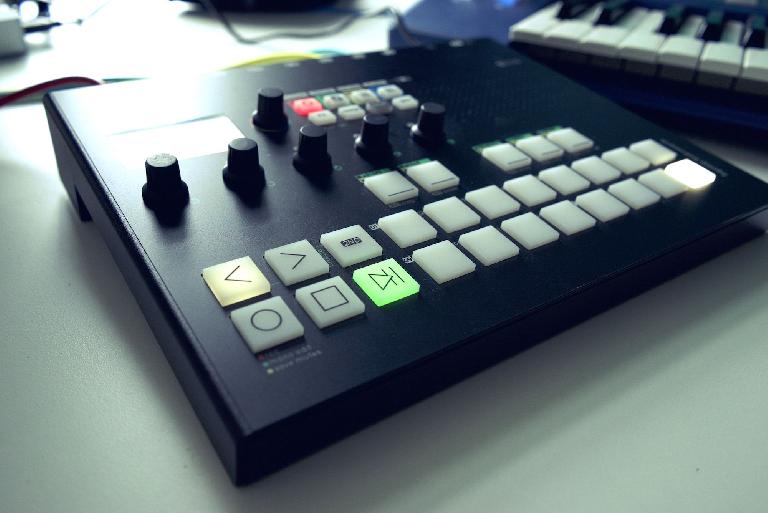 Could Pyramid be the heart of your synth setup?

There are 11 MIDI effects that can be added to any track. Each track can have up to 4 MIDI effects. Effects range from quantization, arpeggiation to harmony generators and even randomizers! I really like that quantization is a MIDI effect rather than a destructive process, so you can always go back to your original performance by removing the effect.

It does everything most conventional sequencers do, and some more.

There is a freely assignable Touch Pad to record in automation data for any of the 120 CC messages.

Pyramid has 2 MIDI 5-pin din outputs to control your MIDI enabled hardware synths. The second MIDI port also sends DIN Sync output. It has CV, GATE & Envelope outputs on 1/8th inch plugs to control analog gear. It can be set to the volt/oct standard that works with Eurorack gear or hertz/volt to work with synths like the Korg MS-20. It also has a USB plug for integrating with a DAW or controlling software synths. What’s great is that all the 16 channels on the MIDI port are addressable, so with the 3 total MIDI output ports you can potentially work with 48 separate sounds. Time to bring out those old Multi-timbral sound modules out of the closet. 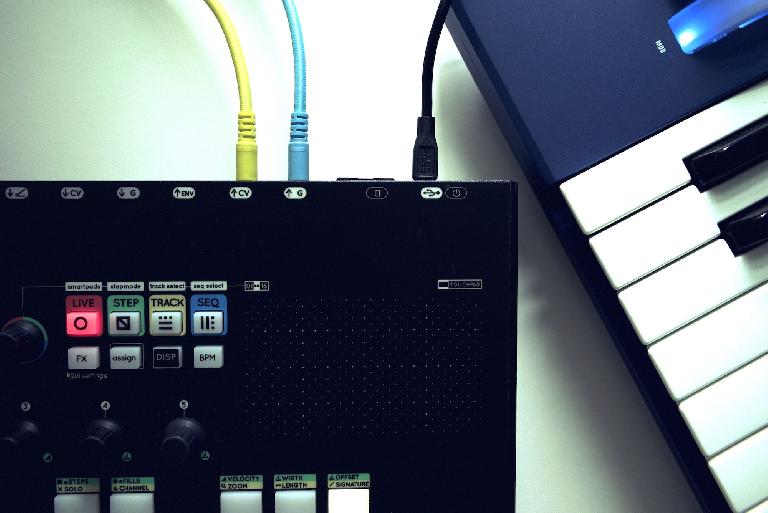 You also get 5 rotary encoders that are pre-assigned to specific tasks depending on which mode you are in. It can also be freely assigned to control any of the 120 CCs and even parameters of the MIDI effects.

"Pyramid is almost like a replacement for your laptop."

A lot of live performers and Modular Synth tweakers are not fond of using computers for their real-time shenanigans. The Pyramid would be great for scenarios like that as you don’t need to use a computer to create, program or perform on it. It runs completely standalone. With a keyboard controller connected to the MIDI IN on the Pyramid, you could even record live MIDI data into any of the tracks in a sequence, which in turn could be controlling another hardware sound module. In fact, via the USB connectivity one could even control software on a computer. It's almost like a replacement for your laptop, except for the audio side of things.

The Pyramid is a new device so you can expect the developers to be updating the OS, fixing bugs and adding new features. As of this writing there is already a new OS in the works with some excellent new features. In STEP mode the 5 rotary encoders will be used to quickly edit the MIDI data, like transpose, change velocity, length offset, etc. There will be a new CC LFO effect which can be used to modulate any of the CC data as well as Pitchbend, Channel Pressure & Program Change. Aside from this there are a whole bunch of minor improvements and bug fixes in the next OS. 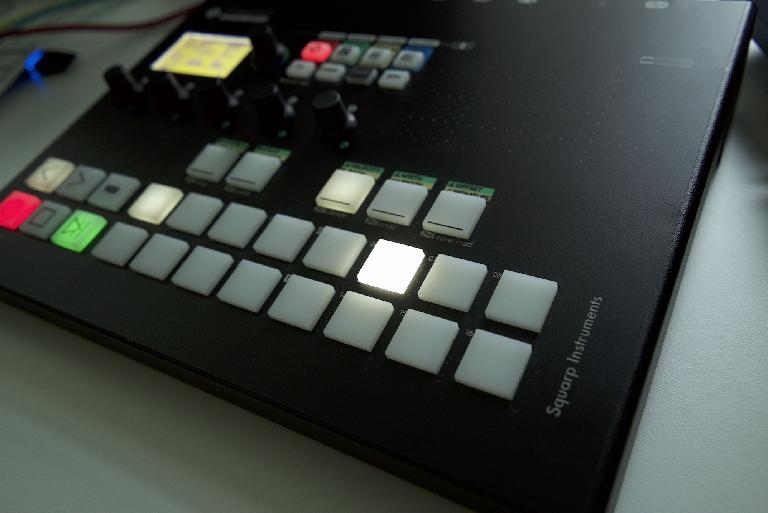 Squarp Instruments have hit home with the Pyramid.

Squarp Instruments have really hit home with the Pyramid. It does everything most conventional sequencers do, and some more. The form factor is great, reminds me of Elektron hardware, only lighter. The only negative aspect of this device is that you will be paying a lot more than for what it would cost to get one of those conventional sequencers. The closest competitions to this device would be the Arturia BeatStep Pro which does focus a lot more on analog CV and costs a lot less, and the Social Entropy Engine. For the price, Squarp could have included maybe an extra CV & Gate out, but if you are mainly working with MIDI instruments and maybe fewer analog synth that uses CV, the Pyramid would be a great choice.

Cons: Expensive. Only 1 CV/GATE out.