Language
With the release of the red and blue electribe 2 and electribe 2 Sampler Korg have updated the software to 2.0 bringing a number of useful features to these machines. G.W Childs shows his favorites.

The electribe 2 and electribe 2 Sampler are back for a reprise! Korg has re-released the lighted, powerhouse of a tabletop workstation. And, if you’ve been keeping your ear to the ground, you probably heard that these new electribes are shipping with a new OS, with some cool features. In this review, I’d like to take you through some of the new features in V 2.0, of the new electribe 2 software. And, fill you in on some color!

Watch a video overview of some of G.W Childs' favorite features here:

Before we get too far into this, let me explain. The new 2.0 software is free for everyone that owns an electribe 2 and electribe 2 Sampler. You don’t need to run out and buy a new one! And, if you haven’t downloaded the 2.0 update, yet, let me tell you why you should. 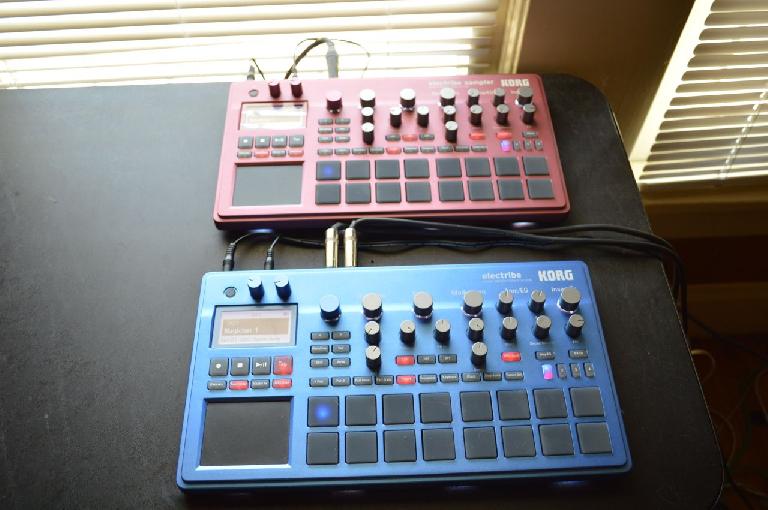 Korg has listened to their customer base, firstly, and addressed a highly requested feature in the form of one level undos. This may not seem like a big deal at first, but when you’re performing live, and you want to keep variety going through your set, it’s really great to be able to drop a sick modulation pattern onto a synth part, only to undo it. Then, turn around and add another. Or, play some killer bass line, undo it, and then drop another line over it, without having to hold the trigger button, while in Erase pattern mode, or trundle through the menus to delete a part. 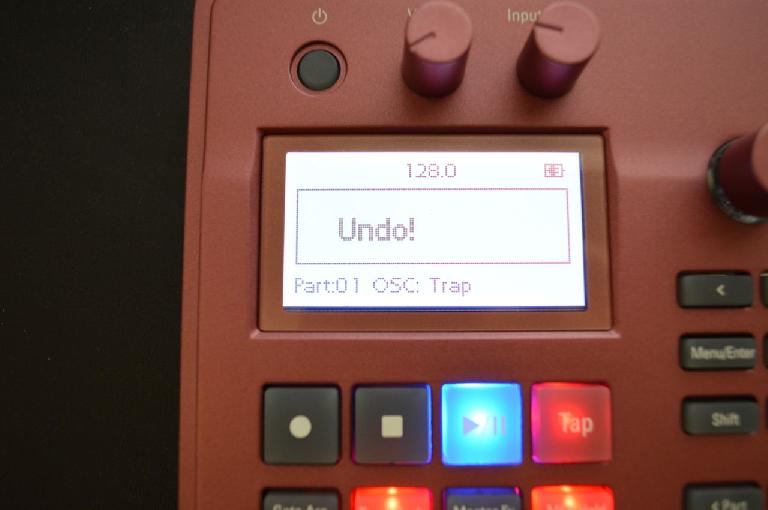 I only hope that maybe, as they move on to newer versions of the electribe 2 software that they might take an additional nod from the volca clan and add Redo, as well as Undo. Currently, when you hold down Shift and press the <, or page button, to engage the Undo feature a second time, you just get a not so helpful message saying ‘Can’t Undo’. It would be awesome if a second Shift + < (Undo) would actually just restore the last step. This feature is really helpful on the volca line, as it allows a performer to keep bringing a part back, and gives you an extra A/B toggle between sequences.

In addition to one level Undo, electribe 2 and electribe 2 Sampler were both updated with a new pattern chaining feature that is really, really helpful. The function needs to be turned on in your Global Options, first. But, once it’s is active, you’ll be able to successfully utilize the new ‘Chain To’ function in the Pattern options, as well as Chain Repeat. 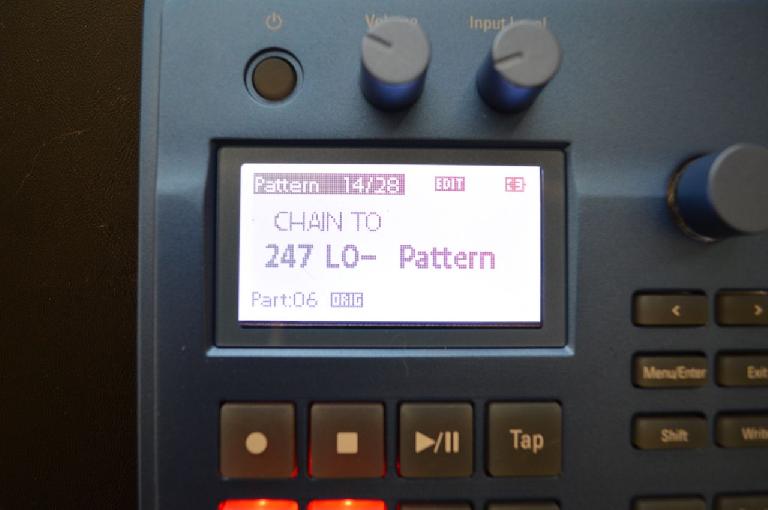 Pattern chaining makes the Electribe's even more fun to play with.

The two new options give you an amazing amount of power, as you can not only chain multiple patterns together, but you can also specify with Chain Repeat how many times you’d like a pattern to play, before it moves to the next chained pattern. For example: You can now chain one pattern, to another, then set the repeat value for twice. Then, on the pattern that you chained to can be chained the pattern previous, so that you get a never ending loop between two patterns. 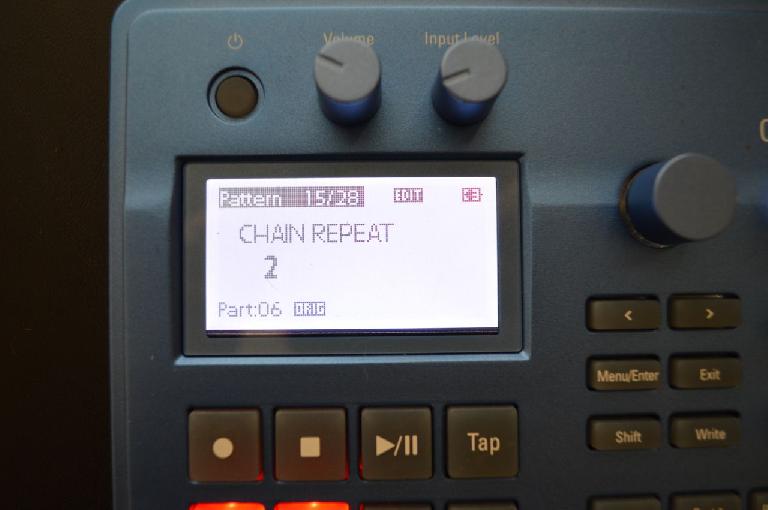 I only have a slight complaint about the execution of the feature. If you want to chain a particular pattern, you have to scroll through the menu, access Pattern Menu page 14, scroll through up to 200 patterns to find the pattern you’d like to Chain to. Then, if you’d like to have the chained pattern repeat more than once, you go to the next page. There’s not really a quick way to do this on the fly. Though, I will happily report that the function, once executed does not interfere with playback. So, at least you can keep jamming. Hopefully, some future updates, will incorporate a shortcut way of chaining through a button combination, or something.

The original value indicators are really handy, especially when you’ve made some major changes in your pattern, and you’re not sure about what you’ve done. Honestly, I didn’t think I’d care about this feature when I read about it. But, I’m sold. It’s nice to be able to back track, when I’m out of undos.

It’s great seeing the old colors back on the new electribes. The blue, and the red look amazing side, by side. And the numerous LEDs housed inside of both units, I think, actually look better with the more colorful exterior. With the black, it’s really easy to see every spec of dust, or scratch that appears on your unit. Which, if you’re touring, or playing a lot of shows, you know this is par for the course. But, if looks and keeping things in their original condition, as a collector, is a big deal, you’re really going to be thankful you picked these up. 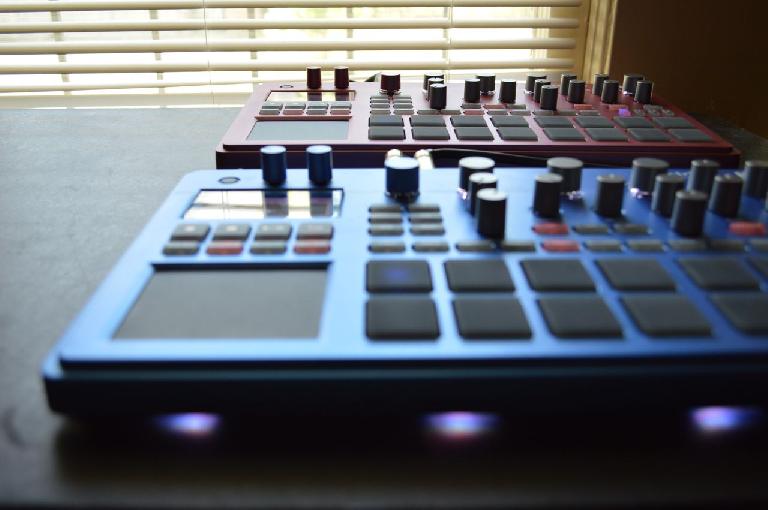 There are also 200 new patterns ready for download and installation, straight from Korg... And, friends. Luke Edwards, Ian Bradshaw, Hotaru-Ya, and more have contributed a wide range of patterns, varying in style and BPM. It’s great to see new examples from artists who have been spending some time with the electribe 2 series, as it’s fun to explore additional programming tricks and ideas left behind. And, not to mention, it’s really nice to hear patterns that push electribes a little bit. 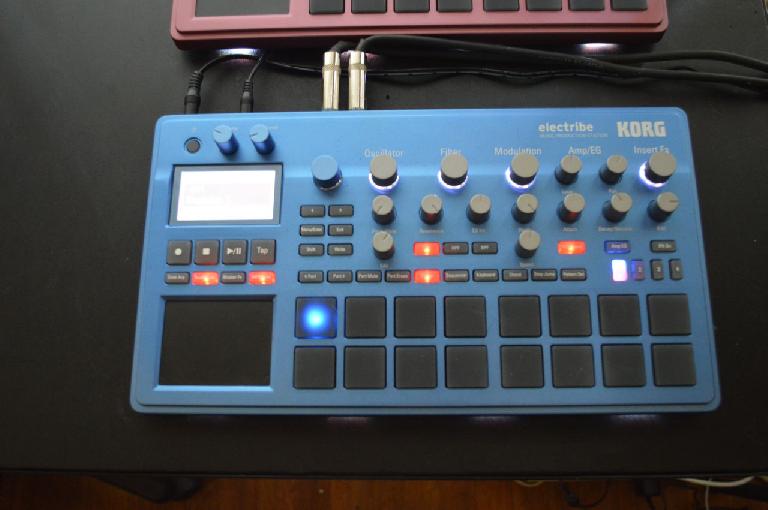 Actions speak louder than words. And, Korg, through their actions, are continuing to show that they are serious giving their user base what they want. The electribe 2 and the electribe 2 Sampler were already very capable machines. But, by continuing to build on what’s there, instead of just jumping on to an electribe 3, and charging everyone for it, we have a chance of seeing another electribe, or two reach legendary status. I definitely think that some additional polish is in order. A function for saving synth patches, and sharing them outside of just storing them in patterns would be greatly appreciated. As well as a way to share patches with friends. But who am I to point this out? Korg has shown that they are more than interested in what we’re after. I’m sure both of these suggestions are already on the list!