Understanding modulation in its different forms can help you to gain a better mastery of recording, mixing and producing your tracks. Joe Albano explains what it's all about.

Modulation—in the context of audio and music production—could be described in the most basic way as changing some aspect or property of a sound. But that general definition only hints at the various ways modulation is employed in the audio world.

At the technical level, modulation is often used encode a signal for transmission or conversion. Amplitude Modulation and Frequency Modulation are the basis of traditional AM and FM radio transmissions, in that case encoding a carrier wave for the purpose of transmitting the audio signal. In digital recording, amplitude modulation is again utilized under the hood as part of the analog-to-digital conversion process, and Pulse Code Modulation—a.k.a. PCM—is used to encode a digital pulse wave with a description of the audio signal. Still under the hood, Frequency Modulation is the underlying process that generates new overtone structures in FM Synthesis, for the purpose of creating musical sounds and sound effects in instruments like the classic DX7 synthesizer and the many virtual instruments that employ that technique for sound creation.

In recording and mixing, Modulation is an integral part of several of the most common effects, including chorusing, flanging, and phasing. And when it comes to synthesizers and samplers, many different kinds of modulation are used to shape both the sound and playability of virtual instruments, affecting tone as well as controlling a sound over time. Let’s take a brief look at some of those modulation applications.

Probably the most common—and familiar—use of modulation in the recording studio is the periodic modulation that is responsible for the swirling, shifting aspect of the most common delay-based effects. Chorusing and Flanging both utilize delay lines with very short delay times to enrich the tone and add motion and interest to audio signals, and Phasing uses a similar approach. All depend on periodic modulation from a subsonic oscillator—a Low-Frequency Oscillator, or LFO—to create their classic effects. 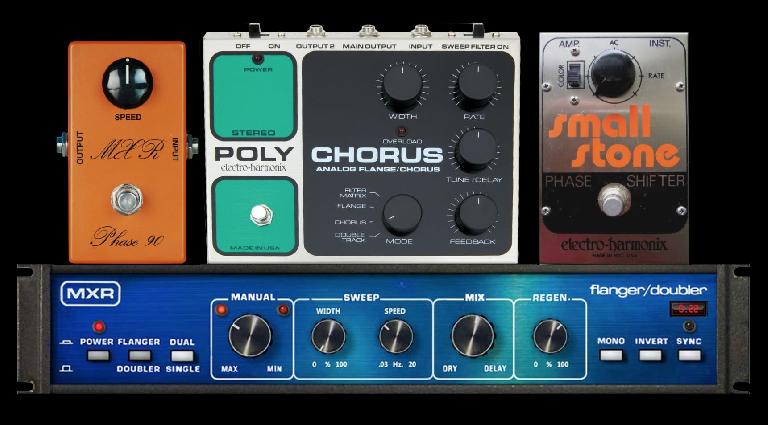 In the case of Chorusing and Flanging, an audio signal is copied and delayed by a few milliseconds (≤10ms for Flanging, ~15-25ms for Chorusing), and the delayed copy is mixed back in with the original signal. This creates a comb-filtering effect—narrow peaks and dips in the frequency response of the combined signals—which alters the tone in subtle ways, adding some extra richness. The specific frequencies affected depend on the delay time used.

For the classic effect, the LFO is set to modulate the delay time—as the delay time periodically changes different frequencies are periodically affected, creating changing, shifting tonal variations, adding motion and interest to an otherwise static effect. The shorter modulated delay times of Flanging—along with a little feedback—produce a sharper effect, while Chorusing provides a more subtle extra richness. Depending on the modulation Rate—the frequency of the LFO—the modulation effects range from a slow, subtly shifting tone.

Classic Chorusing and Flanging effects
Instead of a dedicated delay line, Phasing utilizes multiple All-Pass Filters to create tonal variations via phase shifts (very short delays), and once again LFO modulation is used, in this case to sweep the frequencies of the Filters, shifting the tonal centers of the phase shifts, creating an effect similar to Flanging but smoother and more gentle in character.
Phasing

Besides the periodic LFO Modulation employed in traditional delay effects, modulation is also used for effects that create more drastic tonal changes. One such effect is a Ring Modulator. There, Amplitude Modulation is applied, but instead of the subsonic modulation rates of LFO mod the Rate of Modulation here is above 20 Hz. While modulation rates below 20Hz create periodic tonal-shifting (as with chorusing, et al), using higher modulation Rates generates new overtones, creating sounds with new and interesting timbres. In the case of Ring Modulation, this most typically produces clangorous tones, which can be further shaped with additional control modulations, for creative sound generation and effects. 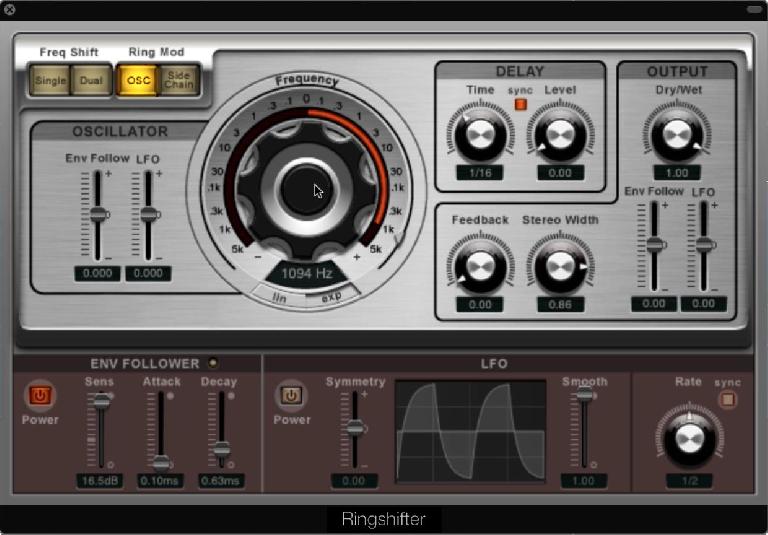 An effect that employs Ring Modulation

As I mentioned above, another application of modulation to create new overtone structures is the use of Frequency Modulation in FM synthesis. There, pairs of oscillators are frequency-modulated—the specific ratio between their (≥20Hz) frequencies determines the specific overtones that are generated. Several pairs are combined to create rich tones, which are again further modulated to shape those tones into playable musical instruments or effects. 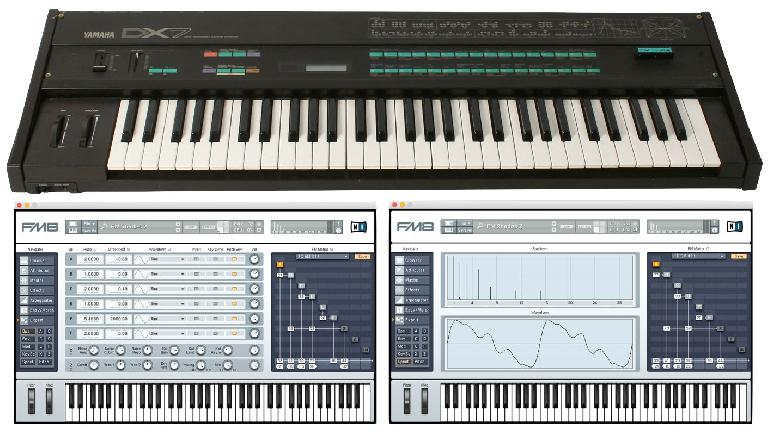 And that brings us to the other main application of modulation—controlling various aspects of instrument sounds in synthesizers, samplers and other electronic instruments. In this context, modulation refers to a much broader use of modulating signals—various modulation sources are assigned to different aspects of an instrument (or effect patch), shaping not only tone but also the playability of the instrument. 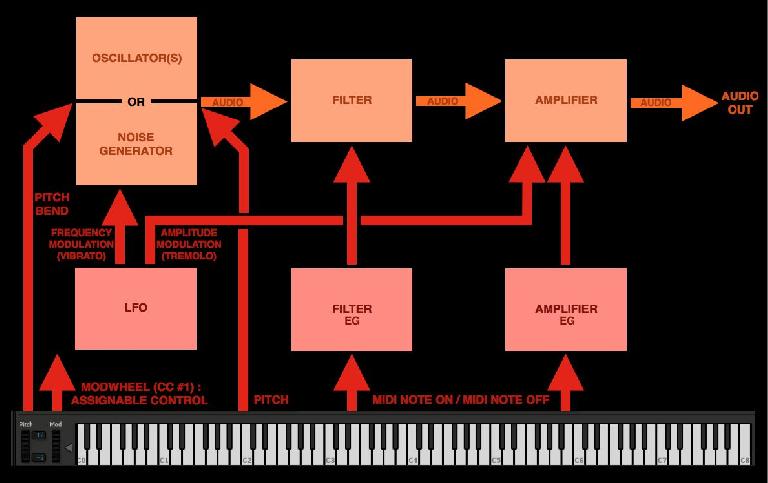 The above diagram shows the most basic modulation sources and destinations is a typical synthesizer patch. Envelope Generators are applied to the steady tones coming from the oscillators (sound source) and the static lowpass filter that further shapes the tone—they modulate amplitude and filter cutoff (tone) over time, giving shape to the individual notes played. Attack, Decay, Sustain, and Release settings determine how quickly notes build up and die away when played on the keyboard, creating a playable instrument.

And the Keyboard itself is also a modulation source—in this case playing a note modulates the frequency of the basic tone coming from the oscillator. The keyboard is calibrated so the control signals (the modulation signals) from the various keys correspond to standard musical keyboard intervals—in conjunction with the Envelope Generators shaping the volume and tone of each played note, these two primary modulation sources are at the heart of any kind of electronic instrument design.

Additional modulation sources include the various wheels and pedals used with the keyboard, which transmit MIDI messages to the instrument that can then be assigned to various destinations. More advanced synths and instruments may include a Modulation Matrix, where multiple modulation sources can be assigned to various destinations, allowing for complex modulations as part of a rich instrument or effect patch. With traditional modular synths these kind of connections were made with patch cables, but in modern virtual instruments they’re usually implemented via menus in the Modulation Matrix section, along with additional controls for setting the depth (strength) of the mod effect, and applying additional modulation to the modulators themselves, for greater control in playability or more complex special effects. 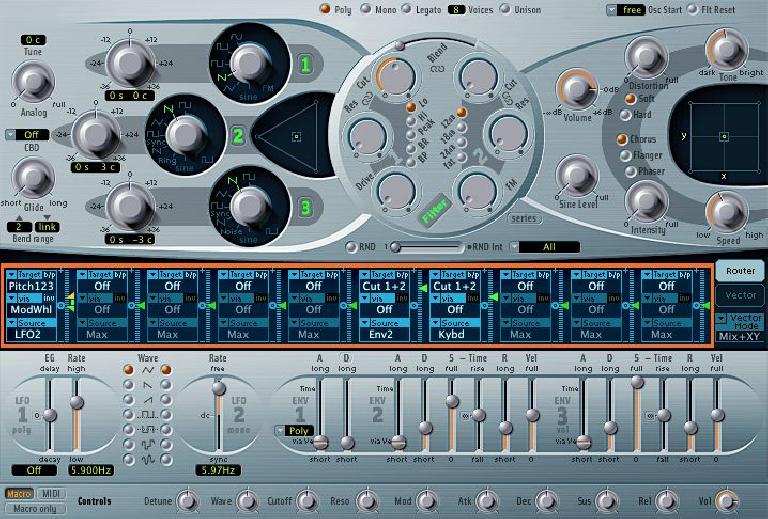 A typical Modulation Matrix in a virtual instrument

Of course I’ve only just touched on the various applications of modulation, but hopefully it was a useful introduction for those new to the concept and application of modulation in the studio (and on stage). Especially in the instrument/synth applications, further investigation should provide additional uses and creative ideas for adding richness and control to all kinds of audio signals.

Learn more about the science of audio: https://ask.audio/academy?nleloc=new-releases