A Producer's Guide To Sidechain Processing

Sidechaining can be an invaluable tool for controlling and improving your mixes. Joe Albano explains everything you need to know about this core processing technique.

Sidechain processing is a technique that allows a signal from one track to exert some control over a signal in another track. It’s most typically employed with dynamics processors—like compressors and gates—where the sidechain signal is used (instead of the main signal) to determine the application of gain reduction, with both technical and creative applications. Experienced mixers are familiar with this technique; for those less familiar with it, here’s how sidechain processing works, with a few examples.

In fact, all dynamics processors include a sidechain circuit, even when operating on the track’s own signal. 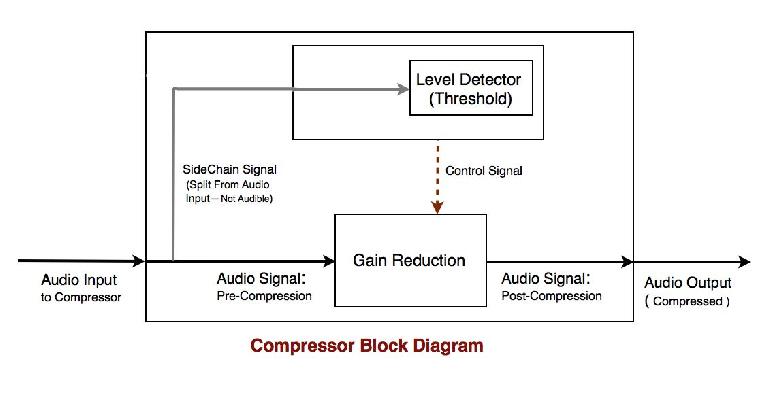 The internal signal routing of a typical dynamics processor (compressor), including the usual internal sidechain that feeds the Detection circuit

As the (compressor) diagram shows, the track’s own signal is split when it enters the processor (plug-in); the main signal path is subject to gain control, while a copy of the signal is sent to an internal sidechain which feeds the (level) Detector circuit, which determines when the Threshold has been crossed. Whenever that happens, the Detector causes gain reduction to be applied in the main signal path, which is the only audible signal path; the compressed signal then exits the processor.

But when engineers refer to “sidechain processing” they mean substituting a different signal for the track’s own audio—having a signal from another track feed into the Detector circuit, as shown in the diagram below. 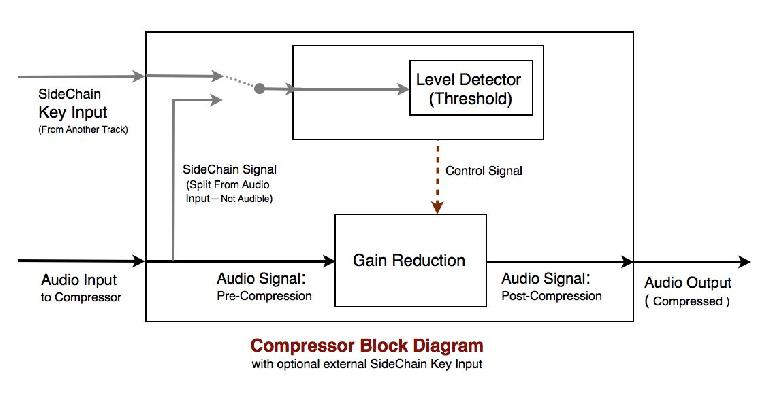 The internal signal routing of a typical dynamics processor (compressor), including an option for sidechain processing via an external sidechain that feeds the Detection circuit

When an external signal is fed into the Detector, then gain reduction will occur when that external signal crosses the Threshold (instead of when the track’s own signal crosses the Threshold), but the gain reduction is still applied to the track’s own signal. So the level variations of the external sidechain signal are controlling the compression (or gating) of the main signal—the track that has the processor inserted on it. Having one track’s level control another has a variety of uses; here are a few examples.

De-essing is selective gain reduction, applied specifically for the purpose of reducing objectionable high-frequency harshness in a vocal recording that occurs on the letter “S” (a common problem, even with good/experienced vocalists). While there are dedicated De-essers, any compressor can perform this function if it offers the user enough control over the internal sidechain signal.

The goal is to apply gain reduction only when harsh “S”s come along. But these S’s, while unpleasant, may not actually be louder than the rest of the vocal signal, so just the S’s must be boosted in level so the Detector can distinguish them from the normal parts of the vocal signal. Some compressors include an EQ that only affects the signal copy in the internal sidechain—strongly boosting the appropriate frequency range (usually 6-8kHz) of the sidechain signal can accentuate the S’s enough so the Threshold is crossed only when the S’s occur, causing gain reduction to be applied to the main signal path only at those moments, reducing the harshness, effectively de-essing the track. The effect of the EQ is never heard on the main signal since it’s only applied to the internal sidechain signal copy, which is never heard, so the tonality of the vocal itself is unchanged except for the desired de-essing. 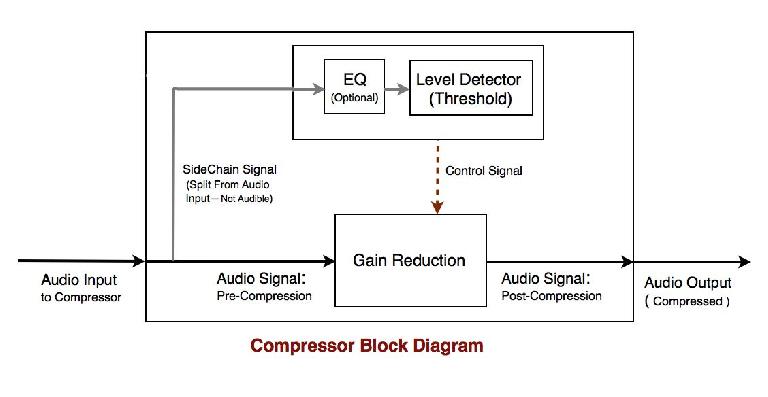 A compressor with an EQ in the internal sidechain signal path

If a compressor doesn’t have an internal EQ, but does have an option for sidechain processing using an external signal from another track, then the vocal part can be copied to another track, EQ’d there, and the EQ’d copy can then be routed (only) to the original track’s sidechain, accomplishing the same thing (see previous Fig 2).

An extremely common application for external sidechain compression is Ducking. Everyone’s heard this—background music is playing and an announcer’s voice comes on, and the background music is reduced in level—ducked—lowering its volume it so it’s well below the voiceover level to allow for better clarity and intelligibility; when the voiceover stops, the background music/signal returns to its normal volume. Of course, this can be accomplished by manual gain-riding, but it can be easier and smoother-sounding to do it automatically via Ducking with a compressor.

The compressor is inserted into the music track, which needs to be reduced in gain whenever the voice comes in. The compressor’s sidechain input is set to receive the signal from the vocal/voiceover track, and the Threshold is set so that whenever the voice comes in it crosses the Threshold, causing the level of the music to be reduced—ducked—under the vocal (naturally, the Ratio will determine how much gain reduction is applied). When the voice stops speaking, it’s sidechain level (at the Detector) will drop back below Threshold, and the music track will return to its normal level. To avoid sudden jumps in level a moderate Attack time is used (set by ear), and a longer Release time is set, so the music won’t pump up and down in level during short pauses in the vocal track; the exact settings will depend on the voice’s phrasing and the speaker’s cadence.

Sidechain processing is also used for more creative applications. One classic trick is to utilize a sidechain to layer an additional sound with a weak snare or kick drum track. White noise can be added to a dull snare, or a deep low-frequency sine wave tone can be added to a thin kick, to beef it up and add a little tone. In both cases a Gate with sidechain control is employed to bring in the layered sound only on top of the desired drum(s).

In the case of the snare, a second track is created, and a white noise generator is inserted, followed by a Gate with an external sidechain option. Since the noise signal is continuous, a copy of the (dedicated) snare track is fed to the sidechain (via a Send, typically), and the Threshold is set so that the noise signal is gated out when the snare isn’t playing, but the Gate opens up when the snare signal is present. The result is that a burst of noise is gated along with the snare—the noise can be blended in to an appropriate degree.

To beef up a thin kick drum, the setup is the same, but instead of noise an oscillator is used in the extra track, generating a continuous sine wave at a suitably low frequency (50-100 Hz or so—lower frequencies within that range will add more subsonic thump, higher ones more “boom”). Once again, the Gate is inserted in the sine wave track, and the kick drum signal is fed into the Gate’s external sidechain input, with the Threshold set so the Gate only passes the sine wave when the kick plays.To fine-tune the decay of the enhanced signal, the Gate’s Release time can be adjusted to either clamp down tightly on the sine wave or to let it ring out a little after the kick, for a more dramatic boom (think 808 kick).

Another common sidechain application is to tighten up a loosely-timed kick drum and bass guitar part. If those key elements of the rhythm section are not as tight as they need to be, the bass can be tightened up to follow the kick more closely via sidechain processing. Once again a Gate is used, this time inserted on the bass guitar track. The kick is fed into the Gate’s external sidechain input, so that the bass can be made to play—or specifically to attack—only when the kick plays.

Here the Gate’s Attack and Release settings are key. The Attack can be set to ensure that the bass always enters with or slightly (a couple of ms) behind the kick, and the Threshold, Attack, and Release settings can even force the bass to play a part more tightly matched to the kick. The Release (and Hold) time controls can be set to determine the length of the bass notes: they can be shortened so they’re right with the kick at all times, or longer Release/Hold times can be used, to allow the bass notes to ring out more (assuming they were played that way). 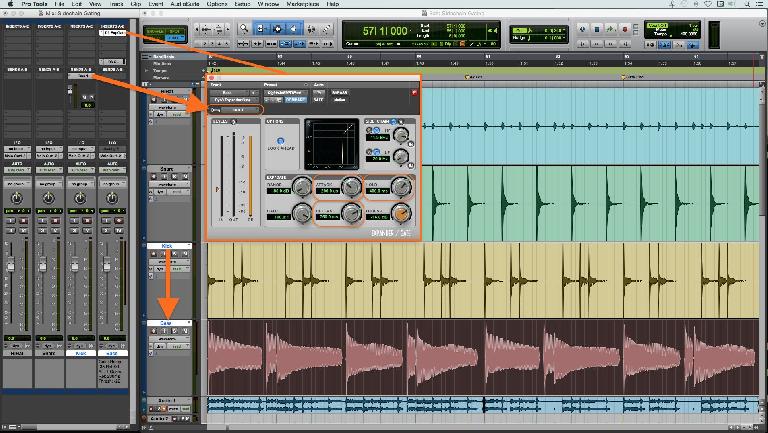 Settings for a Gate with sidechain control as described above

Audio example - A bass not tightly following the kick; that same part Gated to better match the kick’s part & timing; decay of the bass notes shortened by the Gate’s Release and Hold controls

These are just a few examples of the use of sidechain processing in mixing. Any time one track might benefit from level changes to make it work better when another track is present, sidechain processing can be employed as an alternative to manual gain-riding, for smoother and more efficient control.

Take your mixing and production skills to the next level: https://ask.audio/academy?nleloc=new-releases