Music software company XILS-lab is proud to announce availability of R.A.M.S.E.S., an all-new PC- and Mac-compatible multi-effect plug-in with a difference, as of December 11...

Developed in close collaboration with fellow French sound design doyen Le Lotus Bleu (a.k.a. Laurent Bourgeon) to bring any audio signal to life with rhythm and motion, R.A.M.S.E.S. stands for Rhythm And Motion Stereo Engine System. So what does that mean, exactly? Well, try imagining a multi-effect plug-in that adds (or removes) true stereo depth and space; reshapes, re-filters, and re-envelopes every sound source; creates hypnotic and robotic sequences, yet ably adapts to the most subtle or complex human rhythms; and makes digital synths sound analogue! Anyone who thinks that sounds too good to be true... think again! That’s R.A.M.S.E.S.

So how does it do all that, then? Well, in a nutshell, R.A.M.S.E.S. takes the so-called mask concept first introduced in XILS-lab’s Le Masque: Delay plug-in — whereby only masked parts of a time-based grid zone area are processed by the delay and associated controls to produce even more rhythmically flexible results — and effectively magnifies it threefold, thanks to dedicated grids based on masks for FILTER, PAN/LEV, and ADVANCED processing. Put it another way; think of masks as being like advanced step sequencers, only the length and position of each ‘step’ (or mask) is freely assignable. And thanks to their respective in-depth controls — total control of the multimode analogue FILTER with dedicated hardwired envelope and LFOs; control PAN and volume (LEV) with dedicated envelope and multi-wave LFO; modulate any of 91 R.A.M.S.E.S parameters (ADVANCED) — each of those three grids are capable of producing some seriously radically rhythmical effects, either independently or when applied altogether.

Other dedicated controls include those found in the multimode FILTER main area, where users can select filter type from LP12 (two-pole lowpass), LP24 (four-pole lowpass), BP6 (two-pole bandpass), BP12 (four-pole bandpass), and HP12 (two-pole high- pass), as well as set the FREQ. (cutoff frequency) of the filter, RES. (resonance) — from no resonance to self-oscillation, and DRIVE, increasing the internal non-linearity response to add analogue-sounding distortion to the incoming signal.

As implied by full name, the total audio path in R.A.M.S.E.S. is in true stereo, so it should come as little surprise to learn that users can control precisely the stereo balance point using another set of specific controls in the true stereo engine and VCA/volume main area: BALANCE (by moving the red ball, the signal can be placed in the left, right, or centre of the stereo scene); STEREO WIDTH (adjust the width of the bar to reduce or enlarge); LEVEL (adjust the general output level at the end of the plug-in’s signal path); CRUSH (adjust a simple, yet efficient bit/sample rate reduction, adding more digital distortion to the sound). 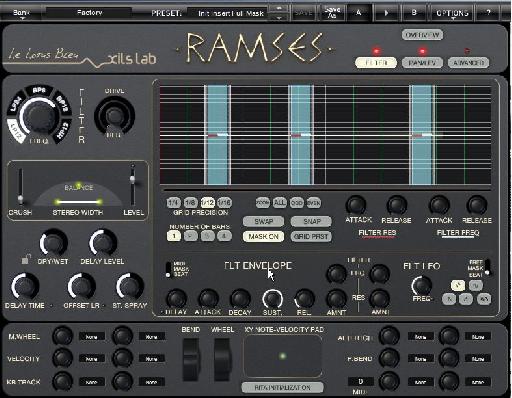 Ramses The Great is considered by historians to have been the greatest ancient Egyptian pharaoh of them all. As a rhythm and motion multi-effect plug-in par excellence R.A.M.S.E.S. is also a pretty powerful proposition in its own right, regardless of its inspired name. Now users are only limited by their imagination, why not make musical history with R.A.M.S.E.S.

R.A.M.S.E.S. is a serial number protected-product — no dongle required — and can be directly downloaded as a 32-bit (Intel and PowerPC) and 64-bit (Intel) compatible multi-effect plug-in for Mac and Windows in various formats (AAX/RTAS, AU, and VST2.4) from here: http://www.xils-lab.com/products/R.A.M.S.E.S.html