Language
Sample Logic tell us that their new Kontakt instrument, Arpology, is the next step in music. If you're into creating arpeggiated sequences without boundaries, you NEED to check this out.

For more info and to pre-order visit:

ARPOLOGY â„¢ is Sample Logic's most groundbreaking achievement to date; the world's first virtual instrument dedicated entirely to arpeggiated/sequenced instruments.  ARPOLOGY go's far beyond, breaking the box of the "everyday" arpeggiator. It employs an entirely new approach to step sequencing. The core of ARPOLOGOY has been designed around Sample Logic's newest invention, the powerful "Step Animatorâ„¢" - a step-sequencer and arpeggiator fused into a single engine for animating complex melodic and rhythmic patterns on a per step basis, eliminating the limitations of traditional sequencing. 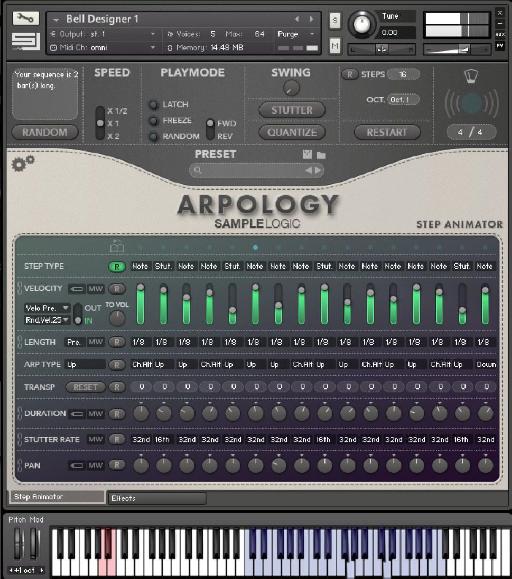 ARPOLOGY is powered by Kontakt player and includes over 550 instruments and multis spanning all musical genres. It also comes preloaded with over 150 unique and inspiring Step Animator preset patterns that will dramatically change the sound of any loaded instrument and in real-time. As if that wasn't enough, ARPOLOGY is the first Sample Logic product to come bundled with a fully integrated touch surface controller preset built in TouchOSC for tablets, achieving user control that Kontakt alone cannot. With this custom designed control surface interface, the power of ARPOLOGY is transformed into a hands-on, touchable, and creative experience ideal for both live performance and sequencing in a DAW. ARPOLOGY changes the way music is made!

Watch & listen to this amazing instrument in action here:

Step Animator - The Interface: ultimate control on a per-step basis!

The Step Animator engine is the driving force behind ARPOLOGY. Developed from the ground up, the Step Animator engine welcomes a new approach, animating sound over time. The dynamic controls of the Step Animator are strategically arranged to maximize power and creative control in an efficient interface. This kind of control is the first of its kind and is like no other Arpeggiator, providing the flexibility to quickly sequence complex rhythmic and melodic patterns with amazing results. Uninhibited control is only half of what the Step Animator accomplishes. The other half is in how easy the Animator can produce insanely creative sounds. It is mind blowing that such unique and inspiring sounds can be achieved all at the MIDI level. The Step Animator sets ARPOLOGY apart as not just another sample library, but rather a complex sonic animation tool that can generate infinite creative results. 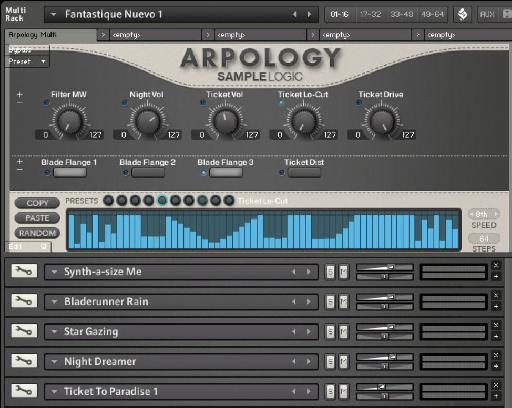 Since every step can be set to any note length and the sequence to any number of steps, it could be a real challenge to create sequences that are complete whole bars/measures aligned to the beat and meter. To make things super simple, set a desired meter, to 4/4 for example, then as steps are added to a sequence a read out is displayed in the parameter display box indicating what note lengths need to be added in order to complete a bar at the established meter. To expedite the process of devising perfect metronomics, there is a quantize button. When pressed, this feature will auto quantize the current sequence based on the established meter. This makes it very easy to craft custom presets that are perfectly in time. Skip the theory altogether and use the Preset Browser.

With over 150 ready-made presets, the Preset Browser is the go to solution for drastically changing the animation of an instrument quickly and on the fly. Consider it the central nervous system of the Animator, simply arrow through presets in real-time while playing an instrument as well as load and save custom presets.

Every instrument comes stocked with a Main Effects tab.

Surface Controller Integration - Touch the sound with a tablet.

ARPOLOGY also comes equipped with an awesome TouchOSC preset that, when installed on a tablet, provides the ability to tangibly control the interface in new ways that cannot be achieved with the Kontakt software. A lot of time was spent crafting up a fresh, outside the box, approach for delivering a tableside touchable controller that transports the interface of ARPOLOGY to new heights. The main focus behind this tablet integration is to provide a set of easy to use controls that promote creativity and expedite user control beyond Kontakt. For example, the controller comes with 4 "X/Y" sliders locked and loaded to instantly warp the sounds of every instrument in real-time.

In the design of ARPOLOGY, Sample Logic felt that it was important to use a wide spectrum of instrument recordings spanning all genres and sound types such as: choirs, woodwinds, brass, strings, world instruments, sound effects, various field recordings, industrial tools, machinery, synths, and much more. Sample material was carefully and selectively hand picked from key sample sets from the entire Sample Logic vault of over 200 gigabytes of already recorded material used in SL's previous products. Once gathered and selected, this material was then used as the clay, which now has been morphed and animated into a series of never before heard instruments that will blow anyone away.

The instruments are divided into 3 main categories:

Multis are also divided into 2 categories:

Kontakt is continuously being updated. For the latest system compatibilities visit the Native Instruments website.