Language
One of the announcements at NAMM 2016 that really impressed us was regarding the upcoming (free) Rob Papen PRISMA. Essentially it's a software plug-in host that stacks multiple synth plugins together.

ECHT, THE NETHERLANDS: virtual instrument and effects plug-in developer Rob Papen Soundware is proud to announce the upcoming release of PRISMA, a useful utility plug-in for Mac (32- and 64-bit, AAX, AU, and VST for Mac OS X 10.6 or higher) and PC (32- and 64-bit, AAX and VST for Windows Vista, 7, 8, and 10) that allows any Rob Papen plug-in owner to stack several software instruments — including instances of the same plug- in or otherwise — as a ‘single’ sound source, scheduled for release towards the end of March 2016...

Who better to make the formal introductions, then, than the company’s namesake Managing Director, Rob Papen, professional sound designer and resident Rob Papen progressive product ‘dreamer’ par excellence: “PRISMA provides the Rob Papen ‘sound garden’ with ways of providing terrific tone colours by combining these into a single ‘prismatic’ sound source,” he starts, somewhat poetically. “Powerfully, PRISMA stores those stacked software instruments and all their respective settings as a single preset. Of course, there’s a whole lot more to this than might first meet the eye since users can open each single software instrument individually and easily edit and creatively combine it wonderfully with any other stacked software instruments from Rob Papen to create a whole new range of PRISMA sounds!” 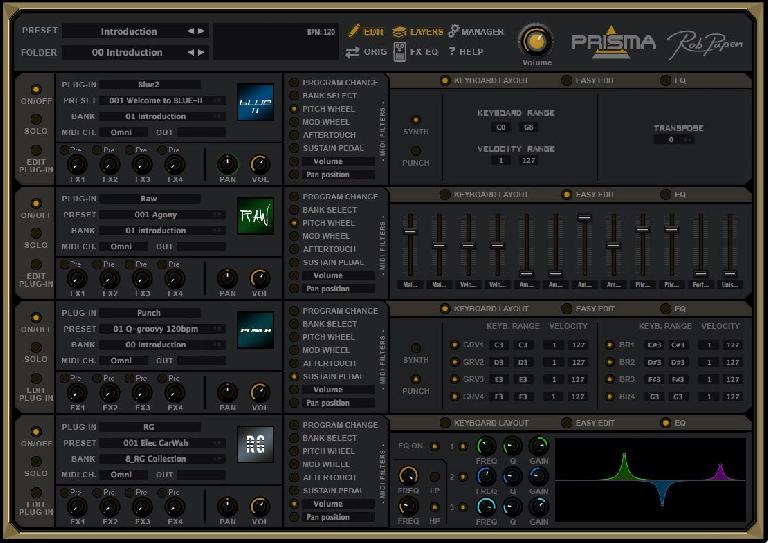 Seriously smart features of note include individual VELOCITY or KEYB. RANGE (keyboard range) split layers for creative combinations. Owners of Rob Papen’s Punch — its award-winning drum synthesis/sampler software instrument with built-in grooves that can be triggered — will take delight in the fact that PRISMA perfectly adapts to that feature favourite by also allowing keyboard range selection for those grooves. Get into the groove with PRISMA by using Punch to generate background rhythms!

Creative combinations within PRISMA are almost limitless. Let’s try picturing a PRISMA preset with a pad from BLUE-II, for instance — itself excellently embodying Rob Papen’s present-day vision to devise a powerful dream synth by building upon the success of the original BLUE, a bona fide soft synth classic developed in close collaboration with RPCX (Rob Papen ConcreteFX) partner and music software developer Jon Ayres nigh on a decade ago (cleverly combining FM and subtractive synthesis with Phase Distortion and waveshaping synthesis to create self-styled ‘Crossfusion Synthesis’) and skyrocketing its innovations onwards and upwards, together with an arpeggiated sound, say, from Predator — ‘phat’ analogue-sounding soft synth with killer presets and first-class features from Rob Papen, combined with a cutting- edge sound from Blade — representing the cutting-edge of soft synth development, and adding a groove from Punch... picture perfect!

PRISMA also has four top-quality FX on board, allowing users to bypass the individual software instruments’ inbuilt effects to save on computer resources, ready for building picture perfect PRISMA sounds!

PRISMA really comes into its own when used with eXplorer-III, The Complete Rob Papen Synth & Effect Collection, combining all of the company’s multi-award-winning Mac- and PC-compatible software instruments — including the relatively recently-released RAW soft synth specialising in ‘distorted’ sounds specifically suited to EDM (electronic dance music production) and beyond — and also all of its critically- acclaimed effects plug-ins into an attractively-priced performance and sound design dream bundle to die for. Fortunately, eXplorer-III also installs PRISMA as part of the bundle, so eXplorer-III users will no longer have to worry about installing it for themselves.

Either way, welcome to the wonderful world of PRISMA. Why wait? It’s available for free and simply sounds superb, whether using Rob Papen’s professionally-programmed PRISMA presets or creating new ones!

Rob Papen himself demonstrated an advanced version of PRISMA in Hall A, Booth #6825 at The NAMM Show 2016, January 21-24 in Anaheim, California.

PRISMA can be downloaded for free from the following dedicated product webpage towards the end of March 2016: http://www.robpapen.com/prisma.html

Note that eXplorer-III, Rob Papen’s all-encompassing software bundle, will include PRISMA as standard, bringing its total product count to 15; priced at €585.00 EUR (including VAT/tax)/$599.00 USD, this represents a significant cost saving of over 50% when compared to separately purchasing each and every Rob Papen virtual instrument and effects plug-in included!

2equals3
Yep, i'm pretty sure this is Awesome new tech.. and Free, for the most part.