Language
We all want out mixes to sound good no matter the device our audience listens to it on. MixChecker simulates a variety of devices (Hi-Fi, smartphone, TV, headphones) so it will sound great everywhere.

MixChecker is a simple, but bloody brilliant idea. And it's great to see Audified come out with such a polished, useful plug-in to help bedroom producers and mixing engineers alike make their mixes sound as good as possible across the wide range of devices used to listen to music these days.

Our friends at Audified showed us a prototype version back in April and it got our mixing juices flowing... and we've got a review of Audified's MixChecker coming very, very soon. Stay tuned to AskAudio... in the meantime, here's the press release about MixChecker with a short video intro too.

BOSKOVICE, CZECH REPUBLIC: host application and audio effects developer Audified is proud to announce availability of MixChecker — a must-have mixing assistant plug-in that transforms studio monitors into classic reference monitors or one of several consumer devices to instantly improve mixes — as of May 16...

Mixing music or other content for consumer consumption is an art in itself, one that takes time to master. MixChecker saves time when inserting it as the last plug-in in the master output track of any DAW (Digital Audio Workstation) project to transform studio monitors into classic reference monitors or one of several consumer devices at the press of a (virtual) button. But why would anyone need to do that?

Think about it... if you’ve ever wondered why music mixes (or videos, movies or showreels) sound worse when moving out of the comfort zone of the studio and into the real world — why it is that they lose the clarity and punch deftly delivered by amazingly accurate-sounding studio monitors, in other words — then try this for an answer: as they are not listening to similar studio-quality playback devices, consumers cannot hear what you hear. However, surely it is better to ask: do you hear what they hear?

Which was exactly the thinking behind bringing MixChecker into DAWs the world over. As Audified Marketing Director Jakub Turecek explains, “Ex-broadcast pros from our team always wondered, ‘Why do our trailers always sound so good in the studio, but never the same when you catch them on air?’ When they realised, they said, ‘We should have a TV and a radio in every edit room, so that we can mix directly for TV or radio.’ When they joined our team they expanded upon this idea since sound engineers who mix for iPhone or iPad computer games and YouTube content creators all face the same problem: ‘Do we really need so much gear in our studios? Surely there has got to be a more clever and more convenient way to handle these issues?’” 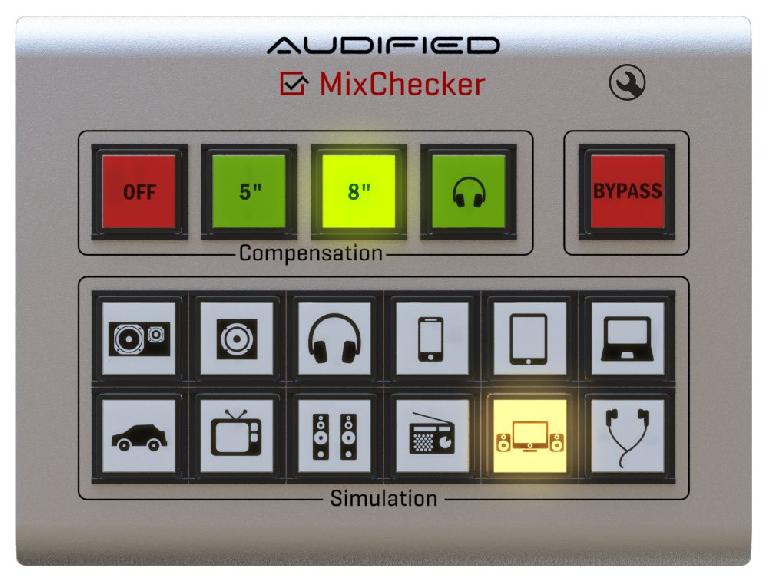 Indeed, issues such as those commonly faced by broadcast engineers are now even more common. Consumers — the everyday people for whom that content is mixed — do not use high-end studio monitors, but often use desktop speakers, tablets, and smartphones to satisfy their everyday listening needs, while watching TV and listening to music in the car remains routine. Best mixing practice today, therefore, involves ensuring that mixes are going to sound the best that they can on a wide range of different devices that sound so wildly different by their very nature — not just on high-end studio monitors. Meet MixChecker, then... the clever and convenient mixing assistant plug-in that takes all the pain out of checking mixes.

Make-do-and mend-mentality-mixing is a thing of the past with MixChecker, meaning no more time wasted exporting mixes to smartphones or burning CDs to listen in a car before going back into the studio to tweak the mix only to have to repeat the tiresome process time and again. As an altogether more convenient and clever software solution, MixChecker can perform a quick round of tests in only a matter of seconds, allowing users to get on with the task in hand — making mixing corrections at a (key)stroke, still fresh from knowing what the problem in the mix actually was!

Working with MixChecker is simple. Straightforward functions are separated into two specific sections: Simulation accesses acoustic models of several consumer devices and classic reference monitors — simply select the device you want to check the sound of your mix on by pressing a single button clearly labelled with an instantly-recognisable icon... indeed, cycling through these buttons bring about an authentic overview of how the mix should sound across a variety of realistic real-world listening devices; not all studio monitors deliver a flat frequency response, however — hence the Compensation control section... select from four more clearly-labelled buttons to tell MixChecker that you are using average 5” or 8” speakers or headphones and listen to the resulting sound change accordingly (although high-quality studio monitor owners should simply select OFF). The BYPASS button turns off all processing, ensuring that the signal passes through MixChecker without being treated.

There you have it, then. Thanks to Audified taking the time needed to measure the frequency responses and behaviour of all the available devices in laboratory conditions to create models that are true and faithful, MixChecker makes mixing for the people plain sailing. So do you hear what they hear? Yes is the answer and you know that for sure!