Language
Yamaha tell us that their new DBR and CBR series of loudspeakers add powerful features with an aim to bring more power and portability to their loudspeaker lineup.

The DBR's Class-D amplifiers deliver up to 1,000W of power, achieving an impressive maximum SPL of up to 132 dB with consistent sound quality and performance. Yamaha technicians carefully selected the transducers and then customized them to perfectly match the amplifier's properties to deliver high output power with minimal distortion. The new lineup also features Yamaha's extremely accurate wide dispersion constant-directivity horn that evenly projects the DBR's deep bass, clear midrange and accurate high frequencies to the outer-most edges of a broad coverage area. 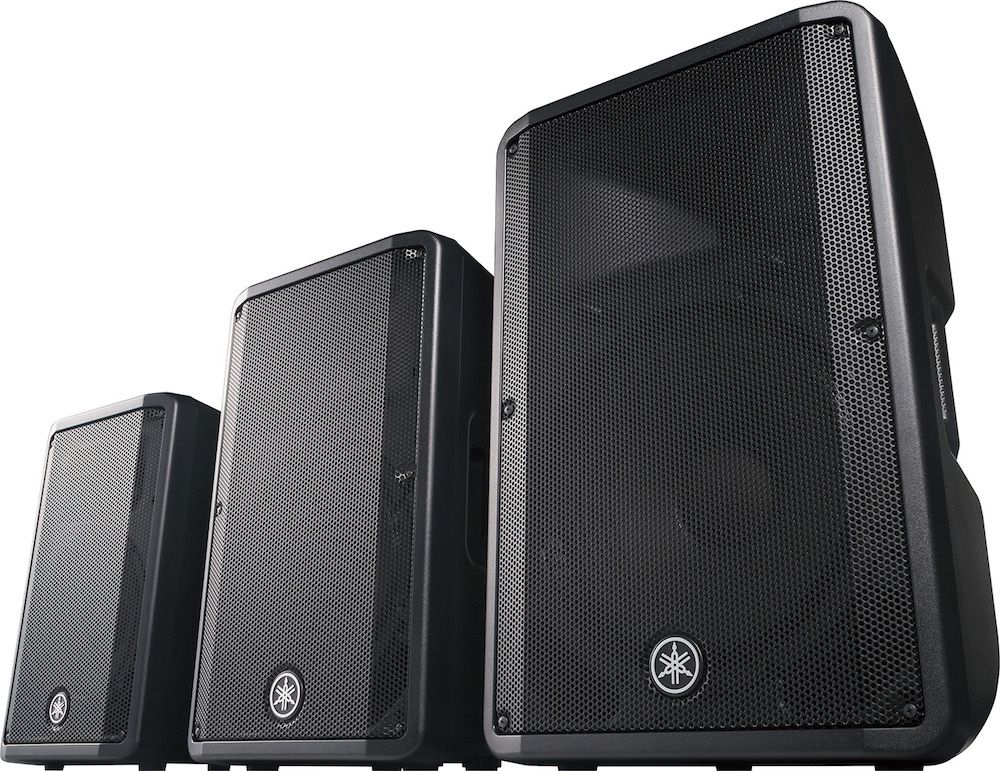 Portability and versatility factor heavily into the DBR Series' design, which provides a rugged, compact and lightweight plastic enclosure fitted with a sleek steel grille and ergonomic handles for easy transportation and setup. The DBR also features an optimized 50-degree wedge angle for floor monitoring use, while the symmetrical cabinet shape of the DBR12 and DBR15 allows them to be placed in a “mirror-mode” configuration. All models come equipped with rigging points compatible with optional speaker brackets and eyebolts for installed applications.

Each DBR model also includes an easy-to-use 2-channel onboard mixer. A combo jack on CH1 accepts both XLR and TRS Phone, allowing for either mic or line level inputs. In addition to a combo jack, CH2 includes RCA pin jacks for input from CD players or stereo line-level sources. The mixer offers the ability to select either CH1+2 MIX, or CH1 THRU to pass the signal from CH1 only.

The CBR Series, Yamaha's newest lineup of passive loudspeakers, delivers high-quality sound with impressive power, while offering exceptional portability. The CBR10, CBR12 and CBR15 are lighter than their DBR counterparts and do not require power cables, allowing them to easily adapt to both portable and rigged applications where access to a power supply is limited.

The CBR includes the same versatile enclosure design as the DBR Series and comes equipped with one speakON jack and a 1/4” Phone jack, enabling fast, easy connectivity for personal and professional applications. While the DBR Series attains its superior audio performance from Yamaha's advanced DSP technologies, the CBR Series is tuned by precise, in-depth analysis and adjustment of an internal passive network. This results in high-definition, low distortion sound, even at high output levels when used in combination with an external power amplifier such as a P-S Series power amplifier or EMX Series powered mixer. Additionally, the protection circuit limits excessive input to the HF driver to reduce the risk of the damage. Combined with a highly responsive LF unit, the CBR Series remains reliable even when pushed to extreme limits.

“With the introduction of the DBR series, the intelligent DSP technologies developed for our acclaimed DSR and DXR Series are now finally available in our most portable powered loudspeakers, setting a new bar for great sound in an affordable package,” said Nithin Cherian, marketing manager, Live Sound, Yamaha Corporation of America. “The CBR Series models are an impressive addition to our passive speaker lineup, offering sound solutions for a wider range of customers who are seeking high-powered, clearly defined sound in a portable, flexible design.”