Language
If you have one of Yamaha's MG series XU mixers (or are thinking of adding one to your setup) then you're going to really appreciate Yamaha's free MG Rec and Play app for iPhone and iPad. 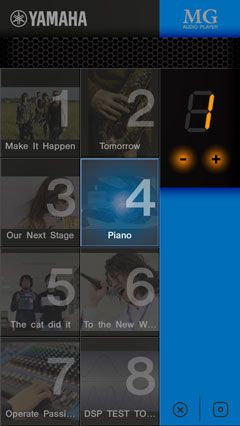 The new MG REC & PLAY app enables high-quality recording, as well as fast and easy playback of songs and sound effects, by simply connecting an iPhone/iPad to any MG Series XU model via an Apple Camera Connection Kit or Lightning to USB Adapter. This intuitive application can be used for a wide range of purposes, including recording songwriting sessions, band rehearsals and live gigs, or providing background music or sound effects for parties, live concerts and other entertainment events.

The audio recorder function lets users record two tracks from the stereo bus on the MG Series XU models in high-quality WAV format. The sampling rate ranges from 44.1 kHz, 48 kHz and 96 kHz depending on the requirements. A simple, user-friendly interface allows for visual monitoring of the recording settings and status. It also provides users with instantaneous playback of recently recorded material, which is particularly useful for sound sketching or song composition.

The audio player function features nine separate banks with eight tiles that can each be assigned up to eight songs or sound effects from an iPhone/iPad music library. This provides users with high quality playback of up to 72 songs and sound effects by simply touching the assigned tile image of each corresponding audio file. The instantaneous playback afforded by MG REC & PLAY lends valuable flexibility to live performance applications requiring background music, triggered backing tracks and musical accompaniment, along with other situations that require the use of sound effects. 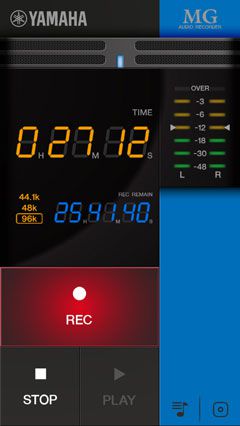 'The MG REC & PLAY app is a practical, user-friendly tool that adds flexibility to the MG XU consoles and lets them make the most of their mixing experience,' said Nithin Cherian, marketing manager, Live Sound, Yamaha Corporation of America.

Can someone help l have recorded using MG REC and PLAY how ever l need to share my recordings with other band members how do l go with this ? Does this app support sharing recording

Al
I need to know the same... How do I share recordings