Language
Jean-Michel Jarre said: 'I've just got miniSyn'X and am so excited, because the Synthex is a fantastic rarity. Thanks to XILS-lab for giving everyone the opportunity to play with it.' Enough said.

GRENOBLE, FRANCE: music software company XILS-lab is proud to announce availability of miniSyn'X — an authentic, cost-conscious soft synth emulation of a much-loved Eighties-vintage analogue polysynth of Italian origin that helped define the sound of an era — as of April 8...

miniSyn'X is a multi-format (AAX, AU, RTAS, VST), 32- and 64-bit polyphonic, duo-timbral virtual analogue synthesizer plug-in for Mac (OS X 10.5 and later) Windows (XP, Vista, and 7/8) that faithfully emulates the still-sought-after sound of the Synthex, a luscious, 1982-vintage, eight-voice programmable analogue polysynth independently designed by Mario Maggi and built by Italian home organ manufacturer Elka. Indeed, it was much loved by synth luminaries of the day — not least French synth wizard Jean-Michel Jarre, whose well-known Laser Harp performances still emanate exclusively from an amazing-sounding Synthex patch produced by one-time UK demonstrator/ programmer Paul Wiffen and audible in isolation in 'Second Rendez-Vous' on Jarre's multi-million-copy-selling Rendez-Vouz album of 1986. Pity, then, that the Synthex did not sell in such Jarre-like quantities during a four-year, three-stage (50-, 800-, and 1,000-unit) production run, with one last post-production unit being built especially for Stevie Wonder, such was the legendary American singer-songwriter/multi- instrumentalist/record producer's love for the future-classic instrument that initially failed to fly in the face of the-then 'art nouveau' digital age of dominating desirable FM synthesis from Yamaha's considerably cheaper, MIDI-equipped DX7, and subsequent super-selling, all- singing, all-dancing digital designs from the likes of Roland (D50) and Korg (M1). 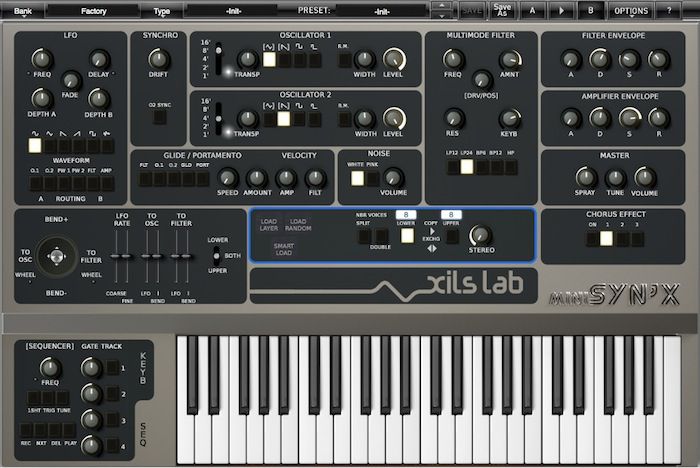 That said, with 30 knobs, six sliders, 80 switches, and a joystick — replacing traditional pitch and modulation wheels to allow greater variable realtime control over the two LFOs (Low Frequency Oscillators), oscillator, and filter modulation — spread across its spacious front panel, the Elka Synthex had some unique features for its time, including two stable DCOs (Digitally-Controlled Oscillators) per voice, oscillator cross-modulation of pulse width, multimode (Low-pass 24dB/octave, 1st Bandpass 6dB/octave, 2nd Bandpass 12dB/octave, and High-pass >12dB/octave) filters, separate envelope generators, chorus effect, and dual or layer keyboard modes. Little wonder, then, that many came to consider it a worthy musical adversary to the dominating American analogue programmable polysynths of the day, such as Sequential Circuits' groundbreaking Prophet 5 and Oberheim's outstanding OBXa — better-sounding, some said, and arguably more reliable to boot, thanks to those trusty DCOs.

While what falls out of fashion's good graces once in a while rises back to prominence, the truth is that the musical appeal of the Elka Synthex never really went away as far as Jean-Michel Jarre's analogue-attuned ears are concerned, so his excitement at hearing that the instrument in question had been authentically resurrected in software as a convenient, cost-effective package by XILS-lab is inevitable. Indeed, as the French synth wizard himself says, “Thanks to XILS-lab for giving everyone the opportunity to play with it.”

In a nutshell, then, as a dual eight-voice virtual analogue synthesizer plug-in that faithfully follows in the footsteps of its heavyweight hardware analogue ancestor, miniSyn'X combines clear and punchy DCOs with a cutting-edge emulation of the CEM 3320 chip that formed the backbone of that much-loved multimode filter to reproduce a defining sound of the Eighties era. Indeed, in doing so, XILS-lab uses its proprietary zero-delay algorithm — now in its third generation — to greatly improve the quality and perception of PWM (Pulse Width Modulation) patches, such as Jean-Michel Jarre's legendary Laser Harp sound. So what else lies under the virtual hood here? How about two synth engines that can be combined in three modes (Double, Split, and Single)? Tick. Single panel GUI for each synth engine (so users only see the controls that they need at any given time)? Tick. Up to 10 oscillators per patch? Tick. Modelled DCOs with PWM for each waveform? Tick. Up to four modelled ultra-fast envelope generators per patch? Tick. Exclusive Smart LoadTM (artificial intelligence) technology to quickly generate a good percentage of useful and rewarding patches on the fly? Tick. Three-mode BBD (Bucket Brigade Delay) analogue chorus closely emulated? Tick. Full-featured glide/portamento function? Tick? All parameters automate-able via MIDI (Musical Instrument Digital Interface) CC (Continuous Controller) messages? Tick.

There you have it, folks. For anyone seeking the distinctive sound of the “...fantastic rarity...” that is the Elka Synthex surely needs look no further than XILS-lab's miniSyn'X virtual analogue synthesizer plug-in. It ticks all the boxes, that's for sure! And that's not even taking into account additional fanciful features dreamed up by the XILS-lab dream team that would have been deemed impossible back in Elka's Eighties heyday, such as cumulative oscillator waveforms, cumulative LFO (Low Frequency Oscillator) waveforms, an enhanced four-part polyphonic sequencer, stereo scene controls, polyphony handling per engine, gang mode editing, and much more besides. It's a knockout. And priced to go. So go get it!

miniSyn'X is available to purchase as a straightforward serial number-protected plug-in for an introductory discounted price of €45.00 EUR (rising to €59.00 EUR on April 18, 2015) from the XILS-lab web store here: https://www.xils-lab.com/products/miniSyn'X.html

Note: that miniSyn'X owners can upgrade to the 'full-featured' Syn'X multi-layered synthesizer plug-in with eight fully-independent voices for an introductory discounted price of €99.00 EUR (rising to €110.00 EUR on May 1, 2015) from here: https://www.xils-lab.com/pages/miniSynX_Upgrade.html