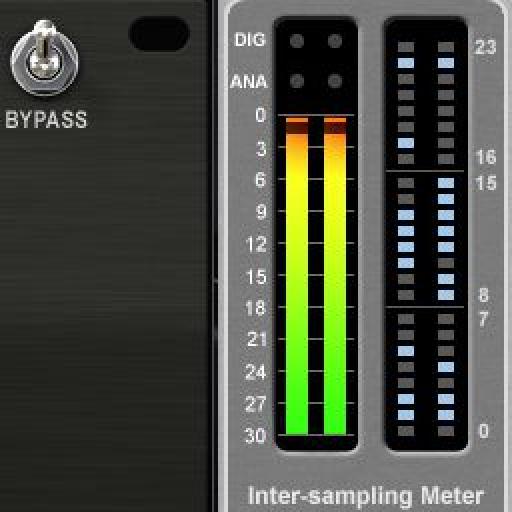 Why You Need an Intersample Meter When Mastering

Language
Whether you're mastering yourself at home or sending out to a studio, understanding what intersample Peaks are and how to avoid them is essential. Victor Mason talks intersample, DAC and distortion.

Your mix is done but a “digital bug” lays dormant waiting to be unleashed on the listener. Unless you have taken the steps needed to check for them, odds are against you that you have them and probably don't even know it. You're not alone, the vast majority of commercial mixes are laden with them. What is this Bug? It's called intersample peaks, and they are present on most mixes, yet they are chronically overlooked by many engineers. Let me explain.

Setting your Levels in the Mixer

With great tools of all sorts at our fingertips, we have a massive selection to choose from when setting up the mix on our DAWs. We use these quite often to enhance and create definition in our tracks, all competing for a space in the mix and to be heard clearly. To aid in this effort, as a good rule of thumb, channel strip levels should be kept as low as possible, between -12 and -6 dB at the most. This leaves headroom to work with during the mix for the mastering engineer, or when you've arrived at the mastering stage to be preformed by yourself. Mastering is the final stage where your mix is complete, gets the polish or treatment to give your mix a commercial quality for your given market, be it television, film, radio or CD pressing. Even MP3 uploads need consideration since they too have their own challenges, one of which is they very often bounce out hot and are played back off the web hot.

Undoubtedly you're safeguarding your final mix with a limiter or compressor at the very last stage of the output, just to be sure you do not exceed, 0 dBfs (Decibels Full Scale). In the digital domain, Exceeding 0dBfs can lead to very nasty sounding distortion and should be avoided at all costs. To ensure you're under the 0dBfs, it is advisable you actually back it off even more. Many engineers do -1 to 0dBfs at the bounce. But this can potentially lead to trouble.

Let's say the peak meter is telling you that you're dead locked into the setting you've chosen, 0 dBfs for example. In theory this means you have nothing to fear. The problem is, your metering system is designed to read a digital overage in sets of three, which means you have hit the maximum digital dB. Now your meter lights up and you know you're spot on 0 dB and have filled it to the brim so to speak.

Problem: your DAW does not account for the intersample overages which occur when your digital output is converted back into analog at the user's end via the playback medium of choice. This conversion is called Digital to Analog Conversion or DAC for short. At this point, a complex process takes place where your highly refined mix, now in the form of digital information, is then converted and made into analog but along the way, this conversion will produce overages in the form of intersample peaks. These peaks can lead to actual digital and analog distortions present in the end user's output.

So how do you fix this? Well, First you need to know if you have those intersample peaks. Your DAW meters are only telling you of the peak digital condition, but cannot tell you of the analog condition which is present at the listener's end, where your song is played back. Fortunately, there is a solution.

The solution is to see this conversion in real time during the final mixdown stage. You need an intersample meter to know this. There are hardware and software meters around which can be used for this purpose, I am going to show you a very good one made by Solid State Logic called X-ISM. This is a plug-in meter and best of all: it's FREE!

Here are some screen shots of both a 0 dBfs output which is perfectly normal and would be considered flawless by all accounts. You can hear the sound demo for it as well. 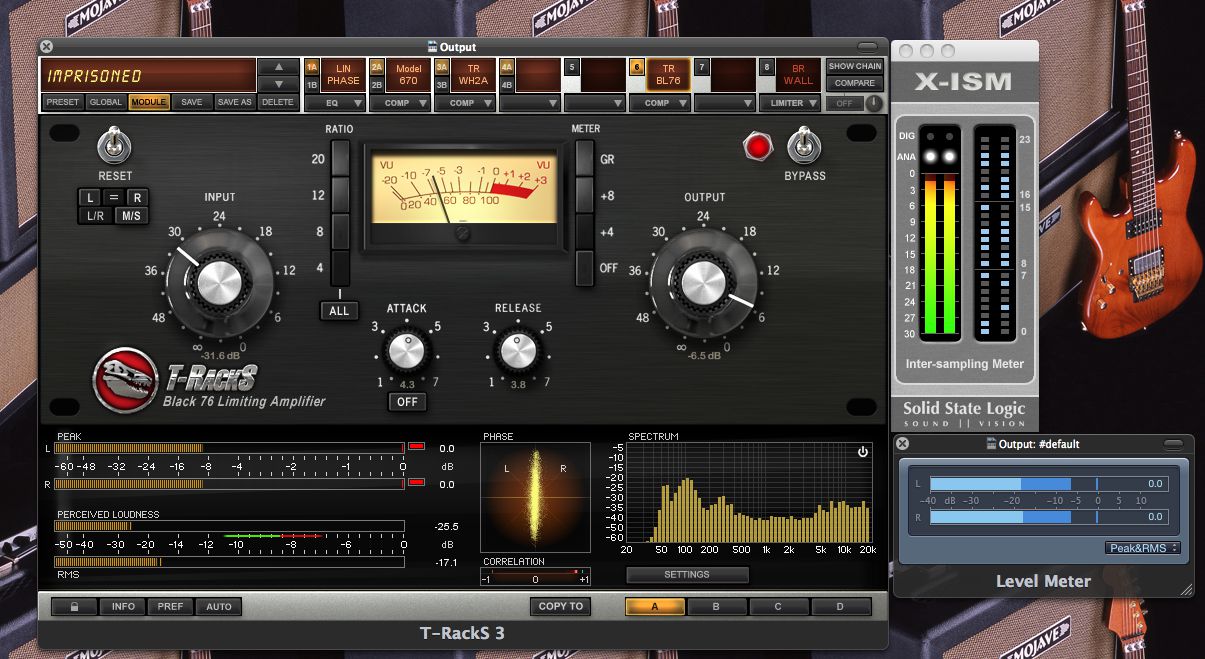 Notice that the DAW meter as well as the metering built into the mastering software itself show no sign of trouble. There is of course a different result when looking at the intersample peak meter: in this case, just the Analog peaks lit up, enough to show that it's going to exceed the analog maximum at reconstruction. To prevent this, you should reduce your output in intervals of .1 until the intersample peaks are no longer occurring and there are no overage lights kicking in.

In this next screen shot, the result was a -0.7 dBfs output which proved to be just enough of a back-off to prevent the intersampling peaks that occurred with the 0 dBfs output.  You can hear the accompanying audio demo at the reduced output and judge for yourself. Is there a difference that is noticeable? Is the sound better or no different? It is very hard to discern. 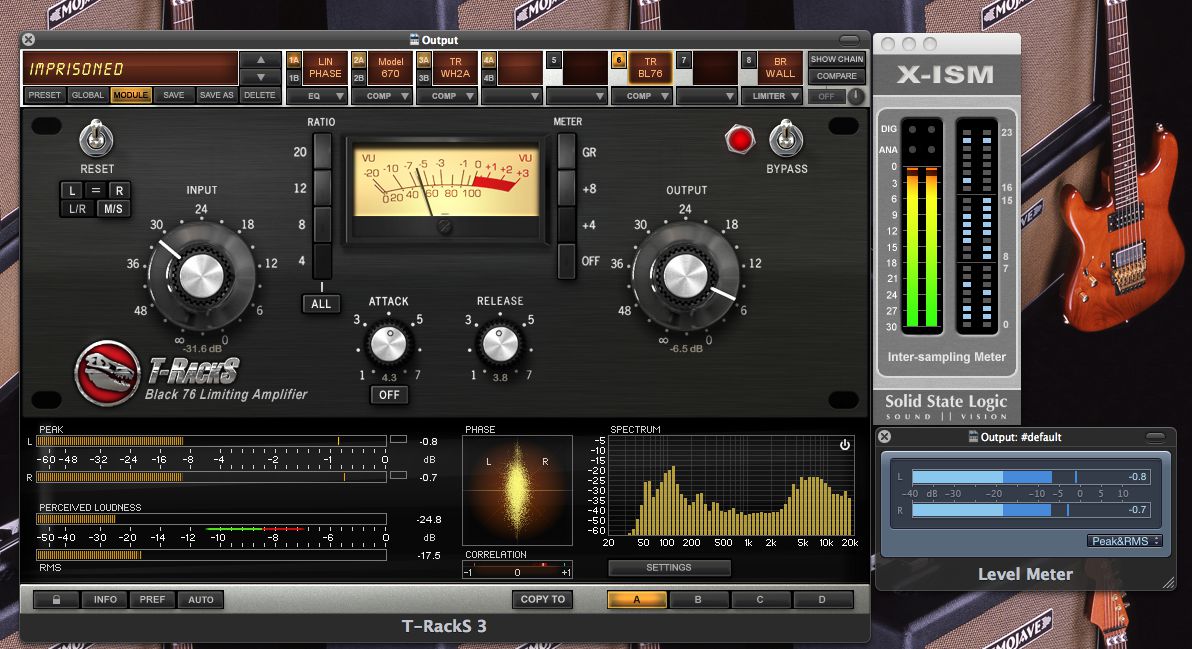 So, while you cannot guarantee that the listener will hear exactly as you do, you can know for sure they will not have intersample peaks causing a potential distortion nightmare.

In conclusion, the best course to take is to use caution and not go with the loudest numbers but with the highest output level that will not cause intersample peak issues during playback. Your mix will be just as good and loud and you won't be the victim of distortion caused by playback systems. This is a must if you intend to send out your mix for commercial use.

A word of caution: the SSL X-ISM meter is very CPU-intensive because it up converts your audio just like the DAC converters being used at the listener's end. This is necessary to calculate the interpolation that is used to plot the smoothing out of the analog signal and therefore, the resulting audio. I would advise this meter be used at the final mastering phase and only if you have disabled other CPU-hungry plugins so as not to overload your system.

The SSL meter itself also offers you some very good benefits aside form the DAC simulation and ISP (intersample peak readings). There is a digital clip meter and a Bit meter as well. The Bit meter is interesting in that it also provides a useful indicator as to how many bits are actually being used for the processing of your audio. It works by taking the floating digital audio (hence the terms 24- and 32-bit float) and converts it to a fixed 24-bit system. This shows you a representation of the number of bits used and what the converters will see at the other end when the digital signal is converted back to analog. If you are supposed to be getting 24-bit but are not seeing it displayed, then you'll know your settings are probably not as you intended.

You can download the free SSL X-ISM meter here and learn more about mastering in Logic with SteveH's Logic Mastering Toolbox.

Gary Hiebner
Thanks Victor for the very helpful mastering tip.
Hamish H
Thanks very much Victor! An extremely useful article.

"Even MP3 uploads need consideration since they too have their own challenges, one of which is they very often bounce out hot and are played back off the web hot."

Can you just clarify what you mean by 'hot'?

Mojave
Thanks much guys, Hamish, the term Hot is always at or over 0 db in my book. Higher output then it started. MP3s go up say at -.1 but come down +.4