Why Some Compressors Don't Need Lots Of Controls

Compression is a staple of the production process, but why do compressors offer such a variety of controls? Joe Albano explains why sometimes less is more.

When choosing from the many brands and models of compressors—both hardware and software—one of the first things any intrepid user is likely to notice is the significant difference in layouts among the many options out there. Some models have a bare minimum of controls—just a couple of knobs to get the job done; others are chock-full of controls and bells & whistles. Naturally this raises some questions—why do some compressors apparently need so many controls and others don’t; are you losing out when using the simpler models? Let’s take a brief look at the differences, as well as the pros and cons—of full-featured compressors vs minimalist designs.

First off, here’s a brief review of what all those controls found on the more full-featured designs do. 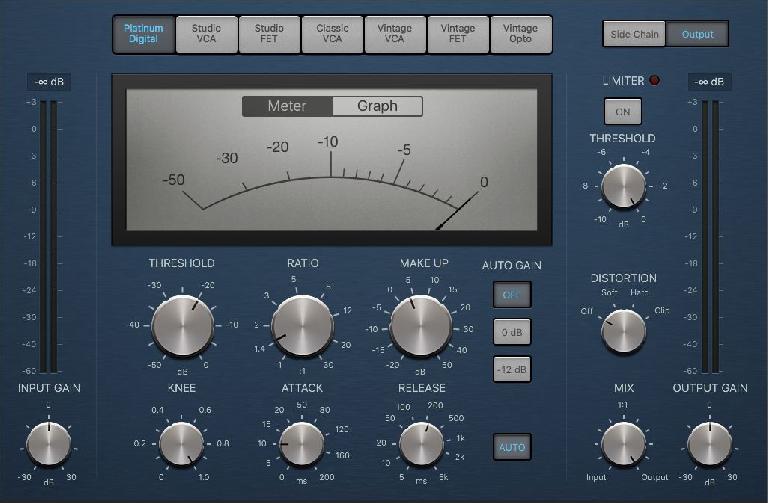 The basic complement of controls for any compressor consists of Threshold, Ratio, Attack, Release, and Makeup Gain. Threshold and Ratio determine when the compressor will kick into action and how strong that action will be; Attack and Release govern the specific response of the unit, and have a big effect on how the compression will affect the envelope and character of the audio signal. Makeup Gain is a utilitarian setting, intended to compensate overall signal level for any loss from the compressor’s gain reduction.

More specifically, a Threshold control sets the level at which compression—automatic gain reduction—begins: signals below that level are unaffected and unchanged; signals above Threshold are reduced in gain by an amount based on the current Ratio setting. Ratio refers to the ratio between the original signal level and the gain-reduced (compressed) signal level, for signals above the Threshold. So, for example, a 4:1 Ratio—a typical ratio for vocal compression—means that for every 4 dB the signal exceeds Threshold, the compressor will reduce gain sufficiently to allow the signal to exceed Threshold by only 1 dB. Naturally, higher Ratios result in larger amounts of gain reduction.

Sometimes the Threshold level is absolute, but other times the gain reduction may begin at a slightly lower Ratio at a level slightly lower than the actual Threshold, and increase gradually until the signal exceeds Threshold by a bit before the full Ratio and amount of gain reduction is achieved. This behavior can make large amounts of compression sound smoother—if it’s under user control, a Knee control determines the compressor’s response in this regard. The behavior described above is referred to as a Soft Knee response.

Whenever the signal crosses the Threshold, the Attack control determines how long it takes for the appropriate amount of gain reduction to kick in; typical settings range from very fast—1 or 2 milliseconds or less—to somewhat slower—around 10 milliseconds or more. Slower settings let more transient energy through before the gain reduction kicks in, while fast settings can clamp down more aggressively, sometimes softening transients.

When the above-Threshold signal being compressed drops back down below Threshold, Release determines how quickly the compressor stops applying gain reduction, and lets the signal pull back up to its original level. A slower release—a few hundred milliseconds to as much as several seconds—can make for a more natural, less processed sound, while a faster release—40 or 50 milliseconds or so—can cause the tails ends of notes to noticeably pull up in level, an effect sometimes referred to as “pumping”. While pumping is considered a flaw when transparent compression is desired, as a deliberate effect it can bring up the “boom” in drums and percussive notes, for a dramatic drum sound—some classic compressors are known for this.

All of these controls work in tandem when shaping the sound and response of the compression, and it can be a bit daunting to get just the right settings, especially for compression newbies. That operational complexity can make those simple minimalist compressor designs seem even more appealing.

So when you see a compressor with only a couple of knobs, this naturally raises a couple of questions: which controls are there and which are missing; and how does the compressor behave in relation to the aspects you can’t manually control?

Well, in most cases the controls that always need to be there—in some form or another—relate to the Threshold and Makeup Gain, which are needed to match the compressor’s action to different audio signals at different levels. However, that doesn’t mean there’ll always be a Threshold control that changes the Threshold level directly. Many vintage compressors—even more full-featured ones—lack a Threshold knob, instead providing an Input level control, which basically serves the same function: instead of setting the Threshold level to match the incoming signal level, the incoming signal level is raised to meet a fixed Threshold level. In that case the Gain control is often used to reduce the level of the boosted compressed signal, rather than to provide makeup gain.

The classic example of this kind of minimalist design is the Teletronix LA-2A, which has only two knobs—Peak Reduction (input/threshold) and output Gain.

In the case of the LA-2A, the simple design is due to the circuitry that provides threshold detection and gain reduction—an optical circuit. In optical—or opto—compressors the signal is sent to an internal light which glows brighter with increasing gain; a photoelectric cell reacts to the light, causing gain reduction to occur in proportion to brightness. The response of this kind of circuit is dependent on the circuit itself, which determines the effective ratio—the LA-2A offers overall options of approximately 3:1 and 10:1—and governs the attack and release times. Generally, this means a slower attack and longer, multi-stage release, for a subtle, transparent compression response. Virtual models that emulate this are typically designed to also provide this characteristic response.

Of course, the downside of a more automatic response like this is that the compressor may not be as suitable for all tasks—someone looking for fast aggressive compression for dramatic pumping drums will not find nirvana with the LA-2A or its optical brethren. But the upside is that when a large amount of transparent compression is needed, an LA-2A or similar design will not only provide it, but will be dead-easy to use, making it virtually impossible to dial up a poor choice of settings and cause unwanted pumping or obvious processing.

Of course, simple compression designs are not always optical and not always slow, smooth compressors; for example, another classic model, the dbx 160, also features a more minimal control set—Threshold, Compression (Ratio), and Output Gain—leaving Attack and Release to be controlled automatically by the internal circuitry, a custom RMS detector and VCA circuit designed by the company’s founder.

The dbx 160 is a fast, more modern VCA design, good for clamping down on transients—the automatic aspects of the design help it achieve smooth response while compressing more aggressively.

And that’s a big aspect of the appeal of minimalist compressor designs; not only are they easy to operate—in some cases, short of gross engineering negligence it’s almost impossible to get a bad sound out of them—but they may provide smoother, more consistent compression, whether it’s for subtle transparent gain reduction or more aggressive clamping down.

But of course, as appealing as minimalist compressors can be, sometimes you do need a full set of controls to be able to dial up the exact response required by a difficult audio signal. Couple that with the fact that many simpler compressor designs might “specialize” in one type of response—slow and transparent or fast and aggressive—that’s why it’s almost always necessary to have a couple of different compressors at hand.

Fortunately, many modern compressors and even plug-ins that emulate simple vintage models incorporate both the desirable automatic program-dependent response of simpler designs with additional user controls for those situations where just a bit more control may be needed. In those cases, it may be possible to enjoy both the smoothness and ease of use of the classic design—with appropriate neutral settings—and still be able to fine-tune that response with a few extra well-chosen tweaks, courtesy of the full feature set—the best of both worlds.

Learn more about dynamics and compression in the Ask.Audio Academy: https://ask.audio/academy?nleloc=category/audio/topic/mixing