Why & How To View Multiple Controller Lanes in Logic Pro X

Language
When applying automation or MIDI draw in Logic Pro X you might want to control multiple parameters and therefore see them all simultaneously. Logic X gives you three ways to do this. Here they are.

When you start digging deeper into Logic’s MIDI capabilities, you’ll want to find out how to view multiple controller lanes in it simultaneously. I’ve found three methods that work pretty well at doing this. You can use a key command to jump between the different controller lanes, alternatively you can use the Step Editor to view multiple controller lanes. Or if you want to be able to view your CC lanes in the Arrange area then you can use the region based automation feature in Logic. Let’s take a look at how to use these methods and you’ll see which one fits your way or working with MIDI.

After recording or programming in a MIDI region, double-click the region to open it in the Piano Roll Editor. Then if you click on the Show Automation/MIDI Draw button it brings up a controller lane, and by default this will usually show the Velocity data for that MIDI performance. But what if you want to see another controller lane? 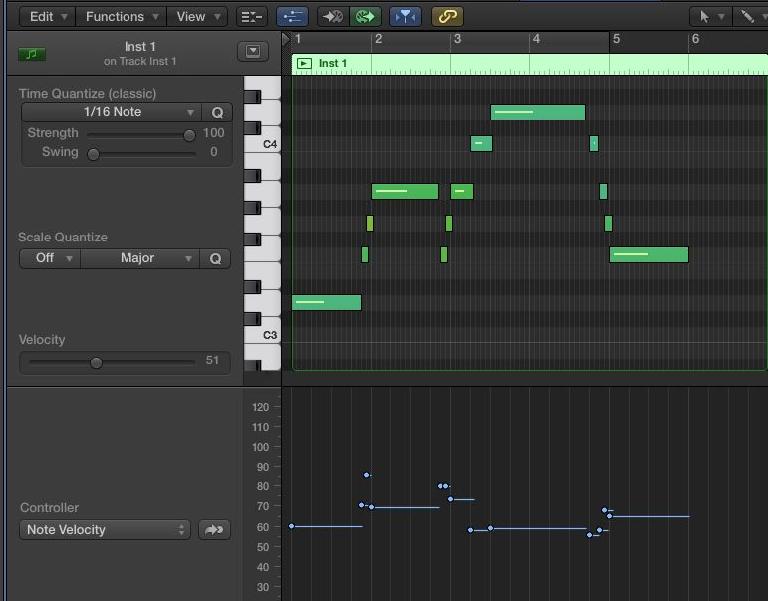 Then what you can do is go over to the left on the MIDI Draw lane, and choose another controller lane to view. This is a bit of a hack to do, but there is a better way. 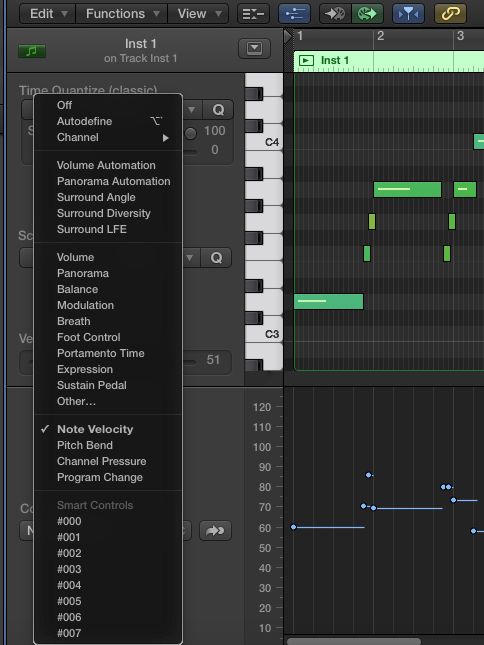 Let’s say you recorded in a MIDI part with differing velocities, and you have also recorded in the movements of the modulation wheel. So your MIDI region will now contain edited data for two controller lanes: the velocity data and the modulation data. You’ll notice on your region in the Arrange area it will show some CC messages on the region, and this is the newly recorded modulation data on the region. Now, how can I easy view the different lanes in the Piano Editor window? 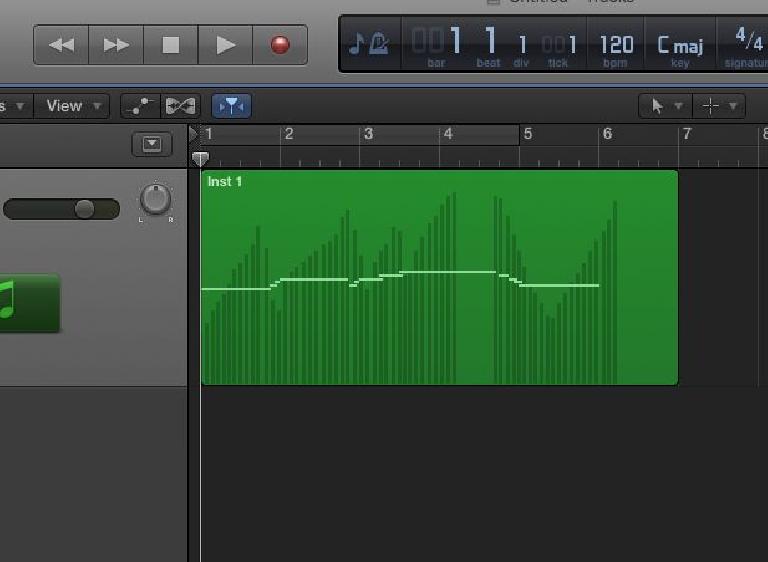 A good way is to assign a key command so that you can very fast and easily switch between the controller lanes with the data on them. So if you go to the Key Commands Edit window (Logic Pro X > Preferences... > Key Commands > Edit, or use the shortcut Option-K). 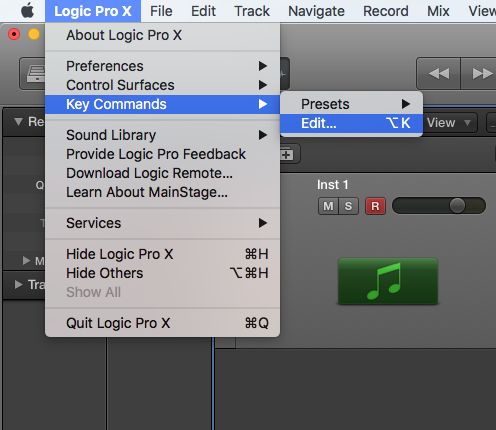 You’ll want to look for MIDI Draw: Autodefine. I just typed autodefine in the search bar and it found the command for me. I’ve assigned this to its own unique key command that doesn’t clash with any other key commands. 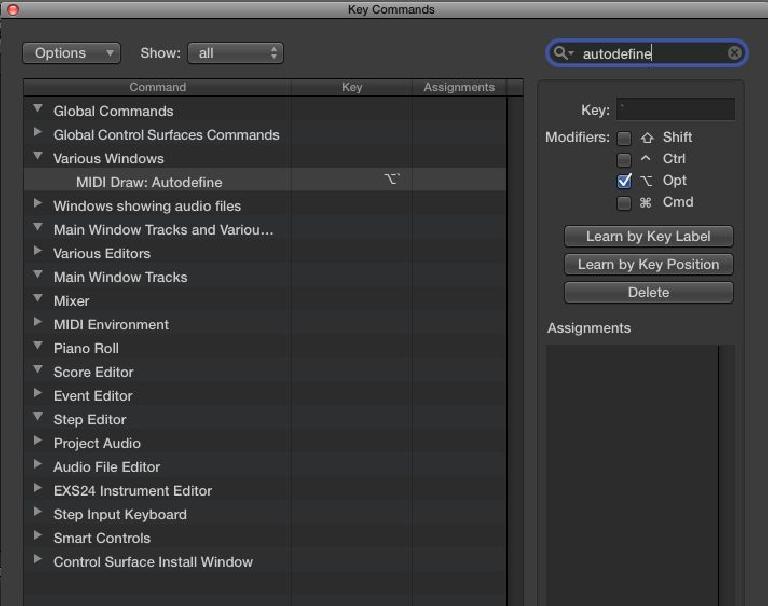 If you choose a key command that is already taken, a warning box will come up showing you what the key command is assigned to, and if you want to overwrite it.

Now if I go to the Piano Roll Editor and use this newly created shortcut, it’ll cycle through the edited controller lanes. So it’ll first show the velocity lane, then if I use the shortcut again it’ll show the Modulation lane, then if I hit the key command again it’ll hide the MIDI Draw view. 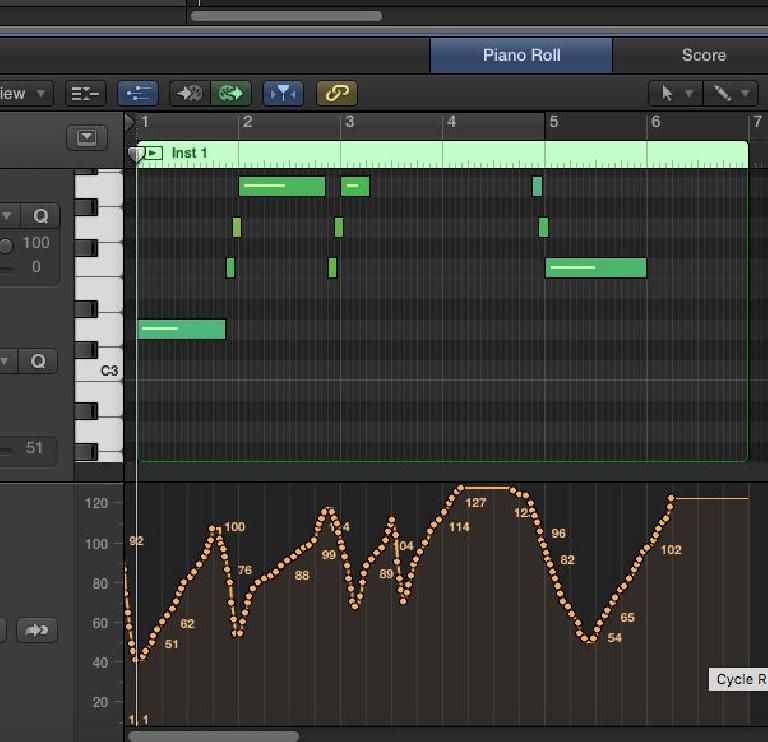 So it’ll cycle through it this way. But it’s very quick and easy to use, and you’ll find that you can quite nicely jump between multiple controller lanes this way. Just make sure you are in the Piano Roll editor when you do this or else nothing will happen.

Another way to view multiple controller lanes or CC data is to use the Step Editor window. You can view it by selecting a target MIDI region first and then going to the Window menu and then choosing the Step Editor or using the shortcut Command-5. When this opens up, it’ll probably show the Modulation lane, and then a couple of other lanes probably with different MIDI notes. 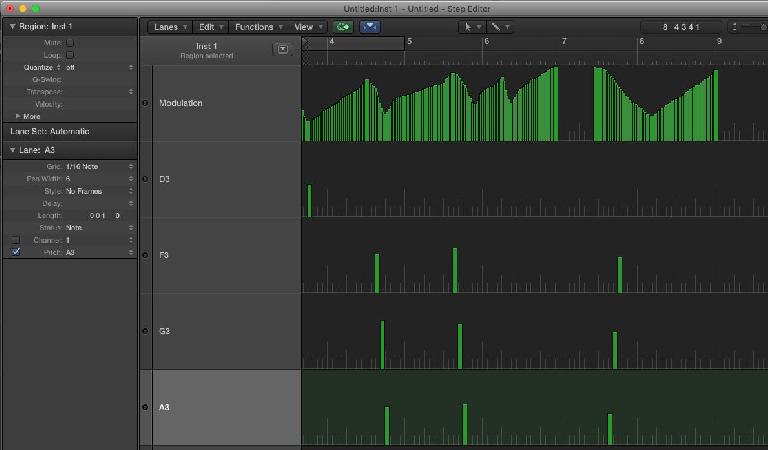 You need to do a bit of tweaking to get this to view the CC lanes you want. To do this first select one of the lanes. Then on the left under status you can select what type of lane you want to show. Choose Control to show a controller lane. 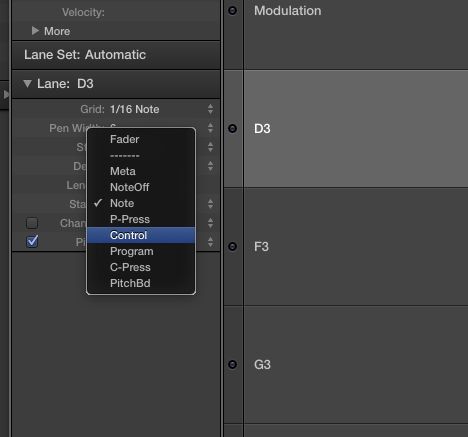 Then under the Number section choose the right CC lane. I want to show my Expression lane, so I’ll choose it here. It’s CC11. 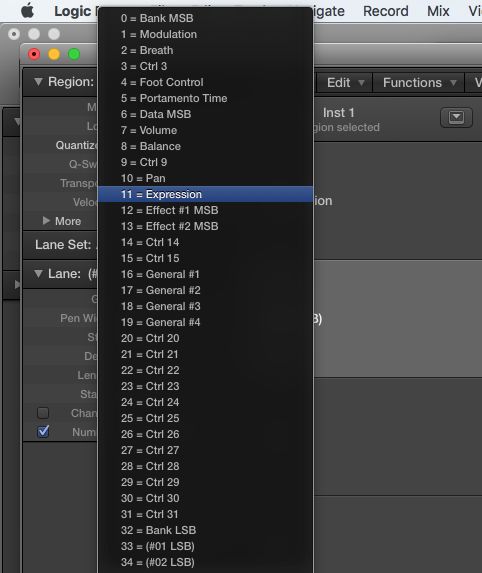 The beauty of the Step Editor is that you can view a big selection of CC Lanes here. Plus, you can open more than one Step Editor at Time and save them to different screensets. So you can have one Step Editor window showing you your Modulation and another maybe showing your expression data. So it’s quite customizable. 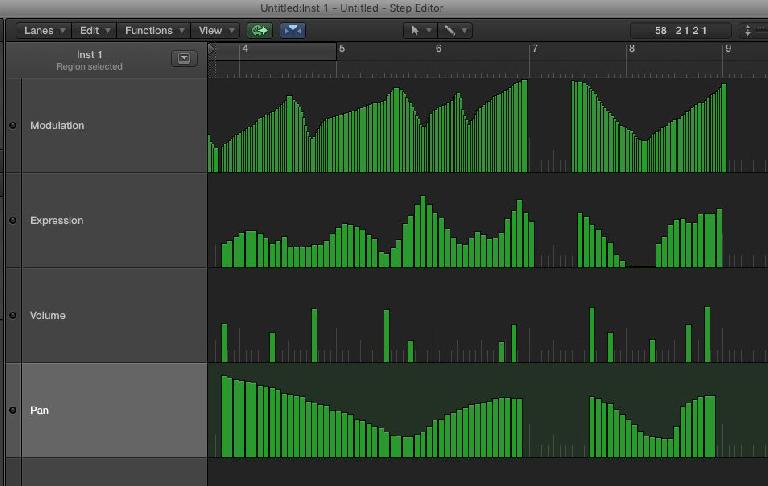 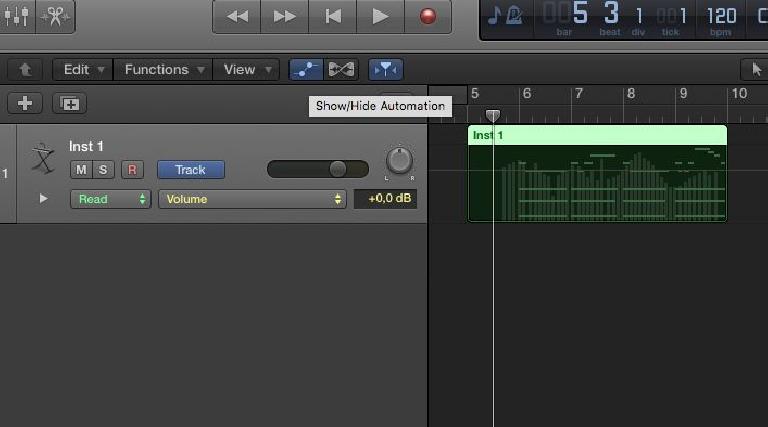 By default the track will be showing the Track Automation. There will be a blue highlighted button that says Track, showing that its in track automation. If you click this, it will switch it over to Region-based automation. 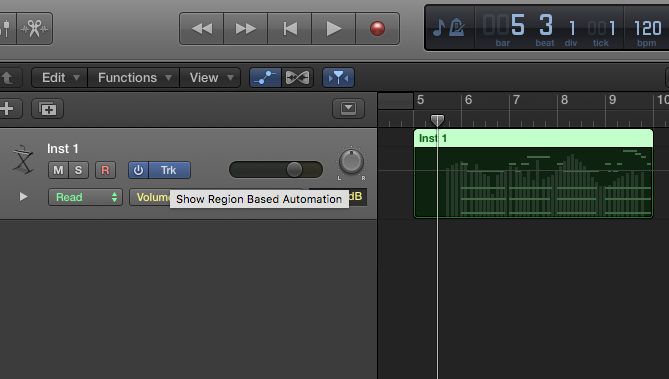 Now under this on the drop-down menu I can choose what CC data to show, for example Modulation. 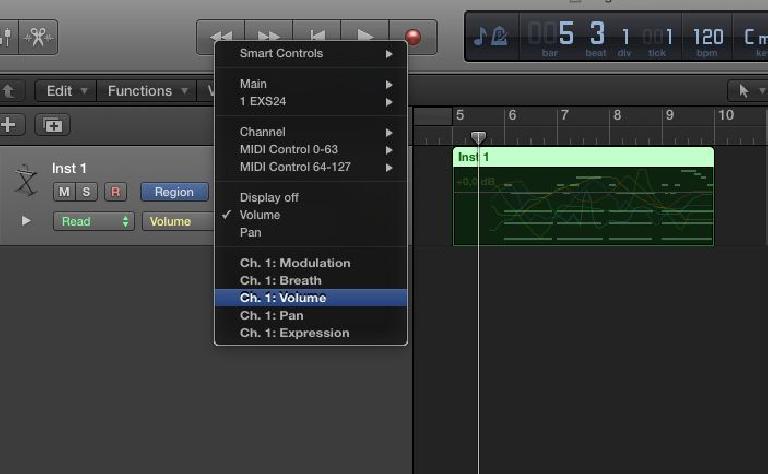 Or I can just click on the arrow and that will drop down to show all the CC lanes with data on them. 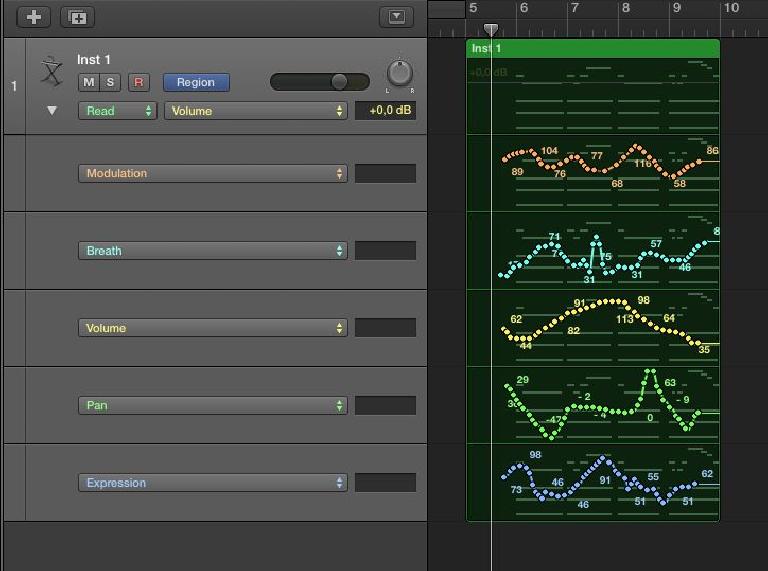 I can also choose which CC Lane to show. For example, if I haven’t already recorded in CC data to a channel it won’t show it. So I’ll have to select the channel and then start recording data to it. 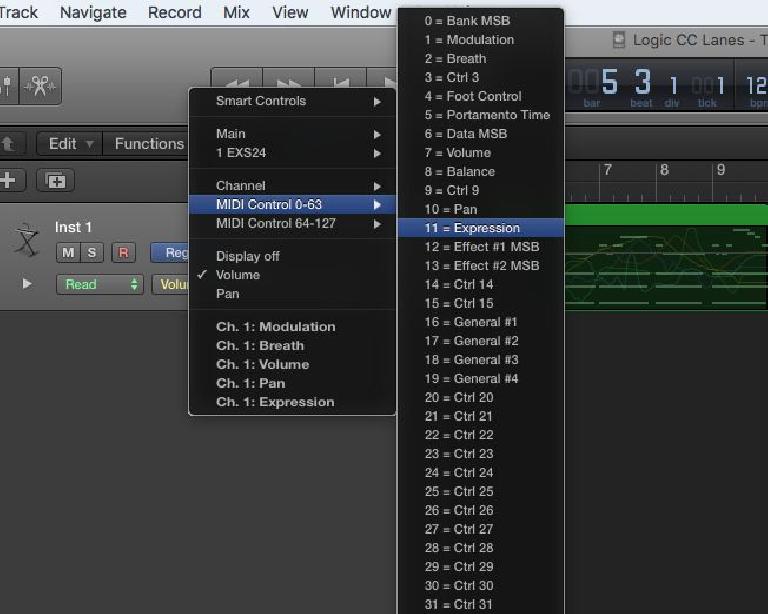 So that’s how you can get around this shortcoming in Logic and view multiple CC Lanes. Either use the MIDI Draw Autodefine key command to cycle through your different CC lanes with data recorded to them, or use the Step Editor window to create CC lanes for the different controller lanes you want to view. Alternatively, you can view your CC lanes in the arrange area with the region based automation. Plus, don’t forget you can save these windows to your screensets so you can quickly open up different Step Editor windows or Arrange windows to view different data.

Ray Brookes
This has been very informative, thank you very much.