What's So Great About The Minimoog?

Language
Since Moog Music reissued the classic Minimoog Model D analog synthesizer, there's been a lot of talk about this particular synth and what makes it unique and great. Joe Albano explores it deeper.

Since the introduction of synthesizers there have been many classic models, but possibly the most famous of all is the Minimoog. This particular model marked a turning point for electronic synthesis: its introduction to the world at large, especially the pop music industry. The Minimoog, with its relatively simple design and distinctive sound quality is one of the most enduring synths of all time, inspiring host of imitators. It’s still so popular and in-demand that vintage units command high prices, numerous virtual models emulate it, and Moog Music has even released a faithful hardware reissue of the classic model - the Minimoog D.

But with all the modern hardware and software synths out there which are capable of creating some amazing sounds, newly-minted synthesists and budding EDM producers may look at the Minimoog’s relatively basic layout and traditional analog sound and ask “so what’s so special about the Minimoog?”. Well, it’s earned its exalted status among synthophiles for a number of reasons, including its history, design, and of course its distinctive analog sound. Let’s take a brief look at this classic synth and see what it’s all about.

Prior to the Minimoog’s introduction in 1971, electronic synthesizers (analog of course at that time) were not only monophonic but also large, complex affairs that tended to resemble an old fashioned telephone switchboard gone haywire. Modular synths were made up of separate electronic modules that had to be interconnected by the user, with a tangle of cables that had to be repatched every time the sound was changed. Collections of modules were built into large cumbersome cases, which was great in the studio but not so much fun for less well-heeled touring musicians (without a team of roadies and synth techs to cart around and manage such beasts) who may have wanted to incorporate the then-new analog synth sounds into their live performances.

Bob Moog set out to design and build a portable synthesizer with an attached keyboard and a pre-wired design that would eliminate the need for patch chords; the design he settled on became the template for a whole industry of portable performance-oriented synths. After several early revisions, the Minimoog Model D was released and it took the music world by storm. Its diminutive size and convenient collapsing control panel made it eminently portable; its classy wood panels helped it fit right in with the other classic (electro-mechanical) keyboards of the era, and those iconic red and blue rocker switches gave it a sense of style. But it also delivered the goods in terms of electronics and layout - the Minimoog D packed a lot of sound and flexibility into a fairly simple and straightforward design. Both the pre-wired layout and the particular character of the components used for sound creation and modification gave it a rich, fat tone, and that’s the real key to its enduring popularity.

The Minimoog defined the classic hardwired analog synth layout. Its monophonic sound engine incorporates three Oscillators (two are which are fine-tunable, one of the key components of the rich Minimoog sound), and a white or pink Noise Generator. The oscillators provide all the now-standard waveshapes - sine, triangle sawtooth plus a triangle/sawtooth hybrid (osc 1, 2) and reverse sawtooth (osc 3), and three pulse waves: square, wide, and narrow pulses. In the original Minimoog D, the third oscillator did double duty as the only LFO, but one of the few changes made to the new reissue is the addition of a dedicated LFO and a few extra related controls. All of the sound sources are run through a simple mixer section, along with an optional external audio source.

The audio path then feeds into the famous Minimoog filter section (see below for a more technical description). Standard Cutoff and Resonance (labelled Emphasis here) knobs set the initial values, and the Contour knob determines how much the Filter EG will affect the manually-set Cutoff which is typically labelled Depth or Amount on modern synths. Cutoff can also be affected by keyboard tracking.

The audio path finishes in the Output (amplifier) section, with separate volume knobs for main output and headphone output.

Of course, the Oscillators, Filter, and amp are all voltage controlled (VCO, VCF, VCA). You can enable various voltage control sources for the Oscillator section, and the Filter Cutoff (VCF) and amplifier (VCA—Output) are controlled by the Filter and Loudness Contours (Envelope Generators). Those EGs are a bit simpler than modern EGs, with only Attack, Decay and Sustain knobs; the Decay control does double duty as Release when the Decay switch to the left of the keyboard is engaged.

At the far left of the control panel is the Controller section. Here you can set Glide (portamento) time when that feature is enabled below, and determine what the Modulation source will be for the Oscillator section. The Minimoog D reissue adds a couple of extra switches, accommodating the newly-added dedicated LFO along with a Rate & waveshape control for it in the panel below. 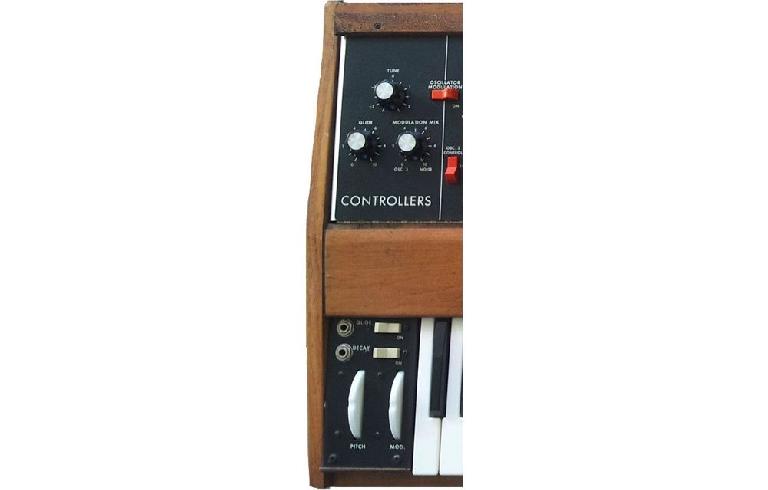 Innovations like the now-ubiquitous pitch bend and modwheel helped define synth playing styles. And besides the external audio input, the Minimoog also has a few additional jacks on the top/rear panel, allowing for a little bit of patching flexibility to augment its hardwired design, but even if you just stick to the front panel controls there’s no shortage of tones you can get from it, all with of that classic Minimoog “sound”.

One of the things that distinguishes the Minimoog from other, similar designs is the collection of analog components at its heart, particularly its oscillators and filter. All analog synths include more or less the same basic oscillator waveshapes, but in those early days, the components were often less stable. Vintage oscillator circuits were notorious for drifting out of tune, and different circuits tended to produce their own distinctive distortions that colored the basic sound, easily visible on a scope trace. But those flaws were also one key to the Minimoog’s particular tonal signature. Software emulations often go to great lengths to mimic those specific “flaws”.

That said, if there is one aspect of the design that is most responsible for the legendary fat Minimoog sound, it’s the Moog “ladder” filter design utilized in the Model D’s resonant lowpass filter circuit. This transistor-based circuit was patented by Bob Moog in the late 60’s, and used in earlier Moog Modular synths, where its 24db/octave slope and rich edge when overdriven helped define the “Moog sound”. This filter proved so popular that Moog Music also released it as a standalone, part of the Moogerfooger series of fx boxes, that more easily enabled its use on other, non-synth signals. The Minimoog did allow for external audio to be run through the filter section. The filter’s voltage-controlled 4-pole design and optionally self-oscillating resonance are the secret ingredient in all those fat, juicy Minimoog bass sounds, arguably the most popular application for this classic synth. The Minimoog has long since taken its rightful place alongside the other classic keyboards of the analog era, but the fact that its popularity is still great enough to sustain a market for not only numerous software emulations, but a hardware reissue (originally conceived as a limited run, but then put into full production) is a tribute to the timelessness of both its simple design and unique sound. The Minimoog is here to stay - long live the king!

Watch & Learn all the synthesis capabilities of the Moog Minimoog Model D in the AskAudio Academy.

You might also be interested in our Adrian Utley (Portishead) Synth Stories interview detailing his love of the Moog Minimoog, and how he used it on their 2016 cover of ABBA's SOS.

"Joe is a musician, engineer, and producer in NYC. Over the years, as a small studio operator and freelance engineer, he's made recordings of all types from music & album production to v/o & post. He's also taught all aspects of recording and music technology at several NY audio schools, and has been writing articles for Recording magaz..." Read More

AC
I don't find anything about the Minimoog Model D sound to be so amazing, given it's reverence and history. I mean, sure it has it's history in a time when there wasn't much competition. Much like Jack Dempsey was a great boxer in his day. Compared to what we have now, the Model D is a simple single-voiced analog synth with no patch memory that makes some simple sounds. It won't win you any awards on sound alone. It's just a synth. Any plugin can run circles around it, as far as capabilities. The sound, I am not in love with. I guess you have to have a taste for these types of synths, though, I find it hard to imagine what modern music would benefit much from this synth.