What is Convolution Reverb?

Convolution reverb plug-ins have become the go-to reverb type in recent years. But what exactly is it? How does it work? And why does it produce realistic spaces? Richard Lainhart explains all.

Convolution reverb is one of the more powerful tools in the sounds designer's arsenal, but one which many desktop musicians find mysterious and confusing, or are simply unaware of. Let's take a look at how convolution reverb works and offer some suggestions for using convolution as a creative sound design tool.

A Brief History of Digital Reverbs

Among the first was Waves' TrueVerb, which provided, at last, an excellent-sounding digital reverb in a not-too-painfully priced package. But like all the hardware reverbs that proceeded it, it was an algorithmic system - it used software formulae, or algorithms, to simulate the way real acoustic reverb worked. That's not to say that algorithmic reverbs sound unrealistic - they can be quite realistic. And at any rate, realism isn't always the goal in music and sound production.

But for those who wanted to recreate real acoustic spaces as accurately as possible, algorithmic reverbs didn't quite measure up. It was only with the release of the first convolution reverb software, Audio Ease's Altiverb, in 2001, that those goals were finally realised.

Altiverb stood alone as the only available convolution reverb for several years, but now there are quite a few contenders in the convolution reverb market, including even some open source and freeware versions. Now that computers are powerful enough to support the technology's heavy processing requirements, convolution reverb offers unprecedented accuracy in the reproduction of real acoustic spaces, along with the creation of all types of artificial and virtual spaces, as well as some creative sound design possibilities previously unavailable.

But having said all that, what exactly is convolution reverb?

What Is Convolution Reverb

Basically, a convolution reverb takes an input signal (the sound to be reverberated) and processes it with the sound of an actual or virtual acoustic space to create the illusion that the input was recorded in that space. The sound of the acoustic space is captured in what is called an impulse response (IR), which often starts as a recording of a short, sharp sound, such as the firing of a starter pistol or the bursting of an inflated balloon (the impulse), in the acoustic space in question. As you can imagine, such a sound excites the reverberation (the response) in the space, and so the impulse response (or at least its initial recording) sounds like an explosion followed by the reverb reflections of the space.

The trigger sound is usually a somewhat broadband sound like a shot or balloon pop, because the impulse response recording should capture the widest range of frequencies in the reverb reflections possible for as accurate a recreation as possible. And, of course, for stereo convolution reverbs, you need to capture a stereo recording; for surround reverbs, you need a surround recording.

Once captured, depending on the convolution reverb software in question, the IR recording may need to be processed to remove the original impulse trigger sound and leave just the response, a process called deconvolution. Many convolution reverbs, however, don't require this step.

Once you have the IR for the space as a file, you then load it into the convolution reverb and input your sound to be processed. At that point, the software convolves the two digital audio signals together to create the output. Convolution itself is a mathematical process that has many applications including statistics, image processing, and electrical engineering as well as audio processing. I'm not going to try to explain the actual formula (mainly because I don't totally understand it myself), but you don't need to know what's happening to hear the results. If you like, you can think of convolution as a kind of multiplication of each sample of the input with each sample of the IR, with the result being that the input takes on the sonic characteristics of the space in which the IR was recorded.

Here's the dry input sound - a single hit on a cowbell (you can never have too much cowbell, right?):

To use ImpulseVerb, you apply it to your audio file and in the dialog choose one of the included IRs - helpfully, ImpulseVerb includes pictures of the space in the IR was recorded, in this case a hallway: 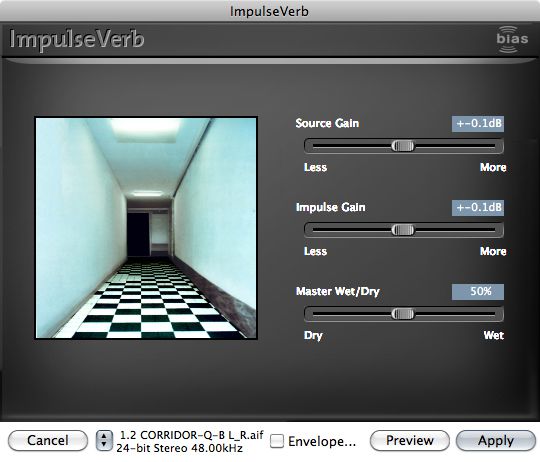 After application, here's the resulting sound:

Here's the same cowbell, but this time, convolved with an IR recorded in Trinity Church in Boston, a much larger space:

As you can hear, the results are quite realistic. In fact, because this IR was recorded in the actual church, the results of the convolution should be indistinguishable from the cowbell recorded live in the church (assuming the same acoustic conditions in each case.)

In fact, that's one of the important uses of convolution reverb - the ability to recreate the sounds of actual spaces remotely. It's used often in film and video production, where you may have dialog or ambient sound recorded on location that needs to be replaced in post-production - a very common scenario. In that case, location recorders and sound effects engineers will frequently record an impulse response at the location, then use that IR later in post to make the replacement dialog or effects sound as if they were recorded live at the location. It's much easier, and usually more accurate, to recreate the ambience of the location that way instead of trying to simulate it with algorithmic reverbs.

As you saw, the controls you have available in ImpulseVerb are pretty basic, and don't really allow you to adjust the frequency response, room size, or reverb time the way you may be used to in algorithmic reverbs. Many convolution reverbs still work this way - the only way you can really modify the reverb is to modify the IR. But more current convolution reverbs do allow for much greater customization of the final reverb, and one of those is Logic's own Space Designer, an advanced convolution reverb: 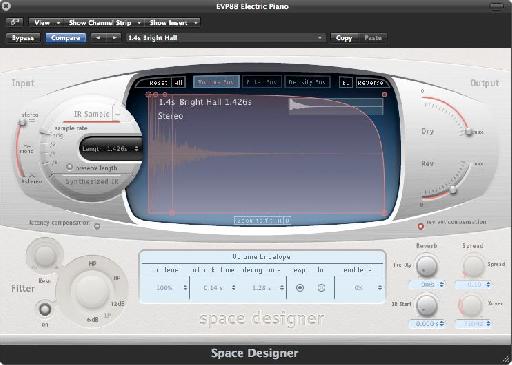 We won't go into the details of Space Designer right now, but as you can see, it's much more tweakable than ImpulseVerb - you can adjust the decay and attack of the IR with the Volume Envelope, filter the resulting reverb with a Filter Envelope (note the bezier handles on the filter shape so you can create smooth envelope curves) and much more. 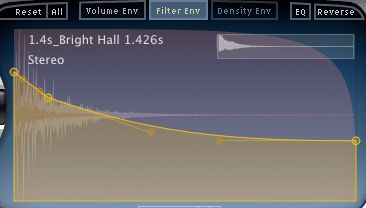 Space Designer is a tweakers paradise.

But what I'd really like to point out here is that Space Designer has the ability to load any uncompressed audio file as an IR, which provides for some powerful and unique sound design possibilities.

For example, here's a short bit of me playing the EVP88 Electric Piano softsynth through a standard room reverb in Space Designer:

And here's an ambient pad played on another synth:

And here's the result of loading in the pad as the IR in Space Designer for the same EP track:

It's a completely different sound and feel, but the results still have elements of both the original track and the pad used for the IR.

Here's a completely different sound - one of those plastic tubes that whistle when twirled overhead:

And what happens when it's used as an IR for the EP track:

As you can hear, a completely different sound, but one which still retains elements of both sources. The possibilities when using non-standard sounds as IR files in Space Designer are literally endless.

Well, I hope that's cleared up some of the mysteries of convolution reverb for you - if you're a Logic user, I encourage you to experiment with Space Designer to see where it leads you. If you have access to another convolution reverb, try some of these ideas there too. And as always, have fun.

Learn more about reverb and other effects processors in the AskAudio Academy here.