What Every Producer Needs To Know About Delay-Based FX

Delay-based effects make up a wider range of processors than you might have thought. Here, Joe Albano explains which ones are included, how they work and how you should be using them.

Delay-based FX are among the most common types of processing, right up there with EQ and compression. There’s no shortage of dedicated FX plug-ins that offer the various specific effects that rely on delaying the audio signal, but pretty much all DAWs also include at least one (or more) general-purpose delay processors that—with a little knowledge about the basics—can be used to dial up all the various delay-based effects, customizing them for the exact sound desired. Here’s a brief primer on the use of delays to generate these classic effects from scratch. 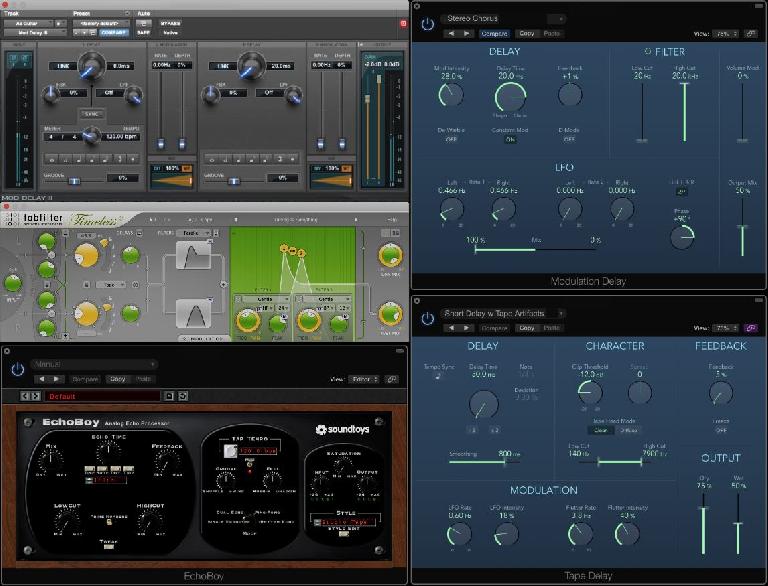 The main effects that utilize delays are Flanging, Chorusing, Doubling, and Echo. Honorable mention goes to Phasing, which doesn’t directly involve dialing up a specific amount of delay, but uses a process that causes the signal to be delayed by a very small degree due to phase shift, for an effect similar to Flanging. All these effects have their basic setup in common—the audio signal is duplicated, and the copy is delayed and mixed back in with the original signal, to the desired degree.

Flanging and Chorusing (and Phasing) involve very short delays—which are not perceived as separate signals—that cause tonal variations from comb-filtering when combined with the original signal; Doubling also uses relatively short delays, but may be set up to sound like a second performance of the same musical part; Echo, of course, is perceived as a repeat of the original audio—anything from a quick repeat to a longer tail of slow repeats.

Let’s go through the details of all these effects, and take a look at how to dial them up from scratch with a general-purpose delay processor..

I’ll start with Flanging because it uses the shortest delay times. For Flanging, Chorusing, and Doubling effects, the delay times are measured in milliseconds (thousandths of a second). A delayed signal following the original with a delay time of less than around 50 milliseconds (ms) will not be perceived as a separate signal—human hearing blends the original and the delay into one sound. Phase differences between the two signals cause comb filtering—peaks and dips in the combined frequency response—which produces an altered tonality for the combined signal. The original and delayed signals are typically blended at around 50% each for the strongest effect, at least as a starting point.

As the LFO cycles, it periodically increases and decreases the manually-set delay time—so if the user sets a delay time of, say, 2 ms, a subtly-applied LFO might vary that delay time between 1 ms and 3 ms. The speed of the periodic sweep is set with the LFO Rate control, and the degree of delay-time variation is set with the LFO Depth control. The specific tonal change caused by the combined delay and original signals is different at different delay times—different frequencies are emphasized/deemphasized by the comb filtering—and when the LFO periodically sweeps the delay time, the result is a periodically shifting tonality. LFO rates determine the speed of the sweep, from slow, for gradual tonal shifting, to faster, for a more shimmering effect. 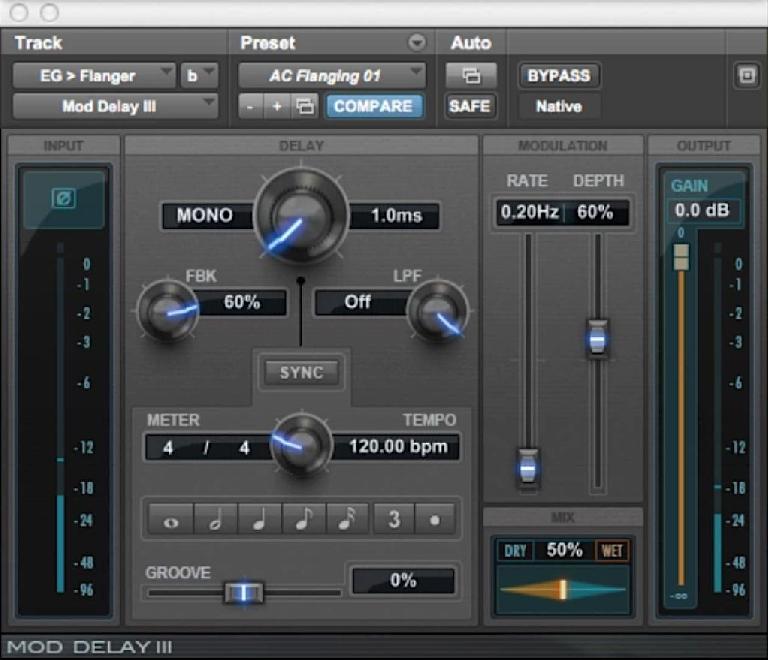 A delay plug-in set up for a classic Flanging effect

Strictly speaking, Phasing is not a delay-based effect, because there’s no dedicated delay line to create the effect—instead, the Phasing effect is generated by running the copy of the main signal through Allpass filters. All filter circuits—even basic digital filters—generate an amount of phase shift, which offsets (slightly delays) the copy against the original signal—Allpass filters create frequency-dependent offsets/delays without directly altering/filtering the frequency response. Once again, the original and delayed signals are heard as one, with comb-filtered tonal variations. But the comb-filtering is different than with Flanging—a different pattern of peaks and dips—and the effect is somewhat softer and smoother.

Multiple pairs of Allpass filters are used, to generate multiple center frequencies for the comb filtering effect. These are called Stages, and the more Stages, the richer the effect—4-12 Stages are common. Once again, an LFO is used to create periodically shifting tonal variations—here, the LFO sweeps the center frequencies of the Allpass filters. The resulting effect is sometimes confused with Flanging, but as I said it’s a generally softer, smoother periodic “whoosh”.

A Phaser with a full set of user controls

Chorusing is created the same way as Flanging, but with slightly longer delay times, typically around 15-25 ms. Feedback is less integral to the effect, and is optional. As with Flanging, the original and delayed signals are typically blended together at around 50% each, more or less. The LFO again sweeps delay time; classic Chorus effects range from slow, deep chorusing to a fast, shimmering effect—faster LFO Rates usually require lower LFO Depth settings for a smooth effect (in general, excessive LFO Depth may result in an undesirable quality). 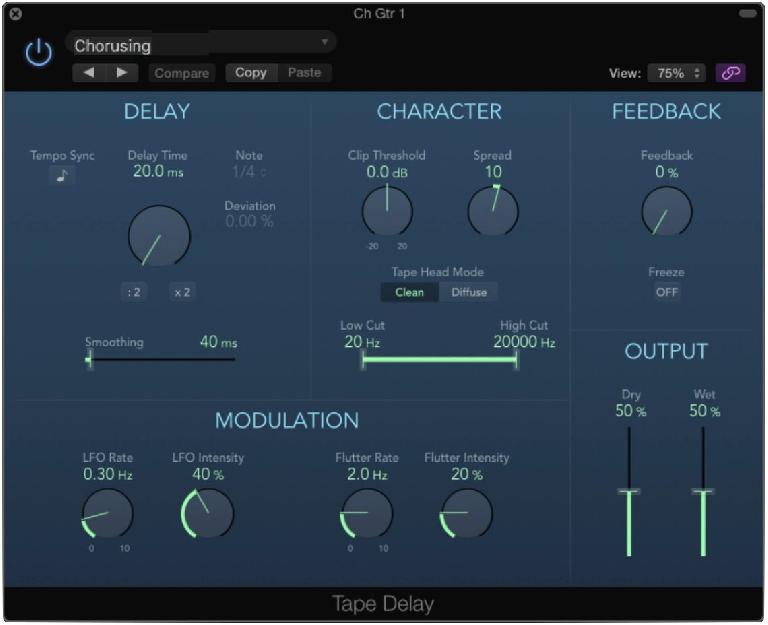 Some chorus devices incorporate multiple delays for a richer, thicker effect, like multiple strings in a string section or voices in a choir—this may be referred to as an Ensemble effect.

Doubling uses the same delay times as Chorusing, but typically without the LFO modulation (or with much less LFO, if it is used subtly). The goal here is not to create the rich shifting effect of Chorusing as much as to suggest the effect of two performers performing the same part. This can range from a little subtle thickening to the clear simulation of two distinct performances, often panned widely to further differentiate them.

Electronic Doubling is often used as an alternative to actually recording a second performance—the effect is tighter and less “organic” than an actual live, performed doubling, but it’s very widely employed in mixing, often on multipe parts. The term ADT—Artificial (or Automatic) Double Tracking—is often used to refer to the Doubling effect. In the early days it was achieved with the use of a second tape machine—Abbey Road studio is famous for its classic ADT effect, which also utilized a manually-controlled varispeed device that added some very subtle “human” variation to the delay time, making it a little less electronic—a little more natural (this effect might be simulated with a random LFO shape, if available).

Echo is, of course, a repeat (or multiple repeats) of the audio signal. A nice Echo can add a pleasant sense of depth without muddying up the part too much, especially when mixed into the arrangement. To generate a discrete echo effect, the delay time would be set above 50 ms, typically around 80-100 ms, with the classic “Slap Echo” effect at around 150 ms or so—longer delay times can be used for more dramatic effect. Typically, the echo signal would be set a little lower in level than the original signal, at least when more natural echo effects are desired.

The echoes can be set to occur freely, or the delay time can be set to create echoes that are in time with the beat. Back in the day, (with outboard FX boxes), the engineer had to do a little math to calculate the delay time that would correspond to echoes at various note values for a particular song Tempo, but nowadays delay plug-ins usually include a Sync option, that ties delay time settings to the beat.

Naturally, Feedback is used to create repeating echo effects, again, either free or at Tempo. Many delay plug-ins may include a lowpass filter in the delay line, that can be used to make repeating echoes get softer/duller as they die away, more closely emulating the warm quality of classic analog/tape delay units.

Besides traditional echo effects, longer delay times can be used to create musical rhythms. Syncing delay times to session Tempo, and dialing up one or more delay taps at different note values, interesting rhythmic figures can be generated from simple parts (as widely employed by U2 guitarist The Edge). Some more advanced delay processors even let the user set the individual timing and parameters of multiple delay taps, for the ultimate in customizable delay effects. 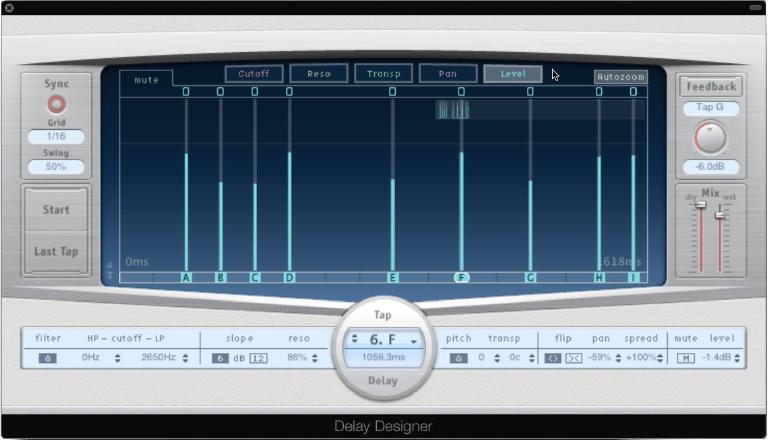 It’s simple to set up just about any delay-based effect from any general-purpose delay processor, once you’re familiar with the different delay times required and the contributions of the various controls. Rolling your own delay FX can sometimes make for customized setups that work better in a particular song, and lead to more interesting effects than plug-ins that provide only preset delay effects.

Check out the Ask.Audio Academy for hundreds of video courses on every aspect of music-making and production: https://ask.audio/academy?nleloc=new-releases