What Every Modern Producer Can Learn From Mozart

Language
Often, when society encounters the work of an amazing artist or producer, the word talent gets whipped out quicker than the Amen break at a drum '˜n bass festival. But what is talent really?Â
LEARN MUSIC PRODUCTION SKILLS IN THE ACADEMY HERE

Have you ever wondered what music talent is? Are some of us just lucky enough to hit some kind of genetic musical jackpot? Well it does seem that way, but there is one factor that ties the greatest of the great with the humblest of beginners.

So, what exactly can every modern producer learn from Mozart?

It takes time to be good at something

Herbert A. Simon, a psychologist at Carnegie Mellon University, determined that on average it takes ten years for anybody to acquire enough skills to fully master their particular field[1]. In his bestseller The Outliers, Malcolm Gladwell shone a fresh light on the idea and the so called ten-thousand hour rule became part of the modern mythos of acquiring skills.

Although there are many studies that have observed similar figures for skills acquisition[2], further reading (and something we get into later in the article) shows this is not exactly the case. Practice in and of itself is not enough, rather spacing out and varying your practice seems to do the trick—as opposed to single minded focus on one outcome[3].

Although not connected to this article, we thought you might like to listen to a few of Mozart's most popular pieces while reading this article:

However you slice the pie though, you still have to practice

For a lucky few, the process of acquiring skills is an unconscious and (seemingly) effortless process, but many mistake this acquisition for talent.

While a rare few seem to be born with innate abilities far beyond those of us mere mortals—Mozart composing music by age 5, Bobby Fischer Chess Master at age 15—what is often overlooked in the case of the lesser pantheon of “Talented People”, a.k.a. the rest of us, is all the blood, sweat and tears that lie behind gaining, maintaining and honing those skills.

Have a look at those figures again, although his first music was composed at an early age (put to paper by his father when Mozart was five), using his opera Mitridate, re di Ponto (composed when he was 14) as an example of his first “significant” output and success as a composer, Mozart’s significant works only really emerge about 10 years later. He composed another two operas in the following two years—Ascanio in Alba (1771) and Lucio Silla (1772)—before his appointment to the Salzburg Court in 1773.

Mozart was a true, tried and tested touring musician before he turned 17. Leading up to this he had been traveling and performing (and composing) for ten years on the road in gruelling and life threatening conditions[4]. In due course he interacted with a slew of accomplished and established musicians and composers and even committed one of the first cases of music piracy when transcribing, from memory, Gregorio Allegri’s Miserere[6], a closely guarded “property” of the Vatican. So this interval of hard work is often overlooked when the genius of Mozart is contemplated. Indeed it wasn’t until 1773 in the Salzburg court that Mozart wrote the music that most of us know him for today.

So what does this mean?

Mozart was, by all accounts, an insanely gifted prodigy—so much so that when performing at age 8 in London his age was called into question and the subject of an inquiry submitted to the Royal Society in 1769 by lawyer and natural scientist Daines Barrington[5]—but one must not forget he was also one of the first “boy bands” of our civilization; heavily marketed and carefully managed by his father[5] (something that was to rub off on him inevitably[7]) and subject to long hours of study, practice and public performance.

In other words Mozart practiced and performed—a lot...! 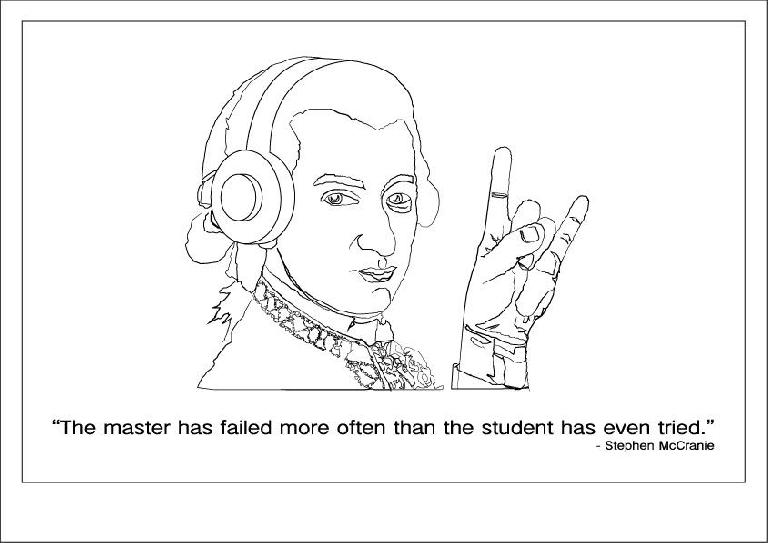 Mozart practiced and performed a lot!

Speaking of boy bands, before the world at large had ever heard of them, The Beatles had already racked up an inordinate amount of time on stage—4 hours a night, seven days a week—playing songs for twenty minutes at a time. Between August and October 1960 alone, they played 28 hours or more per week on stage[8]. As well as playing alongside many other club bands, they spent most of that time on stage entertaining raucous German crowds and covering a slew of musical genres in the process. John Lennon has overtly quoted this time period as being key to their improvement as musicians[9].

Mozart had kings, noblemen and an overbearing father breathing down his creative neck, he was also able to meet many of the other leading composers of his day. The Beatles had the Germans, shady nightclub owners and fellow bands to push them and inspire them to new levels of proficiency.

In both cases, the rest is history.

Practice is still the only way to get to Carnegie Hall. Even though he was a musical genius, there is ample evidence to show that Mozart was no different from the rest of us when it came to plain old practice, by rote hours at the keyboard, and via hitting the road, like the Beatles.

Although we often appreciate the work of genius, we rarely stop to consider how hard they still had to work behind the scenes to reach and maintain the level of skill and proficiency they did. No matter what level of accomplishment you find yourself at, a beginner daunted by the enormity of the task ahead, or a consummate pro already world worn and weary, practice is inescapable.

There is no magic pill to mastery except time and perseverance, and always remember, as the saying goes, the master has failed more often than the student has even tried.