What Every Modern Producer Can Learn From Boxing

Language
This enlightening tutorial for producers and musicians could be titled "Why practice isn't enough". Instead we found similarities between boxing and music production which are fascinating.

In a previous article I wrote called What every Modern Producer can learn from Mozart, I contrasted the idea of talent with the often overlooked fact that even the greatest of the great have to sit down and do their scales. Like the rest of us, even our geniuses and inspirations have to practice—but what does that mean exactly?

For many, just hearing the word practice can evoke an unpleasant tingle down the spine. It conjures memories of dull afternoons at a piano in some old crone’s house soaked in mothballs, or Paganini being tortured on a violin by a neighbour next door. If practicing isn’t annoying you, it’s probably annoying someone else, right? It carries stigma and weight and is quite often the opposite of inspiration and motivation.

It is an inescapable fact though, that “practice makes perfect”—well no wait, actually it doesn’t.

Yeah, you read that right. It is the most misleading information to hit a learning musician’s ear after shepard tones and the McGurk effect. The cold, hard truth is that practice is not enough. Oh, it’s necessary, but it’s not sufficient.  Furthermore, there is a word missing from this old adage, and the word is corrected.

If you learn and repeat bad habits you just enforce those, and it is very difficult to change them later.

I am not a trained fighter, but this analogy hit me (literally) when I was learning a few boxing tips from a friend who is a trained K2 kickboxer. It’s a leftfield approach on practicing your music skills, be they DJing, producing, singing, or playing a musical instrument, but we really can learn something from boxing.

One Cannot Improve As A Fighter By Only Shadow Boxing

Shadow boxing is the equivalent of sitting at home and plucking away at the guitar endlessly, or noodling in your DAW making another loop. This is probably why a lot of young artists feel like they are chasing shadows, or up against a wall all the time.

Shadow Boxing is a great way to stay fit and keep up existing form, but to rely on it as an area of growth and skill building is ill-advised.

Often, with prolonged, uncorrected shadow boxing, bad habits are formed. Mistakes creep in and are reinforced through repetition and they become increasingly difficult to unlearn.

Sparring, on the other hand, is the business. A mock fight that prepares you for the real thing, because it is the real thing, but without the ticket sales and an audience. Being clobbered about the head will expose your weak spots very quickly, and show you how to give as good as you get. There is no greater motivation than hanging out with other musicians who will knock you on your ass, but inspire you to keep on getting back up.

One Does Not Become A Better Boxer By Fighting Weaker Opponents

As an artist your weakest opponent is yourself.

Trying to Improve against your own, personal skill set is like repeatedly punching yourself in the groin; it’s painful, and pointless, and really rewarding when you stop. It also greatly affects your stride, and if done long enough can cause permanent damage.

This is why some musicians and DJs play and study music for years without really advancing a skill set and others become accomplished in relatively short times. Often, the former are in their bedrooms and garages swirling in the same grooves and licks and ideas, while the latter are out on stage, or are involved somehow with other musicians from as early on as possible, and they are constantly being exposed to new techniques, advice, criticism and feedback.

But, there is a caveat—you can only be as good as the company you keep. You see the kick boxer friend I mentioned earlier? He was a bit of a dirty fighter, so I ended up learning and practicing a few moves that could end a bar fight in seconds, but would probably land me in jail as well, so always be aware of what it is you are actually learning as you go.

In other words, be careful not to learn someone else's bad habits, you might come to regret it.

Of course it is possible to become proficient at an instrument, or mixing on decks, if you practice endlessly at home, I am not saying it isn’t, it’s just that it doesn’t really work in the long run if you desire to be more than just proficient in your bedroom.

Many a time I have tried to work with what is called “A Practice Room Monster” a musician who is technically fantastic, but has the social skills of a caveman, and terrible stage presence. Jack Black’s character in the movie “School of Rock” is a prime example of this kind of musician, a flashy shadow boxer with no real skills except flamboyant moves and fancy footwork.

Put guys like this in an actual ring and they’re clobbered in seconds.

A Coach Or Mentor (Of Some Kind) Is Essential

We’ve established that corrected practice makes perfect. Professional or expert guidance goes a long way to motivating and cementing “good” musical practices at all levels of music from production to instrumentation and recording.

But where does this magical correction come from?

Invest in an online course, go to a dedicated school, take private lessons, watch tutorials online, join or form a band, intern at a local studio or broadcast station, socialize at a local music venue or music shop, join a forum, go to workshops—these are all ways to meet like-minded people who have the potential to inspire and push you to new levels. Even admiring a particular musician or producer counts. Analyze their work, read up on their techniques, watch interviews with them, always push forward! 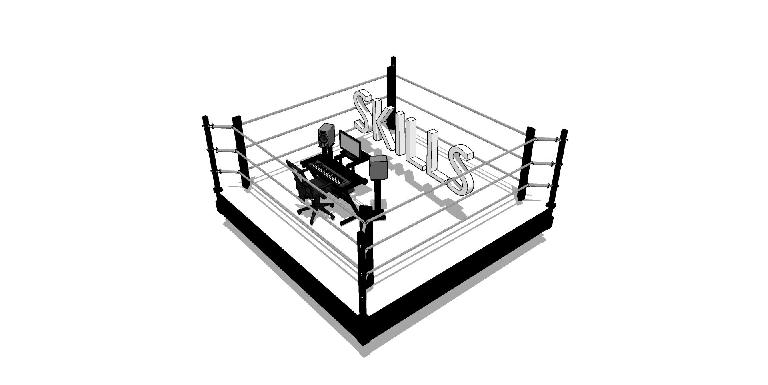 So? How Is This All Related To Practicing Music Again?

Practice is part, “Oh hell, I have to go through my scales, again!?”, but it is also part “I’m having fun messing around with these awesome musicians/DJ, this can’t possibly be learning and practice!” — but it is.

The idea is that going out and doing it becomes part of the practice itself. Oh, you’ll still have to sit down and do scales until your fingers bleed, but learning how to play music with other people, bombing an amateur gig, rocking a local pub, hauling gear in and out of vans at 3 a.m., or arguing with bar management over how many free beers are appropriate in lieu of rent money, is as important as learning how to play with—er—by yourself.

It all leads up to being ready to step into the main ring for a real world bout, to give as good as you get, and who knows,  even get a shot at the title one day—but shadow boxing alone will never get you there.

Remember, shadow boxing at home, doing scales and learning notation is necessary, but without applying what you learn to a real musical or creative environment, i.e., sparring, you are jumping rope holding only one handle. I think Mozart said that...

Filobot
Great analogy Shane! At first glance, the two disciplines seem worlds apart, but there are universal constants that hold true for improvement in any sport, creative endeavor, etc. Change and external challenge facilitate growth.
BWB
Thanks for the great advice! After getting an album on iTunes in 2007 (Tha breakfast club "Today's Specials) my band broke up. I have been shadow boxing ever since trying to do it on my own. Your analogy has opened my eyes. Time to take some punches in 2016 cus "it's never too late to be what you might have been." Happy holidays brother!