Language
Complete with a library of presets from industry leading artists and engineers, the new Waves H-Reverb is aiming to be the very best reverb plug-in around... and it's available now.

At Musikmesse 2015 we got an interesting demo of the new Waves H-Reverb plug-in before it was released. You can check this video out here.

The FIR engine that powers H-Reverb lets you shape and customize the reverb decay envelope beyond the standard linear forms, resulting in perfectly gated, real reverse, and dense reverb tails that don't muddy up the mix. Taking things one step further, H-Reverb incorporates Waves' advanced analog modeling along with a drive control, offering signal behavior that until now was found exclusively in high-end hardware reverb devices. This unique design also enables input drive, a technique favored by many top engineers. 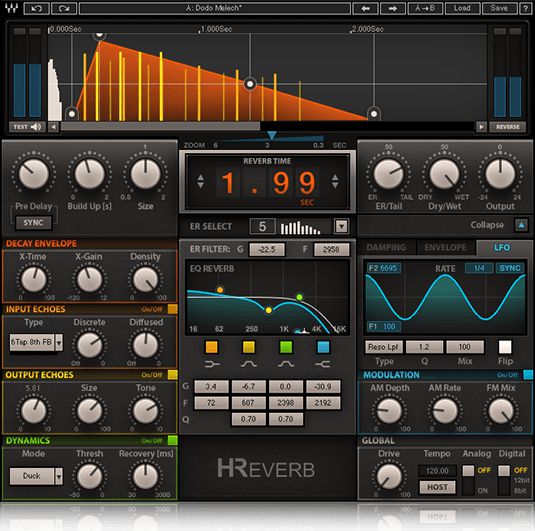 To top it off, H-Reverb includes an impressive library of artist presets from the industry's leading mixing engineers (including Toni Maserati, Brad Divens, Daniel Green, Dave Darlington, Dave Stagl, James Ebdon, Ken “Pooch” Van Druten, Kevin Madigan, Pete Keppler, Ross Hogarth and Yoad Nevo, to name just a few). Their personal settings may be the perfect space you're looking for, or simply the perfect point to start from.

Mick Olesh, Waves EVP of Sales & Marketing, states, “Waves is extremely excited about releasing the H-Reverb. We went to great lengths to make this the most comprehensive and best-sounding reverb plugin possible, incorporating invaluable input from industry-leading mixing engineers.”