Language
Modeled on the classic 1073 console EQ and mic preamp module, the Waves Scheps 73 is turning a lot of heads! Check out what Waves Audio have to say about it and watch the video too.

Waves Audio is now shipping its Scheps 73 plugin. The Waves Scheps 73 is a colorful 3-band EQ modeled on the classic 1073 console EQ and mic preamp module and developed in association with world-renowned mixing engineer Andrew Scheps (Adele, Red Hot Chili Peppers, Black Sabbath, Lana Del Rey, Metallica, Jay-Z). Using innovative technologies to model the acclaimed Marinair transformer, Waves has meticulously captured all the sonic characteristics of the 1073, including its harmonic distortion whose overtones were tweaked to perfection by Andrew Scheps himself, resulting in beautiful and authentic saturations.

Scheps notes: 'The 1073 is pretty much the gold standard for mic pres and EQs. This plugin captures all of the character of the original, while adding a great extra midrange band from the 1078.'

The Scheps 73 plugin features fully interrelated bands, including a fixed 12kHz high-frequency band, switchable low and midrange bands with cut and boost controls, and an 18dB/octave high-pass filter. Adhering to the original specs, the Scheps 73 adds the Waves MS matrix to let you apply different equalization to mid and side stereo content. And to top it all off, a little-known 10kHz midrange band discovered in the original 1073 schematics but operable only on the rare 1078 channel strip has been modeled for the first time and incorporated into the plugin. 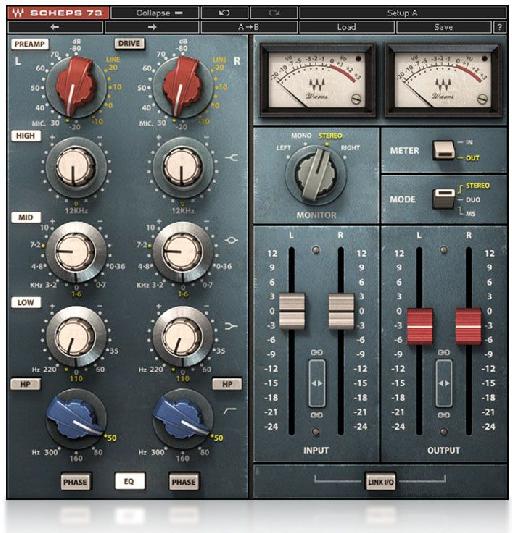 Scheps adds, 'Being able to EQ in MS mode opens up a whole new range of possibilities for my workflow. I think about EQing in ways I never have before with traditional hardware.'

Whether used for recording, mixing or mastering, the Scheps 73 lets users enjoy all the warm tones of a fabled piece of studio hardware, all in-the-box!

Special introductory price for Native only: $99.