Waves Audio is proud to bring you the legendary, beautiful, and inimitable smooth vintage compression tone that made its way onto every Beatles recording.

Waves refer to RS124 as the holy grail of compressors. It certainly was a staple on many popular Abbey Road recordings and now can be part of your mixing and mastering studio toolbox too.

Here's what Waves say about the Abbey Road RS124 in a nutshell:

Few pieces of gear define music history as the RS124 does. The custom-built RS124 compressors were the secret weapon of Abbey Road engineers during the ‘60s – favored by Geoff Emerick for punchy bass sounds; by Ken Scott for lush guitar treatment; by Norman Smith for lightly gluing the entire rhythm bus. RS124 was also a popular choice for mastering in Abbey Road’s cutting rooms.

The RS124 sound is especially famous for the thick, creamy bass tones it produced on Beatles classics such as “Rain” and “Come Together.” Abbey Road engineers would typically push the input of the RS124 deep into 15-20 dB of gain reduction, producing wonderfully lush results on numerous sources.

Today, Grammy®-winning pop/R&B and hip hop engineer Tony Maserati consistently applies RS124 tones to his vocal tracks, including those of Beyoncé and Alicia Keys, to supplement their stunning voice qualities. 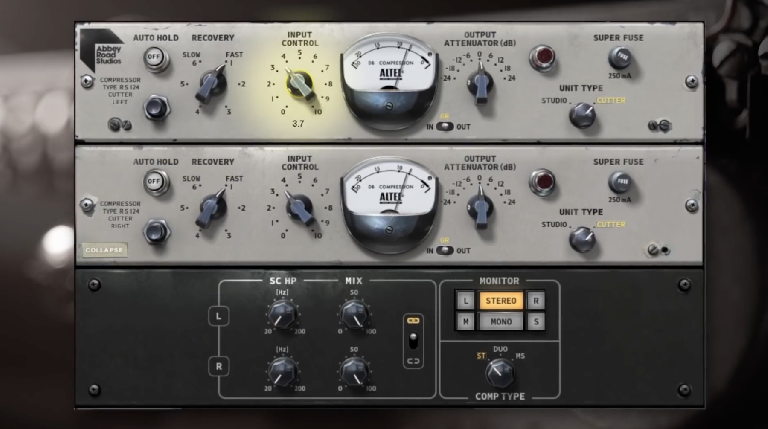 The RS124 is a feedback compressor with a variable recovery. Want it to become more aggressive? The included “Super Fuse” mode matches release time to attack time, creating a brutal compression character that sounds like it’s “fighting against itself.” Try this on your drum bus for complete room destruction.

The legendary RS124 left a huge sonic fingerprint on the Abbey Road ‘60s sound. Since its rediscovery in the early 2000s, this important, rare and unique compressor in still being used at Abbey Road Studios today. Now, its one-of-a-kind sound is yours.